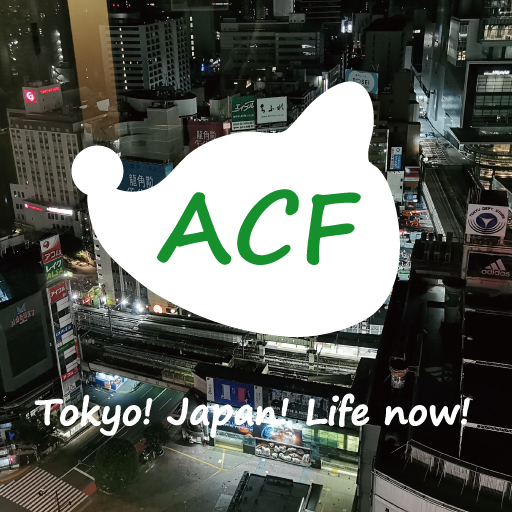 (*This is a separate article from the summary article on January 7th!)

It is a summary of individual articles after a long absence!

The state of emergency has finally been reissued …

In the end, it was announced only to 1 metropolitan area and 3 prefectures.

“Does this really stop the spread of the infection?”

②Request to shorten business hours to entertainment facilities such as restaurants, movie theaters, and sports clubs

* Delivery to home and takeout are OK

③Refrain from going out unnecessarily after 8 pm

④Limitation on the number of people in the event

*For universities, they plan to request effective combination with online classes.

⑥Employment adjustment subsidy continues to be up to 15,000 yen per day

* There is a usage record of 500 billion yen

* “The unemployment rate in Japan is 2.9%, which is the lowest level in the world.”

(Prime Minister Suga is proud of this)

⑨ “The number of infected people is suppressed in areas where requests for shortening business hours are made early.”

”Currently, the center of infection is 1 metropolitan area and 3 prefectures.”

⑩Amendments to the Special Measures Law should be made to be enforceable, such as penalties, as soon as possible.

⑪Vaccination is targeted for late February

⑫A subsidy of 4.5 million yen will be added per bed to hospitals that have increased the number of beds compatible with COVID-19.

⑬Half of the infected are young people in their 30s or younger. Even if you don’t get seriously ill, the infection will spread from there, so I would like to ask you to take action to protect your precious person’s life.

⑭Suga “I want to do something in a month rather than discussing the extension now.”

⑯Osaka and Aichi are not yet in a state of emergency.

▽ Stores over 1000㎡ that run a sales business.

▽ The part used for meetings at hotels and inns.

The reason why the list of ↑ is also targeted is that it is stated as follows in a treatise submitted to the British scientific journal “Nature”.

■Places most relevant to the spread of infection■

Restaurants and hotels seem to be completely NG …

(*Conversely, convenience stores, gas stations, and pharmacies have the least association with the spread of infection.)

“It’s difficult to achieve in a month, but if everyone works hard, it’s possible to go to stage 3.”

“The guideline for canceling the state of emergency in Tokyo is 500 infected people a day.”

The suspension deadline is extended from January 11th to February 7th

・Even though a state of emergency has been issued, 11 countries with preferential business traffic (exemption from quarantine, etc.) will continue for the time being, saying that the impact will be limited.

For 11 countries with preferential business traffic (exemption from quarantine, etc.), it has been decided to completely restrict foreigners from entering Japan from January 14th until the cancellation of the state of emergency.

(* It seems that foreigners who have “special circumstances” such as funerals and childbirth of relatives will continue to be allowed to enter the country.)

However, it seems that the following two will continue to be recognized, so I can’t say how effective they are.

・Re-entry of foreigners with a status of residence

And the border measures have been strengthened a little and changed as follows.

・Pledges such as 14 days of isolation at home or accommodation when entering Japan, no use of public transportation for 14 days, storage of location information, etc.

・ In case of violation, name will be announced, status of residence will be canceled, and deportation will be considered.

・In case of violation, it may be kept in the accommodation facility prepared by the quarantine station.

It may be a good way to monitor location information for 14 days only.

(If the system can be operated properly …)

That’s all for the current breaking news …

The guideline for canceling the declaration is 500 people…, which is still too many, right ?!

And it seems that there is no compensation for those who are “already unemployed” or who have “decreased income” in terms of economic measures. ..

It seems that the fine for a restaurant violation is about several hundred thousand yen.

And another penalty is the publication of violated restaurant…

On the contrary, everyone may go to drink along the list of penalty restaurants… It’s such terrible situation like that…

Isn’t the government looking at the situation in Europe?

It was such information of emergency declaration recurrence order …

Oh, I have one more information!

Regarding the delivery service that you’re worried about …

Yamato Transport, Sagawa Express, and Japan Post will handle the delivery as usual!

In 11 areas where the state of emergency is being issued, the reception hours of Yamato Transport’s sales offices will be shortened to 8:00 pm! (Until the declaration is canceled)

(* Limited to stores that were open until later)

The government said at a press conference that “schools do not request school closures!”, but…

in order to reduce contact between students, it is said that the number of students who go to school in a day will be reduced to two-thirds!

※* Tokyo is planning to request the last train to be advanced, but there is no noticeable movement yet …

Anyway, it doesn’t matter if those stops the spread of the infection!!

As you probably already know, it has been decided that not only 1 metropolitan area and 3 prefectures (Tokyo, Kanagawa, Chiba, Saitama) but also Kansai and Tokai will include a state of emergency!

Initially, only the Kansai 3 areas (Osaka, Kyoto, Hyogo) were planned to be added, but the Tokai 2 areas (Gifu, Aichi), the Kanto 1 area (Tochigi), and Fukuoka are now included! 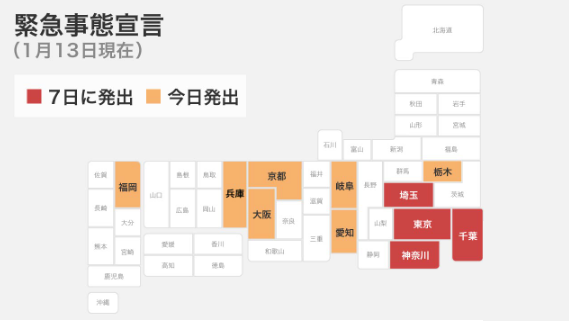 The contents are the same as in 1 metropolitan area and 3 prefectures, and are as follows.

・70% reduction in the number of employees attending work by teleworking

・Limited number of people for the event

However, since the 1 metropolitan area and 3 prefectures where the state of emergency has already been declared are in such a situation (many people, especially young people, are not refraining from acting), it is unclear how meaningful it is …!

I think the Diet will start discussing penalties around next week, so I’m looking forward to it …

* By the way, I was wondering “Why did Fukuoka suddenly become a target?”

(* Since it is the intention of the government as of January 13, there is a possibility that other prefectures will be added in the future.)

“The country is thinking of containing the spread of the infection in a short period of time, and is not thinking of further designation, and was told that “This is the last ship.” “

“I have not requested a state of emergency.”

And the information on shortening the last train of trains in the Kanto region has also been updated!

The change in operating hours on all routes seems to be from Wednesday, January 20th, so it looks like follows!

For me, who only uses the last train in an emergency, so last train is my “last hope” to return to my “loved house” (lol), so I’m honestly relieved that the time wasn’t too short … Howeve, on the contrary, I’m a little worried about whether these 10 or 20 minutes are effective…?