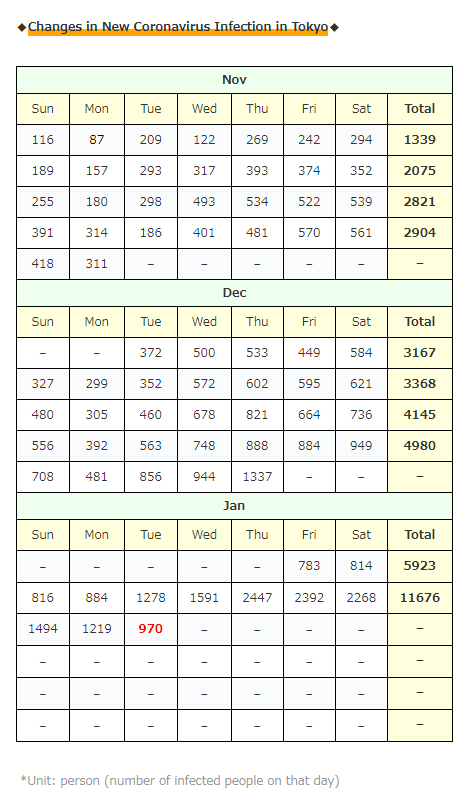 * Has it passed the peak?

The number of newly infected people in Tokyo seems to be small at 3 digits after a long time, but since the end of consecutive holidays is always “abnormally” small …

・Infection at a dinner with friends and acquaintances [34] people

“* [Taito Ward] The ward staff of Taito Ward Hospital was infected. There were no close contacts. The hospital will continue medical treatment. = Announcement by the ward.”

・I couldn’t confirm the information today …

* Bringing in samples from outside of Tokyo [60 cases]

・Young people who had a drinking party with about 20 people

・A young man who was karaoke with about 20 people

・Social gathering at a private home hosted by the company

*Among the infected people counted today, there are [14] cluster relationships, including the above.. (Add up to 2 people) 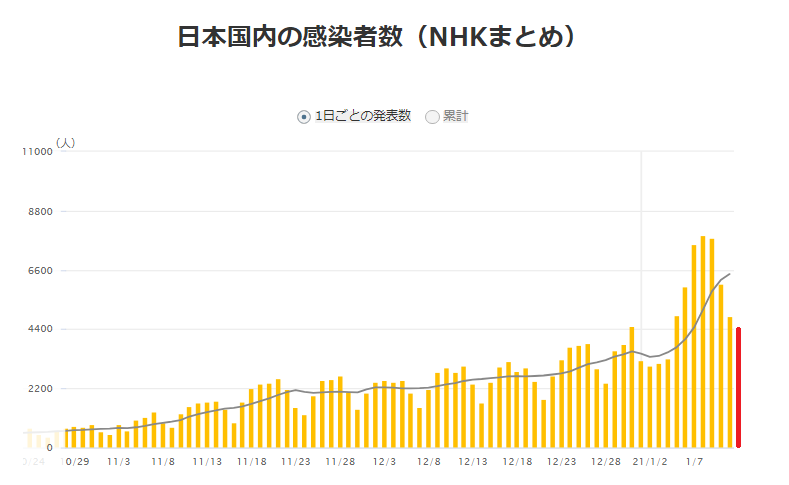 The holidays are over!

The end of the year, the New Year, and the three consecutive holidays are over, and what happens to the spread of infection from here is the real thing!

(Because we will return to our daily life from here)

In this article, the result of an interview with a person commuting around Tokyo Station on the morning of the 12th was posted!

“The train was as busy as usual, and I didn’t understand if there was a state of emergency.”

Female office worker in her 40s

“There are surprisingly many people on the train, and when there is a delay, the impression is that it is crowded.”

Male office worker in his 40s

“The train this morning hasn’t changed much from last week.”

Actually, it’s exactly the same as the impression I used on the train at work today…

major hotel chains are not closed at all,

and retail stores and restaurants are quite open,

It seems that many stores close as requested by the government …

As you may already know, those who live and work in the Greater Tokyo Area,

Major companies such as department stores, commercial facilities, and hotels are following the request “because they don’t want to be hated by the government”,  so even during the spring emergency line, they were obediently closed, but this time the government is saying “it’s okay to open until 20:00”, so they’re obediently following it.

Many companies and shops were closed during the Spring State of Emergency.

Therefore, even if people in the city do not obey the government’s request, large companies will have a “flow” to obey, so “strong request” may be necessary.

When I live in Tokyo, I get that impression …!

It’s been a bit long, but the current situation in Tokyo is like this, so it’s a feeling that there is no self-restraint mood.

Meanwhile, in Yokohama City … Yokohama City Hall staff had a drinking party on the last work day at the end of the year, and a cluster occurred …

And as you all know,

It seems that an emergency declaration will be issued tomorrow in the three Kansai regions (Osaka, Hyogo, Kyoto)!

Prime Minister Suga announced his policy at the LDP board meeting on the morning of January 12th today!

It seems that the period is until February 7, which is the same as the Kanto 1 metropolitan area and 3 prefectures, but how effective it is unknown because Kanto is in such a terrible state …

The news rushed tonight, but tomorrow 13th, the emergency declaration will be issued not only in the Kansai 3 region (Osaka, Hyogo, Kyoto) but also in the Tokai 2 region (Aichi, Gifu)…!

*Information will come out tonight and will be announced tomorrow, so I will introduce tomorrow together!

And in such Kanto …

From today, requests for shortening business hours until 20:00 in “3 prefectures” (Kanagawa, Saitama, Chiba) of “1 metropolitan area and 3 prefectures” will spread to all restaurants and throughout the prefecture!

(For all restaurants, not just restaurants that serve alcoholic beverages)

Infections are widespread not only in major cities but also all places in the three prefectures, so it would be nice if this could stop the spread of the infection …!

Japan is already in a state of “We have to wait for the vaccine because the state of emergency seems to be meaningless …!” but

there was an easy-to-understand article about the current situation of vaccination and side effects, so I will summarize it for a moment!

As you all know, some people have an allergic reaction called “anaphylaxis” when vaccinated …

(* In the case of influenza vaccine, the ratio of 1.3 cases per 1 million times)

②17 out of 21 people have allergies to medicines and foods

▼ The slowest person-two and a half hours later

⑥Some of the 21 people were hospitalized, but all have recovered.

・ 83 people showed an allergic reaction that was not anaphylaxis within 1 day after vaccination.

→56 people have allergies in the past

・85% of the symptoms appeared within 30 minutes

It seems that If there are side effects, it’s about two and a half hours or less!

It’s unlikely that you’ll suddenly develop symptoms at night after you get home, so it’s a little reassuring! Lol