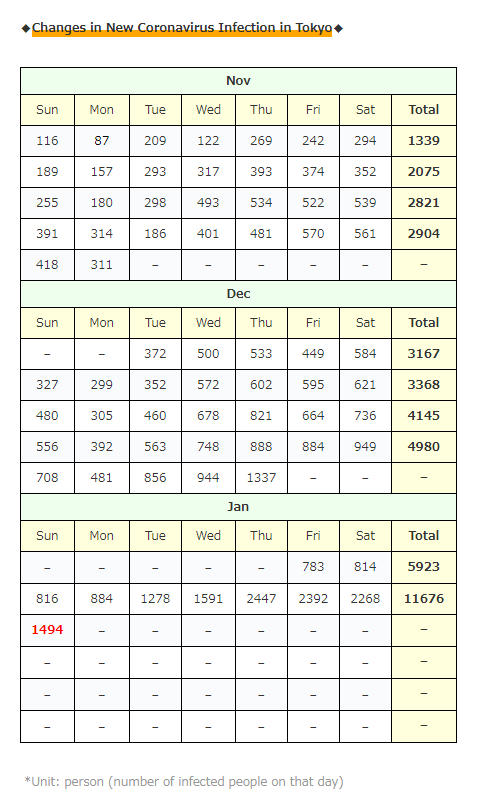 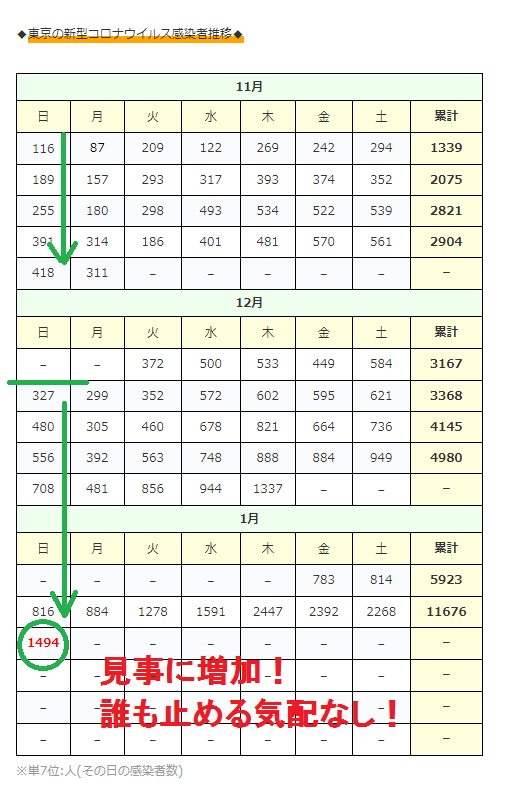 (*Greatly increased!No one tries to stop!)

Looking only at Sunday, it has been increasing all the time, except that it decreased for some reason on the first Sunday of December.

・Infection at a dinner with friends and acquaintances [46] people

* Infection in the facility [43] people

* Bringing in samples from outside of Tokyo [55 cases]

・Private medical institutions in the prefecture

*Among the infected people counted today, there are [7] cluster relationships, including the above.. (Add up to 1 people)

・Restaurant with emtertainment at night “Pub Irene” in Narita city

・New Year party hosted by restaurants in the Iburi region

*Among the infected people counted today, there are [12] cluster relationships, including the above.. (Add up to 5 people) 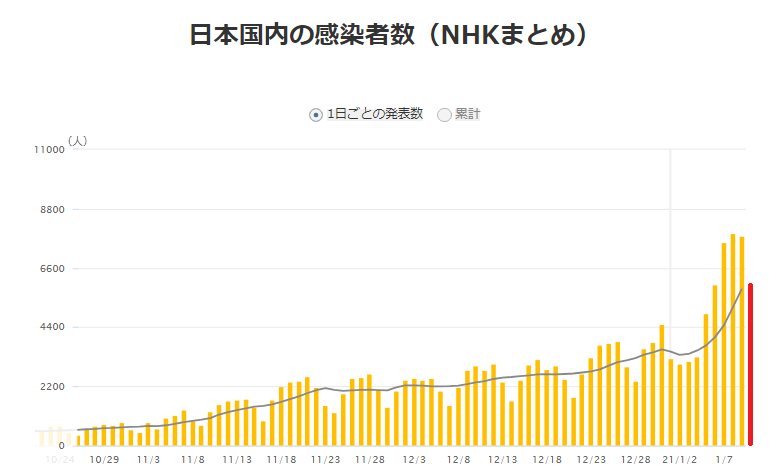 If you take a quick look at the details of each prefecture, you can see how they did not refrain from the year-end and New Year holidays…

As you all know, the request to the governments of the ３ Kansai regions (Osaka, Kyoto, and Hyogo) to reissue the state of emergency seems to have had surprising results …!

As of yesterday night, there was the following news.

(Leader of measures against new coronavirus in Japan)

“We shared the recognition that it was a difficult situation with a state of emergency in sight.”

“We will listen to the opinions of experts and consider them.”

①Request to shorten business hours until 8:00 pm at restaurants

②Request to refrain from going out unnecessarily after 8:00 pm

It’s almost the same as the “state of emergency” …?

I think like above, but he want to say “before imposing responsibility on the government, do you do what you should do first …?”

And regarding that, Prime Minister Suga appeared on a TV program this morning and said this!

“I know it’s a tense situation, of course, but a subcommittee expert said they wanted to wait and analyze for a while. We need to see the situation for a few more days.”

Apparently there are too many decisive differences in thinking.

People such as the government, subcommittees, and the governor of Tokyo

“No, we will not take measures until the numbers come out.”

It’s too late after the “infection explosion”, so I think “preventive measures” are the most important than anything else, but politicians (is there a liability issue or bashing from each industry?) seems to be only going to take measures “against what has happened.”

And Former Mayor of Osaka, Toru Hashimoto, responded to this government’s response by saying, “I only feel that they are running the nation by intuition.”

It seems that the grounds and intentions cannot be seen at all from the perspective of experts who are familiar with the politics and the law like him …!

The Asahi Shimbun pollster seems to have the following results.

Q.If you are infected with COVID-19, are you more worried about neighbors eyes than your physical condition?

“I feel guilty (going out), but I don’t limit my actions.”

After the interview, he goes to study at a cafe with a friend …

“I didn’t go out when I declared the state of emergency last time, but this time the store is open and I came to play because I thought there were few people because of the declaration.” 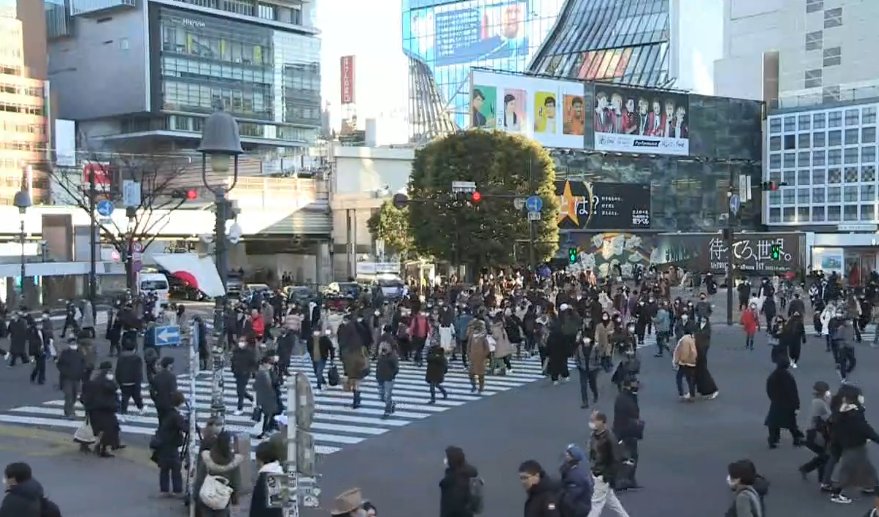 It’s a little less than usual, but I don’t believe this scene is in the state of emergency .

It’s the third day since the reissue of the state of emergency, but the public voice is like this …!

A quick summarize at the story of medicine …!

Remdesivir, the first COVID-19 drug approved in Japan, (that various international organizations such as WHO say “the drug is ineffective”) will be expanded from severely ill to moderately ill!

It seems that the data from the pharmaceutical company was submitted and the effectiveness was confirmed, but we think, “Does it work? Doesn’t it work? Which one?”, ritht?

((The answer would be “used in the medical field = not completely ineffective”.))

COVID-19 vaccination in Japan seems to be for people over 16 years old!

Pfizer’s vaccine, “of course”, seems to work for mutants too!

There was news that “it is unknown whether it works for mutants”, so it’s safe!

And the duration of the immune effect of COVID-19 is … It seems that it will last for 8 months!

However, this is the story of the immunity that infected people have after recovery …

I hope the COVID-19 vaccine has the same effect!

Since clinical trials and inoculation have just begun, it will take some time before the results come out …

Bad news and good news are mixed every day and our feeling looks like a roller coaster! Lol

You may be frustrated by the public and the news, but don’t be afraid to take precautions!