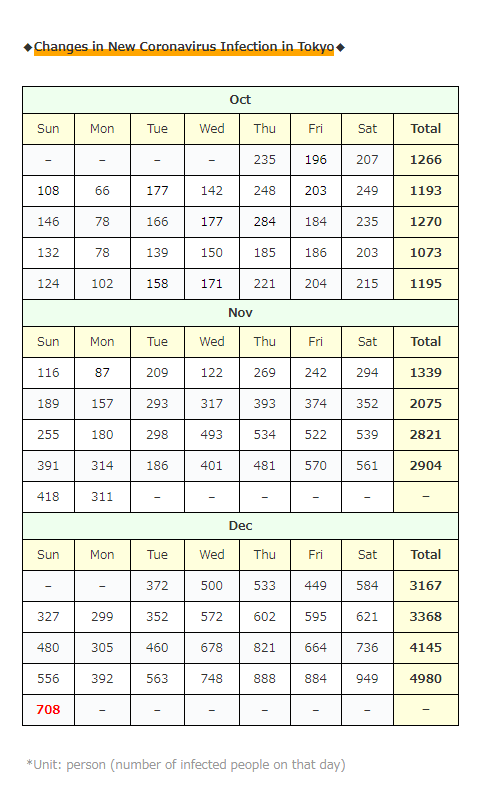 Where is the 600-person range? 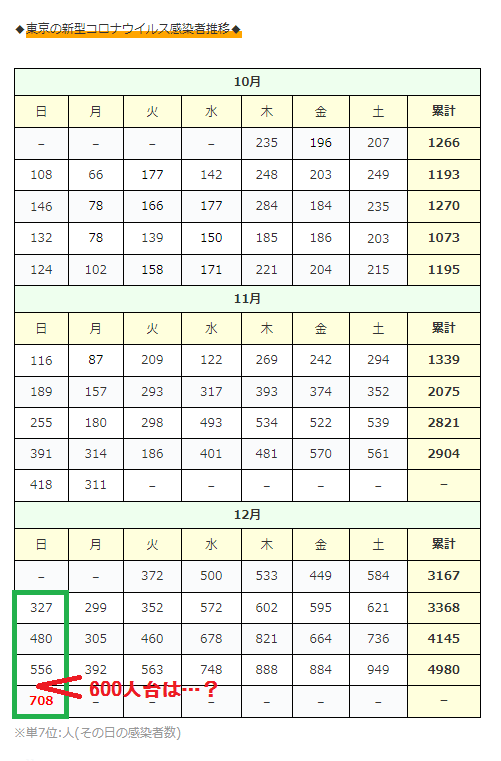 No one on the side of the countermeasures is willing to stop the spread, so instead of stopping, acceleration continues … crying

・Infection in the facility [56] people

* Infection in the facility [56] people

* I couldn’t find any information about outbreaks today …

・Transportation company in the prefecture

* In addition, a man in his 80s who was being followed up as a close contact at home died …(Three people were infected and hospitalized in a family of five)

*Among the infected people counted today, there are [5] cluster relationships, including the above.. (Add up to 8 people)

* Summary of outbreaks related to

the “entertainment district at night in Susukino, Sapporo City

*Among the infected people counted today, there are [14] cluster relationships, including the above.. (Add up to 8 people)

・Restaurants with karaoke in the prefecture 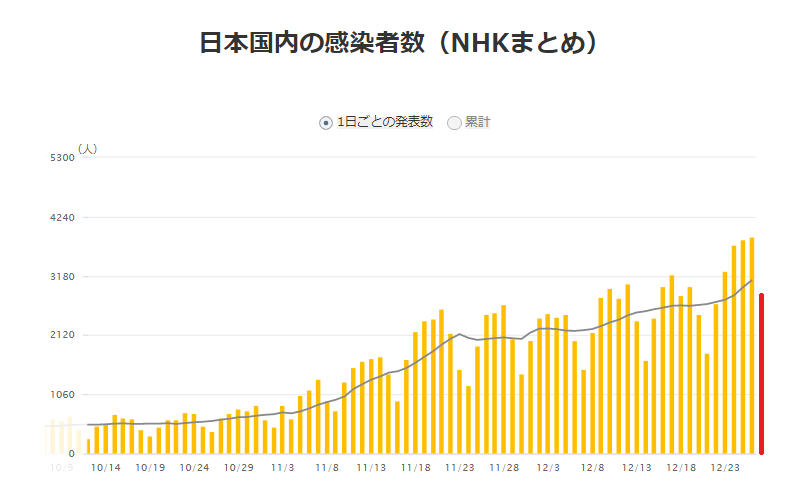 In yesterday’s topic (from the summary article on December 26th), I have summarized the British mutants whose infectivity has been enhanced by 70%!

However, as more and more additional information came out yesterday, I would like to summarize it roughly …!

It seems that this is the country where this “mutant of the COVID-19 found in the UK” has already been confirmed. 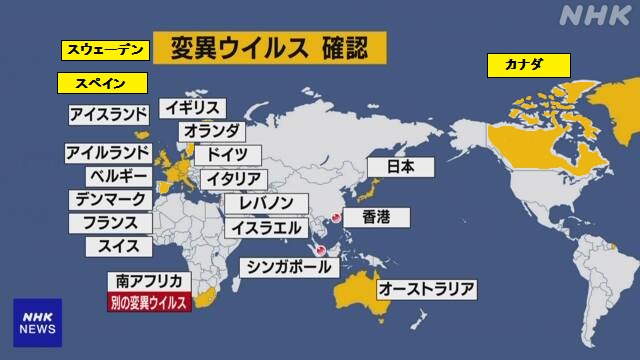 Mutants are likely to come in not only from the UK but also from any country in the world …!

Therefore, it seems that the Japanese government has also responded!

It seems that it has been decided to suspend new entry of foreigners from December 28th to the end of January tomorrow!

It seems that this includes foreigners with medium- to long-term status of residence.

(Foreigners who have already entered Japan are of course OK.)

However, there are some uncertainties about this, as shown below.

②If a Japanese or a foreigner who has already entered Japan makes a short-term business trip abroad, the current “14-day waiting exemption” will be suspended.

(It is necessary to wait 14 days without fail)

③Immigrants from areas where mutants have been found must be tested within 72 hours of leaving the country.

Test is required even when entering Japan.

(From the summary article on November 21st) 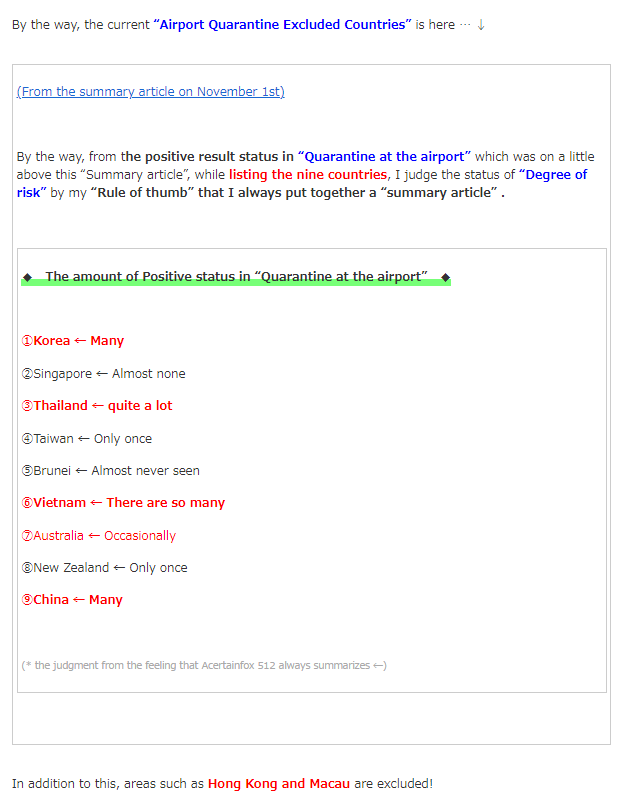 People can enter from areas where mutants have already been confirmed …

And as shown in ②, Japanese people can enter and leave Japan if they wait 14 days after returning to Japan…

The most scary and problematic thing is that

In the last few days alone, Japanese immigrants have slipped through the “airport quarantine” and found British mutants in the country, but it’s almost the same as before …

From the news yesterday December 26th

How it was discovered that an aircraft pilot (30’s) and a woman in his family (20’s) who returned from the United Kingdom were infected with the mutant.

Return to Japan on the 16th

→ Because it is a pilot, quarantine exemption

→ On the 21st, symptoms such as coughing appeared and infection was discovered.

→ Women are also hospitalized from the 24th

* There are 3 close contacts, 1 is negative, and 2 are waiting at home.

↑ Are there really just only 3 rich contacts …?

And even if it is not “rich contacts”, it takes more than a week from returning to Japan (16th) to hospitalization of a woman (24th), but what about going out for shopping or moving by train?

Maybe this mutant has already entered the country (at least Tokyo), right?

So, although the tightening of immigration regulations for this one month will be effective to some extent, but it seems that it will not be as effective as we think.

The number of newly infected people is renewing the highest number every day, but it seems that the government is not yet willing to take proper measures.

… It has become a dark topic (Dry laugh)

Is it okay to drop another fuel(of angry lol) on everyone? !! Lol

Minister Akabane of the Ministry of Land, Infrastructure, Transport and Tourism, who has jurisdiction over the “Go To (Travel) Campaign,” reiterated that “Go To Travel should be resumed on January 12th.”

He also said, “We need to discuss it together at the January subcommittee,” but it’s strange to be able to say that in this situation (although the media asked me to speak)!

There may be expectations from the travel industry, but …

And some small topics …

Japanese Government said “Regarding the revision of the New Coronavirus Special Measures Law, we will submit a bill to the ordinary Diet session next year to accelerate the examination.”

There is a feeling of “speedy response from this news”!

You’ve already been told you need it from July, right?

At that time, you said “new coronavirus (COVID-19) infectious disease” is over and then we will discuss the revision. “

What have you been up to?

A clerk of the Tokyo District Public Prosecutor’s Office in his 20s was infected with the new coronavirus (COVID-19) and was traveling to Fukuoka by highway bus During quarantine at home …!

I don’t know the circumstances, but I wonder if this new coronavirus is recognized as “just a cold” so that they can easily move outside even though there is possibility to kill the career by themselves…

It may be an act of belief that “I’ll definitely kill anything in my career …!”

I really think every time I see this news, how can I end this new coronavirus …

Even on Sundays, nearly 500 people have increased …

Mr.Toru Hashimoto always speak what we want to say!

“The governors of the whole country pushed the suspension of the Go To (Travel) campaign to Prime Minister Suga without deciding on their own.”

The governors don’t like being criticized by the local business community, so the governors other than Osaka and Hokkaido didn’t do anything, saying “what the country should decide” …

Is there anyone who has a sharper mind and ability to act than them?!