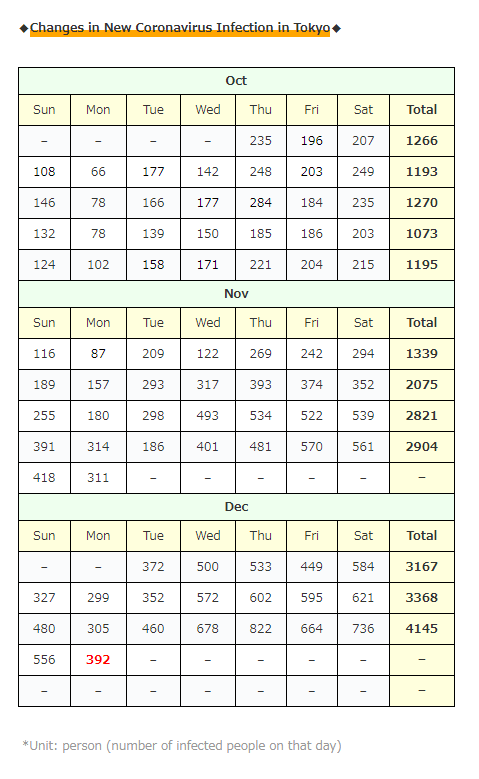 Even though the number of newly infected people in Tokyo is in the 300s today, I feel completely paralyzed even for a moment, saying “Oh! Today is small!”

If I think about it calmly, the fact that even “Monday, the least number of infected people in a week” is likely to exceed 400 people is too scary …

・Special nursing home for the elderly in Chofu city

* Bringing in samples from outside of Tokyo [35 cases]

*There are [3] cluster relationships (Add up to 3 people)

・ Facilities for the disabled in Kitakyushu City

*Among the infected people counted today, there are [8] cluster relationships, including the above.. (Add up to 3 people)

*Among the infected people counted today, there are [3] cluster relationships, including the above. (Add up to 1 people) 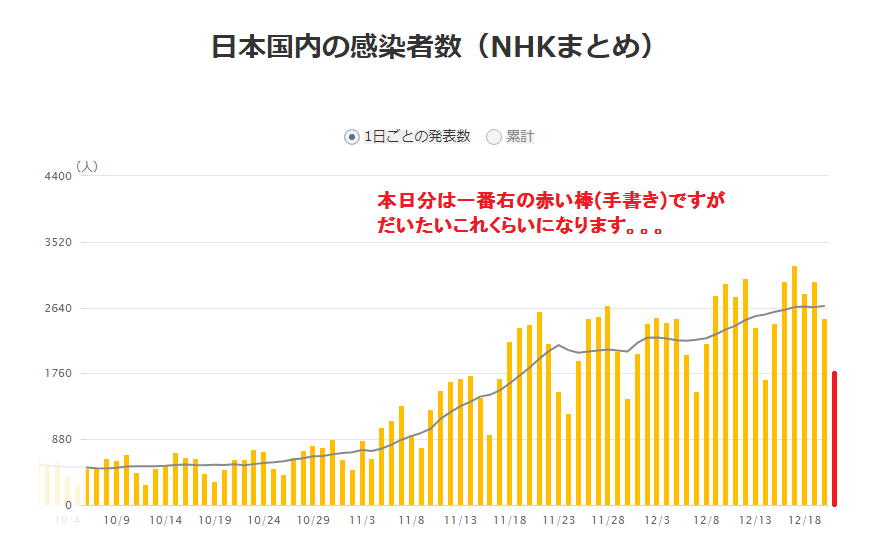 The vaccine situation in the United States is steadily progressing!

This time, the permission to use “Vaccine under development by Johnson & Johnson (+ Janssen)” may be available in January at the earliest!

The third type of vaccine! ??

America is too strong … (in a good way, of course! Lol)

The United States, the savior of humankind, is in the same situation as Japan, or even worse than Japan.

・In Los Angeles County, where Los Angeles (LA) is located, the number of infected people per day exceeds 10,000 every day.

→Calculation that 1 in 17 people is infected in LA County

・In the entire United States, one person died in the COVID-19 every 33 seconds

It seems that they have to inoculate a large scale as soon as possible …!

Yesterday, there was an online exchange of opinions with the National Governors’ Association … but, is this topic okay to go through? ｌol

Because everyone is just as you can imagine … lol

②Prefectures with less infection → Consider the infection situation in the area!

(It doesn’t matter because our prefecture is  few infections, right?)

By the way, yesterday’s infection situation looks like this … 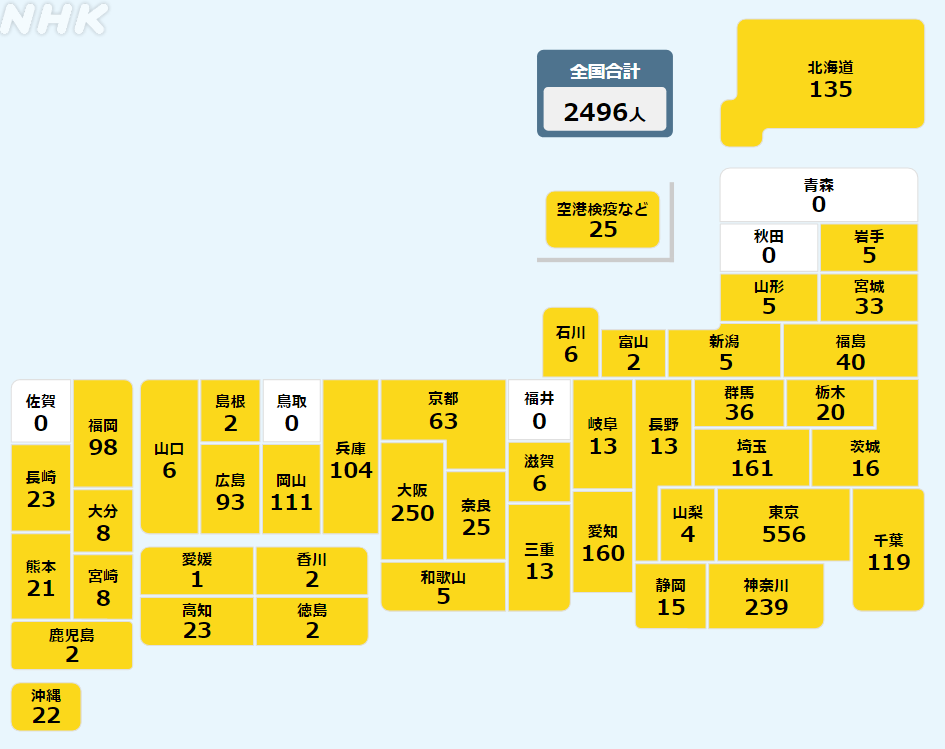 Only about 10 areas can say, “It doesn’t related to us”

In the first place, infectious diseases are not limited to some local governments, but it is not known when the virus will fly unless it ends in Japan as a whole …

By the way, it seems that the number of people on the 19th (Saturday) was like this while saying on TV and news that “the number of infected people will not decrease!

Compared to a week ago … 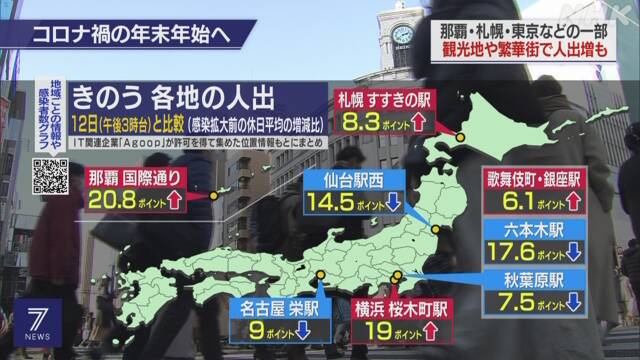 It seems that the number of people in the areas where people work and live is decreasing, and the number of tourist destinations is increasing.

If we refrain from going out and eating out etc, we have to do it together, otherwise it is impossible to control COVID-19 considering the characteristics of “infectious diseases”…

(Because the infection spreads from just one person)

Unfortunately, the data seems to say, “It doesn’t make sense if you don’t regulate it properly!” ..

And the topic of the recently discovered variant of the new British coronavirus mutant (70% increase in infectivity)!

I’ve been doing it on TV and news every day, and about this British mutant that I summarized several times in this “summary article”, it seems that European countries have stopped traffic and freight transportation with the UK …!

We don’t know when it will come to Japan. ..

(This virus can come in at any time,right?)

Japan has to restrict travel as soon as possible and protect itself (Japan) until it understands the situation, but the Ministry of Foreign Affairs of Japan says, “The situation is different from the EU where you can move freely.”

They don’t seem to want to do anything at all …

Finally in connection with that yesterday

(* “It doesn’t seem to be much talked about … The number of positives for’Airport Quarantine’is unusual today … There are now more than 20 more quarantine exempt countries such as China, South Korea, Thailand and Singapore.”)

I tweeted about this on Twitter, but after a day, the content of “25 positive confirmations in airport quarantine” has finally become a hot topic!

By the way, the current “Airport Quarantine Excluded Countries” is here … ↓

(From the summary article on November 1st)

In addition to this, areas such as Hong Kong and Macau are excluded!

(Approximately 2000 people when converted to the Japanese population)

(Approximately 1000 people when converted to the Japanese population)

entry from these countries is unchecked.

Even if it is still good if an infected person enters Japan without checking and the infection spreads around it a little, I think that a mutant of the virus will enter Japan in this pattern, so in that sense absolutely I think we have to prevent it.

Really, please be careful when you go out!

(Tokyo Hospital Association-Association of all hospitals in Tokyo) 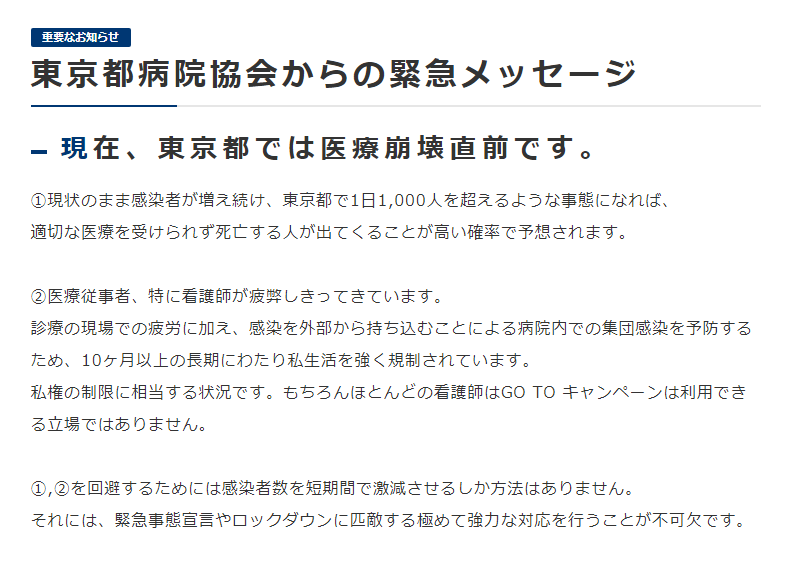 according to the Tokyo Hospital Association, Tokyo is now “On the verge of medical collapse” …

Yesterday in Hiroshima, there was news that “A patient had a chronic illness in his 60s and needed to be hospitalized, but he seemed to be fine, so when he returned home, he died afterwards.”

“Medical collapse” has recently begun to appear not from the general public or news program commentators, but from people in the medical field, so it’s scary…