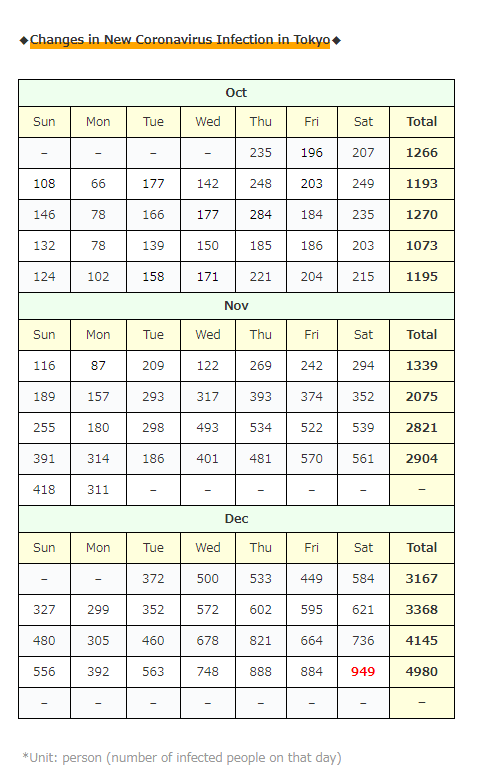 The number of newly infected people in Tokyo passed the 800 level in an instant, and 1000 people were already visible …

And since today is Saturday, I also calculated the weekly total of the usual calendar … 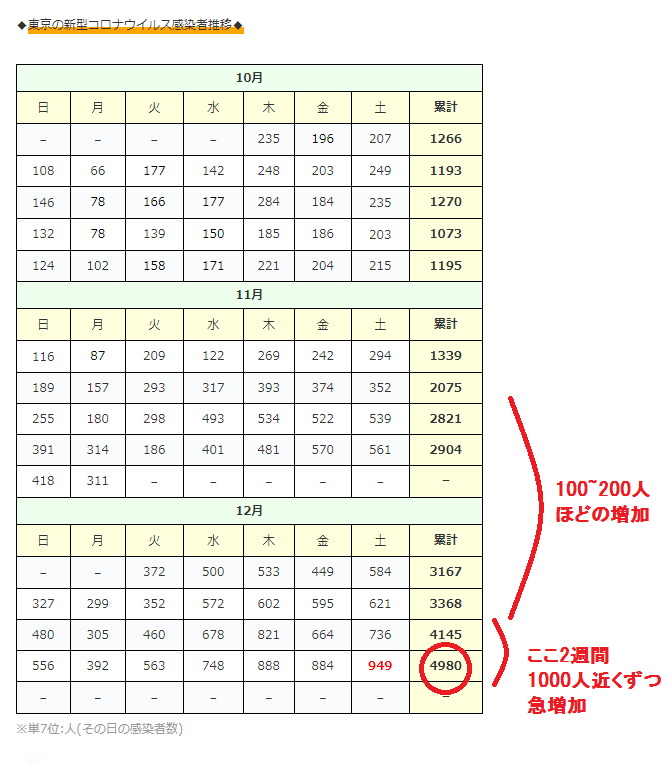 t’s really scary that the government and the governor just want to see the number of people decrease during the New Year holidays and no measures are taken.

・Infection at a dinner with friends and acquaintances [24] people

* On the “Toei Subway Oedo Line”, a total of [21] drivers have been infected or have to wait at home, so it seems that the operation will be reduced to about 70% from December 27th to January 11th.

(It seems that it is difficult to help drivers on other routes because the driving method is different.)

* Bringing in samples from outside of Tokyo [32 cases]

・UFacilities for the elderly in Hiratsuka City

*Among the infected people counted today, there are [7] cluster relationships, including the above.. (Add up to 4 people)

* Summary of outbreaks related to

the “entertainment district at night in Susukino, Sapporo City

*Among the infected people counted today, there are [14] cluster relationships, including the above.. (Add up to 4 people)

* It is said that a cluster has occurred at the office of a company in Hiroshima City, but details could not be found … 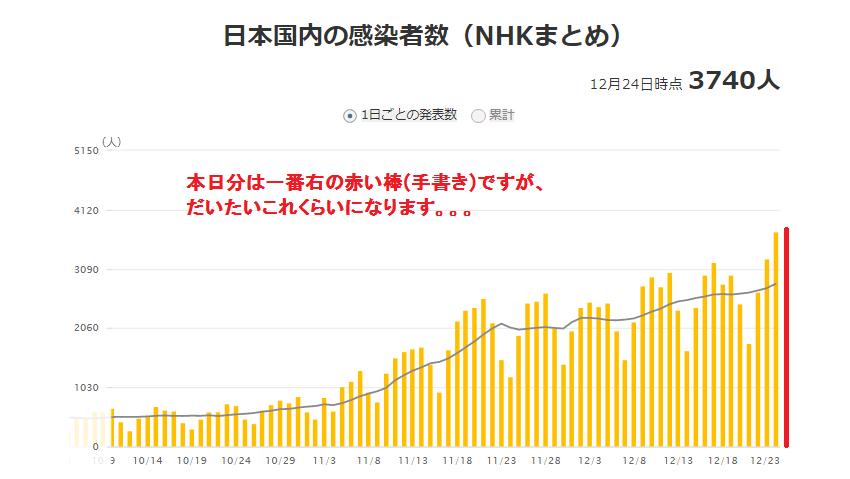 Today, I would like to summarize “a mutant of the new coronavirus (COVID-19) found in the United Kingdom (1.7 times more infectious than usual)”!

It was late last night, but it seems that a mutant of the new coronavirus (COVID-19) was found in five people who returned from England.

It seems that men and women under the age of 10 to 60s are found and said as follows.

By the way, there are actually quite a few other infected people who have returned from the UK.

For example, in Tokyo now…

+ One of the family

It seems that when they returned from England and returned home to live, it was discovered that they had symptoms and were infected a few days later.

It seems that it is under genetic analysis whether it is a mutant from the United Kingdom, but it seems that the possibility of a mutant is somehow high.

So, unfortunately, it seems that this mutant has already entered the country.

Because these returnees were passed through in the “airport quarantine” at the time of their return, and they lived normally for at least a few days …

The following is a rough summary of the statement, “We will further strengthen border measures!”

①After midnight on December 26th, new entry from South Africa will be refused except for Japanese and foreigners with a status of residence.

②Immigrants from the United Kingdom and South Africa wait for three days at accommodations designated by the quarantine station.

④Ask to wait for 14 days even if it is negative

⑤Those who have traveled to Australia where the mutant was found will be newly inspected at the airport quarantine.

“except for Japanese and foreigners with a status of residence.”

In this way, it seems that it is not effective as a countermeasure (↑ I think that most of the users at this time are Japanese or people with status of residence),

a variant of this new British coronavirus (COVID-19) has been found in various countries in France, Hong Kong, and Singapore, but it seems that no countermeasures will be strengthened for that.

In addition to that, the Ministry of Health, Labor and Welfare has put pressure on local governments as follows, even though it has loosened “airport quarantine” by itself.

“Make sure to check the health of people who have stayed in the UK.”

“If an infection is confirmed, take hospitalization measures even if there are no symptoms.”

“If the test is positive, send the sample to the National Institute of Infectious Diseases.”

As mentioned above, they have informed the local government to take thorough measures against the new coronavirus (COVID-19) infection.

No … DO what you should do before that …

And further speaking about “airport”,

It has been rumored for a long time, but finally some railroads have become available from Narita Airport from December 28th …

Keisei Electric Railway’s limited express “Skyliner” will make a vehicle exclusively for returnees and will connect “Narita-Keisei Ueno”, and it seems that 15 trains will operate a day.

“From a dedicated boarding route in Narita”

At Keisei Ueno Station, take a dedicated route to the underground parking lot.”

However, there is a high possibility that they will use the subway or JR after going through that route, right?

I feel that the risk of infection for the general public who passes by them is being neglected because they are only considered for those who travel abroad.

The “risk of traveling in this situation” should be borne only by the traveler, not the general public, who has nothing to do with it.

It has become so bad.

By December 23, the United States had been vaccinated with the new coronavirus (COVID-19) more than 1 million times!

During that time, there were only 6 allergic reactions, and it seems that they aim to supply 100 million vaccines by February!

“Infections that have spread domestically since July have spread from just two clusters.”

In the second wave, it is said that the Tokyo type (a virus mutated in Tokyo) has spread to rural areas, right?

And it is often said that “the entertainment district at night caused the second wave.”

Furthermore, June was also the time when “the entertainment district at night of ​​Tokyo at night was the majority of the number of infected people in Tokyo.”

Well, the mystery just deepens (pretending not to know)

But I want them to identify the cause firmly and take countermeasures “properly”!