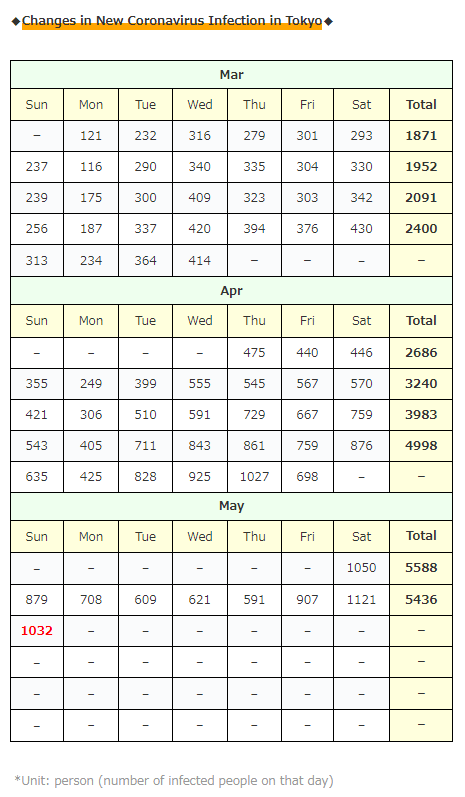 The number of newly infected people in Tokyo has not settled down even on Sunday due to the influence of Golden Week, and even on Sunday it has exceeded 1000 people …

Tomorrow Monday will often be the least number of infected people in a week, so what’s the bottom number … 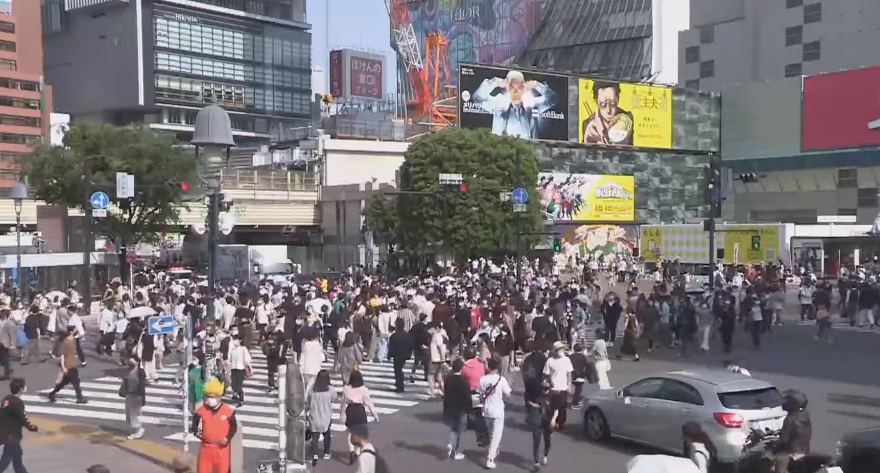 * In addition, it seems that cases of infection at the camp on May 2 (during the Golden Week holidays) are beginning to appear …

*The highest number of infected people ever (for 3 consecutive days) 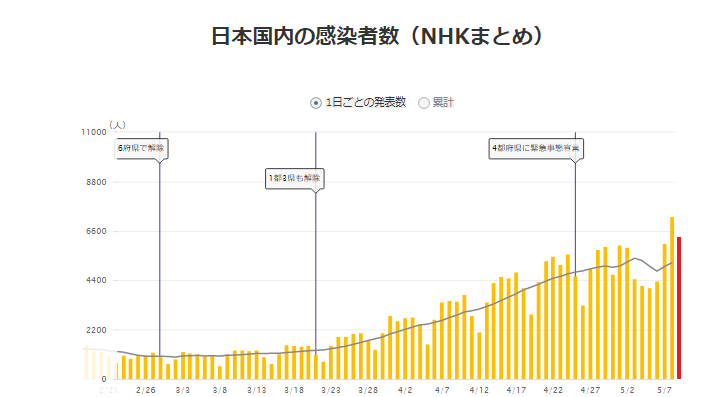 The number of infected people in various parts of Japan is too large today, but yesterday Saturday, May 8th, is still the third day after the Golden Week holidays, but the infection situation has already become serious … 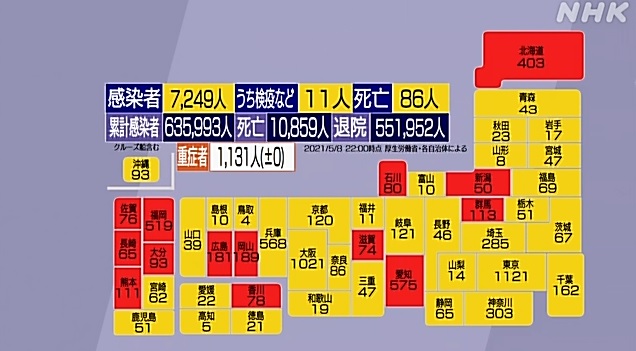 In Japan, 15 out of 47 prefectures have updated the highest number of infected people ever …

And not only that, there are so many areas where more than 50 people have been infected … ↓

↑Infection has been confirmed in all 47 prefectures nationwide, and there are so many areas where more than 50 people have been infected …!

However, only four areas, Tokyo, Osaka, Hyogo, and Kyoto, have declared a state of emergency …

Even if Aichi and Fukuoka joined from the day after tomorrow, it’s only 6 areas …

Young people think that “only elderly people get seriously ill”, but it seems that people in their thirties without underlying illness are dying in Osaka.
(*基礎疾患ない30代男性も死亡 大阪で41人死亡1021人感染 新型コロナ – Yahoo!)

By the way, it seems that the number of deaths per million people in Osaka is higher than that in India, where the number of infected people exceeds 400,000 daily …

In addition, because of such a serious situation all over Japan, there are movements to take new measures in various places in Japan…! 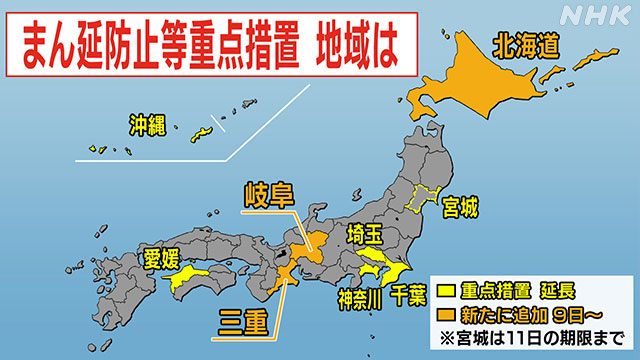 ↑ Gifu, Mie, and Hokkaido will be newly applied as targets of priority measures such as prevention of spread.(From 11th)

In addition, Kumamoto will start requesting restaurants to shorten business hours on the 10th, and will also request the government to apply priority measures such as prevention of spread.

On the contrary, what did the government think? Miyagi will be excluded from priority measures such as prevention of spread …! 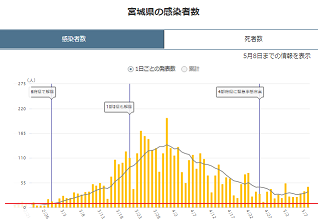 ↑ Miyagi is usually on the red line (around 10 people), but is it really okay to remove it from the measures? ??

In the midst of such movements all over the country, the government is doing the following, but all that should have already been done…

・Extension of quarantine period for immigrants from India from 3 days to 6 days
→Why was it only 3 days in the first place?
(*政府、インド入国者の水際強化へ – JIJI.COM)

・Economic expert and Prime Minister Suga meet
”If the declaration is canceled early, it will be good for the economy at that moment, but COVID-19 will spread again, so it is not good in the long run.”
→What? … You talked about it now …? That’s a matter of course, right? …?
(*「緊急事態宣言の早期解除 経済には…」菅首相と面会の専門家 – NHK)

・Policy to request large companies to disclose the implementation status of telework
”We were aiming for a 70% reduction, but companies are only complying with 20% to 30% this time.”
→What? … Did you leave the fact that it was only 20% to 30% until now …?
(*テレワーク実施状況 大企業に開示求める考え 西村経済再生相 – NHK)

Japan is in such a situation, but looking overseas …

In New York, USA, where the “disastrous situation” was often reported last year, it seems that the restrictions on restaurants and commercial facilities have been lifted and it is regaining its vitality …!

The highest number of infected people in New York was 7991, and now it is around 1000, so it seems that there are still many (although it has decreased considerably), but it’s not like Japan’s “somehow decreased”, but it’s a “real decrease” that is different from Japan’s that it was reduced by vaccines, so the situation is completely different even for the same 1000 people.

In New York, a “plan to vaccinate tourists” is under consideration to restore tourism …

It’s really wonderful that there is so much surplus vaccine in the United States
while Japan’s vaccination has not progressed at all…!

A week starting today …
What will happen to the infection situation in Japan …! (Toooo scary… :<)

At first glance, it’s good news, but when I take a closer look, I find super scary news …!

In Kitayama Village, Wakayama Prefecture, which has a population of about 430 (about 320 people are vaccinated), it seems that they have decided to give the surplus vaccine from vaccination to neighboring local governments …!

Well! What a wonderful help …!

I was reading while thinking so … However…
If you read it carefully, it says, “The distribution of vaccines from the government to local governments is in boxes, and one box is for 975 people, so even if they vaccinate twice, there will be more than 300 doses left.”

What …? Perhaps the government hasn’t even considered adjusting or using the surplus …?

Perhaps a significant number of vaccines are wasted nationwide …

I just hope that there are many talented people like Kitayama Village in Wakayama among the local governments …!