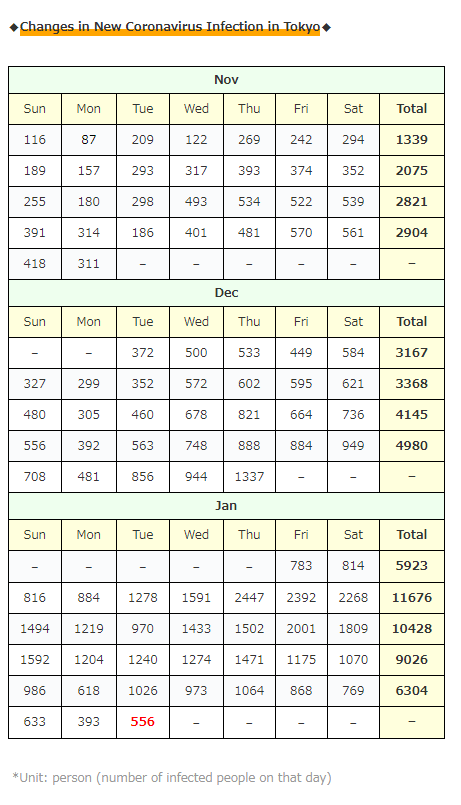 The number of newly infected people in Tokyo will continue to be less than the previous week!

However, I still have a memory of the nightmare phenomenon that “the number of newly infected people will increase dramatically on Wednesday” at the beginning of the year, and I am still confused before it is announced. .. .. lol 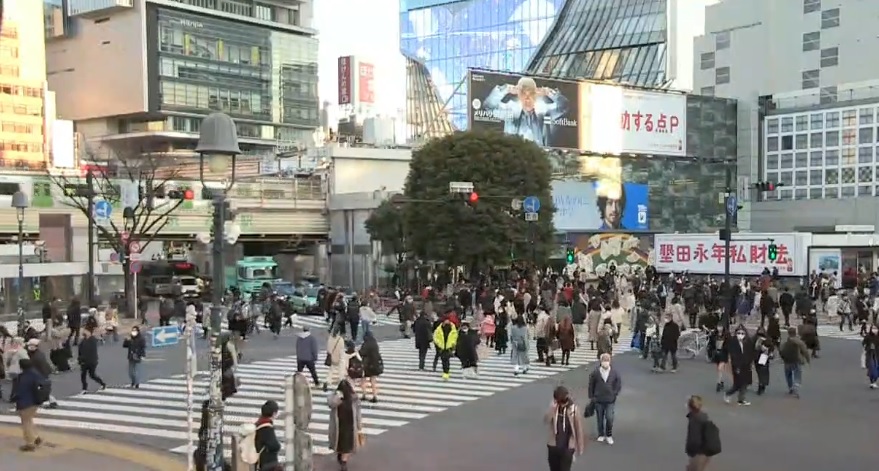 ・Infection in the facility [138] people

* Infection in the facility [138] people

・Today’s Tokyo has reached a record high for the second consecutive day, and it seems that 32 people have died …

*Most of the people who have died recently are said to have been infected during the period when the number of infected people increased explosively. 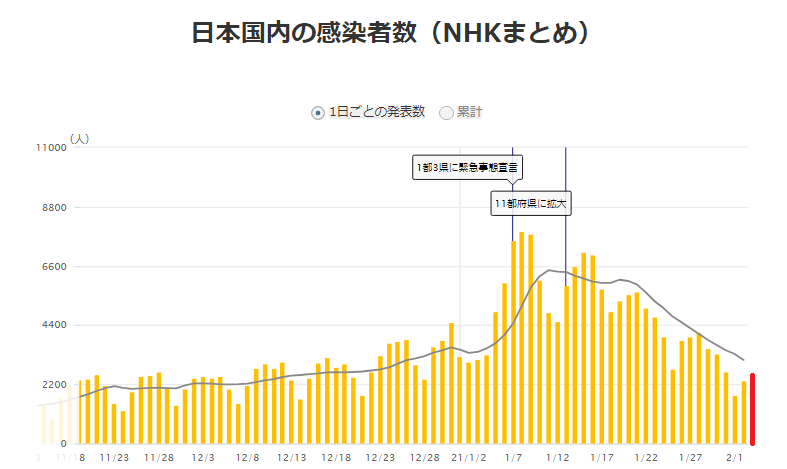 (In Japan, February 3rd is called “Setsubun Day” and it is customary to throw beans at demons to repel them. * Demon = repelling colds and illnesses)

By the way, yesterday, “extension of emergency declaration in 10 prefectures (*Tochigi OUT!)“ was decided!

Governor Yoshimura of Osaka
“Looking at the current medical pressure, there is no way to extend it.”
“But if the infection subsides, it should be canceled without waiting for the deadline.”

Governor Ohno of Saitama
“One more cooperation”
“Now I can see a little light over the tunnel.”

Governor Omura of Aichi
“I want to take thorough measures to cancel the declaration as soon as possible.”

Governor Fukuda of Tochigi
(state of emergency was lifted by the government)
“Currently in stage 3, we are not welcoming the release.”
“We need to work on it without being relaxed.”

Governor Koike of Tokyo
“The situation just returned before the year-end and New Year holidays.”
“7-day average to 70%” (*1)
“Students, young people, and students after graduation should refrain from going out.”

By the way, Governor Koike of Tokyo’s

“Then, by the end of March, the number of newly infected people per day will be 140 or less!”

The stage of infection summarized by the government subcommittee 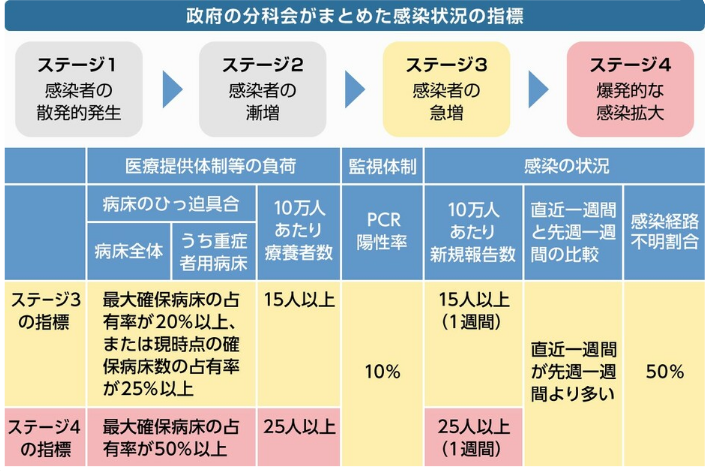 so if I convert this table to the situation in Tokyo,

(*Refer to the Tokyo website for the positive rate)

By the way, even if it is said that “7-day average = 7-day moving average”, it doesn’t come to mind for me(lol), so if I simply calculate the total for one week …

↓ Notice the red% under “Weekly total” ↓

I feel they are too optimistic, but if they don’t have a goal, they can’t “improve / countermeasure” toward it, so I hope it will come true!

And the topic goes back …

What is the “necessary measure” that the government subcommittee thinks about the extension of the state of emergency?

… While saying so, I put the source (article URL) on it … but it was the same as before! lol

(Continued to reduce the number of people who go to work by 70%, shorten the business hours of restaurants, call on young people to refrain from going out, etc.)

Well, in terms of the subcommittee, they just said … “It’s decreasing, keep doing your best as usual!!” … (dry laugh)

There are some comments that They’re worried about as below,

“The movement of people during the day has not decreased”

“We cannot expect a sharp decrease in the number of severely ill people in the future.”

For the time being, the number of newly infected people is decreasing, so I think it’s a “wait-and-see” …

Oh! By the way, regarding the extension of this state of emergency, it seems that “it is by March 7th, but the goal is to cancel it within the deadline”!

It seems that the WHO (World Health Organization) research team, who is visiting China to find the source of the new coronavirus (COVID-19), has finally visited the “Wuhan Institute of Vase” today!

I’m looking forward to the results!

By the way, the current vaccine situation is …

The vaccine developed by Oxford University in the United Kingdom and AstraZeneca, a major pharmaceutical company, is said to be 76% effective even three months after the first vaccination!

It’s frustrating that vaccination doesn’t start in Japan, but on the contrary, as time goes by, more and more information about these research results and effects will come out, so I’m grateful for that …!

(Because vaccine development and inoculation have just begun, it takes “time” to gather information)

However, it seems that there is still insufficient data on vaccines for the elderly, so it is said that “Please refrain from vaccination for the elderly aged 65 and over.”

I hope information about that will come out soon!

Prime Minister Suga
“I want to start vaccination in mid-February”

Minister of State for Special Mission Kono
“Please refrain from reporting on vaccine transportation from overseas to Japan.”

It feels like the vaccine will arrive in Japan soon! (Happy)

The situation where mutants of “British mutants” are appearing overseas …

We want to get rid of the new coronavirus (COVID-19) by starting vaccination as soon as possible, right?!