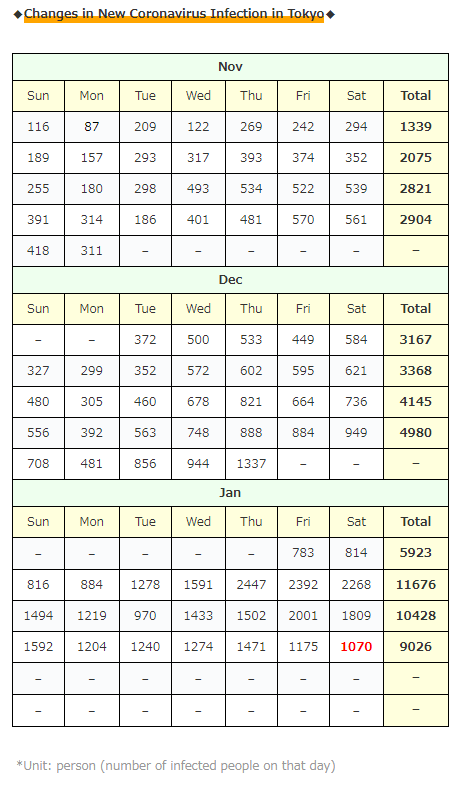 The number of newly infected people in Tokyo has dropped sharply for the second consecutive day!

And today is Saturday, so I calculated the total for the week with the usual “COVID-19 Trend Calendar in Tokyo” … 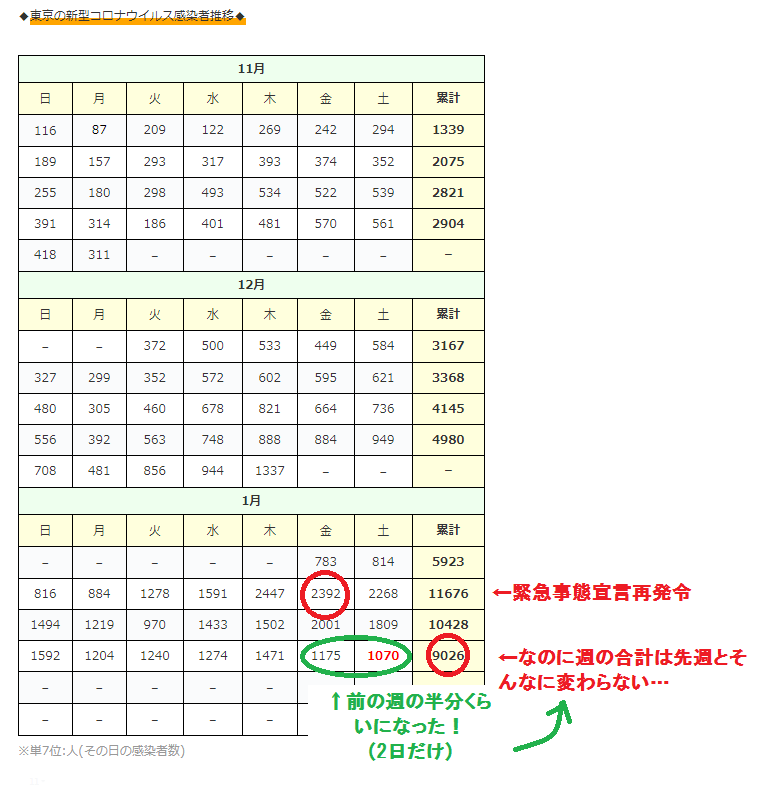 (*January 8th with a red circle on the reissue of the state of emergency)
(*A green circle showing two days yesterday and today that are half of the previous week)
(*Still, the total for one week remains close to 10,000) 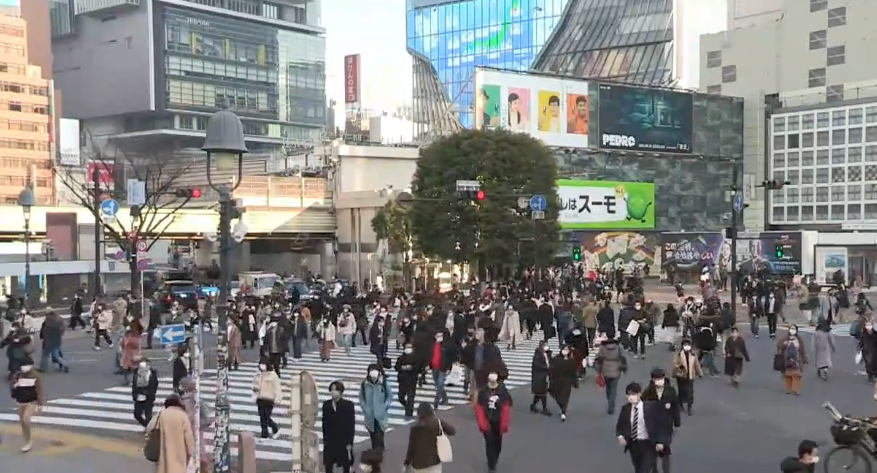 Even though it’s raining so cold, it’s Saturday, so there are quite a lot of people …

It’s been two weeks since the state of emergency was declared, but there seems to be no self-restraint mood …

・Infection in the facility [143] people

* Infection in the facility [143] people

*Three or more clusters are occurring …

* It seems that they want to divide it into  each clusters, but it seems that it is spreading throughout the hospital …

*Among the infected people counted today, there are [9] cluster relationships, including the above… (Other than the above, add 4 or less each)

* In addition, it seems that clusters have occurred in 5 locations…

*Among the infected people counted today, there are [9] cluster relationships, including the above.. (Other than the above, add 4 or less each)

*Among the infected people counted today, there are [6] cluster relationships, including the above.. (Other than the above, add 3 or less each) 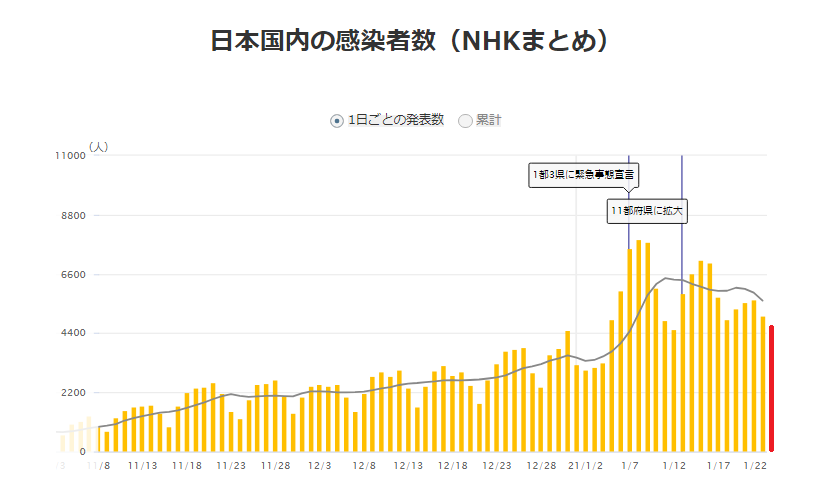 “How much will the government specifically improve the infection situation before it lifts the state of emergency?”

That’s the part we are very worried about!

There was an answer article about it!

Dr. Omi of the government’s new coronavirus infection control subcommittee and Mr. Nishimura, the minister in charge of economic revitalization, appeared on “Nico Nico Live Broadcasting” and talked about it …

Since the government decides, we do not make a final conclusion in the government subcommittee, but my personal opinion is clear and there are three conditions.”

“The first is that the infection status will be stage 3”

“The second is that the infection situation and the medical pressure situation continue to improve, rather than being released as soon as stage 3 is reached.“

“Third is that it can be expected to be lowered to stage 2 even after the release.”

It’s a content that seems to be convincing for a moment, but it seems to be a very disappointing idea that “They’re going to release it in stage 3 after all” …

They say that COVID-19 can be ended if people can “mask”, “avoid going out”, and “eat with a small number of people”, but it is time to look at the number of people in the city and “it is impossible to expect individual efforts. I want them to notice that …

By the way, the number of people in each area is like this …

(* Please ignore the red part “Comparison with last year’s state of emergency” as it is not helpful.) 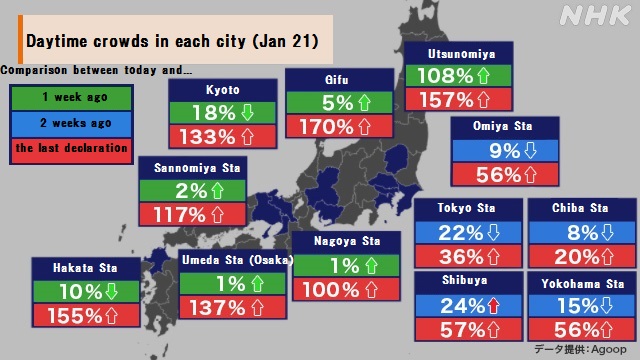 Please pay attention only to the green and blue parts.

It seems that there are not many companies that follow the telework recommendations this time, and the number of people in business districts such as Tokyo Station has not decreased as much as I expected.

And the biggest problem is …

Prime Minister Suga said at the government’s countermeasures headquarters for the new coronavirus (COVID-19), “We will promptly deliver safe and effective vaccines to the people, resolve the infection as soon as possible, and regain the daily life of living with peace of mind.”

This means … “He depends only on the vaccine for the solution” …?

“Even without a vaccine, the people’s power and government measures will solve COVID-19!”

“Vaccines are used only for the final touch!”

Apparently, in a situation where the Prime Minister and the government itself “depend on the solution only for vaccines”, the current state of emergency seems to be “time-earning” until then …!

Well, Japan has a lot of fundamental problems like that mind …!

For some reason, the number of articles about the “Olympic Games” has increased considerably in the last few days!

The other day, there was news that the Japanese government decided to cancel the Olympics informally, but it seems that it was fake news …!

Chairman Yamashita of the JOC (= Japanese Olympic Committee) denied that …

In addition, it was also revealed that “in February, we will provide specific guidelines for infection control.”

There are still many uncertainties about the Olympics …

I would like them to hold it when I think of “the athletes who have been aiming for the Olympics”, and of course I really want to see it …

but what Japan expected from the Olympics was more “economic effect” …

If there are no spectators or the world’s COVID-19 infection does not converge, the number of tourists will not increase …

It is a difficult problem…

But in any case, the infection must be resolved first!

The situation where no one can put up with it and the infection is widespread is not like Japan! lol