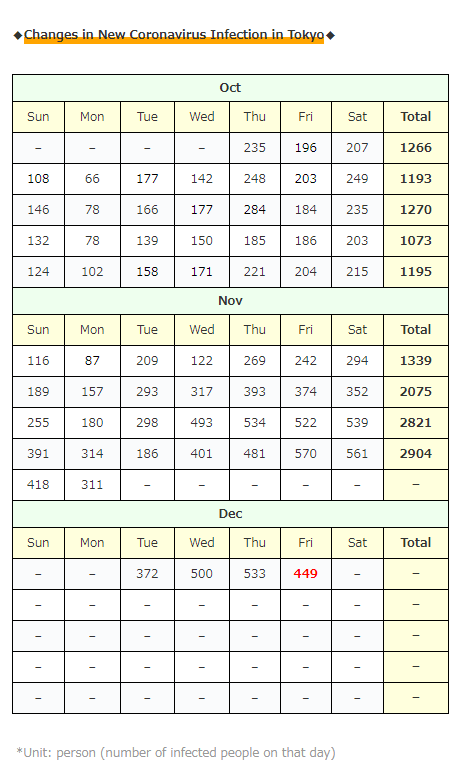 The number of newly infected people in Tokyo was 533 yesterday, so I was afraid that “how much will it increase today …”, but I was surprised that it was less than I thought it was 449! 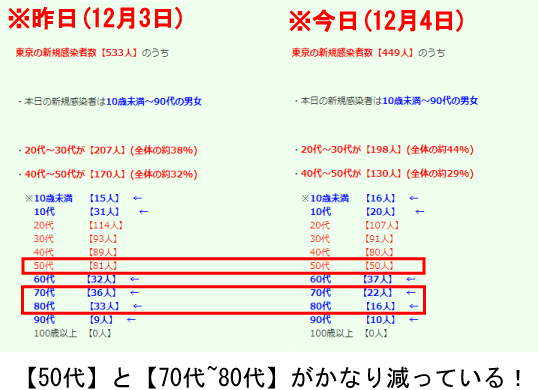 Compared to yesterday, people in their 20s to 40s are almost the same, but

As mentioned above, it has decreased considerably, so it seems that the outbreak has subsided.

Even though Tokyo doesn’t give much information on outbreaks. .. ..

・Infection at a dinner with friends and acquaintances [21] people

* Today, there were some individual infection cases such as outpatient care facilities in Katsushika Ward, elderly facilities in Minato Ward, and ward council in Ota Ward, but we could not confirm information on outbreaks. In-facility infection [54 people] and workplace infection [32 people], so I don’t think there can be no outbreak. .. ..

*Cumulative 6 people (9 people on board)

*There were a few other additions to the existing clusters. 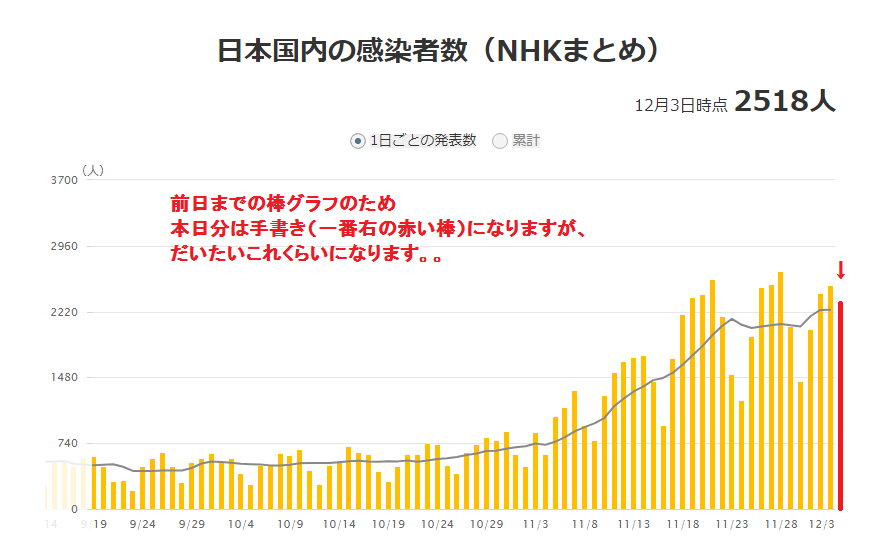 It seems that it has been decided in Osaka to call for refraining from going out unnecessarily.

It seems that the situation is almost the state of emergency with the index unique to Osaka (“Osaka model”).

The other day, Osaka requested that the business hours of alcoholic beverage restaurants be shortened to 9:00 pm from November 27th to December 11th (15th this time), but there was also a request to refrain from going out unnecessarily.

It seems to be held from December 4th to December 15th.

I’m worried about the effect!

And next is the topic of Tokyo,

A monitoring meeting for measures against the new coronavirus (COVID-19) in Tokyo was held yesterday!

Well, the numerical data is just as everyone thinks, so I will omit it, but there were some remarks that I was a little worried about, so I will summarize it!

①The infection status has reached the highest alert level of “infection spread”, which is the same as last week.

②The situation is such that a normal bed is used for COVID-19 patients.

(The number of hospitalized people this week exceeds 1600)

“In the future, we will have to limit scheduled surgery, etc.”

“Don’t let the dead first. Second, do not give out the most seriously ill. Third, prevent the collapse of the medical care provision system. In order to protect the citizens of Tokyo with these three pillars, we would like to focus on infection control in a short period of time. ” ..

There is no “controlling the number of newly infected people” …?

I think the root of these three pillars is the number of newly infected people, but even if this increases, she don’t seem to care at all …

The citizens of Tokyo may be in a terrible situation…

By the way, as I learned from the article of this conference,

about the recently talked about “positive report in private PCR test” and reported positive to the health center in Tokyo”,

It seems that there were 98 people in a week who sent samples to medical institutions in Tokyo from other prefecture and reported positives to the health center in Tokyo!

98 people (about 10 to 15 people a day?) has no effect on the number of newly infected people in Tokyo, where the infection is extremely widespread (it makes me sad to say!), but I think it’s okay to transfer the information to the local health center…, isn’t it?

There was information about what I was worried about all the time. .. ..

A subcommittee on measures against the new coronavirus (COVID-19) of the Ministry of Health, Labor and Welfare recommends to prefectures that “it is difficult to balance normal medical care and COVID-19 medical care, so limit the number of hospitalizations for COVID-19 patients.”

Specifically, the risk of aggravation such as age and the presence or absence of chronic illness is scored, and those who are below a certain score will be treated at home or accommodation.

There was such a story before, and I was worried, but it seems that this will finally be introduced. ..

This is … a medical collapse …?

Because there are many people who would normally be hospitalized but cannot get medical care at the hospital …?

However, according to the Ministry of Health, Labor and Welfare, “This will reduce the number of new inpatients to less than half!”

there is a risk of “that” if a person who should have been hospitalized cannot be hospitalized and is treated at home, and even though the government is telling us to be careful about family infections in the first place, I am a little worried.

But …! Either way, it’s best not to get infected!

Best of all, as many people as possible will be careful and not infected!

Strange to say, “I’m a little relieved today without updating the highest number of infected people in the past,” but even so, nearly 500 people are increasing…

The EU (= European Union) is also reviewing Pfizer’s vaccine license, and it seems that a conclusion will be reached at the end of December this month at the latest!

In response to that, it seems that European countries such as France, Italy and Spain have announced vaccination plans!

And Russia also announced that it will start vaccination in the first half of next week!

Of course, the Russian domestic vaccine “Sputnik V” is used!

Russia … It was approved for emergency use in August …

What have you been doing so far …

Russia has a large-scale outbreak in parliament the other day even though there should have vaccine, is that vaccine safe …? I’m a little worried about this.

And in the UK, which is the first in the world to start vaccination next week, “What an envy!”

“The UK neglected the examination and approved only the data from Pfizer!”

…and soon after that …

“There was a misunderstanding. I want to apologize for that.”

He apologized at a tremendous speed … lol

I wonder if “the United States was about to start vaccination”, but “the UK took the world’s first,” so he was angry …?

By the way, the UK emphasized that “no procedure was omitted”, and it seems that the approval examination actually took a method called “sequential examination” and analyzed the information that came out during the clinical trial each time.

(Usually, it seems that the data of clinical trials are collected before analysis)

They don’t care about such jealousy at all and move on to the next stage!

“Vaccines must be kept above minus 70 degrees Celsius!”

As you may know, the Japanese media reports such a very disturbing report every day, but the UK is thinking about transporting vaccines,

about that, Pfizer came up with a very handsome answer,

“We have developed a container that can be transported at 70 degrees for 10 days unless it is opened with dry ice”!

We’re in love with Pfizer!

Vaccines are advancing steadily, and difficulties (such as transportation) have been overcome!

Under such circumstances, when I return my eyes to Japan …………