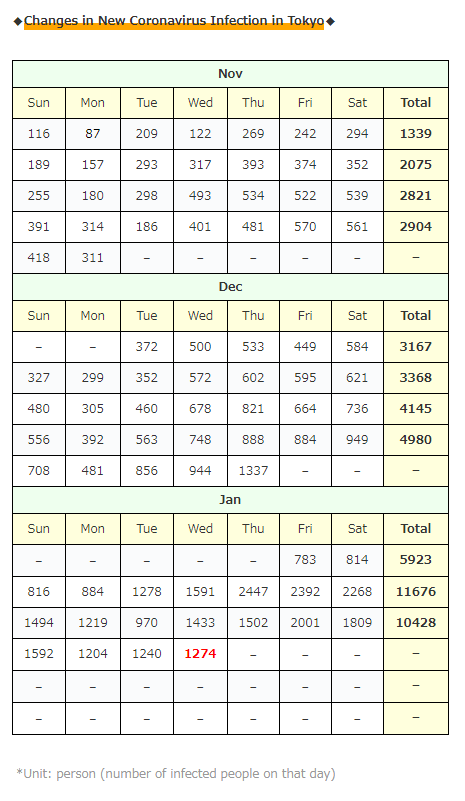 * Today, Saitama has exceeded the cumulative number of infected people in Aichi …

There was a common understanding that the number of newly infected people in Tokyo would increase sharply on Wednesday after the third wave, but today it is almost the same as yesterday.

I hope the “spread” of the infection has stopped… 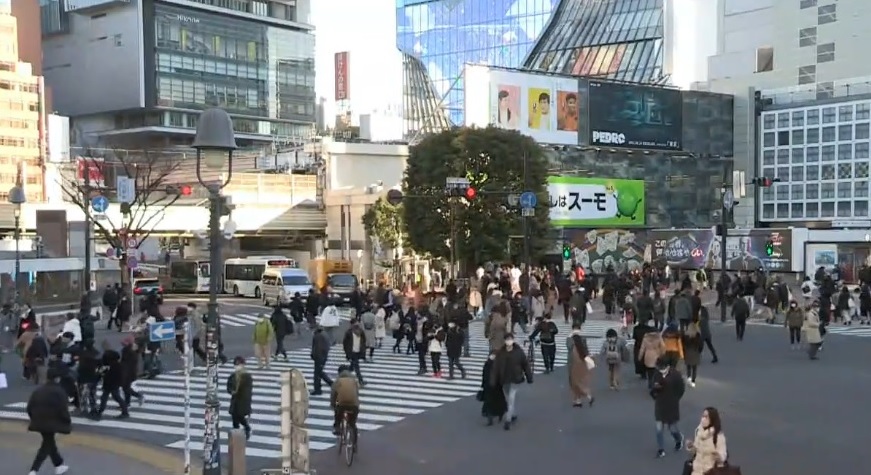 The amount of people in the city was still the same …!

・Infection in the facility [133] people

* Infection in the facility [133] people

* It seems that both of them died during hospitalization adjustment …

* People who died during home medical treatment: 6 people in total 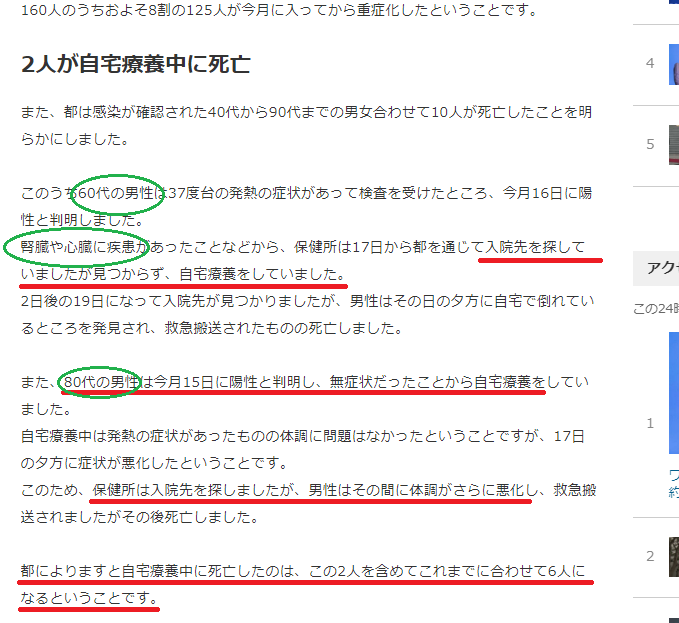 * it may be counted tomorrow.

・Medical institution in the prefecture

*Among the infected people counted today, there are [16] cluster relationships, including the above… (Other than the above, add 4 or less each)

・Facilities for the disabled in Abiko City

・Restaurants with entertainment at night in Okazaki City

* There was no outbreak information in Fukuoka city as usual, but there was information that clusters were confirmed in the following three places.

・“Home party” at a private home in the Ishikari region

*Among the infected people counted today, there are [11] cluster relationships, including the above.. (Other than the above, add 3 or less each)

・Special nursing home for the elderly in Kobe City 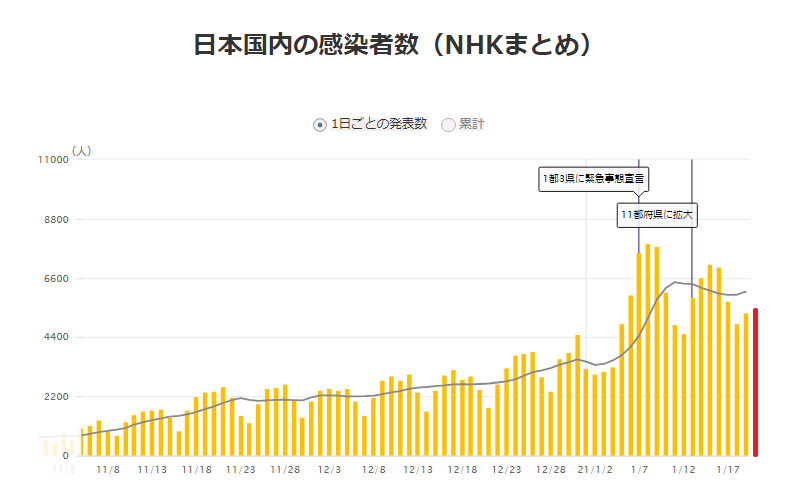 Yesterday, in addition to those who were found to be positive in “Airport Quarantine”, a large number of positives were found in “Quarantine at Seaport” …!

(From the summary article on January 19th)

“What? It’s often the case that it hasn’t been announced so far …?”

I thought that way and looked it up …

“The infection of the new coronavirus (COVID-19) was confirmed at the quarantine station in the domestic port since the outbreak was found on the cruise ship” Diamond Princess “in February last year.”

We’ll be surprised, even if we suddenly see something like this …lol

Anyway, even if Japan has “immigration restrictions for the whole world”, it is a difficult problem that there is such a risk with ships carrying luggage or something …

It is necessary to move luggage and goods …

And the “Revision of the Act on Special Measures Against the New Coronavirus” that should start this week (penalties for stores that do not comply with the closure request, etc.), but after all the opposition parties seem to have been cautious.

The Constitutional Democratic Party and others seem to have given the following opinions.

“If the government does not provide more support to businesses, even if only penalties are set, it will not be effective.”

“The criminal punishment of” imprisonment for up to 1 year or a fine of up to 1 million yen “for not responding to hospitalization recommendations is too heavy.”

“The important thing in the Special Measures Law is financial support for businesses, and it is not good to focus on the discussion of penalties.”

“However, we just understand that measures are needed to prevent infection.”

It is a major premise that there is sufficient support for businesses requesting leave, but with so many people not refraining going outside etc under the state of emergency, it seems that there is no way to stop the spread of the infection anymore without penalties …

In addition, regarding “the criminal punishment of” imprisonment for up to 1 year or a fine of up to 1 million yen “for not responding to home medical treatment / hospitalization recommendations is too heavy”,

Still, do the people have to put up with it?

“Criminal punishment is too heavy” sounds like a good-sounding word that seems to cherish human rights, but it feels like an “irresponsible word” that does not protect the “most people” at risk of infection.

As many of you may already know, in Kanagawa Prefecture, where the spread of infection has not stopped, a surprising policy was revealed at the Infectious Disease Control Council, which gathered medical personnel …!

①Correspondence to home recuperator is changed to the following

Until now → The prefecture was checking the health condition

From now on → seek self-management

②In principle, the “pulse oximeter”, a device that measures blood oxygen saturation, is not rented to anyone under the age of 40.

(There are 19,300 pieces, but they cannot be lent to everyone due to unreturned cases or shortages)

③Until now, health confirmation was done twice daily by automatic answering phone or LINE, but now it will be done once.

④There were 15 items to check so far, but from now on, there are only 2 items, “suffocation” and “fever”.

⑤If you feel sick, you will have to consult the telephone counter yourself.

It seems that it will be changed within the month …

In addition, people with low blood oxygen saturation and people waiting for hospitalization are said to be “high-risk people”, and the prefecture will adjust their hospitalization if they deem it necessary by listening to the situation over the phone.

“Since November last year, the number of home care recipients has increased 15 times, and the workload of prefecture staff has exceeded the limit.”

“We can only deal with high-risk people”

“A state where people in their 80s are staying (at home)”

“We can only deal with high-risk people. We are in that situation.”

Some medical staff said that they should be hospitalized before their condition worsens, but the prefecture asked for their understanding that they really have no beds …

By the way, as of the 18th, the situation in Kanagawa is that the utilization rate of beds that can be used immediately is follows.

And about “the possibility of medical collapse”, Mr. Anan seems to have answered as follows …

“Because the hospital doesn’t receive the patient, the emergency staff will have to refuse to the patient.”

This is a situation where we can only say that

“Medical care is collapsing to prevent it from collapsing” …

Because they says, “It can’t be helped if more people die at home one after another” …

Of course, the person in charge of the prefecture doesn’t want to say that, but I think it’s a situation that he have to say …

It is no longer the situation that many people ignore an emergency and leave it alone, or (as mentioned above) say that “the penalties are too strict.”

This time I talked about Kanagawa, but I think that the situation is similar everywhere in the country…

Right now, it doesn’t matter if it’s a “penalty” or any other measure, so it seems that we have to reduce the number of infected people right away …!

It’s not Kanagawa, but today in Chiba, a person under the age of 60 who is undergoing home medical treatment died …

(* It seems that the health center adjusted the hospitalization due to fever of 38 degrees, underlying illness in the circulatory system, and worsening of symptoms on the 16th, but it seems that it was judged to be low priority in terms of age and symptoms.)

The last train time will be advanced in Kanto from today!

It’s also summarized here(*Quick summary of the reissue of the state of emergency), but it’s about 10 to 30 minutes, so it doesn’t seem to have much effect in a good or bad way … but if you miss it, you won’t be able to go home! (lol), so please be careful!