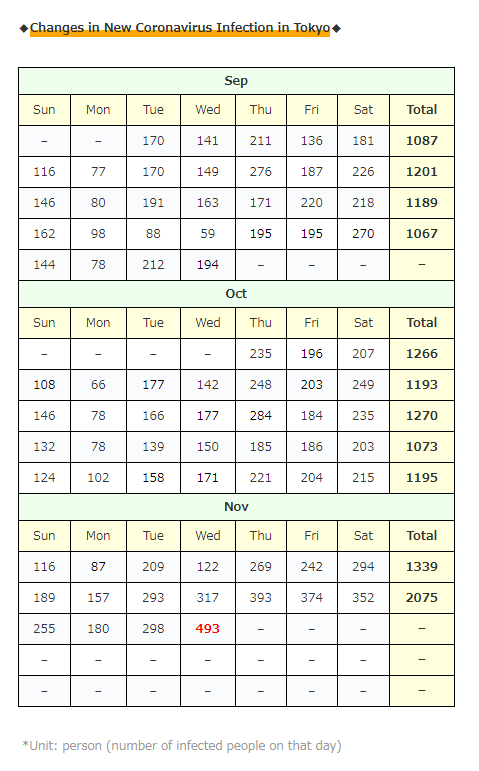 The number of newly infected people in Tokyo has already reached about 500 even though it was Wednesday.

** It is possible that it has spread through communal living such as in dormitories.

*In addition, there seems to be an example of infection by driving with a friend.

(About changing the counting method in Osaka City)

was the aggregation period, but after November 16th

It is said that it will be the amount that was found.

→ As a result, the numbers announced in Osaka will be almost the same as the previous day.

*In Osaka, details rarely came out on the day, so it would be nice if you could understand this on the day.

* Summary of outbreaks related to the “entertainment district at night in Susukino, Sapporo City [1 stores, 2 people]

・ Outbreak of “Dream House”, a special nursing home for the elderly in Sapporo City [3] person(s) 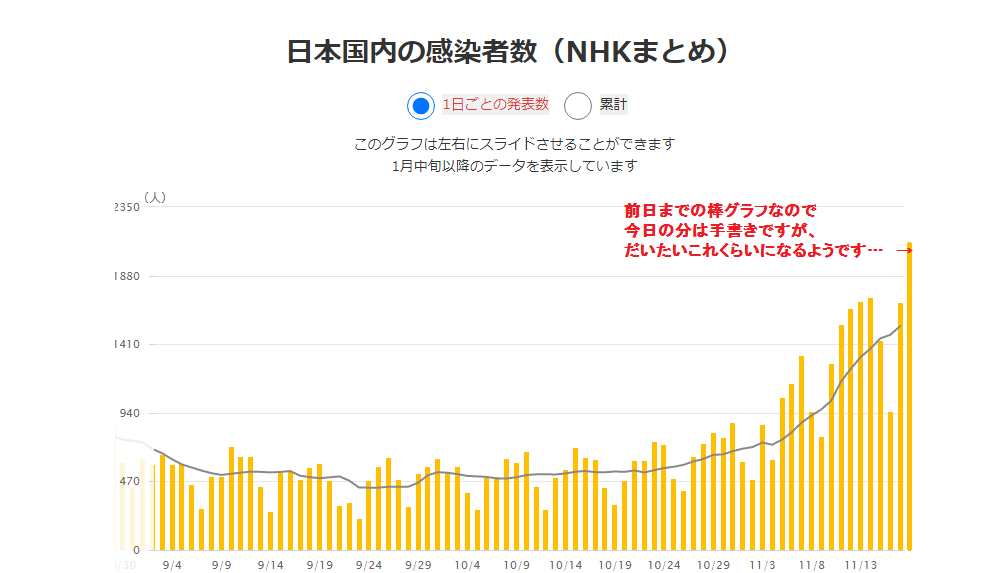 Since the government and local governments did not take any measures, it was obvious from everyone’s eyes that it would be exceeded, but if it was actually exceeded … it would be too disappointing…

Today is a day that has just exceeded the record high, so I don’t think there will be much information coming out, so take a second look …

I will put together the usual articles!

Speaking of which, the other day, I introduced such news in the summary article on November 16th the day before yesterday,

(From the summary article on November 16th)

And overseas, it seems that the situation is still tough, with British Prime Minister Johnson entering quarantine as a “rich contact” for the new coronavirus (COVID-19). 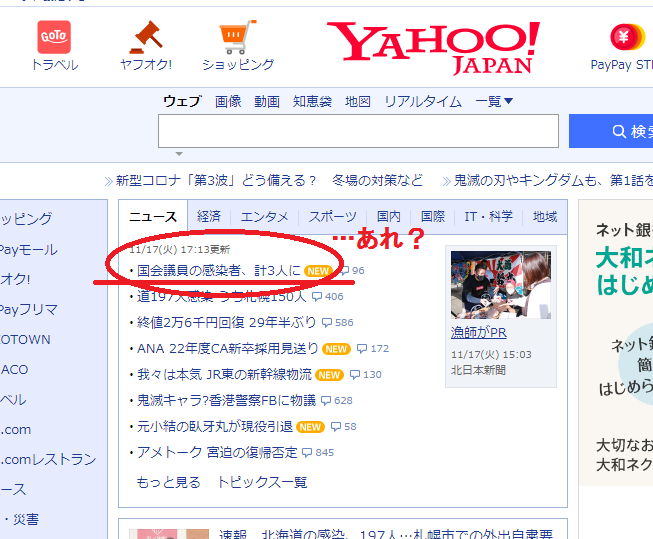 They are already infected…

When Junya Ogawa, a member of the House of Representatives of the Constitutional Democratic Party (Proportional Shikoku), had a fever and was tested, he was infected with the new coronavirus (COVID-19) …

It seems that he was going to the Diet on the 12th, and he was meeting with various ministers on the 16th, so I hope the infection has not spread.

And since the spread of infection has already begun, it seems that the situation in Japan will not stop anymore, but there was such news as the countermeasure that became the news yesterday and today!

Let me introduce you to some of them!

The Japan Tourism Agency says that regarding group trips using the “Go To (Travel) Campaign”, thorough infection prevention measures such as prohibiting eating and drinking on the bus and dividing meals into 4 or less people are required.

…… they should say earlier!

It seems that there is no limit on the number of “Go To Eat” in Kanagawa, which is likely to be in the TOP3 rather than the TOP10 in terms of the number of daily infected people in Japan.

“There is no problem if you mask it except when you actually eat and drink!” …

I think that the infection situation in Kanagawa will affect neighboring prefectures (especially Tokyo, etc.), so I can’t understand this statement, but I think it’s a “wait-and-see”. ..

Infection prevention measures are likely to become stricter as the infection spreads, but

if each local government requests shortening of business hours, etc., the maximum  subsidy is 20,000 yen per store per day and the upper limit is 600,000 yen, and

it seems that the country has decided to bear 80% of that!

“should be sad that the upper limit has been set” …

I introduced about 3 quickly, but this is the main one …

I was surprised to see the top news of Yahoo! in the morning. 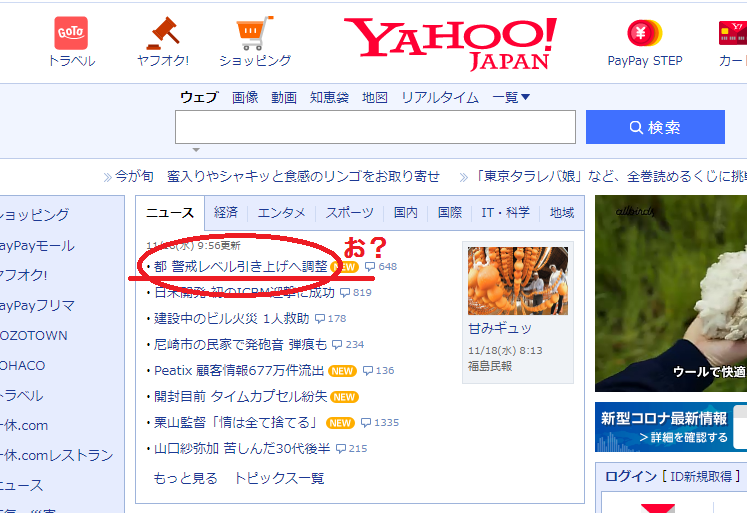 I woke up in an instant! lol

Regarding the new coronavirus infection (COVID-19), the Tokyo Metropolitan Government is making final adjustments to raise the alert level of the infection situation in Tokyo to the most serious “infection is spreading” among the four levels of indicators.

It seems that the Tokyo Metropolitan Government is considering shortening business hours for businesses in Tokyo.

In the first place …

It’s an ambiguous “stage such as infection status” from the perspective of me, too, who always introduces this “summary article” together … 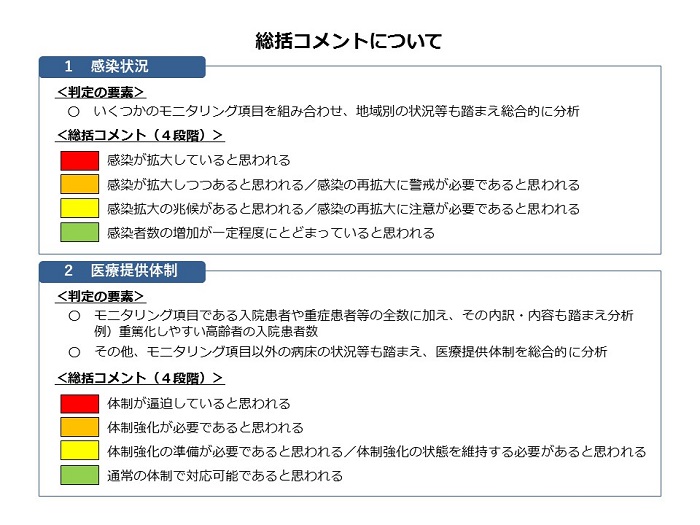 (*The explanation of the alert level of Tokyo is without numerical values ​​and without countermeasures, and only the trends are written.)

↑ There is such a thing, but we’re not sure, right?

Perhaps both the government and the Tokyo Metropolitan Government would like to take the initiative in infectious disease control by leaving “a place that is ambiguous on purpose”,

but from our point of view, like to saying “We will lock down when it reaches stage 4!”, it’s easier to understand if they specify the measures to be taken for each stage properly,

and even those who are not concerned about infectious disease measures say,

“What?! If there are 100 more people, the store will close again with a state of emergency.”

I think they will be careful about prevention…

I want ourselves to manage to overcome until vaccination begins!

at last, the number of people increased by more than 1000 a day, which was a terrifying thing …

This year there is no Santa Claus! :<

Finnair seems to have invited the local official Santa Claus to Japan every year since 30 years ago (!), But this year it seems that it will be postponed due to the new coronavirus (COVID-19).

“I’m thinking of another way to deliver the present!”