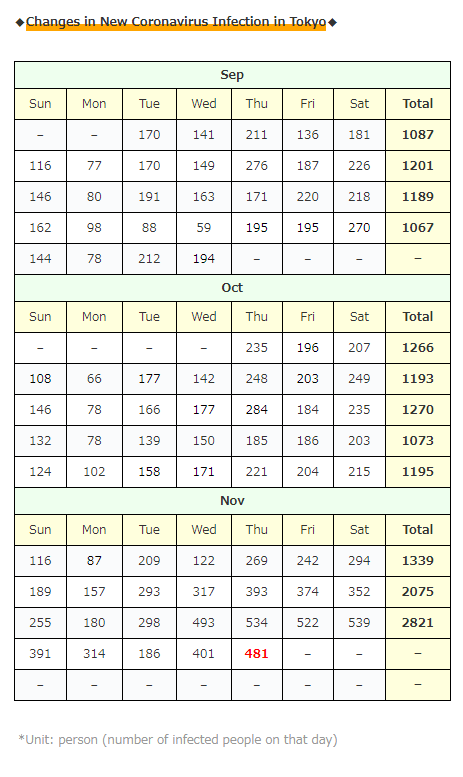 The number of newly infected people in Tokyo is still likely to be affected by the three consecutive holidays, so I can’t say anything …

(1) The number of tests was small because medical institutions are closed during consecutive holidays.

(2) However, a person who felt sick during the holidays might be tested at once after the holidays.

(3) The effects of people infected during consecutive holidays will appear in numbers after a week or two.

And also today, if you take a quick look at the numbers above …

There were always a few people, but in the last two days there are more than 30 people …

In the third wave, even Fukuoka, which had kept the number of infected people down for a long time, has finally started to increase …

I told you, but today,

This is already … even Fukuoka …

・Infection in the facility [30] people

・Outbreak of “Seitokuen”, a special nursing home for the elderly in Meguro-ku [15] people

・Summary of outbreaks related to the entertainment district at night in Susukino, Sapporo City [N/A] person(s)

*It is possible that the infection spread in the chorus contest.

・Outbreak at a dinner in Tsuchiura City [1] person(s) 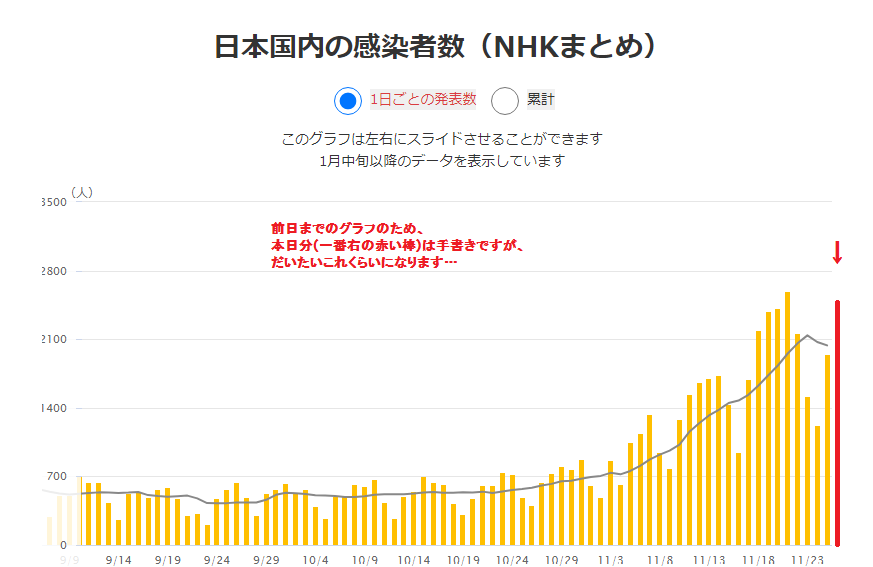 From such shocking news today …

Currently, the third wave has arrived in Japan and the difficult situation continues every day, but it seems to be a super-super-excellent country from a global perspective …

Bloomberg News ranked the number of infected people and the positive rate per 100,000 population … ↓ 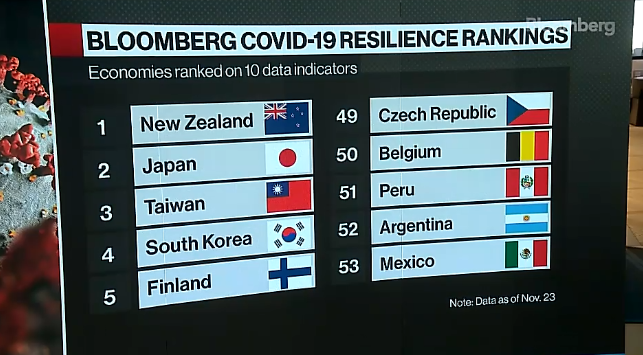 No way Japan was in second place …!

But overseas, especially in Europe and the United States, there are tens of thousands of newly infected people a day, so I wonder if that is the case …

After all, I’m not convinced!! lol

I’m scared of the number of infected people announced every day!!

I will summarize it roughly!

(From an extraordinary press conference on November 25)

Call to refrain from using issued points and meal tickets

* Planned to request the government

○Remarks ： It is said that travel that has already been reserved will be assisted.

・About “Go To (Travel) Campaign”

○Contents ： Tokyo will not be suspended for the time being.

“In order to stop the spread of infection, not only the destination but also both” arrival and departure “should be stopped. The Government of Japan should make decisions from a nationwide perspective. “

She said above and made it clear that she wouldn’t stop until the country decided.

・Others (from the statement at the press conference of Governor Koike)

○”Avoid dinner with family members living with the elderly”

○”I would like to request the spread and establishment of telework”

○”We will further strengthen measures for people in need”

It’s better to do it than not to do it, but when the government did it in August, it just coincided with the time when the infection decreased, and it seems that it is not really effective …?

By the way, Saitama, Kanagawa, and Chiba, which are in the vicinity of Tokyo, do not seem to request shortening of business hours, but first they want to see the effect of suspending the Go To eat meal ticket.

The ruling Liberal Democratic Party seems to propose an extension of the “Go To (Travel) Campaign” until the spring holidays at this time.

However, this is a proposal for Prime Minister Suga’s request to come up with a plan for additional economic measures.

On the contrary, are there any other wage cuts …

After all the employment adjustment subsidy is strong …

(* The employment adjustment subsidy was due for special measures until the end of December, but it has been decided to extend it until February.→NHK)

And about yesterday’s government subcommittee on measures against the new coronavirus (COVID-19), it was pointed out that “there are areas where measures are not taken even though the infection situation is equivalent to” Stage 3 “, which requires strong measures.”

The subcommittee mainly recommends such things for the stage 3 area.

・Avoid going to and from this area as much as possible

“A very strong sense of crisis was shared in the subcommittee.”

“The last three weeks are the most important”

The recent government thinking about the “Go To Travel Campaign” is as follows.

“There is no evidence that ” Go To Travel “ is the cause of the spread.”

“Regionals are able to maintain employment thanks to ” Go To Travel ““

“Subcommittee experts say people won’t get infected on the move.”

“I don’t know the cause”

Infected because no infection prevention measures have been taken → Understand

It will expand because people move even though infection prevention measures have not been taken → Super understandable!

If the cause of the spread of infection is “People can’t take preventive measures properly”…,

it’s impossible because people have been doing it for half a year and can’t take preventive measures!

So there is no choice but to limit the movement itself!

For the time being,

They should have taken action before stepping on the accelerator…

about 1000 people are increasing today …

Not only bad news but also good news!

In the United States

If people are vaccinated 40 million times (one-third of the population) in Japan, the new coronavirus is likely to end!

(* It seems that you actually need about 70 million times)

If this really works dramatically, the world will change dramatically next month or month after next!

Although it was just news that was negative recently, a little hope came out!