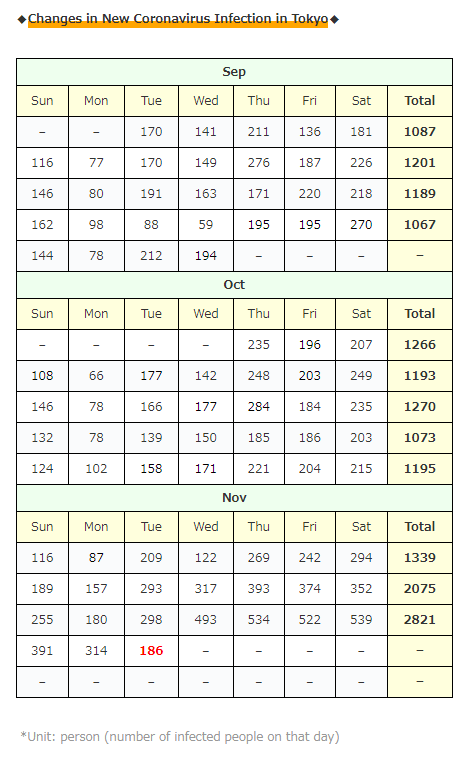 The number of newly infected people in Tokyo tends to decrease irregularly the day after the consecutive holidays, but “even if it decreases abnormally” 186 people … Is it more or less …

The same can be said for the number of infected people nationwide, but the today’s numbers are as follows.

It’s scary that the number of Thursday-Saturday and next week, which is the latter half of this week, will be huge …

* Governor Koike, who should take measures against infectious diseases in Tokyo, said as follows.

“(About the fact that the number of seriously ill patients increased to 51 and 10 people), because of the three consecutive holidays, the number of reports to the city came in at once today, so it became 10 people.”

“There are many infections in the elderly, and I think it is a warning to be careful again about how to prevent the transmission to the elderly.”

・Nosocomial infections at medical institutions in the prefecture [3] person(s)

*It seems that it was discovered that a man in his 40s, who was admitted to a hotel in a new coronavirus accommodation facility in Yokohama, went out to two convenience stores without permission without wearing a mask. Please be careful of those around you …

* Today’s number of newly infected people in Tokyo is 391, so Osaka is a number that greatly exceeds that … 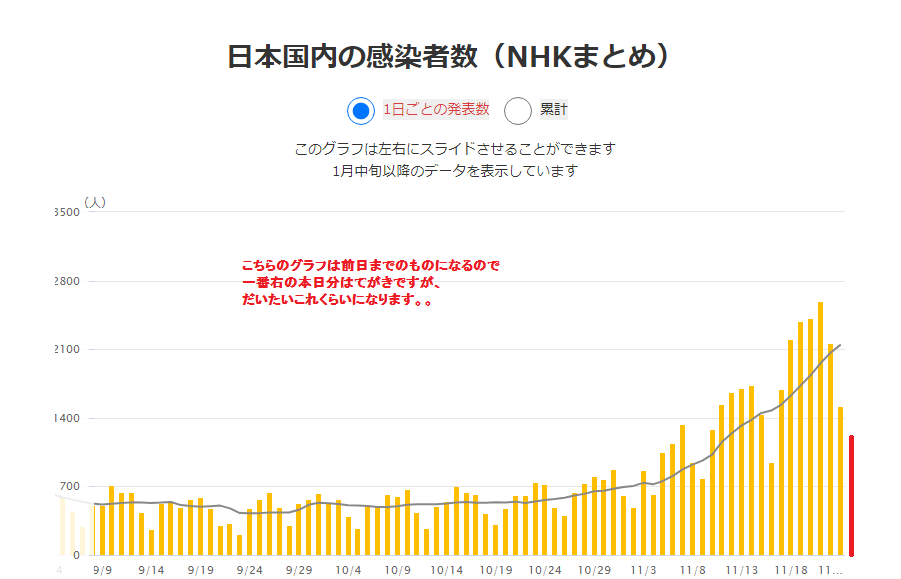 3 consecutive holidays are over!

It’s scary just to think about how much this effect is. ..

By the way, from such a topic today …

I wanted to introduce the “flow of people” on the last day of 3 consecutive holidays, but …

All the news that came out was “At about 80% of the points, it decreased from the 21st of the first day of consecutive holidays !!!” …

Everywhere in the press, it says, “Since there was a report of GoTo review on the afternoon of the 21st, the movement to refrain from going out accelerated during the consecutive holidays.”, but…

Thinking normally, the last day of consecutive holidays is “the day to return from the trip” and “the day to relax at home”, so the number of people going out will decrease …

By the way, the data is…

It was like this on the first day of consecutive holidays

（From the summary article on November 23）

Comparison with holidays from January to February before “new coronavirus (COVID-19) infectious disease” .

Although detailed data on each point was not available, the number of people in the downtown area on November 23, the last day of the consecutive holidays, is as follows.

And it seems that it has decreased from [Nov 21] at 47 points out of 95 points such as Sapporo station, Nagoya station and Tokyo Ginza.

Moreover, it hasn’t decreased at about half the points …

It may only be felt by me, but I feel that the number of people has not decreased more than I expected …

And it seems that the calls that politicians said,

“Avoid going out during the three consecutive holidays,”

By the way, I will tell you about the review of “Go To (Travel) Campaign” tomorrow after the details are announced today and the information is available!

“I want to suspend the campaign in Osaka city”

“I have to consider suspending in Sapporo city”

In areas where the infection is widespread, it seems that Governor is finally requesting to suspend the “Go To  (Travel) Campaign.”

I’m pretty worried that it’s limited to some areas, like “in the city” …

“We want the government to decide the specific parts of the system as soon as possible.”

“We want the government to limit the areas where it suspends.”

Governor Oigawa of Ibaraki Prefecture, where the spread of infection does not stop in the downtown area at night

“It is appropriate to think about (stopping) not by prefecture but by detailed area.”

Everyone wants to avoid the economic impact as much as possible, but I think that pinpointing out the area will only spread the infection to the immediate area …

Well, if the government is full and guarantees money, the economy will not die, infection will be suppressed and there will be no problem,

but the fact that it does not fully subsidize causes problems …

As you can see, politicians always deny it, but they think that if the “Go To (Travel) campaign” is suspended, the infection will subside.

In addition, the “Go To (Travel) Campaign” seems to be one of the factors that spread the infection from everyone’s perspective … 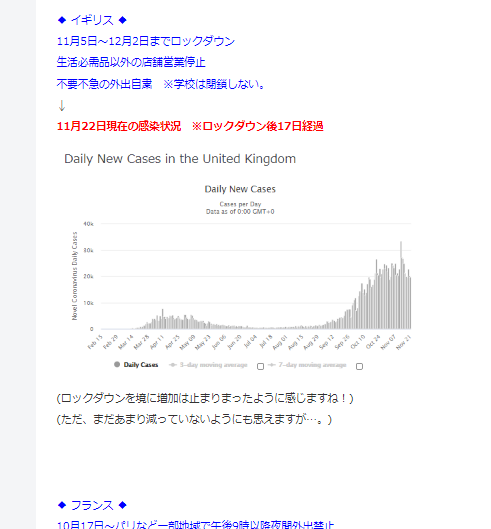 (From the summary article on November 23)

In the United Kingdom, where the number of infected people has not decreased so much, the lockdown (city blockade) currently being carried out after December 2nd will end once, and then it seems that PM will show the policy that it will be restricted by region until April next year.

And in France, which has succeeded in significantly reducing the number of infected people, it seems that it will soon announce a gradual mitigation of lockdown (city blockade)!

By the way, in Italy

It seems that the infection has not stopped (increased) at all. .. ..

Well, here is the last!

WHO (= World Health Organization) said, “We are confident that we can conduct an on-site investigation at an early stage” in order to investigate the source of the new coronavirus (COVID-19)!

It’s been over half a year now and can you find it?

And can it be found by WHO (rumors of good friends with China)?

As mentioned above, I’m skeptical, but I don’t want this situation to happen again, so I want them to thoroughly investigate the cause …!

Although the number of infected people was small today after consecutive holidays, but the number has increased by more than 100. .. ..

Today there were two headlines on the economic side of Yahoo !… 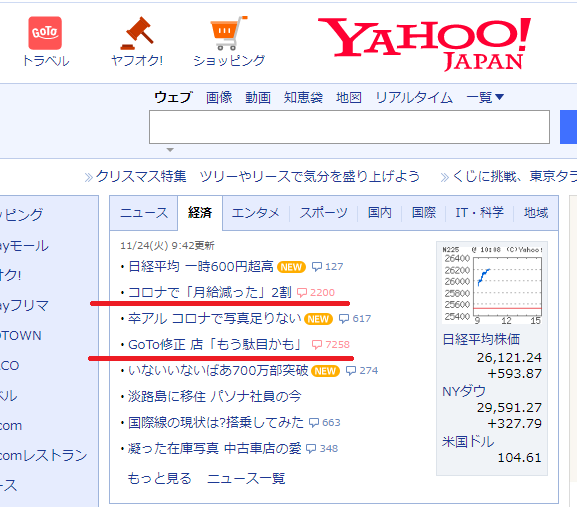 While the shops are saying, “Maybe it’s going bankrupt …”,

only 20% of the regular employees of general companies, who are protected by the employment adjustment subsidy, have their salaries reduced … !!

(70% of those people say that their salary does not change)

What … the difference in impact you feel in the headline!

We want to survive somehow …

It’s only a few months to half a year before the vaccine. Let’s work together to survive!