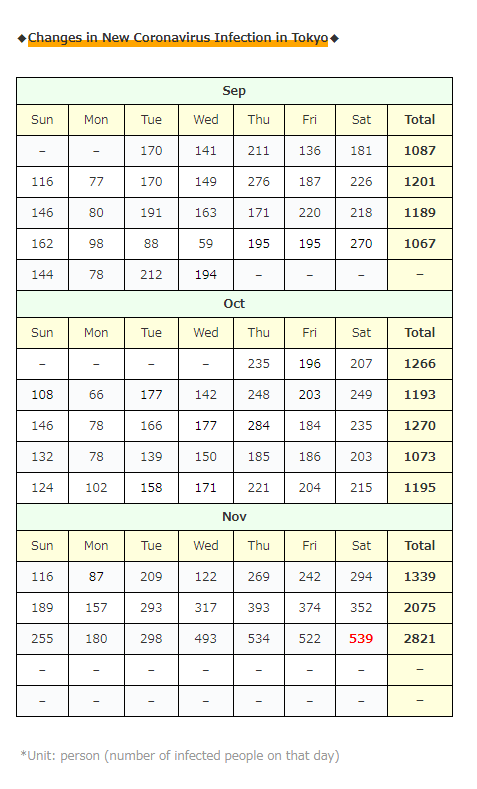 (* The number of seriously ill people has also increased …)

Today is Saturday, so I calculated the weekly total of the usual  “COVID-19 Trend Calendar in Tokyo”, but 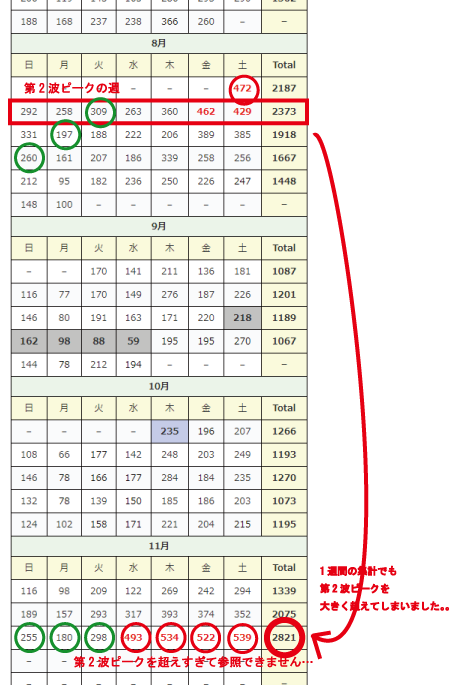 Please do not increase the number of infected people next week ~~~~!  (Cry)

*According to the person in charge of the city, “It is not biased to a specific area, but is expanding to a wide range.”

・Outbreak of restaurant  with karaoke in Shizuoka City [4] person(s)

* It seems that no outbreak has occurred today, but what happened to “THAT Iwate (who survived the first wave with 0 people)” …………

This is the fear of “infectious diseases” …

It spreads in an instant … 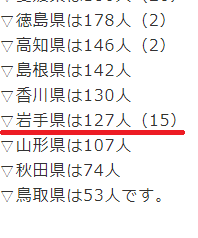 * It should have been the least, but it will go up steadily … 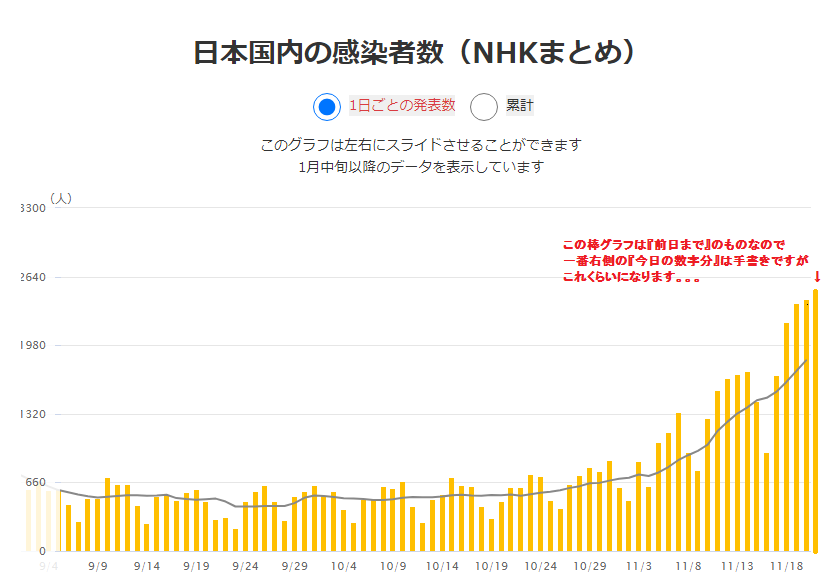 The number of infected people in Japan is increasing at a tremendous pace …!

By the way, last Saturday there were 1735 people.

The infection has spread too much this week, and 1700 people seem to be far below …

For me, even “when it was a long time ago peace”, I think of last week …

Even though 1735 people were scared last Saturday with “Updated of the highest number of infected people in Japan!” … 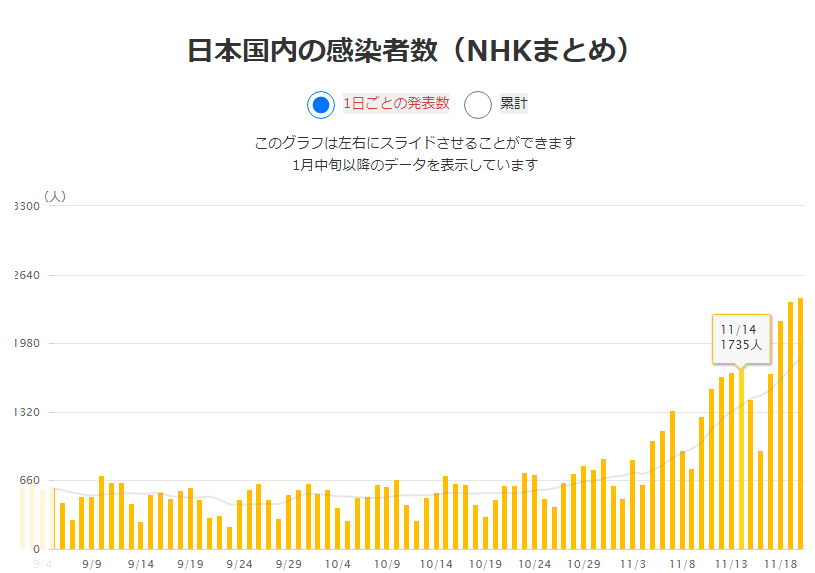 By the way, in Japan in such a situation, in the Toyosu market where the movement from the Tsukiji market became a hot topic,

from the first infection confirmed on August 15th to yesterday 20th, the infection has continued to spread, with “a total of 114 people and unknown infection routes are 100 people” …

It seems that there are “areas where infections are concentrated” that are difficult to judge as outbreaks in various places like this.

And it’s about time that the word “medical collapse” has begun to appear in various news programs and online news!

Of the 4 stages of government infection,

“bed utilization” has already exceeded “stage 3” in many areas…

There are so many more dangerous areas than Tokyo, where the number of infected people continues to be around 500 every day …!

This “judgment of the government’s infection status” is decided by “comprehensive judgment” that also considers the number of infected people, so just exceeding the “bed usage rate” does not officially become “stage 3”. However, you can see that it is as close to Stage 3 as possible …

And in such a situation, yesterday, a subcommittee on measures against the government’s new coronavirus infection (COVID-19) was held!

The expert teachers of the subcommittee finally told them!

“We want to not only rely on individual efforts, but also expect the government to respond more strongly.”

“We sincerely request the government to review the operation of the Go To (Travel) campaign.”

Experts have pointed out to the government, “Take proper measures!”!

I can’t say anything because the government may have just wanted an excuse to “take strong measures”,

(The government may have just wanted a reason, such as “Because the subcommittee says,” so that the public will not criticize them when they cancel the campaign.)

in any case, I hope that the government and the general public will once be in the direction of tightening their minds!

By the way, in the subcommittee, the results of this time are summarized as follows!

・Originally, experts in the subcommittee made recommendations like this.

“Stage 3” -Refrain from going out to restaurants that serve alcoholic beverages at night and refrain from moving to areas where infection has spread.

“Stage 4” -Forced response such as a state of emergency

・The current situation requires strong measures for “Stage 3” in some prefectures.

・”Go To Travel” needs to be excluded from some areas

Regarding this, Minister for Economic Revitalization Nishimura, who is a leader in measures against new coronavirus infections in Japan, said at a press conference after the subcommittee.

(About “Go To Travel Campaign”)

“Immediately consider national measures based on the opinions of experts”

“The state of emergency was not discussed among experts.”

“Take strong measures at this stage to prevent a state of emergency.”

“(To the people) I would like to ask you again that the mask was important.”

The chairman of the Tokyo Medical Association also said, “Medical collapse will occur when the number of newly infected people reaches 1000 per day.”

As he said, infectious disease specialists and people in the medical field are saying that this is the limit, so I hope the government will take measures here…

By the way, in the voice of the city …

As a result of the recent spread of infection, about the reservations of 3 concecutive holidays, accommodation facilities, restaurants, and travel agencies have been canceled one after another, and it seems that many events have been canceled or postponed, and working people are even scared.

It’s a place where the government will provide solid compensation, and we all want to unite and settle the infection “completely” and then recover in earnest!

The number is increasing around 1000 every day. ..

There is too much (negative) news every day and I can’t tell you the news I want to introduce at all!

But I have to tell you this! And finally here … 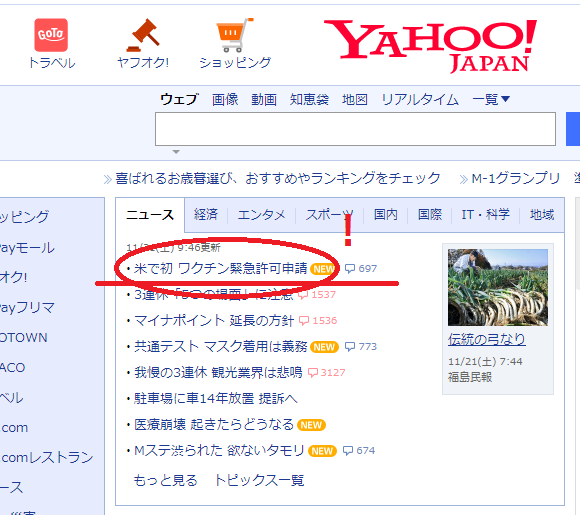 (*”The world’s first emergency vaccine application in the United States”)

Regarding the vaccine for the new coronavirus (COVID-19) that was under development by Pfizer Inc. in the United States, I told you the other day with excitement that “Pfizer’s vaccine has finally completed clinical trials !!!”, but as early as yesterday It seems that he applied for permission for emergency use in the United States on November 20th! !!

This new coronavirus (COVID-19) vaccine with “95% efficacy” is said to “take several weeks to approve”, but it may seem long, but in mid-December It will be approved in the United States!

And, according to US Secretary of Health and Welfare, “we are ready to start supplying in the US within a few weeks.”

Also, according to Ugur Sahin, CEO of Biontech who co-developed this vaccine with Pfizer, “If all goes well, distribution can be started before Christmas!”

The vaccine being developed by Pfizer will come to Japan a little further (until the spring of 2021), but first of all, this new coronavirus infection (COVID-19) is “not a scary disease anymore! It’s a big deal just to know that!

Well, I want to say to people in Japan, where the infection continues to spread, “The solution is just around the corner, so be patient here!”