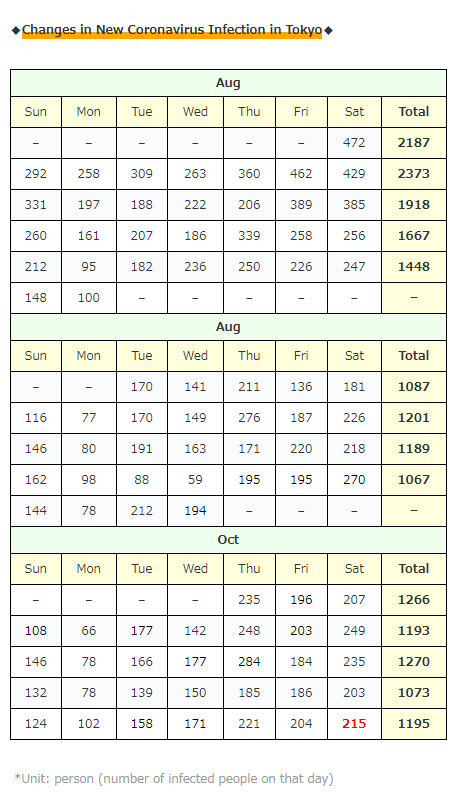 I’m glad that the number of new infections in Tokyo has simply decreased!

Every Sunday, I’m always afraid that “What if it doesn’t decrease …”, because the number of infected people is high on the previous Saturday.

・Infection at a dinner with friends and acquaintances [2] people

First of all, overseas topics!

Moscow, the capital of Russia, seems to be considering vaccination of the new coronavirus (COVID－19) for the general public as early as next month!

Two Russian vaccines have already been officially approved in Russia (although none have been clinically tested) and have already begun to be given to healthcare professionals and school teachers!

It seems that 44% of Russians say they will not be vaccinated, and because of the outbreak in the last parliament, I wonder that “Is the vaccine really effective?” but what will happen?

However, it would be great if this dramatically reduced the number of new infections in Russia!

By the way, in the UK yesterday,

Prime Minister Johnson has made a lockdown, announcing the suspension of store operations other than the sale of daily necessities from November 5th to December 2nd, and calling for an unnecessary and urgent outing.

Restaurants and bars are also closed, and the school does not seem to close.

And … finally, even Germany (which hasn’t been much news in Japan so far) will have a partial lockdown for four weeks starting November 2nd …

Not only restaurants and bars are closed, but gyms, sports facilities, movie theaters and theaters are also closed.

The government has decided to relax new immigration restrictions, which are being implemented from November 1st today …

・For “Japanese” and “foreigners with a status of residence in Japan”

・Movement is only round trip between work and home

In the first place, there are many cases where “the test after returning to Japan was negative, but the test was positive afterwards”, and other than entering and leaving Japan, “the test was negative at the outbreak facility, but it became positive a few days later.” Even though there are many cases like this in the news, it’s pretty scary to lose the safety measure of “requesting home for 2 weeks” …

Let’s have all the government members go on a trip to Europe to see the current situation in the world!

Recently, the number of newly infected people in Japan (nationwide) is unusually high, so I would like to introduce some data.

While quoting the data from NHK’s new coronavirus infection site, I added some notes! 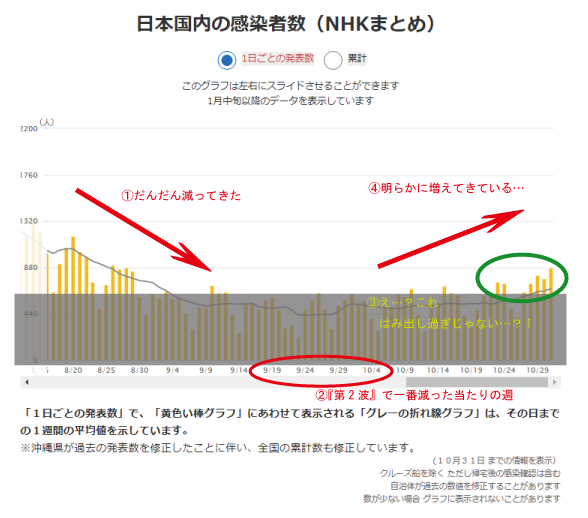 * Please forgive me for the typographical error… lol

This is a bar graph of the daily number of newly infected people in Japan, but I have noticed some things …

* By the way, the black part of the image is based on the “day with the most infected people” in “late September when the number of newly infected people was the least”,

The day when the number is higher than that number is easy to understand and extends beyond the black part!

The following is what I learned by looking at the bar graph.

①It was steadily decreasing until the end of September.

② After all, there were few around the four consecutive holidays in September.

③The number of newly infected people these days is clearly too high in the last two months.

(Too much beyond the black part)

The “Second Wave” that started in June was originally around the time when the government was easing after easing,

(ex : May 25, the state of emergency was completely lifted nationwide, school resumed from June 1, and gradual relaxation on June 12 and 19)

I hope the infection doesn’t spread like that time …

I hope the government will look at the situation in Europe and feel a little bit of a crisis. ..

The days when more than 100 people increase …

Today, all the topics are uninteresting, so here’s a little fun (?) Topic …

When I was looking for news related to the new coronavirus (COVID－19) as usual, I found an article titled “All train advertisements were twoosed” …

(* twoos = A quick one-liner that a Japanese comedian raises his index finger.)

They are “twoos” more than I expected! lol

Today, when I looked up and had only negative topics, I was a little relaxed!