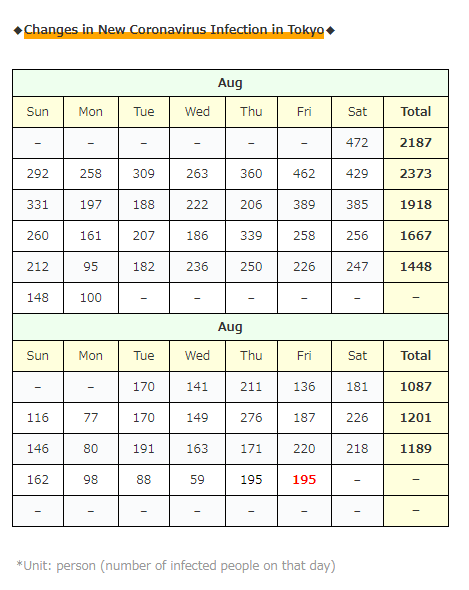 The number of new infections in Tokyo is rare, 195, “exactly the same” as yesterday!

After the holidays + last week was too much

→It is said that there are many infections in the home.

→Nosocomial infection at a medical institution in Handa City [1] person

→US military base： [N/A] person

As I briefly mentioned yesterday, it seems that a fairly large outbreak has occurred in Tokyo.

At the Kasai factory of “Takara Food Industry” in Edogawa Ward, [78 people] are currently confirmed to be infected with the new coronavirus (COVID-19) …

In the middle of this month, infection of 5 female employees was confirmed, and PCR tests were performed on 314 employees and related persons, and it seems that [78] infections have been confirmed at this time.

And it seems that there are 21 more people waiting for the test results.

(Addition: Eight people were confirmed to be infected today, bringing the total to 86 people.)

It seems that this factory makes sandwiches and is obliged to wear masks and hats (because it is a food factory), but the person in charge of the company also said,

“I do not know why it has spread so far.” You are saying …

I was surprised (fear?) Because it increased too much even when I thought about “after the holidays”, but among the 78 people with this outbreak, 39 people were included in yesterday’s count. apparently…

I think that influenza rarely spreads to this extent, so the infectivity of this “new coronavirus (COVID-19)” is tremendous. ..

Now the next topic!

This is an article about a man,

“The Japanese government has begun to consider lifting restrictions on immigration for people all over the world,”

Rest assured, “yet” not that bad.

Only those who are expatriates of companies, international students, medical / education personnel, etc. who are allowed to stay for a long time by the government can enter the country.

Foreign tourists are not yet admitted to the country.

By the way, it seems that the number of immigrants is currently limited to “1000 people a day”, but 16 countries such as South Korea and China, which are currently under negotiation, are considering making it possible to enter an additional “up to 1000 people a day”.

This “immigration easing” includes a “two-week isolation request”, but since it is not very enforceable, how effective is it? .. I’m a little worried.

And there are about 2.9 million foreigners with a status of residence in Japan, including permanent residents and long-term residents (international students).

And in connection with that

ANA seems to resume round-trip flights to and from China once a week, apart from the one currently in service, from September 30th.

JAL has increased the number of flights it has been operating to 2-3 flights a week from September 18, and it seems that it will resume round-trip flights to and from China from October 2 to 1 week.

What will happen in the future … We need to be careful.

Even so, why does the Japanese government get rid of it a little early?

One month later, after the control was completed, the Japanese government should accept foreigners and do “Go To ~” …

And there was some news about that “Go To ~” today!

The five prefectures of Tokyo and neighboring Saitama, Chiba, Kanagawa, and Yamanashi have called on businesses and users to thoroughly prevent infections in the “Go To Travel Campaign” to and from Tokyo.

Also, at the government subcommittee of the new coronavirus (COVID-19), which was held for the first time after the inauguration of the Kan Cabinet at noon today, Minister of Economy Nishimura “requested that he give cautions regarding the addition of trips to and from Tokyo.“

↑ I have just introduced two articles, but rather than wanting you to see the contents …

I would like you to know that it is said that the start of the “Go To Travel Campaign” to and from Tokyo has already been decided.

I also live in Tokyo, so while I’m happy, I’m not happy …

It’s a fun campaign, so I wish I could do it “after COVID-19 is gone and I’m more happy”. I don’t even know if COVID-19 is going to control, so I’m not happy with this campaign.

The people of Tokyo and people in other areas are too complicated, aren’t they?

Luxury accommodations that cost more than 40,000 yen seem to be more popular than cheap hotels such as business hotels and private lodgings and lodging facilities.

In luxury inns with open-air baths in the rooms, the baths are individual, so there is a sense of security and it is said that the rooms are “full.”

It seems that luxury hotels also have the image that “because it is high-class, infection control is perfect.”

In any case, the people who can go on a trip now are probably those who are not so affected by the economic impact of the new coronavirus (COVID-19), and they may have saved money as they refrain from traveling.

And by the way, regarding the “Go To Travel Campaign”

When Tokyo residents travel to Tokyo, it seems that 5,000 yen per person per night will be subsidized separately!

This seems to be a method of selling at a reduced price and applying later by the business operator!

I feel like I’ll use it for normal play instead of traveling, but it would be nice if I could contribute to the economy anyway!

Regarding “going to an event”, it seems that you can buy tickets etc. at 20% cheaper at today’s government subcommittee, and you can fetch goods purchase coupons equivalent to 20% of the ticket fee! (* The maximum amount of subsidy is 2000 yen)

In addition, it seems that online events are also included! 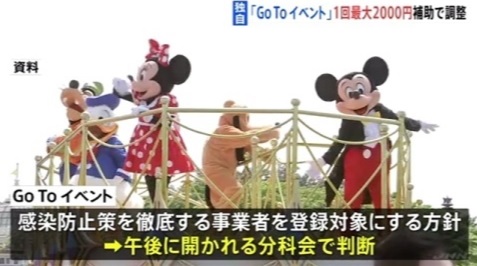 Also, regarding “Go To Shopping Street”, apparently there was no talk of discounts to consumers …

It seems that up to 3 million yen will be subsidized to one shopping district when creating a site to post local special product introduction events and take-out information.

If this is the case, there is not much benefit to consumers = shopping streets, but on the contrary, it seems that there are benefits to design shops …?

Now, the next topic!

President Bach of the IOC (= International Olympic Committee) seems to be motivated to hold the Olympic Games in Tokyo!

Recently, such news has increased!

Well … so far! It’s still “half” of what I want to introduce today! lol

Thank you to everyone who has read this far, and for always reading!

About 400 people have decreased today!

The number of infected people on a daily basis may be smaller than in the world, but now that we are moving toward control, I think that the number of people in Tokyo and the whole country is a little higher per day.
How is your country?
When you take all possible precautions and measures to get rid of this new coronavirus (COVID-19) infection, and then ｄefeat it, let’s meet with a smile!