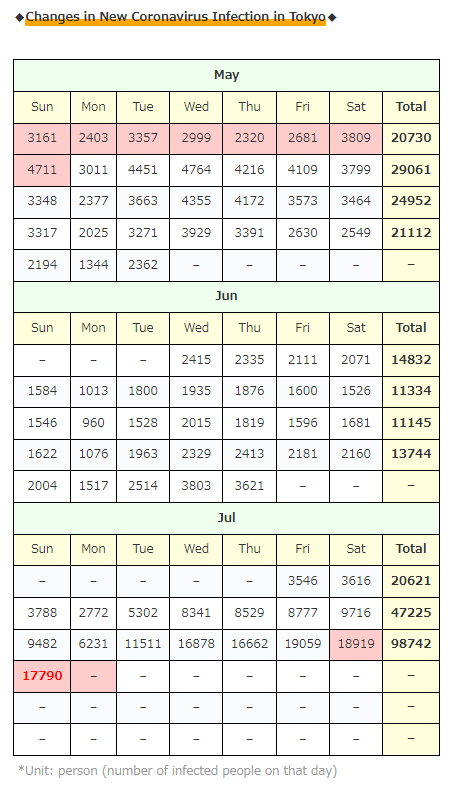 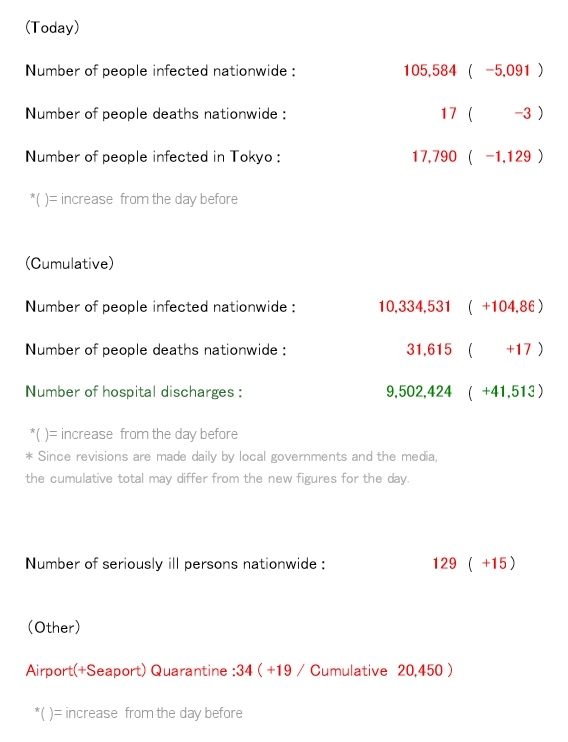 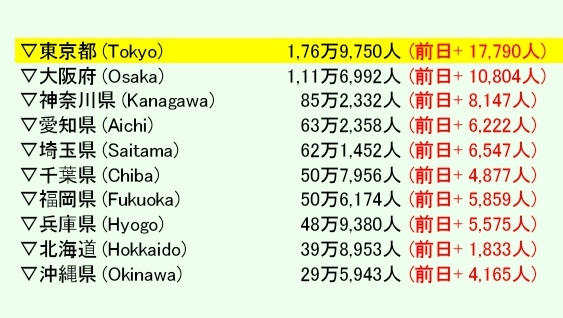 Therefore, the numbers will decrease until the 19th, and after that, a large amount of information on infected people during consecutive holidays will be announced, well … it’s too easy to predict what will happen … 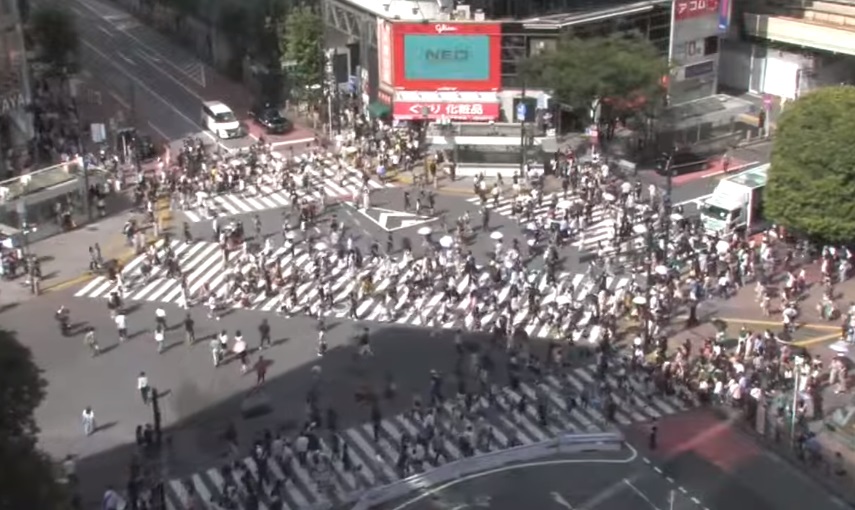 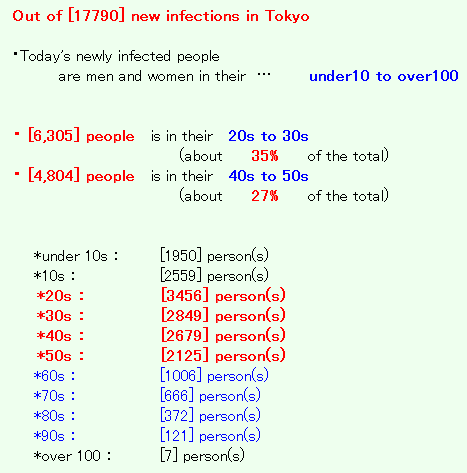 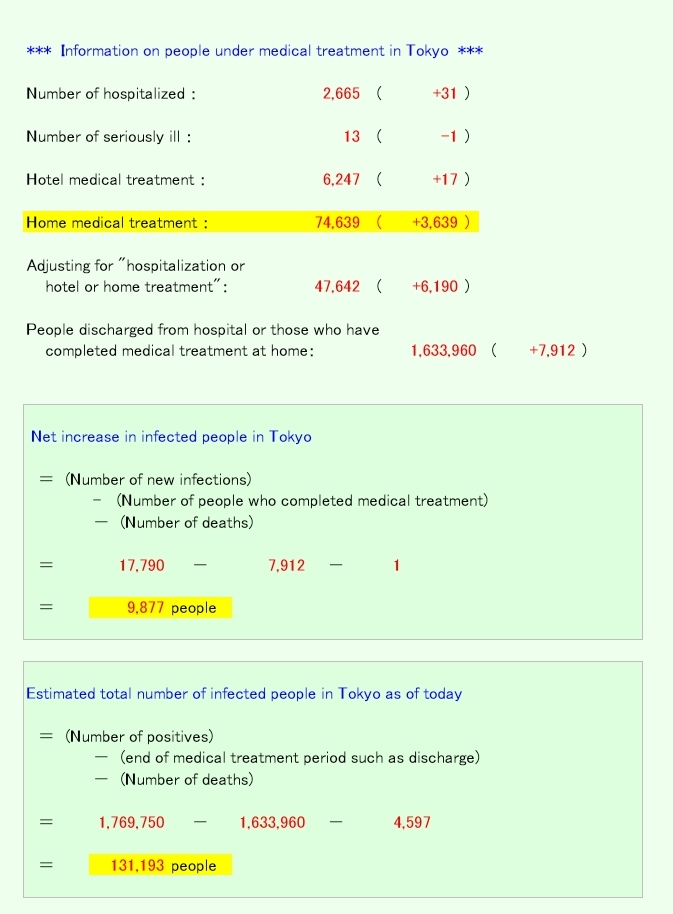 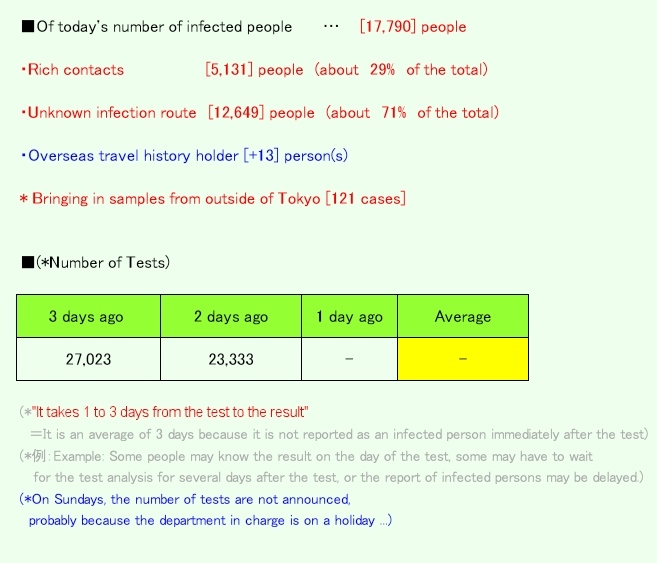 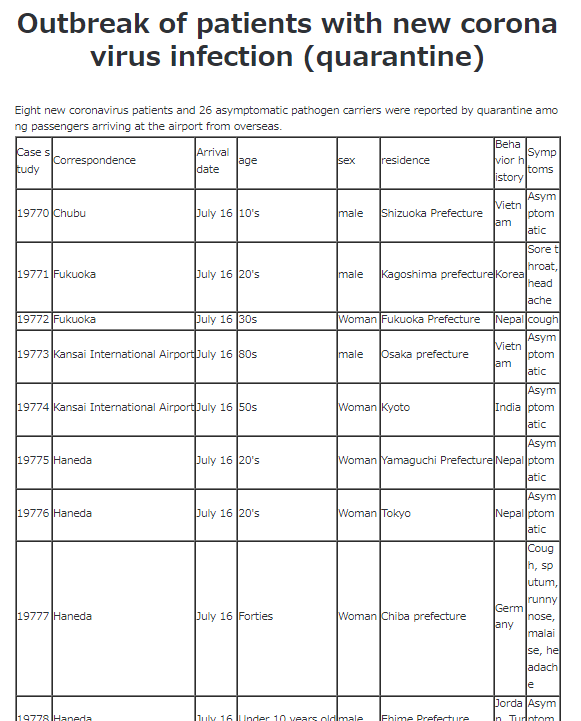 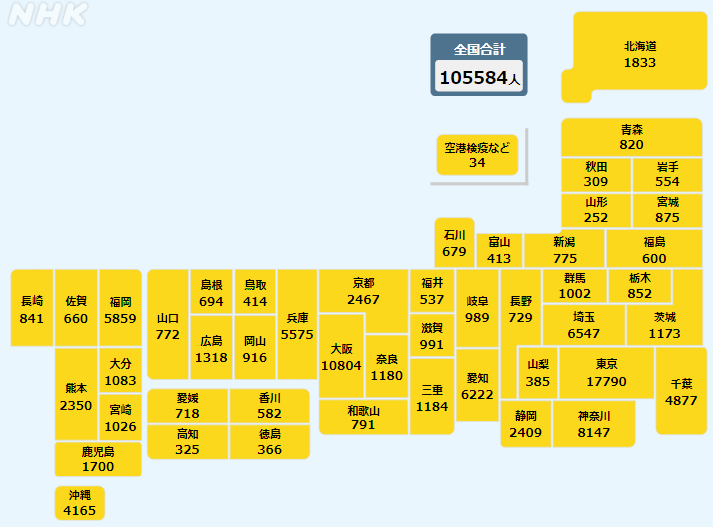 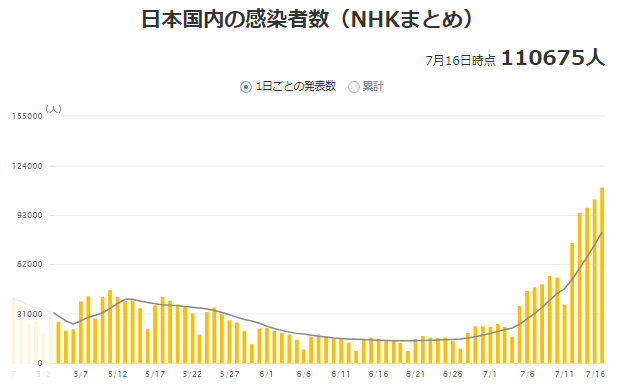 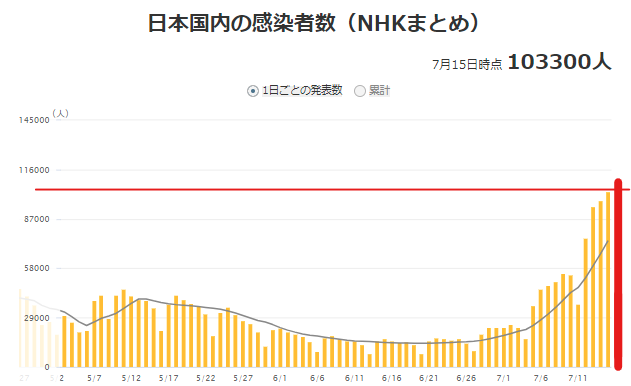 In addition, there are so many areas in all prefectures that have recorded the worst number of newly infected people in the past.

(Number of newly infected people in all 47 prefectures) 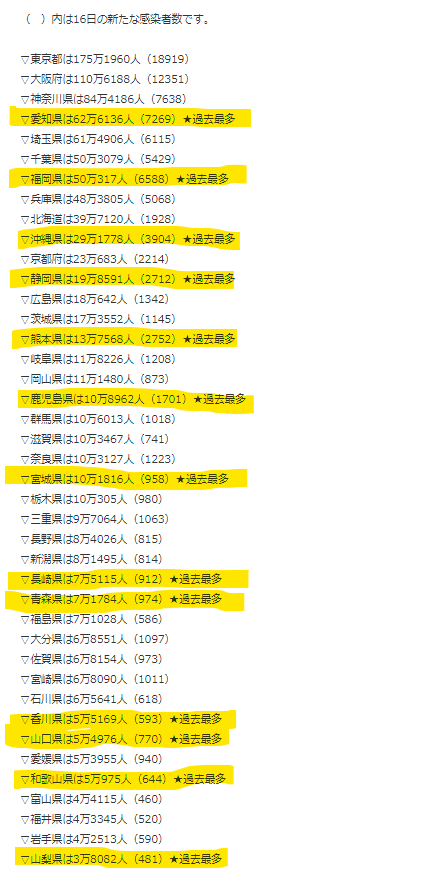 By the way, an expert of the government subcommittee who boasted,
“You don’t have to restrict your behavior! There is no problem if you follow only the basic measures against infectious diseases that we are talking about!”,
said as follows…
“It may reach 200,000 people next week,”
He says it as if it had nothing to do with him …

“People have become more active in July, the effects have diminished over time since the third vaccination, and the spread of BA.5. This has led to a rapid increase in the number of infected people. “

“In the situation so far, for a while
We have to consider that the number of infected people will continue to increase. “

“As a countermeasure, do not go out when you are not feeling well, take an active test, and be careful about meeting people who are at high risk of becoming seriously ill!”

↑Despite their position to implement countermeasures in Japan, and despite the fact that the outbreak of infection is expected and is known to increase to a terrifying number in the future, they do not try to prevent the spread of infection at all, and also they say that there is no need to take any measures in the future …

And the government and the people who do not want to take any measures are saying, “It’s okay because the number of seriously ill and dead is small!”, but the actual situation seems to be like this ↓

Ex) woman in her 50s in Tokyo
→She cannot make a reservation for a medical institution even after she becomes ill, and it takes 3 days from fever to be diagnosed as COVID-19 positive.
(At one point, her fever exceeded 40 degrees and she was about to become conscious)

→She called the fever consultation center in Tokyo and asked her to introduce multiple hospitals, but she couldn’t connect to those hospitals at all.

→The symptom was like the worst time of influenza came at once. She has a pain in her whole body and couldn’t go to even the bathroom

↑Still, by Japanese standards, she is not a “severely ill person” even if she suffers so much.

(Details of infection in Tokyo-yesterday, July 16) 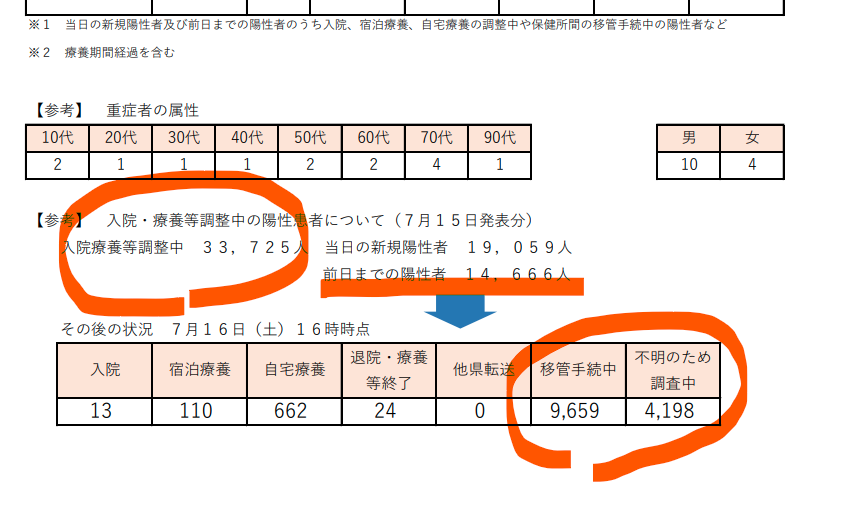 ↑In Tokyo, even if an infection is found, more than 10,000 people have been left undecided for at least one day.

“It’s okay because the number of seriously ill people is small!” They said.

…… I hope that the number of cases of dying while suffering and not finding a hospital as described above will not increase. 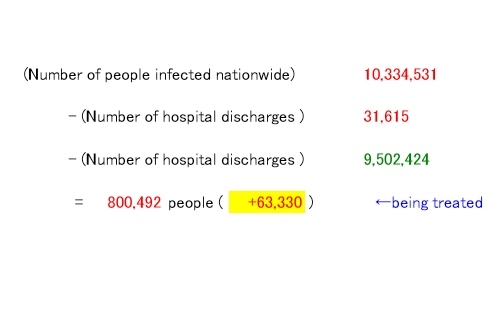 By the way, it is already common sense for everyone reading this “summary article” that it will take 3 weeks to 1 month for the transition of “explosion of the number of newly infected people” to be reflected in “number of severely ill” and “number of deaths” … 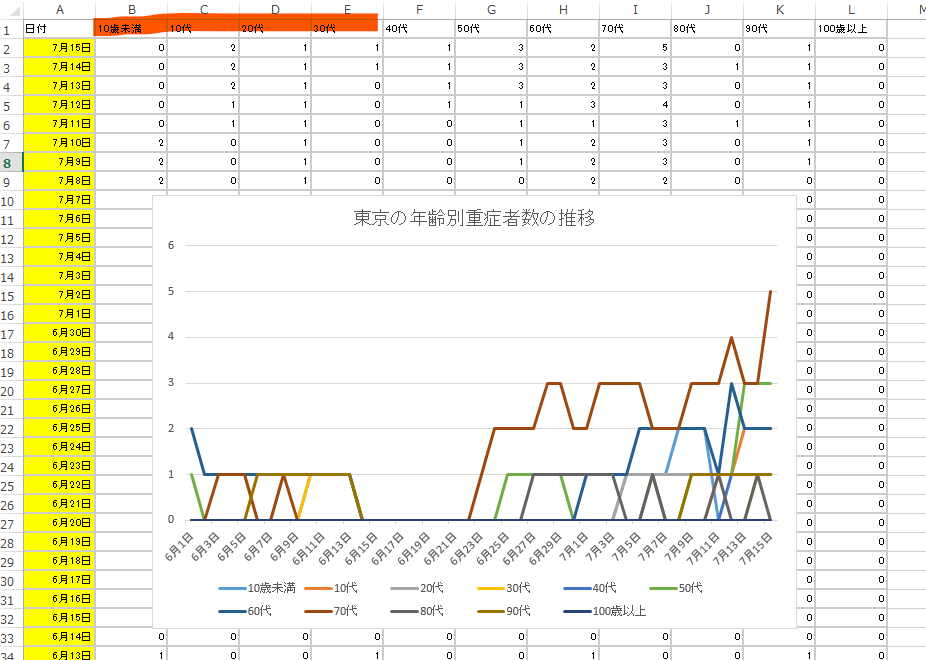 In this 7th wave, which started in late June, the number of severely ill people is gradually increasing.
And also the number of young people under the age of 10 to 20s is increasing without exception.

全国の新規感染者が過去最多を更新 11万676人 新型コロナ – Yahoo!
↑ As with this article, the Yahoo! comment section (= public voice) is already singing a big chorus of “It’s useless to refrain from acting! It’s useless to test! COVID is the same as a common cold!”

Even if it is as toxic as influenza, it would be an abnormal situation if the number of people infected with influenza reaches 100,000 a day, right?

日本政府がやる「蔓延防止など重点措置」
「緊急事態宣言」は全く意味がないと思いますが、
I don’t think the Japanese government’s “priority measures such as prevention of spread” and “state of emergency” are meaningful at all, but
what is needed now is
not “so abandon all measures and live as you please”,
but “so we should take really effective measures to control COVID-19. “