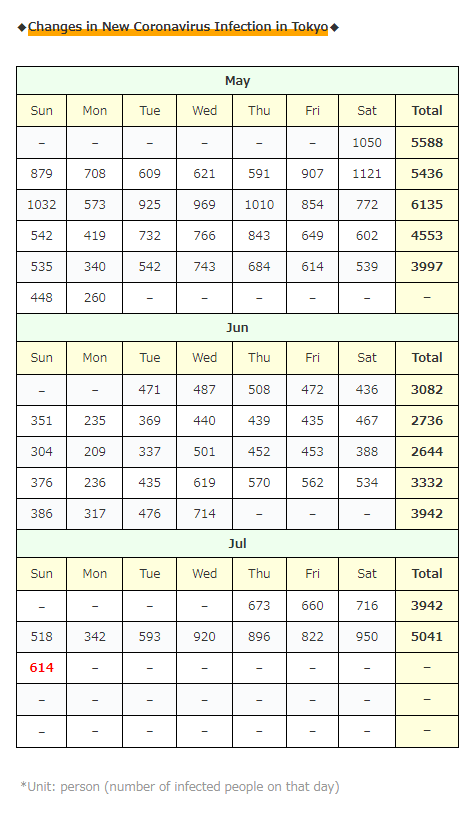 The number of new infections in Tokyo has exceeded 500 on “Monday, the lowest of the week” …

From today, Tokyo is under the state of emergency again, but I hope it will decrease well … 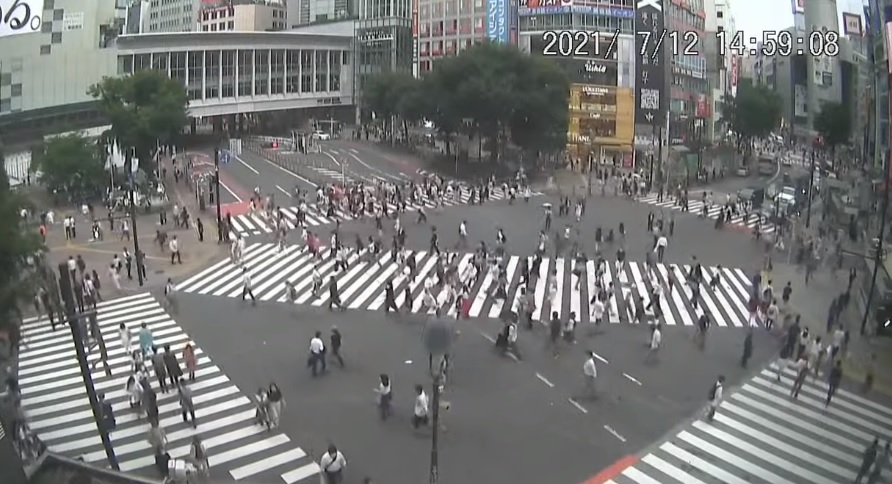 *Details are unknown, but it seems that there are two cluster-certified facilities. 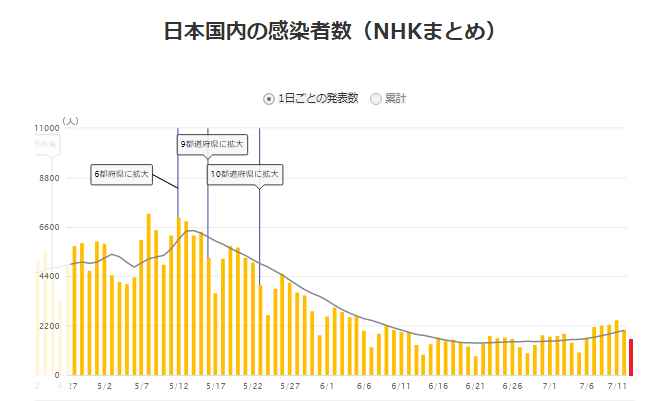 People without masks, restaurants and bars on the street …

If she’s stunned, I’d like her to take advantage of it as a countermeasure … (dry laugh)

However, it seems that the number of people in the city has increased considerably on Saturday, July 10, immediately after the declaration of emergency to Tokyo and Okinawa was decided …

In other areas as well, it has remained almost unchanged during the daytime without decreasing, and seems to have increased by 10% to 30% at nighttime …

Now, with regard to the domestic infection situation, vaccination of the elderly is steadily progressing, and the number of people who have been vaccinated twice is likely to reach 50% soon! 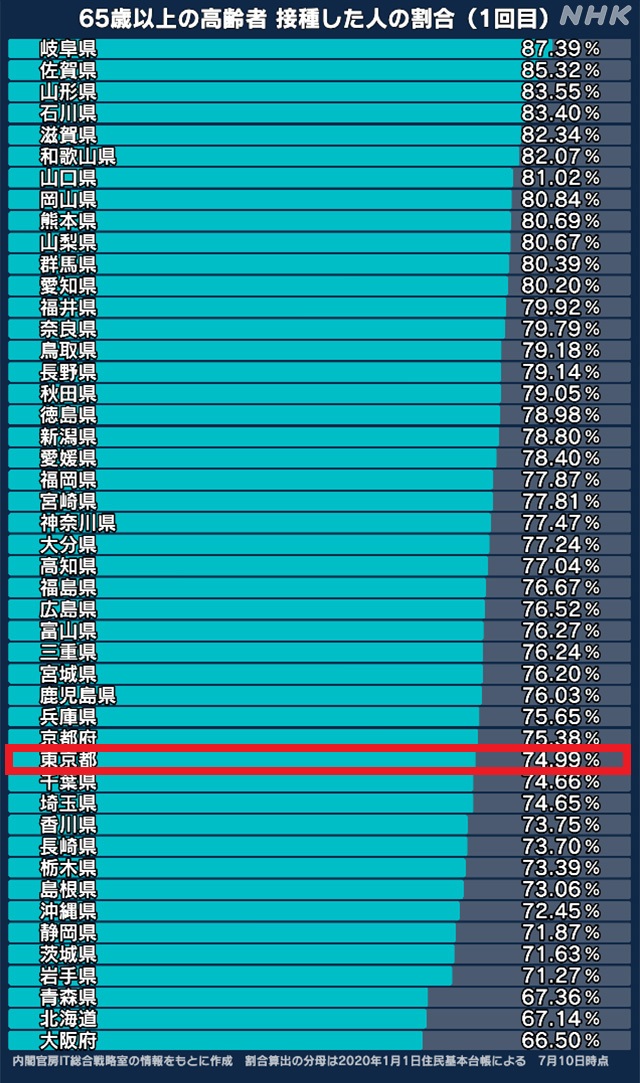 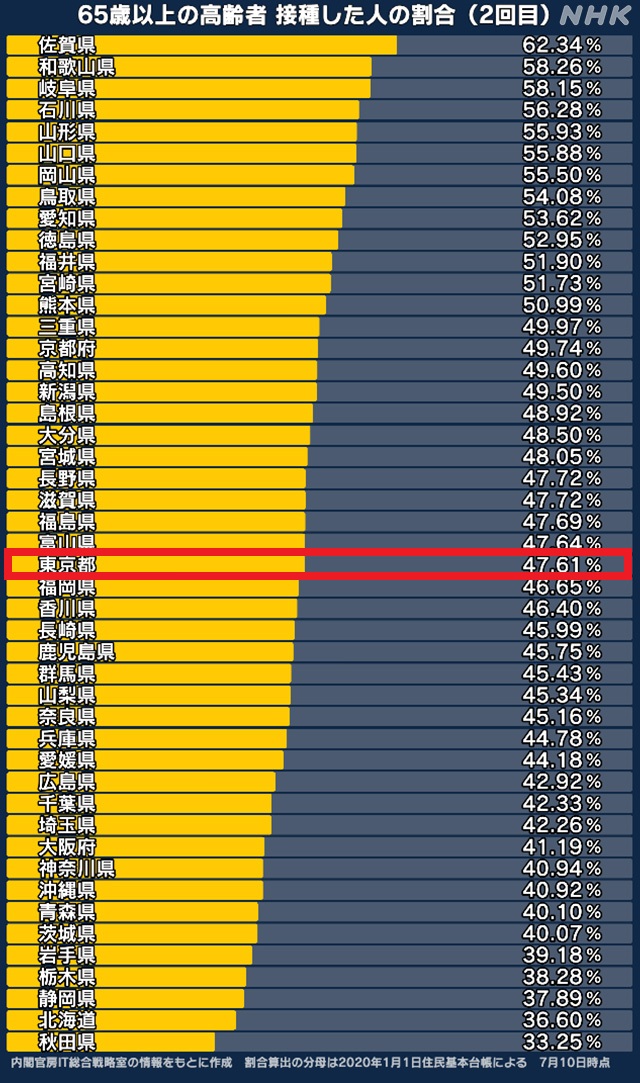 So, I took a look at Tokyo as an example!

By the way, Tokyo is below. 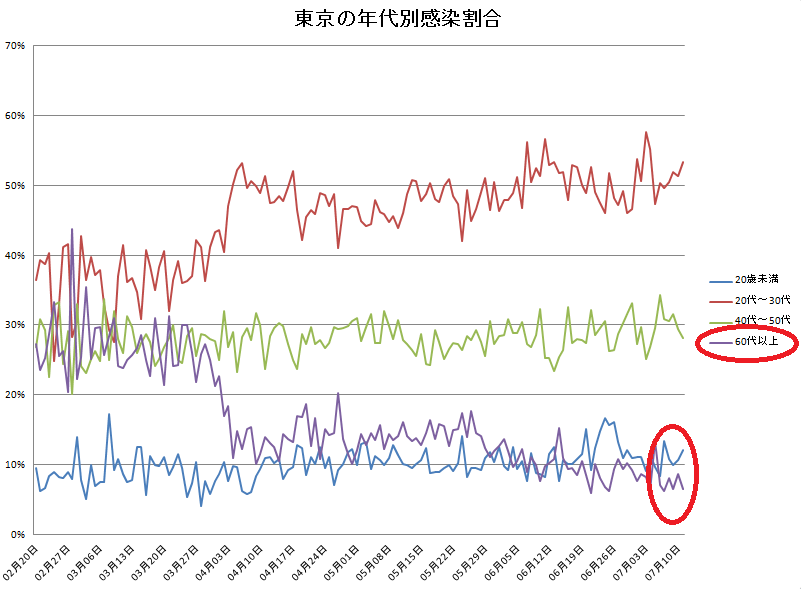 ↑The infection rate of elderly people in Tokyo continues to decrease surprisingly!

(Number of infected people over 60 years old in Tokyo) 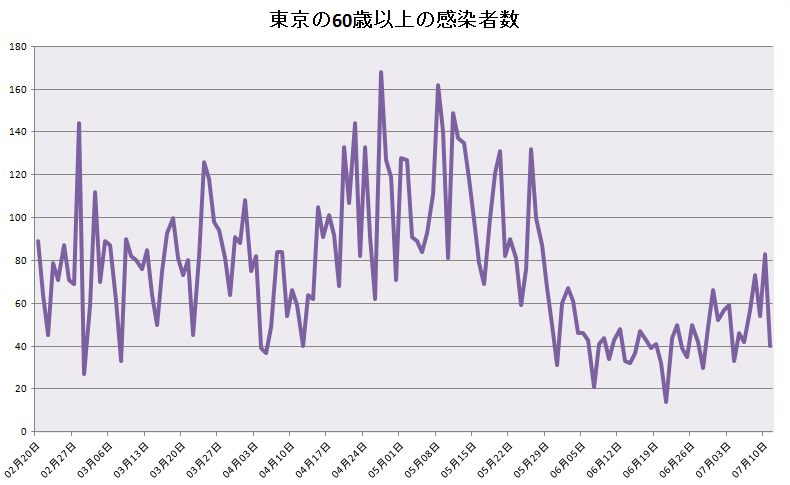 ↑The number of infected people has decreased considerably!
(* Although it has increased due to the recent spread of infection in whole Tokyo, it is still about 5% of the total as mentioned above …!)

It shows that the vaccine effect is tremendous …!

It is a vaccine that has such a great effect and is the hope of humankind, but there was also an article like this …!

It was a very interesting article, so I’ll translate it a little!

(Summary of the above article)

●COVID-19 has the following features.
”Four positive charges are lined up in a virus spike”
＝It does not exist in nature and can only be made in the laboratory
→The theory of origin of the Wuhan Institute of Vase is beginning to cease to be a “conspiracy theory”.

It’s not a news site source, so I’ll just summarize the important things, but there are other interesting contents, so if you have time, please read it!

By the way, based on above article, the next article …

In Indonesia, “Since there are many medical workers who are infected and die even though they have completed both vaccinations, the Indonesian government has decided to vaccinate an additional vaccine from Moderna (USA). “

Vaccination has been completed both times, but the vaccine is not working …

But as I read the article …

Apparently, the “vaccine twice vaccinated” was a vaccine from China’s “Sinovac” …

After the second vaccination is completed, it seems that the immune function will be enhanced if the third vaccination is done (It’s called a “booster”) , but
(*ワクチンの完全接種でブースターは「不要」 ファウチ所長 – Yahoo!)

since it is already 90% or more effective, it seems to be usually not necessary until half a year later.

However, when we see that the Indonesian “government” has decided, it seems that the vaccine must be selected properly …

The vaccines used by Japan are all vaccines that have no problem in efficacy, so it’s safe!

Now, I would like to briefly introduce the remaining three domestic news that I was interested in!

The sponsor company of the Tokyo Olympics is lamenting, “Our company paid 100 million units, but if it is a sponsor, it will be bashed!” …!

This is because public opinion in Japan is negative for the Tokyo Olympics, but even so, it’s too shame …

It seems that the four music groups have jointly issued a statement saying, “If we follow the rules of the government and local governments, we should have the right to hold the event unless there is a request to cancel it from each “government” !”

It seems that live events are being canceled one after another by each medical association requesting cancellation instead of the government.

In the first place, the government should issue a cancellation request …

And it’s good to hold an event, but I can’t say anything because there are some bad examples recently caused by the audience, so… we want to say to the music group that “Can you really control the audience?”

The same mistake seems occurred that the refrigerator was turned off at the vaccination site and the vaccine was discarded again!

Even if you look at the comment section of the article, everyone is starting to doubt someone’s malicious intent …

That’s all for today’s news!

And thank you for reading!