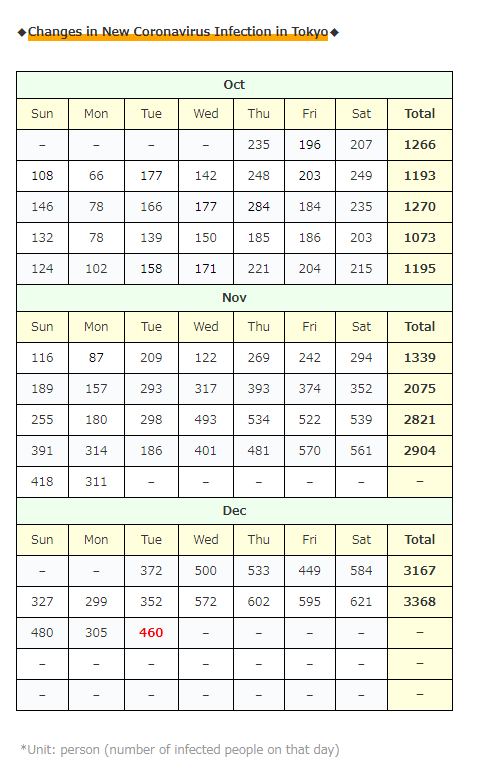 The number of newly infected people in Tokyo is in the 400s even though it is Tuesday …?!

②Is the number increasing in the first half of the week?

③Or will this week’s Wed-Sat be a big deal..?

we can’t imagine it at all… right?

・Infection at a dinner with friends and acquaintances [15] people

* Infection in the facility [28] people

・Outbreak at Atsugi Seikaen, a prefectural facility for the disabled in Atsugi City [1] person(s)

・Outbreak of students attending universities in the prefecture [5] person(s)

* Details are unknown, but it seems that clusters are occurring at hospitals in Fukuyama City … 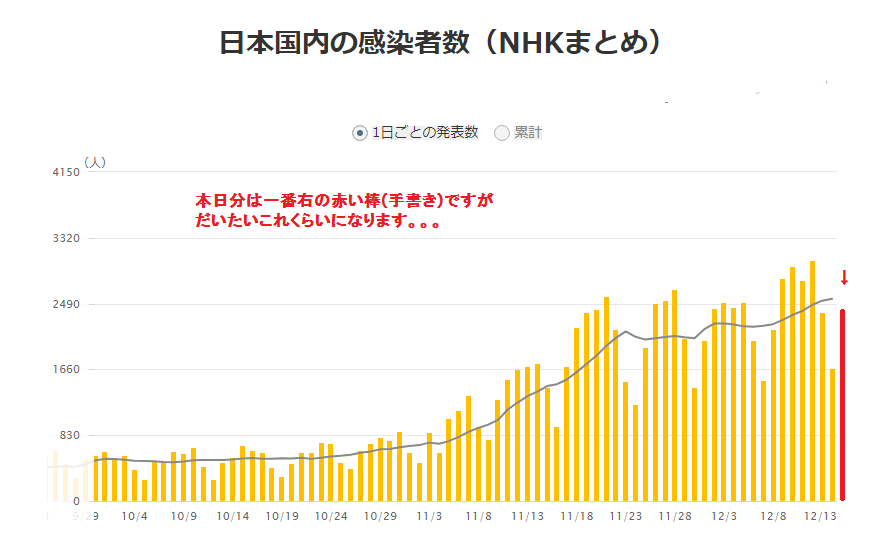 “A variant of the new coronavirus (COVID-19) has been found in the UK that has more mutations than ever before!”

With such news, it’s really scary like that“Is this virus still full of risk?”

In the UK, the alert level is “highest”, the restrictions on behavior are tightened, and it seems that most of the stores are closed except for retail stores and schools …

Meanwhile, in Japan today, “Go To (Travel) Campaign” was full of topics of uniform suspension nationwide!

There is new information on various sites and news little by little, so I will briefly summarize the information so far!

About “Go To (Travel) Campaign”

■From December 14th to December 27th

Only “strongly urge not to use the campaign”

■From December 28th to January 11th

Pause “Go To Travel” for all trips nationwide

（Travel including this period is completely excluded）

→Free for the period from December 14th to December 24th *

* It seems that the government will bear the cancellation fee again …

Until now, the government covered 35% of the CXL fee from the GoTo travel project cost, but this time it seems to cover 50%. (Under adjustment)

◆◆◆ Measures and reactions of each local government  ◆◆◆

“Medical collapse has begun in some areas”

”Some nurses even live in hotels and stay overnight so as not to infect their families.”

”The government and local governments are slow to respond and I am not convinced as a medical professional.”

”The medical care provision system is beginning to tighten due to the increase in the number of infected people. This year-end and New Year holidays is extremely important.”

(* Change to store unit instead of company unit)

”I have been consulted by the Minister for Economic Revitalization Nishimura to see if Nagoya City can be excluded from the target.”

”I can’t accept. I will immediately submit a document not to exclude it to the country and prefecture.”

”The prefecture decided to suspend Go To Travel without consulting the city. It’s a shame.”

●Request to refrain from unnecessary and unurgent going out

I tried to summarize the information of the range currently known!

(There were some remarks I would like to mention, but I will pass through today! lol)

It seems frustrating for the governors of each prefecture to be able to make only “requests”, and it seems that they are appealing to Prime Minister Suga, “I want you to amend the law so that we can make a compulsory leave order …”

Regarding “Go To Eat”, it will extend from the end of January to the end of February, and then they seem to issue additional meal tickets with the premium addition reduced to 20% … (currently 25%)

The sales deadline is mid-May, and the expiration date is the end of June.

It would be nice if the vaccine had arrived and the  “new coronavirus (COVID-19) infectious disease”  had finished by then. ..

About this “Go To Travel” suspension

“Has the perception that Go To Travel is not a factor in the spread of the infection changed?”

“At that time, there was a suggestion that the infection would not spread depending on the movement, so that is the same.”

The PM successfully blames the subcommittee, saying, “I came to believe that because of that!” …

I know it’s hard to stop a government business once it’s started, but they should have at least researched whether it was a factor …

Let’s be careful about infection individually as much as possible!

There are days when the number of infected people is low, such as Mondays, but it continues to increase between about 500 and 1000 people every day.

The good news is … it seems that vaccination has begun in the United States!

“In New York, the number of newly infected people often exceeds 200,000 a day, and eating and drinking in the store is prohibited again.”

it’s the situation like that, but it seems that vaccination has finally begun and 25 million doses will be supplied by the end of the year!

(40 million times a year if Moderna’s vaccine is approved!)

First of all, elderly people, medical professionals, and senior government officials are eligible for priority vaccination, but I really envy them! lol

The only hope is that vaccines are getting closer and closer!

I wonder which is faster, the vaccine will reach Japan or COVID-19 will get out of hand due to the spread of infection in Japan …

Everyone, don’t get infected by then,