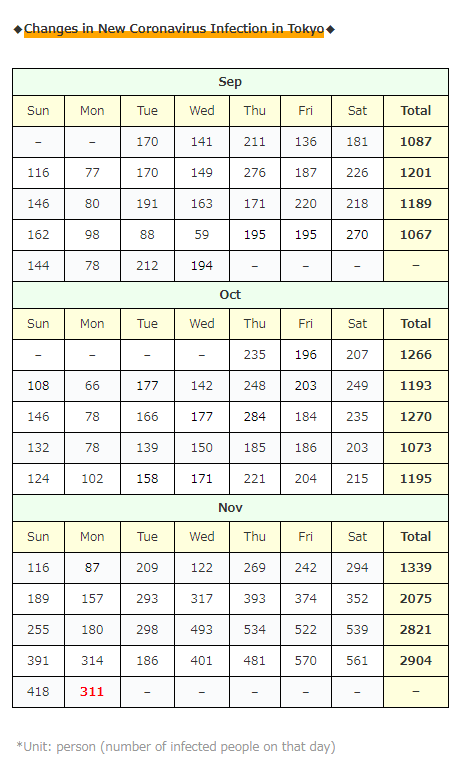 The number of new infections in Tokyo was slightly lower than last Monday. 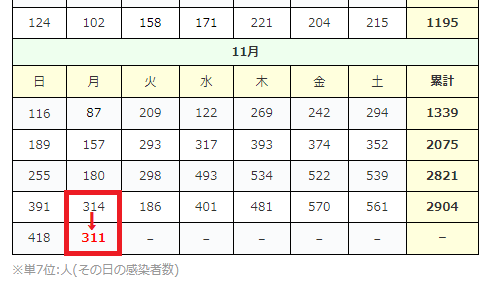 “Monday is the least decrease in a week”,

but even on that Monday today, the number is not less than 300…

・
Outbreak of “Hidamari Cannabis”, a special nursing home for the elderly in Ebetsu City [16] person(s)

・According to Hamamatsu City, a new cluster has occurred.

(* Details could not be confirmed today.) 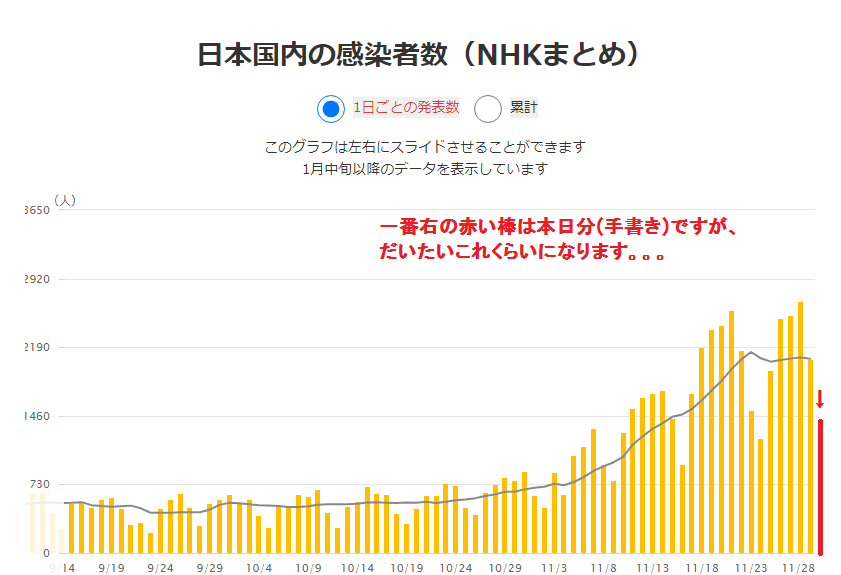 Yesterday and today were Sundays and Mondays, so there wasn’t as much news as on weekdays, but the news that came out was, after all, “request to refrain from business hours”!

Among them, the article was that

most of the “restaurants with entertainment at night” in Ginza, Tokyo refused the request and continued normal business.

A manager of that industry said

“Since customers start coming in around 20:00, we can’t make money by opening until 22:00, so the restaurant collapses and employees can’t pass the year.”

You can’t blame this …

I also want to end the new coronavirus (COVID-19) from the bottom of my heart, so if possible I would like you to comply with the request for shortening business hours, but neither the government nor Tokyo will compensate at all (subsidy is too insufficient), so you can’t just crush your own company where you spent your life …

By the way, regarding this, Professor Toru Hashimoto, the former mayor of Osaka, also said,

“Even when the state of emergency was declared in early spring, there was a debate about compensation, but it was a political negligence that did not create a system at that time.”

“Politics does nothing again and does not fulfill its obligations, so there is no need to sacrifice life.”

However, that doesn’t stop the spread of the infection … it’s a very difficult place …

By the way, the situation on Saturdays and Sundays in Tokyo was also in the news, but regarding to Tokyo Sky Tree,

it seems that it is usually crowded with tourists from all over the country and from overseas, on that days, there were almost people visiting from Tokyo and the neighborhood.

Women in their 80s in Saitama

“I didn’t think Skytree was not so busy.”

“I could hardly travel this year and was stressed.”

“I’ve been thinking that it’s okay to come and visit if it’s nearby after taking proper measures against infection.”

“I was relieved that the infection countermeasures were solid.”

“I’m glad I came because the children were so stressed.”

Yes, self-restraint stress is already at the limit!

Governors said “Be patient for another 3 weeks!” but it is a fact that it is quite difficult to do that. ..

Anyway, it seems that even the Sky Tree was empty.

It’s proof that everyone has put up with it and refrained from doing so. .. ..

It’s a topic of Tottori! lol

(I couldn’t do it because I didn’t have time)

I wanted to put it all together!

This is not a news article, but data created from the information of infected people on the official website of Tottori Prefecture.

◆◆◆ Infection status and route in November in Tottori Prefecture ◆◆◆

It took about an hour to find out! lol

As you all know, Tottori prefecture is the prefecture that suppresses infection most in “3rd wave”, which is too wonderful.

As shown in the figure above, the number of infected people in November was just 19 and it was a great number!

As you can see, except for the three infected people who are painted in yellow (though the 39th case also feels like the 40th contact person …), almost all the infection sources are outside the prefecture.

Nowadays, it is said that the “Go To (Travel) campaign” is the cause of the spread of infection or not, but in this way, the virus has entered the area of ​​”0 people” infected by moving across prefectures.

Looking at the facts, if government really want to end the new coronavirus (COVID-19) infection, they should at least restrict movement, and if the infection spreads by moving, first of all, they should do that campaign after COVID-19 is over …

“Go To (Travel) Campaign” is not the cause of the spread of infection, there is no problem if you take proper measures against infectious diseases

→ As a result of verification for more than half a year, the infection is spreading “now” because it cannot be done.

You have to be compatible with “With COVID-19”

→Because it is incompatible, it is necessary to shorten the business hours “now”

The current situation speaks for itself …

I tried to summarize how the virus enters the “area with no infection” from such “Situation in Tottori Prefecture”.

Anyway, let’s take proper measures against infectious diseases and stop the spread of infection “at our place”!

In Japan, 69% of respondents said they would like to be vaccinated against the new coronavirus (COVID-19) vaccine.

The result is that the Swiss private organization “World Economic Forum (WEF)” conducted an online survey of about 18,000 people in 15 countries!

How did you all feel when you saw this?

I thought it was “much lower than I expected” …

The reasons for those who disagree are as follows.

②The speed of clinical trials is too fast 33%

③that cannot be expected to be effective 10%

“As for worrying about side effects, I do understand that opinion …”

looking at the status of clinical trials (which was interrupted immediately if there was any doubt),

and the feeling of suffering and inconvenience caused by this “new coronavirus (COVID-19) infectious disease” ,

I feel that I want to get this vaccine first! lol

The only thing I can say is that we are finally at the stage where we can talk about vaccination!

I’m too happy with that fact!