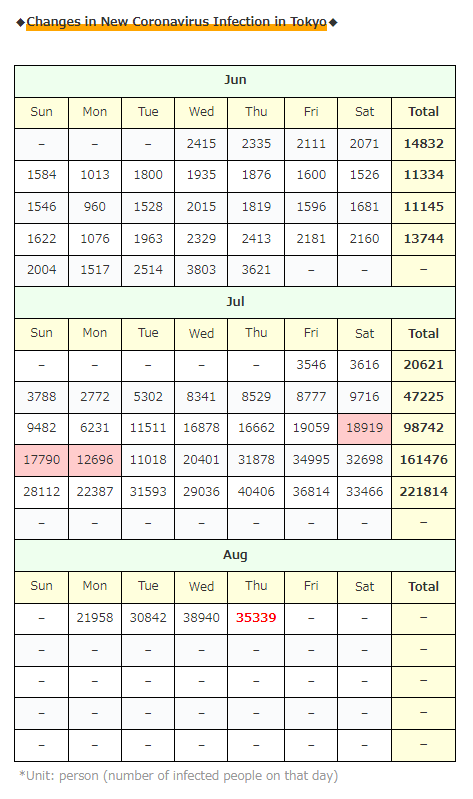 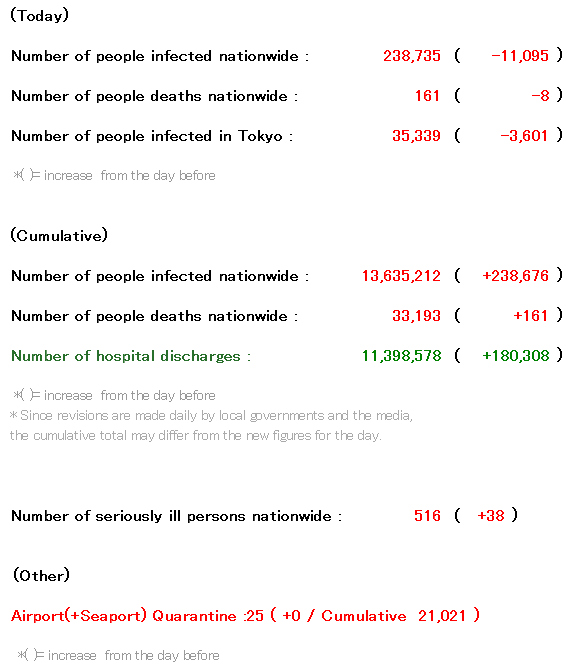 The number of infected people in Tokyo is …
Today (Thursday) last week was a strange day, so I don’t think it’s helpful to compare with last week…

(*The number of infected people announced increases every Wednesday.
But last week, on the contrary, Wednesday was less than the previous day (Tuesday), and Thursday was increasing abnormally.
I wonder if there was an area that weren’t reported on Wednesday? ) 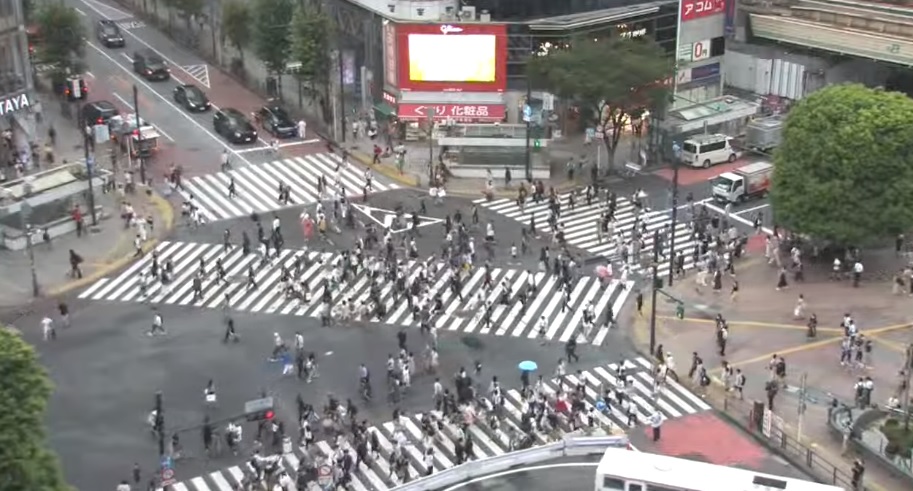 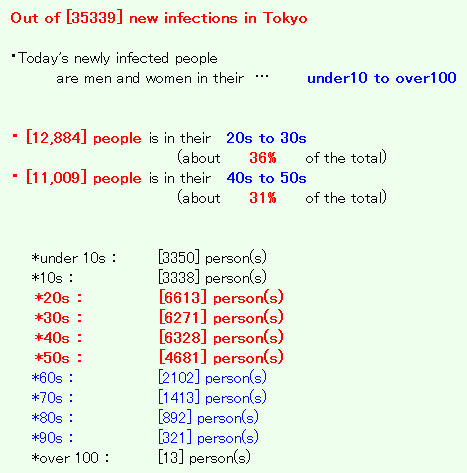 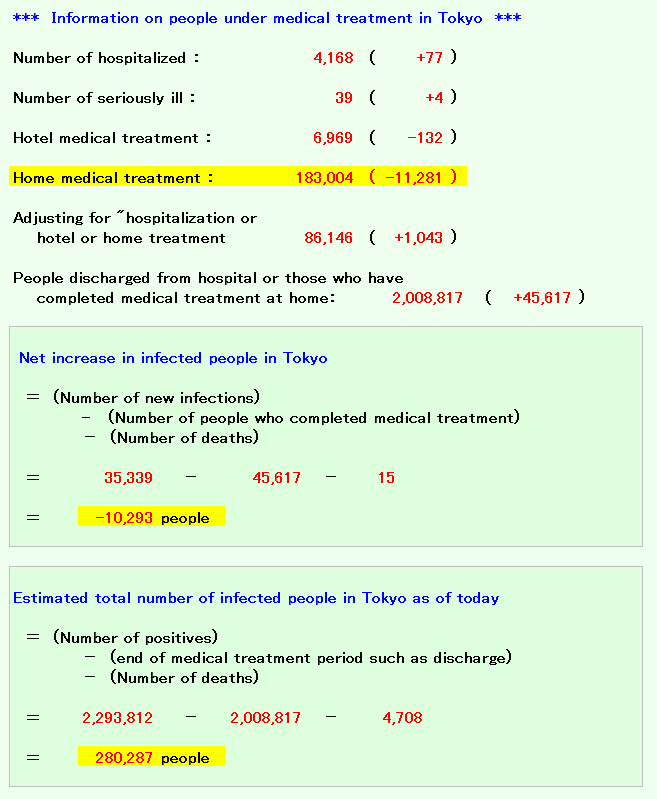 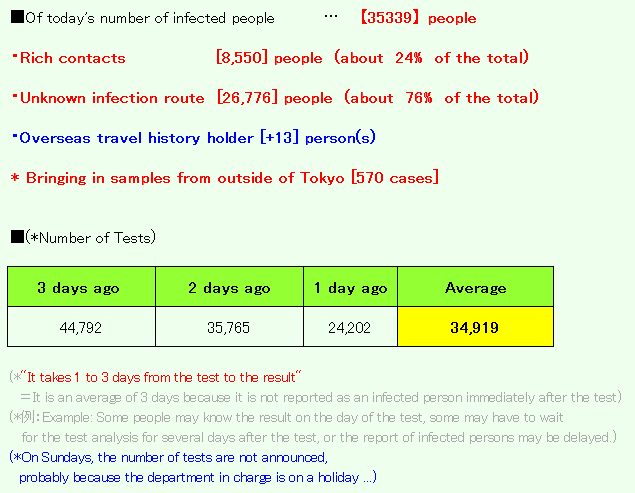 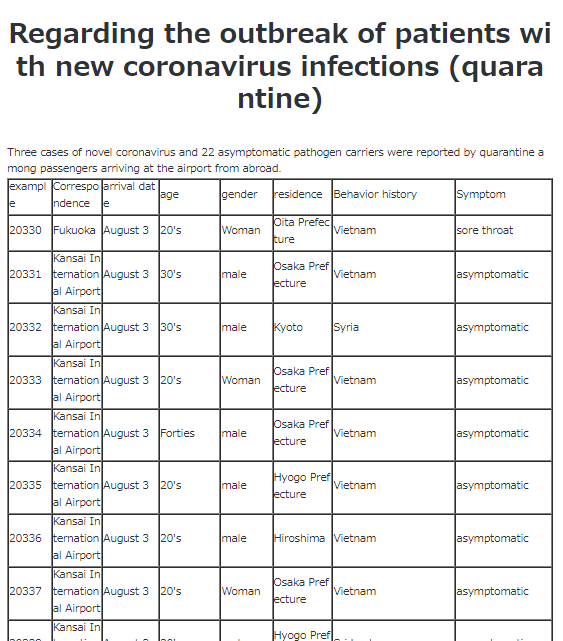 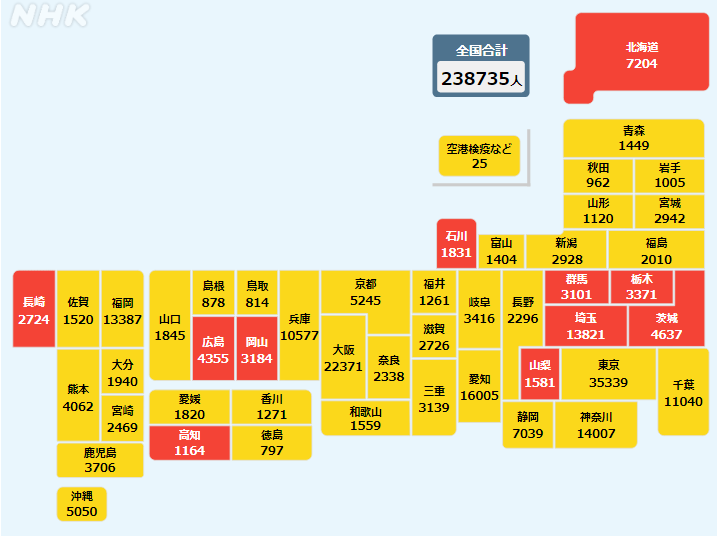 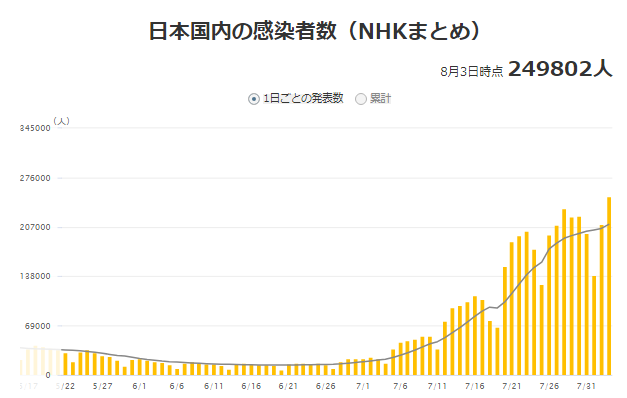 The Japanese government and we have experienced the situation many times in the past, when the infection spreads too much and there is no hospital to accept the ambulance, but this time it seems to be occurring frequently without improvement again…

In Tokyo, there are 400 cases a day of “They can’t find a hospital even if an ambulance comes”…

Furthermore, considering that the ambulance itself is busy and does not come, we should not expect an ambulance…

There is also an article related to this…↓

In Tokyo, a patient with terminal cancer died at home because he ambulance crews were unable to find a medical institution to transport him to.

・An 83-year-old man who was recuperating at home for terminal cancer
・Around 18:00, his family doctor confirmed that he had COVID-19.
・Call 119 → “There are many emergency requests, and it will take about an hour.”
・The ambulance arrived in 20 minutes.
・Even after 3 hours, the emergency transport destination medical institution could not be found.
・Emergency team “I have contacted more than 100 hospitals, but have not been found”
・Inevitably decided to recuperate at home
・Around 4:00 a.m., the man stopped breathing.

The bed occupancy rate is 50%, and the medical system has already collapsed.
That’s why I feel that the government should calculate and announce the “effective bed utilization rate” instead of the “vacant bed rate”.

Even so, the government only responds by…

On the contrary, it seems that the Japanese government will consider changing the treatment of COVID-19 under the Infectious Diseases Law, given the voice of the world.

The reason is not “Because there is already a cure for COVID-19 and it is not scary”.
Perhaps you will be surprised at the true reason…

“Because the burden on medical institutions is enormous.”

Increase the number of infected people without taking any countermeasures, and put as much burden on the medical system as possible, and as a result, just say, “Because the burden is terrible.”, and this infectious disease will be neglected even though the danger does not change at all.

The Japanese government increases it by themselves, and saying, “It’s too much and it’s out of control!”

Can they think of nothing but having fun?

Regarding ↑, Governor Yoshimura of “Osaka, which continues to have the highest number of deaths due to COVID-19 in Japan,” makes such a crazy remark… 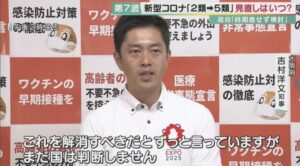 Governor Yoshimura of Osaka
“The Japanese government should stop class 2, but it hasn’t decided yet (angry).”
(*In Japan, there are many idiots trying to reduce the position of COVID-19 under the Infectious Disease Law from 2 to 5.)

阪Osaka has the worst number of deaths in the country because it can’t control the infection and the medical system, right?
Nevertheless, “I want to downplay COVID-19”…?
(= I want to change the classification under the Infectious Diseases Act)
Which mouth said…?