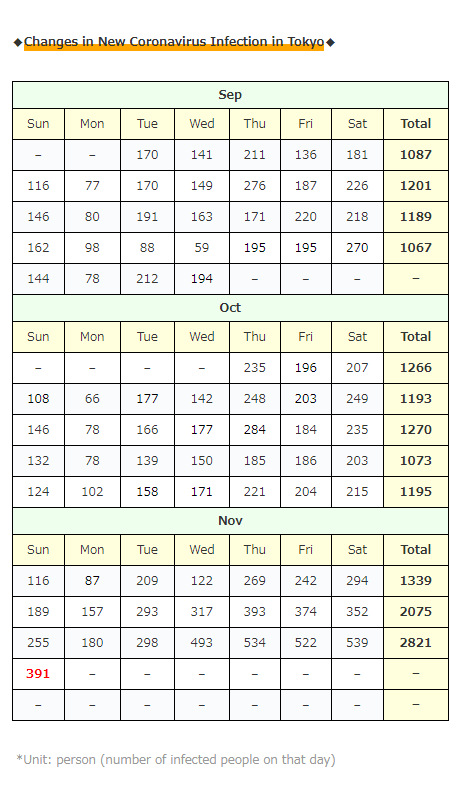 The number of newly infected people in Tokyo is the same feeling as last week, but the number does not decrease so much even though it is Sunday…

And if you look only at Sunday on the calendar, it’s been increasing since the beginning of November …

With a lot of momentum … 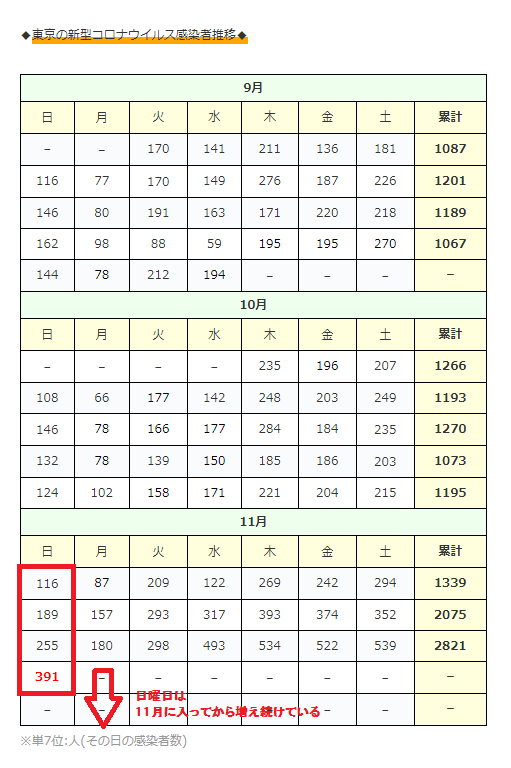 * There were 4 cases (5 people) infected by people who went on a trip and accompanied them, and 4 of them were destined for outside Tokyo.

*It seems that no outbreak was confirmed today …

(Nevertheless, there are still many people …)

* Today’s number of newly infected people in Tokyo is 391, so Osaka is a number that greatly exceeds that …

・Outbreak of restaurant with entertainment at night in Susukino, Sapporo City [3] person(s)

* A new cluster has occurred.

・Outbreak of restaurant with entertainment at night in Susukino, Sapporo City [2] person(s)

*Iwate Prefecture has survived the first wave in spring with no infected people. 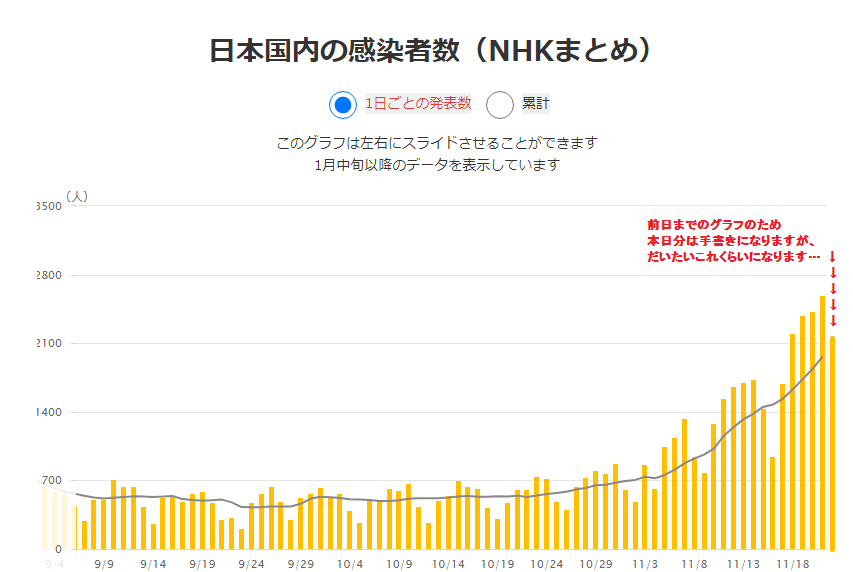 … or rather, the second day is almost over (lol)

The data on the first day was only lightly available, but it seems that the number of people is increasing in about half of the major stations and downtown areas nationwide!

According to NTT DoCoMo’s data, on November 21st, the first day of the three consecutive holidays, the number of people increased from November 14th of the previous week at 44 points, which is about half of the 95 points nationwide …!

I couldn’t find all the data, but as far as I know, it looks like this.

According to the article, “At most points, there was a slight increase or decrease, and there was no significant change in the tendency of crowds compared to before the  holidays.”

Also, in the article by NHK, there was information on traffic jams in various places, but it seems that long traffic jams also occurred as shown below.

At 11:30 am on November 21st, the first day of consecutive holidays

Even though it is reported every day that “the number of infected people in Japan is 2500! Most updated!”, many people are actually acting like this…

(Movement by car may be a countermeasure against infectious diseases, but …)

For me, who always puts together “summary articles” in this way…, I really want PEOPLE WHO are trying hard to control infectious diseases by refraining from doing so, to have fun than those who are spreading the infection…

By the way, there is also such an article about this ↓

Daily Shincho, well, it looks like a column in a weekly magazine, but in this sentence,

“If I thought that I would be discriminated against about COVID-19 by regional people when I moved from Tokyo to Saga, it was okay at all.

→Isn’t the Go To campaign a good campaign to create an atmosphere that is not afraid of tourists in vain? “

It’s written in a story style!

As a result, the title of the article is “Atmosphere that is not overly afraid”, but

rather, I think that

“People have crossed the line where they have to be afraid of COVID-19, and they travel without being afraid, creating a paralyzed atmosphere …”

I feel that the government was overdoing “Go To ~”, and has created an atmosphere of “Oh, isn’t COVID-19 all right?” …

By the way, in such a domestic “unstoppable situation”,

but the review of “Go To” was finally announced yesterday!

Most of today’s news related to the new coronavirus (COVID-19) was related to this, so I would like to summarize it for a moment!

The day before yesterday, after being analyzed by the government’s subcommittee on measures against the new coronavirus (COVID-19), it was decided that “Go To~” will finally be reviewed in the evening of November 21st yesterday.

・Take stronger measures in cooperation with the prefectural governors.

・Request the following from each prefecture.

・ ｒegarding the “Go To (Travel) Campaign,”  suspension of new reservations for trips to destinations in infected areas

・Suspension of new issuance of meal tickets for “Go To Eat”

・ If each prefecture requests restaurants to shorten their business hours, the government will support 50 billion yen.

・If a positive person appears in a medical facility or a long-term care facility, a group test will be conducted at the expense of the Japanese government.

・ Specific measures such as the timing and period of presentation of the “Go To (Travel) Campaign” and restrictions on the use of points for “Go To Eat” will be announced after the third consecutive holidays.

・Some executives in the administration said,

as like this, it is how he wants to say,

”The interruption is not because the campaign is the cause of the spread.”

・The government is considering reserved trips for the “Go To (Travel) Campaign”.

They plan to take measures to prevent cancellation fees.

In a concrete story related to that,

The concrete system design is now being made by the Japan Tourism Agency.

“No specific exclusion area has been decided”

And the reaction of Tokyo is …

“The “Go To (Travel) Campaign” has been decided to arrive and depart from Tokyo because the country decides on its own initiative. I want the country to make a firm decision this time as well. That’s the responsibility. “

(To me, she looked like to be in a little bad mood, saying, “Originally, the local government was supposed to decide, but the country decided on its own.”)

Oh, by the way, all the government announcements are “requests” because it is the law called the Special Measures Law for Coronavirus (COVID-19) Infectious Diseases, and “the actual decision is the governor of the prefecture”, so let you understand “only(←lol)” this! lol

Even so, when I looked at the reactions of the Japanese people, there were various opinions as follows.

“A useless administration that can’t say anything concrete”

For me, I feel that

“In the first place, about the spread of infection, I think that mitigation, campaigns, airport quarantine exemptions etc, all of these are the responsibility of the country, and the seeds that the government itself sown …”

I hope that when the infection subsides again,

■(Although it is a trial calculation), it has finally exceeded 20,000 people …

I’m sorry to talk about myself, but I have a lot of things I want to summarize, but there are too many news related to the new coronavirus (COVID-19) infectious disease recently to summarize! lol

“Then you should make another article!”

You might think so, but lately I haven’t had much time …

There are many things that I would like to discuss in detail, such as vaccines and the status of “Go To ~” …

I will continue to do my best, so let’s share important things and information with everyone and let COVID-19 go to control firmly!

Thank you for always reading!