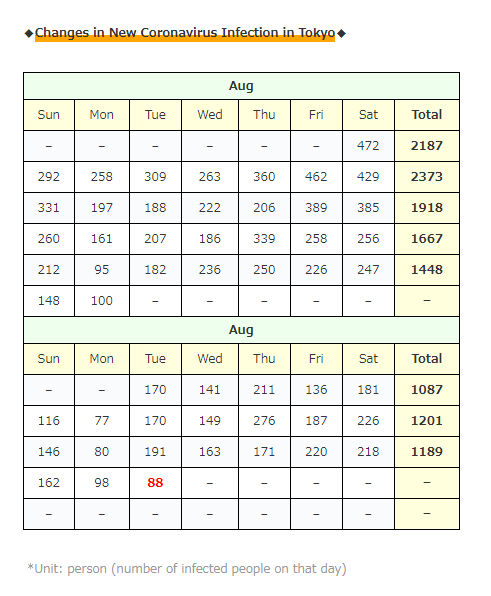 88 ( -10 from the day before) new infections confirmed in Tokyo.

The number of newly infected people in Tokyo cannot be compared because they are on consecutive holidays, but for the time being, I’m glad I didn’t exceed 100!

Out of [88] new infections in Tokyo

・In the dinner of 9 relatives, parents and 1 child who participated in the dinner were confirmed infection today, and the total number of infections at this dinner was 6.

→Men and Woman from The United States, France etc, [8] persons

↑As I wrote in ↑, the number of newly infected people in Tokyo today [88] is a number that can not be compared last week because it is on consecutive holidays…

It is expected that the reason why it cannot be compared is that Japanese medical institutions probably do not carry out many tests during consecutive holidays.

By the way, the “number of inspections conducted in Tokyo” for the past week or so looks like this! ↓

*The Tokyo Metropolitan Government believes that it takes an average of three days from test to being counted as an infected person.

Well, the number of tests on Saturday is still less than usual, and it seems that there is a possibility that “the report itself will not come up” because the medical institution is closed …

It was a report of “Recent number of tests”!

Well, today is the last day of consecutive holidays!

The amount of people in each downtown area on the 21st yesterday is also shown in the data!

(* Flow of people based on NTT DoCoMo’s base station information)

Looking at this data, we can see the following.

・The number of people in central Tokyo, Aichi, Osaka, and Fukuoka is still small.

・But everywhere ↑ About 80% of people are returning to the center…

・It seems that there are still few airports, but on the contrary, about 80% has recovered.

Well, it feels good economically! … But it feel a little scared for the persons who are self-restraint people like me…

And the topic has changed here!

It seems that the Ministry of Land, Infrastructure, Transport and Tourism will subsidize and spread the system that bus companies provide congestion status through smartphones!

Currently, some companies such as JR East are trying to popularize this system by using that “the congestion situation in the car is grasped with sensors and cameras and provided in real time”.

I really wanted this!

There are many people who think so! ??

They said “We are also considering adding railway companies to the target in the future. “ 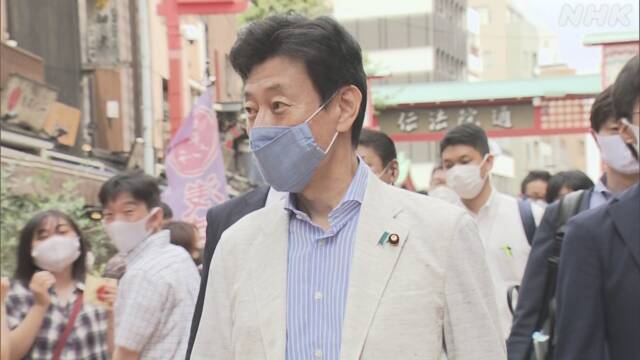 (*This picture was from Chinatown)

The Minister for Economic Revitalization Nishimura seems to have gone out to look forward to Yokohama Chinatown!

Minister Nishimura said that he would like to start the “Go To Event” from the middle of next month to support the event industry.

Rather, I would like the government to give out the necessary amount of subsidy for a month or two with that amount of money for the event vendors so that we can fully enjoy it after it has controlled with  COVID-19 properly …

By the way, in the same article, “Go To Shopping Street” seems to be considering starting from the middle of next month.

Rather, I want you to do “Go To Shopping Street” from tomorrow!

Congestion risk due to congestion on holidays! If you don’t, you’ll just stop by more on your way home from work!

Few people are discharged from the hospital today, and the number has increased by less than 100 for the first time in a while…

Today is the last day of consecutive holidays and it looks like a U-turn rush.

The reservation rate for ANA’s afternoon flights is 97% (?!).