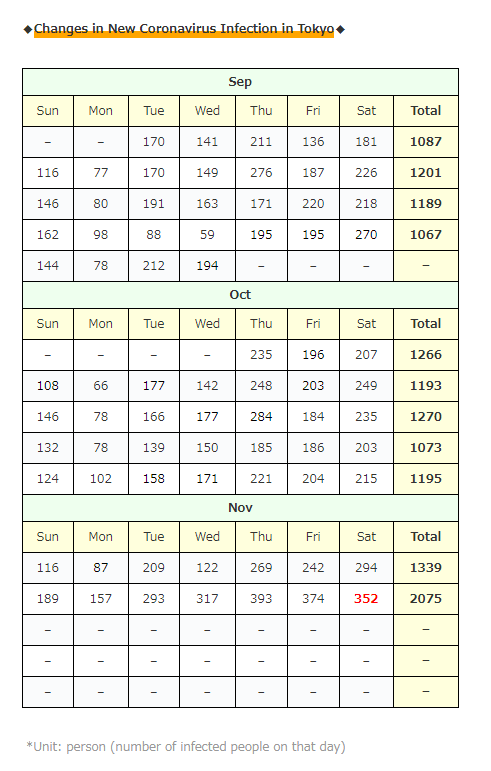 It seems that the number of newly infected people in Tokyo peaked on Thursday this week.

When I saw 393 people on Thursday, I thought it was… 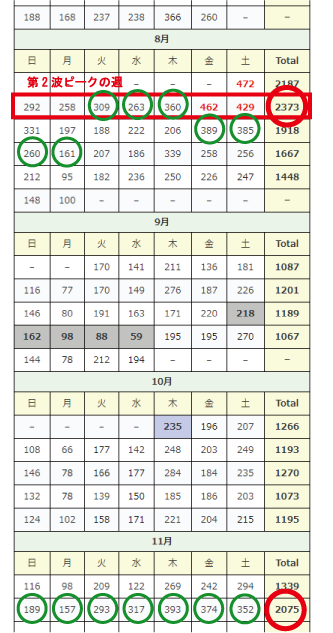 * But this week, the numbers around the second wave peak continued.

*Information on outbreaks could not be confirmed today, such as in the home [78] people / office[17] people / dinner[9] people / facility [23] people

→ It seems that Tokyo is in a situation where the infection is spreading widely. ..

*Cumulative (at least) 25 or more people

* Most of the infected people are in the northwestern part of the prefecture near Tokyo. ..

・Outbreak of an elderly facility in Okazaki City [5] person(s)

・ Outbreak of “Dream House”, a special nursing home for the elderly in Sapporo City [5] person(s)

* It seems that an outbreak occurred at a restaurant in Tsuchiura City that was accompanied by night entertainment.

* Others At this time (23:30), it seems that more than 10 people have been confirmed to be infected in the following 9 areas … 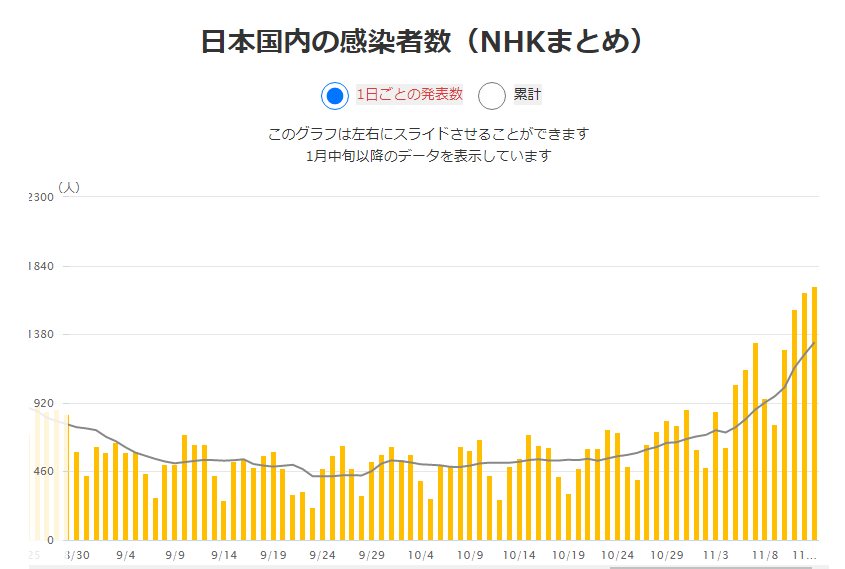 There was an article with a slightly surprising title today, so I will introduce it first!

“There are a series of reports that it may cause serious brain damage.”

The article that says, “It’s worried about brain damage and sequelae,” but it’s scary to hear this …

Will the new coronavirus (COVID-19) finally ruin the brain, unlike previous illnesses?

It’s a way of writing an article that makes us think so, but this is too misleading in the Asahi Shimbun …

As some of you may know, the same coronavirus “influenza” sometimes causes abnormalities in the brain, causing vomiting, convulsions, impaired consciousness, and abnormal behavior.

Although it actually affects the brain, I thought that it was not good to write something like “a new symptom that only the new coronavirus (COVID-19) has”.

I also wonder, “But it would be nice if everyone could take proper measures against infectious diseases …”.

And the next topic!

Domestic infection seems to be spreading in various places …

The Ministry of Land, Infrastructure, Transport and Tourism, which has jurisdiction over the “Go To (Travel) Campaign,” has confirmed that 3 employees of the same automobile bureau have been infected, and 10 people are waiting at home …

It may be an unfortunate coincidence, but I don’t know if it’s a crisis management issue, a way of thinking about life or infectious disease control, or a job that goes to a risky place in the first place, but what’s happening?

And there was an article like this about “Go To (Travel) Campaign”.

According to the article, the Suga administration is in a dilemma that “he want to prevent the spread of infection, but he can’t stop it because of the suspension of the campaign, the turmoil in the state of emergency, and the impact on the economy.”

It seems that the government has decided,

“Maybe the infection will stop by stage 3, so everything will go through until stage 3! No countermeasures will be taken!”

it is used by more than 50 million people, and the amount of points awarded will be more than 40 billion yen.

The budget is likely to reach 61.6 billion yen in the near future, so new reservations will not be possible!

As the infection continues to spread, I thought after seeing the article,

“I hope the government does not extend the captain …”.

Meanwhile, Minister of Economy Nishimura, who is a leader in measures against new coronavirus (COVID-19) infectious diseases in Japan,

How many times have you heard this word …

Even during the “second wave”, the infection continued to spread, but no measures were taken and only the following remarks were made.

Minister Nishimura “I have a strong sense of crisis”

Governor Koike “I have a strong sense of crisis”

As far as I can see, it is sad news for those who read this and I am doing my best to prevent infection with the new coronavirus (COVID-19), but (same as in the second wave) no measures are taken…

It’s about 10% of the Secret Service guards …

The article says, “It doesn’t seem like it was just the protection of President Trump,” but the job of guarding certainly seems to have a high risk of infection …

President Trump said that the new coronavirus (COVID-19) vaccine being developed by Pfizer Inc. of the United States…

…”will be approved for emergency use of the Pfizer vaccine in the very near future”!

“Emergency use approval” means making it available before formal approval!

There are also strict standards such as safety and efficacy, and if “emergency use approval” is given, it will be possible for medical professionals etc., so it is quite big step for solving the new coronavirus (COVID-19) infection.

In the next half month, “December, when British and American vaccines may be officially approved”, finally, the end of this “new coronavirus (COVID-19) infectious disease” has come to an end!

And about the vaccination,

it is said that the House of Representatives Welfare and Labor Committee will “inoculate at the will of the applicant after thoroughly disseminating both preventive effects and side effects”!

It seems that it was said that “people who have not been vaccinated should not be subject to pressure or discrimination”, but I want everyone to be vaccinated as much as possible for the sake of health and society!

I would rather say, “I don’t have to ask about risks, so let me inoculate as soon as possible!” lol

■The number is increasing by more than 500 every day …

Although it was such a domestic infection situation,

it seems that many tourists are visiting today in Hokkaido, where the spread of infection is at the level of Osaka and Tokyo, on November 14th.

It’s really strange to see this kind of thing, but it was the same with “2nd wave”, but in this situation,

①”People who are a little inclined to prevent infection”

②A person who says, “I don’t get infected!” or “I don’t mind getting infected!”

I wonder which one is more …?

In a good way, Japanese people who are not very sensitive to various things are a national character that I really love, but at times like this … I want you to have a little more sense of ownership …