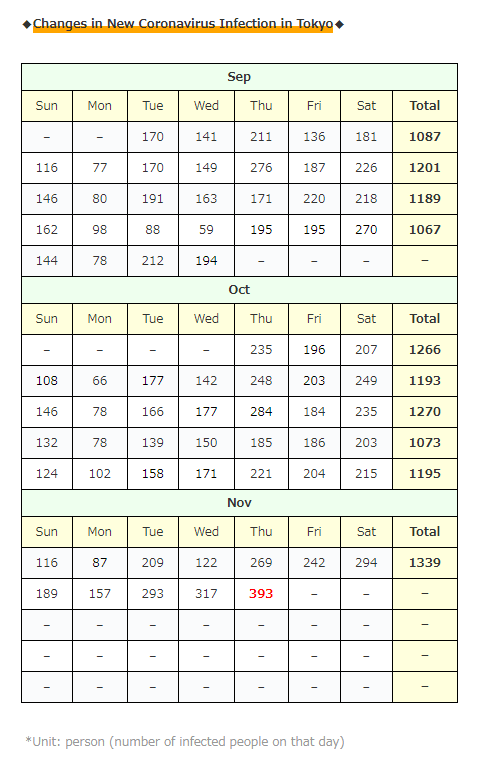 [Nationwide] The highest number of daily records (1605 people) was set, and [1661 people] were infected.

What is the interlocking feeling of this infection explosion? ??

* In addition, ↓ shows when the number of recently infected people in Tokyo has been … 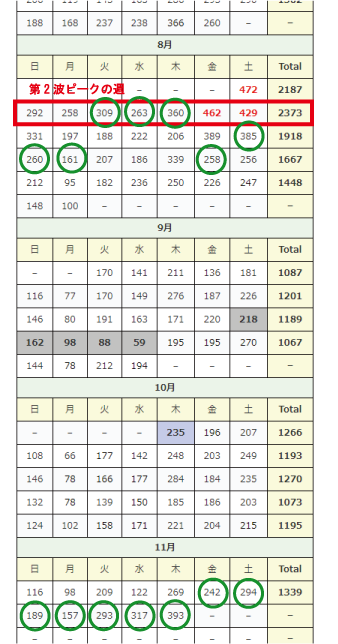 ”The number of asymptomatic infected people exceeds 100, which is the highest ever, but it’s the result of aggressive test”

”There are 22 people who did not live in Tokyo and did not come, but only the specimens were brought into Tokyo and became positive.”

”(From the above) there are actually less than 300 people”

”I understand that you’re a little worried because the number of infected people is increasing, but I think there are many opportunities to get together for the year-end and New Year holidays, but please act consciously so as not to infect the elderly.”

This person has no intention of taking measures………

・Infection at the office in Funabashi City [2] person(s)

・No detailed information was found today …

* At the New Coronavirus (COVID-19) Infection Control Conference in Osaka Prefecture, it seems that in Osaka, not only “restaurants with entertainment at night” but also infections in the following cases are common.

・Meeting while having a meal with a colleague

・BBQ and hot pot party with a large number of people

・Outbreak of “Dream House”, a special nursing home for the elderly in Sapporo City [1] person(s)

・Outbreak of karaoke snacks in the Iburi region [2] person(s)

・Outbreak of “Care Home Minamiawaji”, a health facility for the elderly in Minamiawaji City [4] person(s)

* Others At this time (20:30), it seems that more than 10 people have been confirmed to be infected in the following 6 areas … 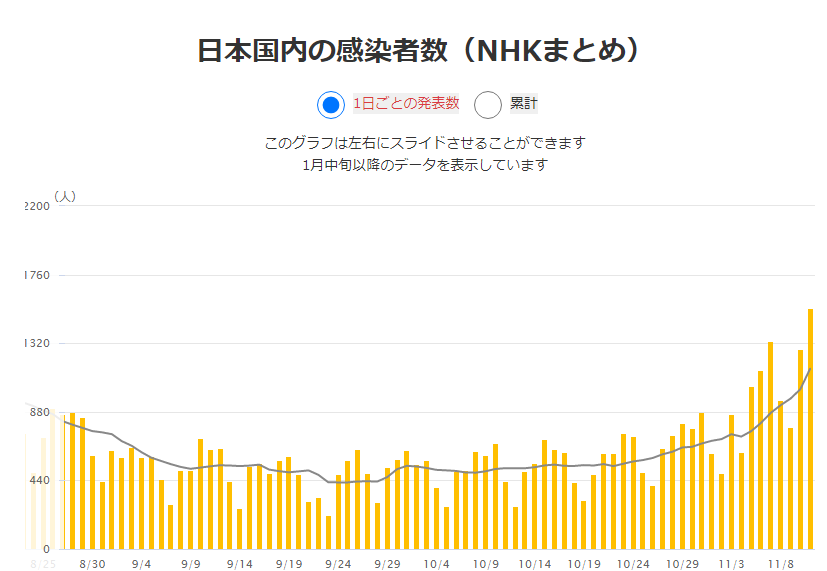 It’s a difficult situation every day …!

Moreover, I never thought that the infection would spread at such a fast pace …

By the way, this new coronavirus infection (COVID-19) is often compared with “Spanish flu”, but there were also Spanish flu from the first wave to the third wave …

・Infectious diseases (influenza) that prevailed from 1918 to 1920

but the “Spanish flu” spread during World War I.

・In Japan at that time, all shops and schools were closed

・Unlike the new coronavirus (COVID-19), the mortality rate was higher in young people.

・They gave a large-scale vaccination that was thought to work at the time, but it was completely ineffective in terms of modern medicine.

(In the first place, it was a virus that could not be seen at the medical level at that time.)

・In the end, this “Spanish flu” could not be solved at the medical level at that time, because there were too many infected people, they were able to acquire herd immunity and ended naturally.

(I think many people know it, but)

There are too many things in common …

According to Mr. Nakagawa, Chairman of the Japan Medical Association, the current domestic infection status of the new coronavirus (COVID-19) infection is…

“think of it as the third wave.”

I can’t say anything because the situation is different between the time of “Spanish flu” and now, but I didn’t want it to be similar until the “third wave” occurred ….

However, what is different from that time is that “vaccine” is likely to be made!

we can really hope for it!

By the way, regarding vaccines in the UK,

in the questionnaire about vaccination

・Those who answered that they would not receive the vaccine: 22%

・ People who answered that they would be vaccinated

In the UK, individuals are free to choose whether or not to receive the new coronavirus (COVID-19) vaccine.

Regarding the situation of such a new coronavirus infection (COVID-19), the governors of each prefecture, expert teachers, politicians, etc. all commented that “the third wave is coming”!

On the other hand, they don’t take any measures …

Summarizing this “summary article”, more than half of the outbreaks are not only in Hokkaido, but in most areas, there are many elderly people such as “elderly housing with care”, “nursing care service” and “nosocomial infection” …

Governor Koike often says, “Young people should not pass on to the elderly.”

But in reality, the infection of the elderly is spreading in these places …

And “Go To~” is one of the reasons why the infection is spreading now, but

It is said that 15 employees of 11 restaurants participating in the “Go To Eat” business are infected with the new coronavirus (COVID-19).

It’s too few, so I think “Is it really …?”, But since it’s “employee”, it’s a good thing if it’s the result of a thorough investigation (because it seems to be able to be investigated properly)!

Also in Okinawa, it was said that “some economic recovery movements have been seen” since the addition of departures and arrivals in Tokyo on October 1st in the “Go To (Travel) Campaign”.

(*In Japan, it is said that the most dangerous place of infection is Tokyo…)

By the way, it’s about time of thinking to start the year-end and New Year holidays, so there was an article like this!

When we think about the new coronavirus (COVID-19), we hesitate to go home during the New Year holidays …

In the article, some “infection prevention measures (let’s mask! Etc.) leaflets” issued by the government and local governments were introduced, but in summary, “The government want you to do this if you go home”!

・Put your coat at the front door (to prevent viruses from being brought into your house)!

・Be careful of “ventilation” and “drying”, and a humidifier is also important!

・Apart from meals and conversations!

→Eat quietly, after mask and talk !

・People who have many opportunities to go out are the last to take a bath!

→Because there may be a virus attached!

・Please keep a record of your actions!

It seems to be difficult in some areas (lol),

but you’ll want to meet your family, so It’s hard to say “refrain from doing this!”…

■Until just a week or two ago, it was double-digit or decreased, but it is likely to increase by more than 1000 people. .. ..

I was wondering if I was being pinpointed (lol),

but it seems that there is a continuing movement to refrain from seeing medical institutions, and they said, “Don’t be too afraid of the new coronavirus （COVID－19）!” It seems that the Tokyo Medical Association called for it.

Because I’m worried about getting infected! lol

Isn’t there really a good way to do this? … Even if it’s a complete reservation system, it’s likely that the waiting period will be too long and it will be a week later …

By the way, regarding the vaccine,

in the United States, not only Pfizer but also the new coronavirus (COVID-19) vaccine being developed by Moderna seems to reach 54 infected people necessary for analysis out of about 30,000 clinical trial participants. And it seems that the progress will be analyzed!

I hope vaccination will start early in Japan, but first of all, we have to manage to survive this “third wave”!