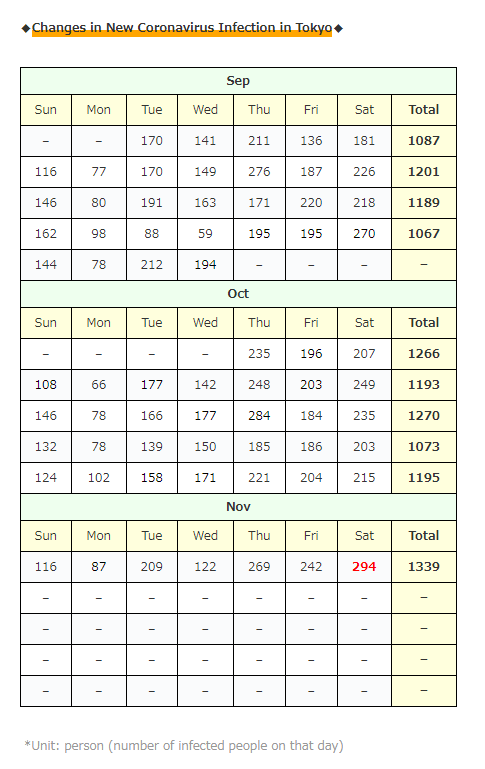 The number of newly infected people in Tokyo had been flat until last week, but this week is like that it was pushed to the bottom of despair at once …

・Infection in the facility [25] people

Actually, as mentioned above,
[Infection at home [34] people]
[Infection at office [16] people]
[『the entertainment district at night』 [14] people],
so it seems that a large-scale outbreak has not occurred …

* The person in charge of the city said, “It’s not as rapid as in other areas, but it’s increasing from last week and we should be cautious.”

The number of people infected in “Quarantine at the airport” is … I think it’s too much. .. ..

I’ve never seen such a number …

*Three friends who ate and drank together

*There is a risk of tertiary infection…

* Since these were the only outbreak information, maybe a considerable number of people were “infection route unknown” …

*These are the “entertainment district at night”

*There are staff working at both facilities

* Others At this time (21:25), it seems that more than 10 people have been confirmed to be infected in the following 5 areas …

I usually introduce the events that happened today and try not to make it a negative topic, but today I will summarize it a little seriously (as politely as possible!)!

The situation in Japan has become difficult …

Until now (although the number of infected people nationwide has clearly increased),

the number of infected people has increased even in “Tokyo”, which was flat like mystery until last week …

Today is Saturday, so I calculated the weekly total of “COVID-19 Trend Calendar in Tokyo”, but the result is “1339 people”, returning to the number around the peak of “2nd wave” in August… 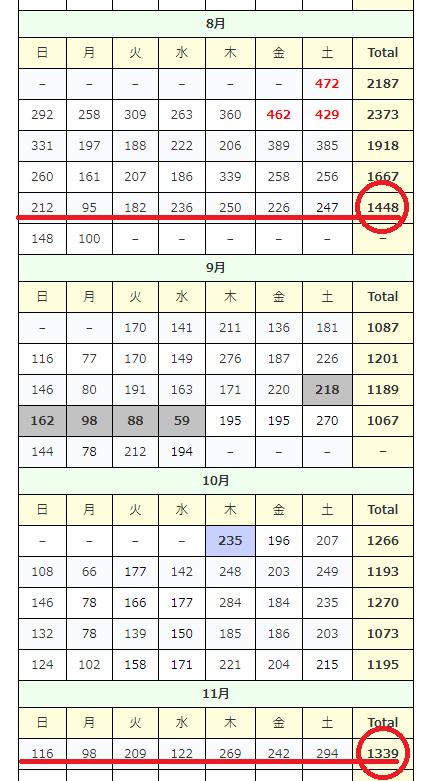 (I’m sorry to give an example) If outbreaks occur on a daily basis like Kanagawa,

the “number of infected people including outbreaks” = “daily numbers”…

Currently, this is the case in Hokkaido, but (same as the outbreak of “2nd wave” in Tokyo), the infection spread from outbreaks in downtown areas at night, and finally more than half of the people became “unknown route of infection”…

(I’m sorry to pull out this article every day)

*Sorry I posted only for japanese, but this article say “The government has stated that the number of infected people is less than 3,000.”

As proof of that, I introduced the comment of Governor Koike in this “Summary Article” yesterday like follows,

(From the summary of yesterday November 6th)

・Governor Koike said, “The most important thing is the number of seriously ill people.”

And she also said, “It has been reported that elderly people (prone to severe illness) are infected from people who live together at home, and it is important not to bring the virus home or bring it in so that the elderly will not be seriously ill.” ..

The point is, “At home, infected people naturally infect their families, so don’t get infected in the first place” …

How many people have noticed the true meaning of this?

Maybe she says, “It doesn’t matter if there are hundreds of new infections.”

(* To be exact, it doesn’t matter if there are hundreds of newly infected people as long as the number of seriously ill or dead people does not increase.)

Certainly, like flu, it is correct to say, “If it’s a normal illness that does not increase the number of seriously ill or dead people so much, it’s no problem to infect as many people as you like.”

However, with regard to this new coronavirus (COVID-19), it remains a scary disease with no solution yet, “we don’t even have a vaccine yet, and I don’t know how dramatically the existing treatments are effective.”

In that way (there is no problem even if the number of infected people increases), “the governments who take measures” are thinking, so no concrete measures can be taken,

and conversely, we don’t know the idea behind the government , the public is scared by the number of infected people announced daily,

and as a result, more and more people are in trouble because the economy is not working well, and schools are no longer a safe place (infectiously)…

The government is crazy …

the number of infected people cannot be increased any more.

What to do now…

However, when thinking so, the solution is that each person has to be careful as long as the government does nothing …

I think that all the people who have read my “Summary Article” are “continuing to be interested in the new coronavirus (COVID-19) and paying attention to it”, so today’s content may be like that for you “What are you talking about for granted? We already know that!”,

but I have no choice but to increase the number of people who “want to seriously resolve the infection” as much as possible, so I will do my best every day to increase people with such mind about new coronavirus (COVID-19)! And I will continue to introduce all the related articles together!

I think it’s such a messy and boring content today (lol), but I’m doing my best every day like this, so let’s continue to do what everyone can do!

From tomorrow, I will continue to introduce the usual news with some funny news! lol

… As a result, I’ve blown away all the articles I was planning to introduce today! Lol

I usually try not to put in so much personal feelings …

If everyone don’t have a sense of crisis here, the infection will really spread…

By the way, the article I was trying to introduce today is below!

In Sapporo, the government seems to think that “shortening business hours” of “restaurants  with entertainment at night” will do the trick!

Is President Trump’s aide infected? Did the White House not control infection?!!

Domestic bats also had a virus similar to the coronavirus! ← No, everyone knows that…

“I wonder if there is a mask that can be used for a lifetime …” … Oh, how about this?

I was trying to tell you the above!

Everyone, this is really a turning point!

Let’s put up with a little bit and suppress the new coronavirus (COVID-19) so as not to spread it seriously!