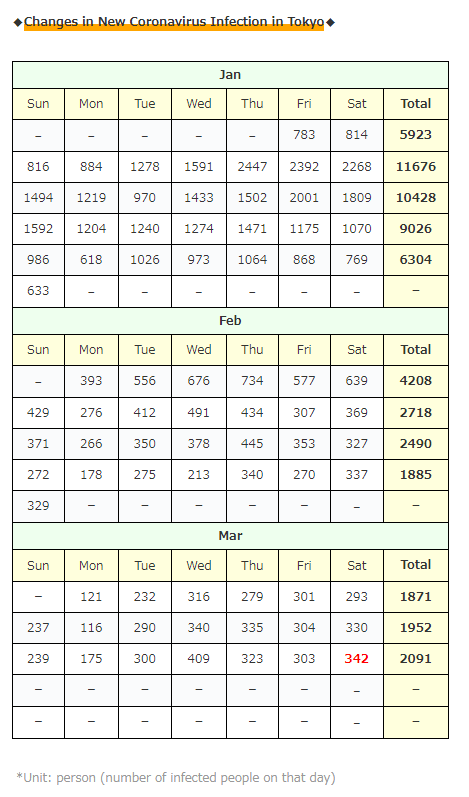 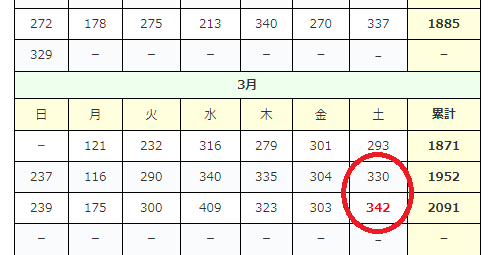 This week, all days except Thursday and Friday increased from the previous week …

Also, even if you look at the total for one week 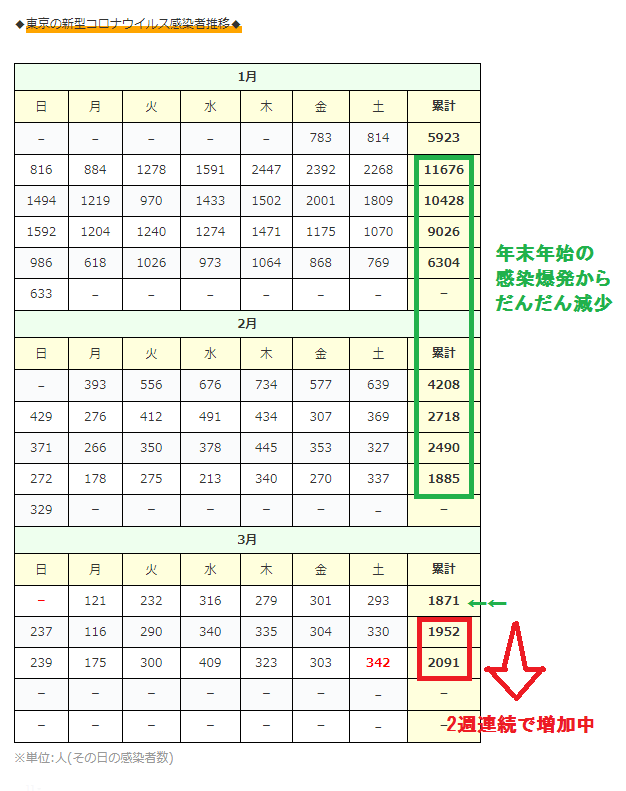 Tomorrow is the 21st of the cancellation of the state of emergency, but it’s a little too scary … 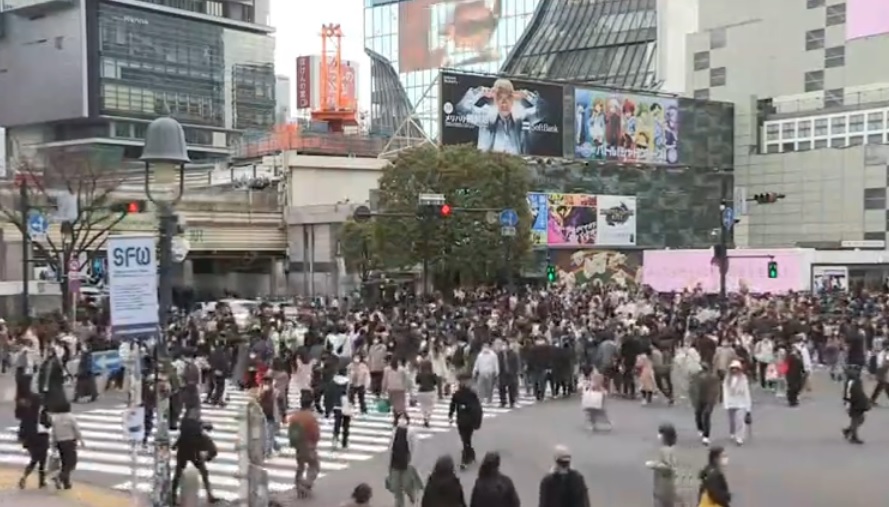 ・Infection in the facility [-] people

* The details of the infection in Tokyo have not been announced as of 3:00 am, probably because of the earthquake with a seismic intensity of 5 in Tohoku, so it seems that today’s version will not be announced …

・It seems that [2] people have died in Tokyo today … 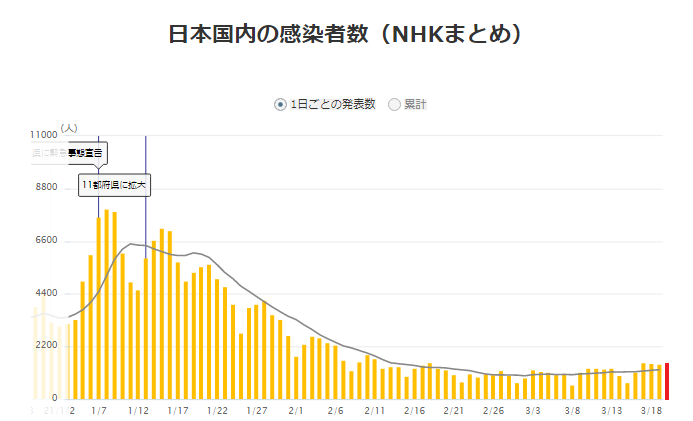 Period:  March 20-4 weeks
Region:  Paris and northern regions
Reason:  Due to the spread of infection by mutant species
(Approximately 40,000 infected people per day)
(73% of infected people are mutants)

Contents:  ①Moveable only within 10km from home
* No going out after 7 pm
* Documents stating the reason are required when going out
②Only daily necessities / book stores can be opened

By the way, the current infection situation in France is ↓ 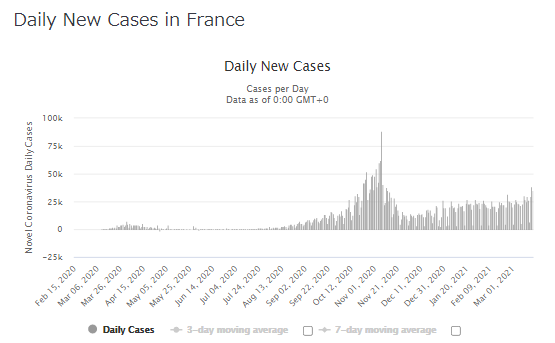 With that kind of feeling, regulations are being imposed again overseas,
but about in Japan … 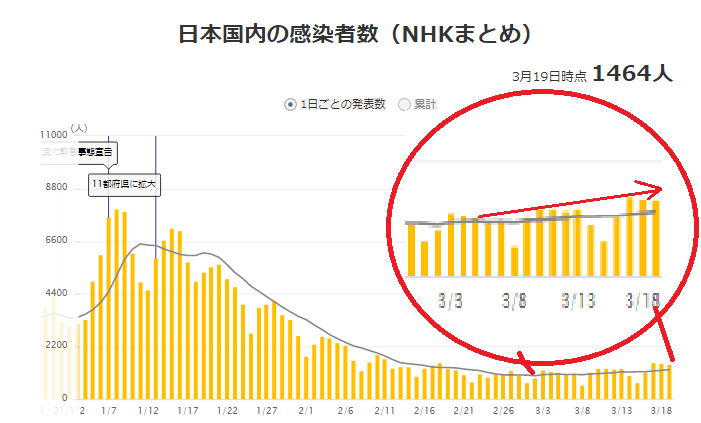 (The daily number of infected people in Japan)

↑ With this kind of feeling, the number of infected people in Japan is increasing a little, and in Hyogo etc., the proportion of mutants seems to be 50% or more (about 55%) as in overseas,

but as the temperature gets warmer, the number of people in the city is steadily increasing like follows…↓ 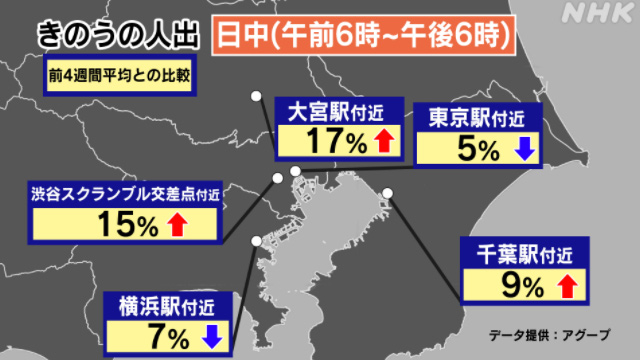 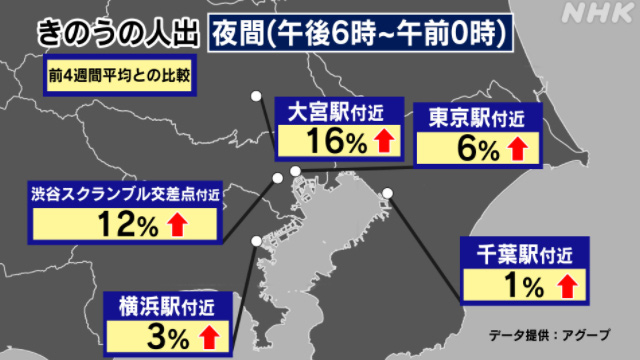 ↑ In this way, March 18th (Thursday) is a weekday, but the flow of people is increasing day by day in various places …!

no matter how much each governor says, “I call for self-restraint because the infection situation is not good!”, it’s meaningless …

Because, like Tokyo Disneyland, corporate activities become more active when the state of emergency is lifted.

Well, I think that the government and the governors have known that the “call” is meaningless in the past year, so it’s just “showing the attitude of taking measures” …

“The area around people’s mouths is rough with masks and dermatologists are thriving. Do I still have to wear masks?”

With that feeling, it seems that Japan is entering a “careless mode” rather than a “relaxation mood” …!

It seems that the infection is likely to spread, but

if not as much as during the New Year holidays …! (cry)

Just because there were a lot of negative articles, ↑ became a summary full of negatives … lol

The Ministry of Health, Labor and Welfare seems to have purchased 2 million people (13.9 billion yen) of Avigan for stockpiling!

(*Avigan … a therapeutic drug for the new coronavirus (COVID-19))

In addition, the AstraZeneca vaccine was once suspended in each country due to cases of thrombosis in Europe, but

EU health authorities said that “it cannot be completely proved that vaccination is unrelated to the rare case of thrombosis.” , but they concluded that it is a “safe and effective vaccine”, and vaccination will be resumed in each country!

It’s safe for the time being!

And it seems that the production of this AstraZeneca vaccine has

It seems that more than 90 million of the 120 million contracts will be produced in Japan, so I’m glad if vaccination accelerates explosively with this! !!