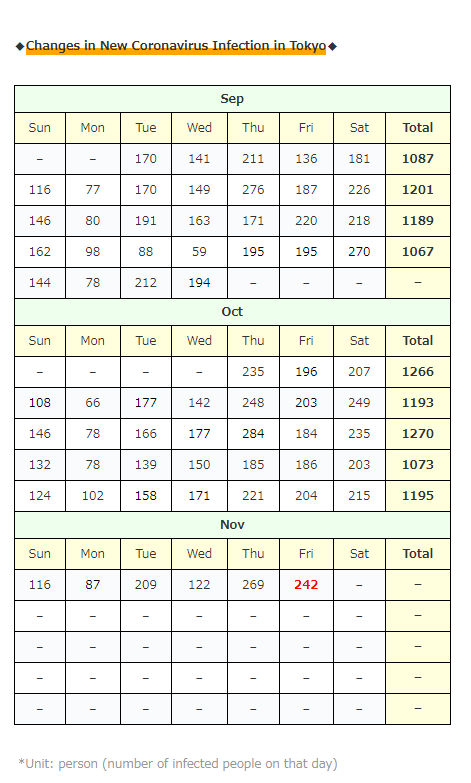 The number of new infections in Tokyo (242) was lower than yesterday (269), but on Friday it was a large number that would not come out until around the peak in August…

・Governor Koike said, “The most important thing is the number of seriously ill people.”

And she also said, “It has been reported that elderly people (prone to severe illness) are infected from people who live together at home, and it is important not to bring the virus home or bring it in so that the elderly will not be seriously ill.” ..

The point is, “At home, infected people naturally infect their families, so don’t get infected in the first place” …

→Men from The United States, The Philippine, The UK, Indonesia etc. [8] person(s)

*Three friends who ate and drank together

・Outbreak of restaurants in the Iburi region [1] person(s)

*At the Atsubetsu Post Office in Sapporo City, it seems that some staff members have been infected and all the counters including ATMs are closed … (The schedule for reopening has not been decided …)

・Outbreak of “Care Home Minamiawaji”, a health facility for the elderly in Minamiawaji City [6] person(s)

*One person was confirmed to be infected on November 3,

but it seems to be a different case.

* 600 people were watching the play, but it was not rich contacts due to measures such as distance and mask.

* Others At this time (20:20), it seems that more than 10 people have been confirmed to be infected in the following 6 areas …

Looking at the news on TV and the Internet in Japan today, I found that almost the articles were about the US presidential election, and the articles related to the new coronavirus (COVID-19) seemed to be pushed to the corner.

“The presidential election is important for Japan, so it can’t be helped, but I want them to have a sense of crisis about the new coronavirus (COVID-19). The number of infected people is increasing.”

However, there were some important topics in it, so I would like to introduce them!

… And before that, today’s topic…

Sweden’s environmental activist Ms. Greta says to President Trump who does not stop tweet of impatience in the presidential election ↓ 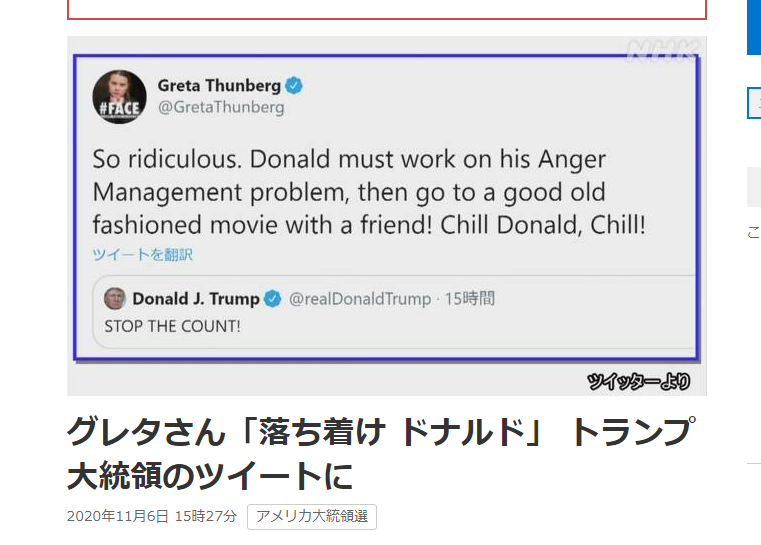 It seems that President Trump tweeted the same content to Ms. Greta in the past,

(*In Japan, we often use this phrase.)

Let’s return to the topic of the new coronavirus (COVID-19)! Lol

In Japan, the number of infected people is increasing considerably, and I think it is a place where we are quite uncertain about what will happen in the future,

but about overseas where “the second wave has expanded” like in April and May, strong “lockdown (city blockade)” has been announced in each country.

Lockdowns have begun throughout Italy from November 6th today …

In Italy, where 35,000 new cases were reported yesterday, the following strict measures are being taken.

・The restaurant closes at 6 pm

・Strict restrictions in some areas

・Designated as the area with the highest degree of caution

・You cannot go out except for essential

・The restaurant is open for delivery and take-out

The livestock “Mink” is famous for its fur, but in the Nordic country of Denmark, not only was a new type of coronavirus (COVID－19) mutated from mink found, but it was also confirmed to infect humans …

Twelve people have been confirmed infected, and the slaughter of 17 million minks in Denmark began yesterday on November 5th …

In addition, mink was slaughtered in the Netherlands and Spain …

Europe is in a really scary situation …

In connection with this, the UK has announced that

it will remove Denmark from countries that are exempt from isolation for a certain period of time after entering the country.

By the way, in the UK, stricter measures against the new coronavirus (COVID-19) have started yesterday from November 5th, and they are as follows.

・In principle, sales at retail stores are prohibited.

・Only take-out and home delivery at restaurants 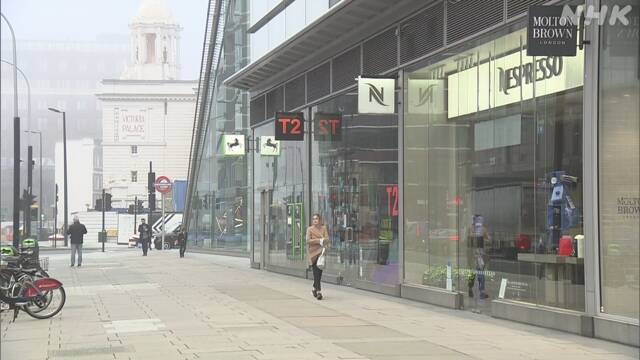 In such a difficult situation in Europe, How about Japan where is gradually spreading the infection …

Regarding to the number of new infections on November 5 exceeded 1,000 since the peak in August, Minister of Economic Affairs Nishimura, a leader in combating new coronavirus (COVID-19) infections in Japan, said as follows…

“Overall, it’s on a slight uptrend, but experts say,” it hasn’t increased significantly in Tokyo. ” “

“The number of reported cases of infected people must be viewed on a weekly basis. “

“We have to analyze the data on the day of onset, not the number announced. “

“So I have an expert analyze when the 1000 people reported yesterday are ill. “

Somehow, there is an atmosphere that says, “Because there was a holiday this week, and counts may have accumulated, so isn’t it reported at once?”

However, since last week there were 800 people for several days, and we can only see it as an apparently increasing trend, so I would like Japanese government to take proper measures.

Especially if they’re still serious about hosting the Olympics, I think it’s an important time or last chance to really spread the infection …

Hmmm frustrating and my head is about to explode! lol

It has increased so much that I have never seen it …

It’s about time to see the Christmas season!

It seems that “Santa Claus Post” will be set up in all Toys “R” Us stores to put “Letters to Santa Claus”! (lol)

It seems that it will be possible to send a letter from home to Santa, “home mailing”. 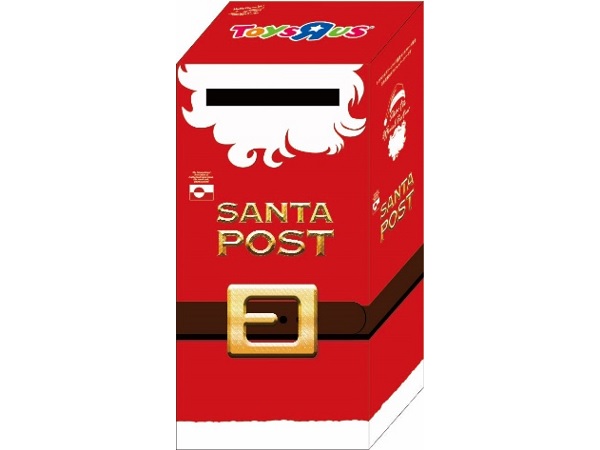 Can I write what you think?

I believe in Santa Claus! lol