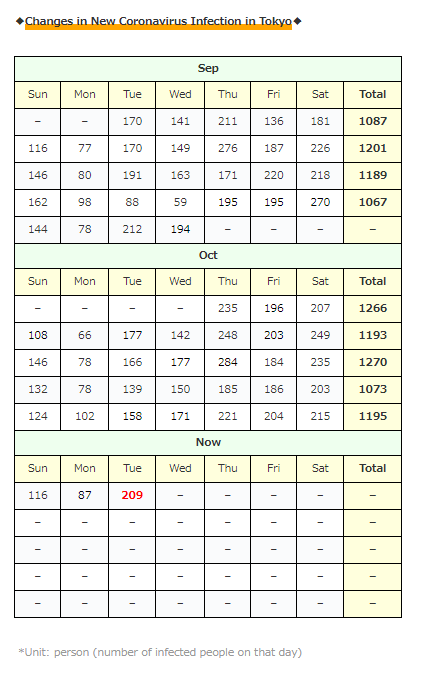 The number of newly infected people in Tokyo is over 200 even though it is Tuesday. .. ..

Not only in Japan but also in Tokyo, the number of newly infected people has become suspicious. .. 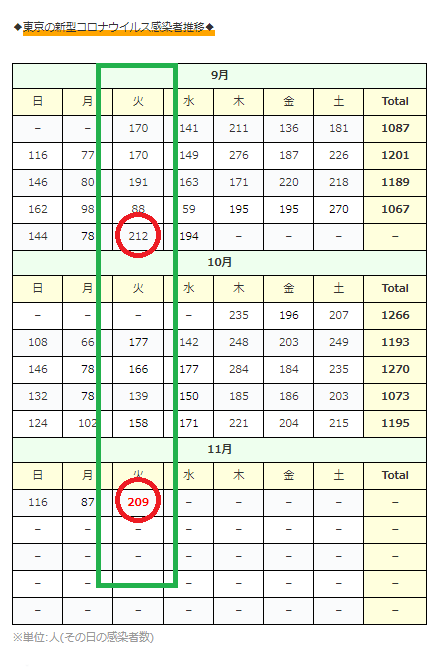 * The number of newly infected people in Tokyo on Tuesday exceeded 200 only once in the past two months. ..

・Infection in the facility [14] people

Even though it did not occur any big outbreaks, the number of newly infected people was 209 on Tuesday…? too scary………

* He complained of poor physical condition along the way and was found to be infected.

・Outbreak of “Care Home Minamiawaji”, a health facility for the elderly in Minamiawaji City [10] person(s)

Two female staff members, seat next to each other

The number of people infected each day has increased considerably in both Tokyo and the whole country.

Looking overseas, especially in Europe, as I mentioned the other day,

It seems that they have finally decided to lock down (city blockade) not only to France, Italy and Spain but also to the United Kingdom, Ireland and Germany.

Japan has made an “emergency declaration” like the one in April and May of this year. I don’t want you to do it again, but the current situation is increasing …

I don’t want Japan to make an “emergency declaration” like the one from April to May this year, but the current situation is increasing.

And yesterday, Governor Omura of Aichi Prefecture said, “I think that the third wave has actually arrived” in response to the increase in the number of newly infected people in the prefecture. ..

Certainly from the situation

In this way, it seems that the “infection spread campaign” led by the Japanese government is continuing.

By the way, here is the progress of the questionnaire on the Yahoo! website ↓ 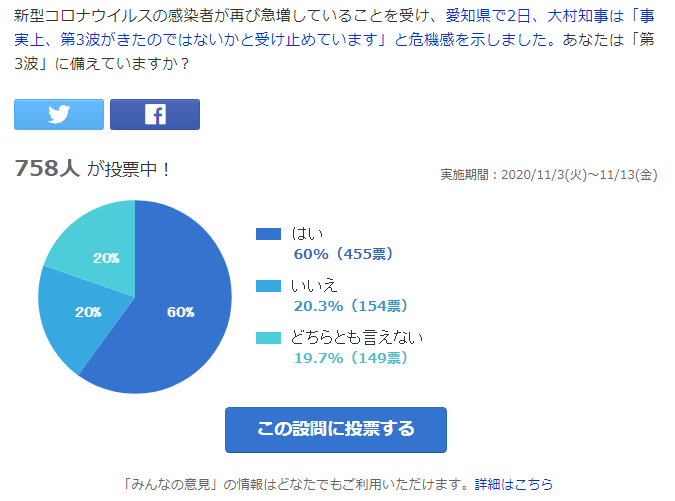 More than half of the respondents answered that they were “preparing for the third wave.”

However, those who participate in this questionnaire are “those who are conscious of infection prevention”,

and  those who say”COVID-19 has nothing to do with it!” are not participated in such a questionnaire in the first place, so it is difficult to judge …

In order to not be as such European lock-down, in the “we need to take action now“ situation,

The minister in charge of economic revitalization Nishimura, who plays a leading role in combating the new coronavirus (COVID-19) infectious disease, says …

“Since the infection is spreading in restaurants with entertainment even in local cities, we usually should have a relationship of trust with businesses. I will ask local governments to take measures such as building and making it easier to test. “

I know that under the current law, “it depend on the local government that actually takes measures against infectious diseases to citizens and prefectural citizens,” but that is not the case in this situation …

Now is the time for the JAPANESE GOVERNMENT to take leadership and ward off infectious diseases.

By the way, the article says, “Minister Nishimura explained that when there are signs of the spread of the infection, he has put together measures centered on quick and intensive PCR tests.” but

that means “test because you’re infected,”

but it’s not that, but we want to “prevent infection in the first place.”…

Even though he is the leader of countermeasures, the feeling is still strange…

It’s a day when we can only see the spread of infection today…!

Now, let’s change the topic when it becomes bittersweet! lol

You may have heard that stores are not profitable in “Go To Eat”, but according to this special article,

when using “Go To Eat”, if the customer unit price does not exceed 2300 yen, the shop will not make any profit after paying the customer transfer fee to the reservation site.

(* The average profit margin excluding labor costs and rent of restaurants is 8.6%)

(* Major reservation sites charge a customer transfer fee of 50 to 200 yen per visitor.)

This “Go To Eat” business itself seems to be a great success with 15.35 million people in 23 days from October 1, but as stated in the article, the major reservation site is really the most lucrative mechanism!

(*This campaign is a relief campaign for restaurants.)

It’s a government campaign, so the government should pay the fees for major reservation sites, or minimize the customer transfer fees …

but I want to work together to survive this “new coronavirus (COVID-19) infectious disease” !

Far from turning to a decrease, the range of increase is increasing day by day …

I’m spending my days trying too hard to prevent infections, going straight to work and going straight back (lol), but when I was thinking, “I really want to drink something after a long time” I found it!

“織香 -Worka-“, the third edition of “Coffee Beer”, which has been a collaboration beer project between Horiguchi Coffee and Coedo Brewery for several years, has been released! 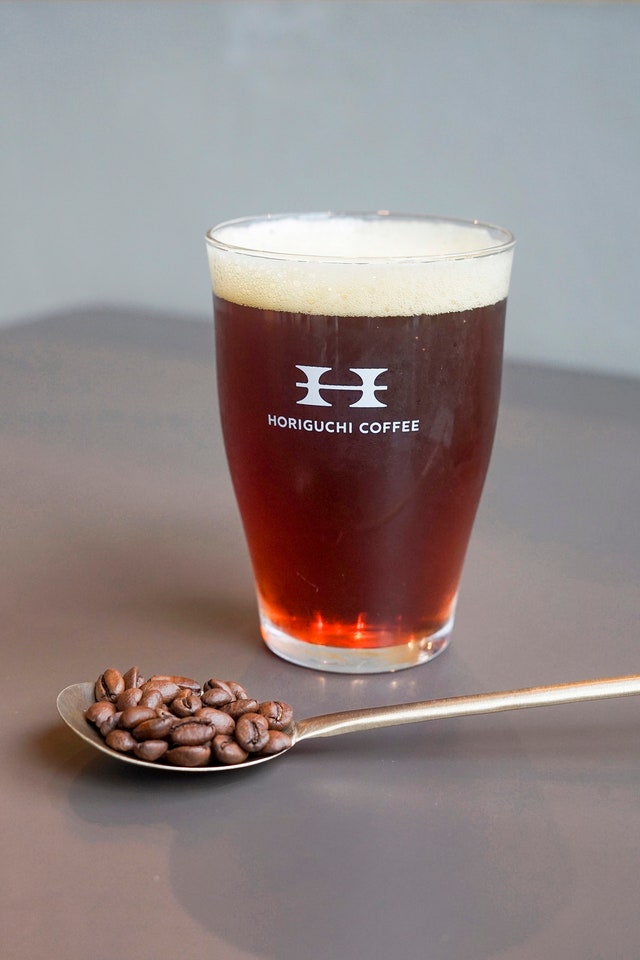 (I’m not good at beer) I love coffee so I really want to drink it! Lol 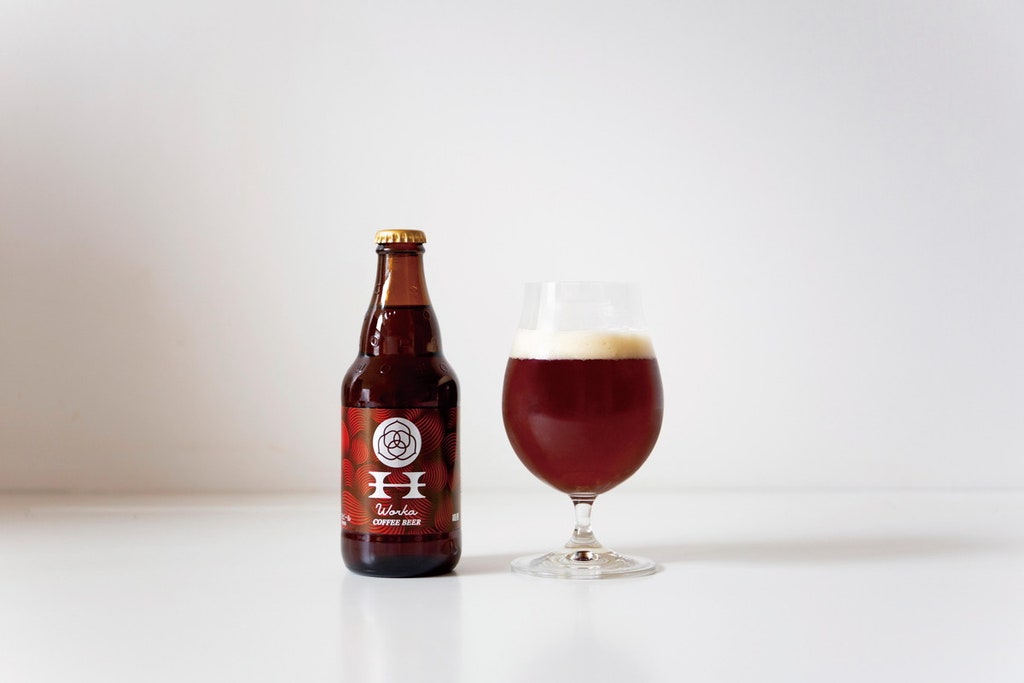 I think it’s difficult in various situations, such as paying attention to infection prevention every day, taking care of your own family, working hard in such a situation,

but sometimes drinking alcohol and rewarding yourself  (lol) , let’s all survive together!