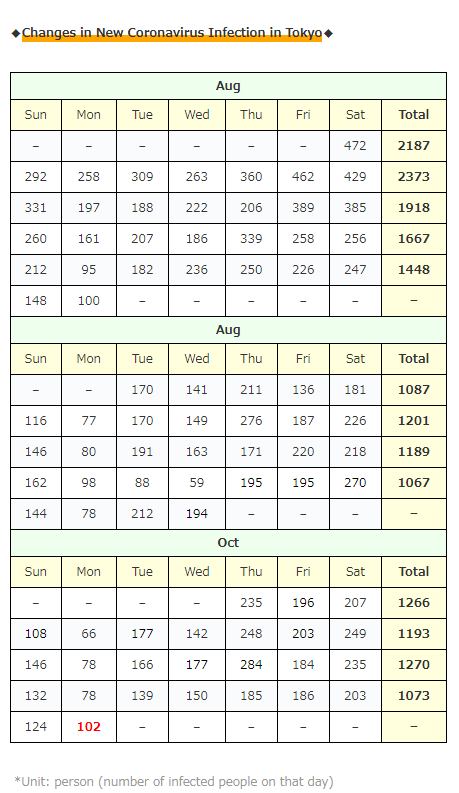 The number of newly infected people in Tokyo has been high for the second consecutive day this week.

What happened, even though there were quite a few last week? .. 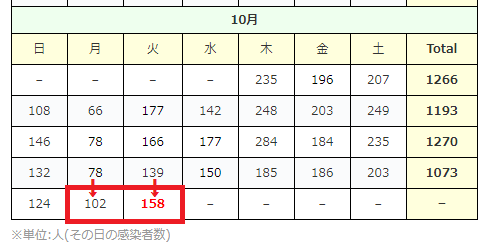 * The total number of infected people at the facility is 20

・Outbreak of “Leben Home Toda”, a special nursing home for the elderly in Toda City [2] person(s)

* Nosocomial infections also occurred from August to September. (This time in another ward)

* They had dinner with the party participants.

・Outbreak of restaurant outbreak with entertainment of Susukino [3] person(s)

■■■ Updated the number of newly infected people, the highest number ever ■■■

Suddenly, are there any people around you teleworking? ??

Unfortunately, it’s not around me. ..

According to a survey on the private internet,

Of the 1,100 respondents, 18% of the respondents do telework even one day a week.

Even the survey on the Internet (personal computer) is 18%, so it seems that it is actually less …

Even though companies haven’t done telework until last year,  the government suddenly asks them to do it this year, I feel that the companies that support it are more amazing. (lol)

And for a moment, it ’s an overseas topic,

Even at that UN headquarters, five cases of new coronavirus (COVID－19) infection were confirmed …

They have been working from home since March, but since July they have relaxed the number of people in the facility …

No matter where you go abroad, the new coronavirus (COVID－19) infection is rampant …

And in such a situation, it seems that such a thing was developed in Japan in preparation for the spread of the new coronavirus (COVID－19) infection in winter!

It seems that the “wooden medical booth” that was to be introduced at the Ashikaga Red Cross Hospital in Tochigi Prefecture was demonstrated! 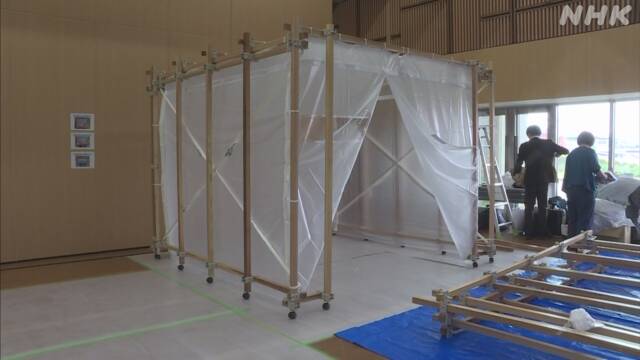 “Assuming that the patient cannot be accommodated in the hospital room,”

I don’t want it to be that kind of thing, but I feel that the infection is likely to spread to some extent in winter, so I’m grateful that you can take appropriate measures before winter!

The last is this topic.

As you all know, the government will bear all the costs of vaccination against the new corona virus (COVID-19) in Japan, but today at the Cabinet meeting on October 27, the “Vaccination Law” ( I didn’t know that there was such a law…), and the amendment was decided, and it seems that vaccination was positioned as a national “obligation to make efforts”!

The priority is for the elderly and healthcare professionals at risk of becoming severe.

What happens after that …

However, I don’t think it will return to normal life unless all the people (to be exact, the rate at which mass immunity can be achieved) are vaccinated, so well … the first thing to do is to get approval in Japan.

By the way, herd immunity means that

”If ○% of the people in the city have immunity, the infectious disease will be resolved.”

The point is that when three people are walking around the city and one of them is infected, if the other two are immune, the infection will not spread!

The future in which the government wastes time on approval seems subtle.

It has increased considerably …

it may be because there are large-scale clusters in various places .. .. 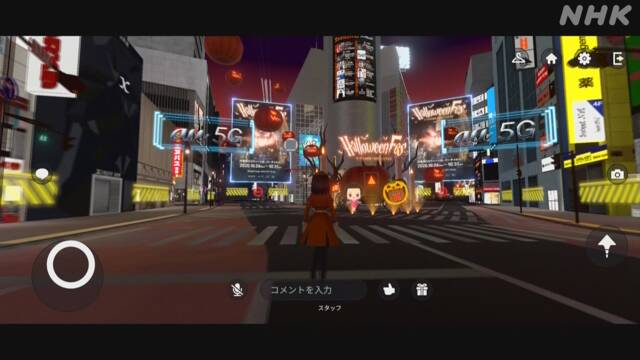 * In order to prevent the spread of the new coronavirus, Shibuya Ward is calling for refraining from making noise in Shibuya during Halloween this year, and instead they are trying to recreate the city of Shibuya with a smartphone app and have them enjoy it.

By the way, it seems to be a great success,

and it seems that the live schedule of popular artists has been postponed due to a system malfunction due to access concentration.

Even so, how satisfied are the people who were making noise in Shibuya on Halloween every year with this app?