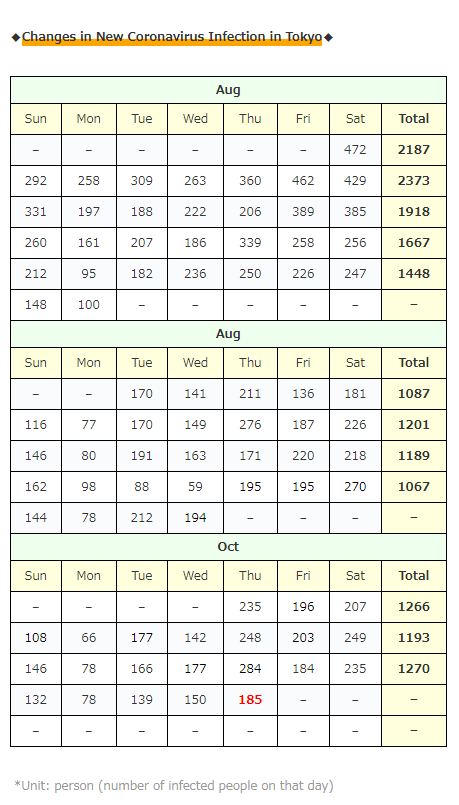 The number of new infections in Tokyo has been much lower this week than last week!

And on Thursday, less than 200 people is a pretty rare number! 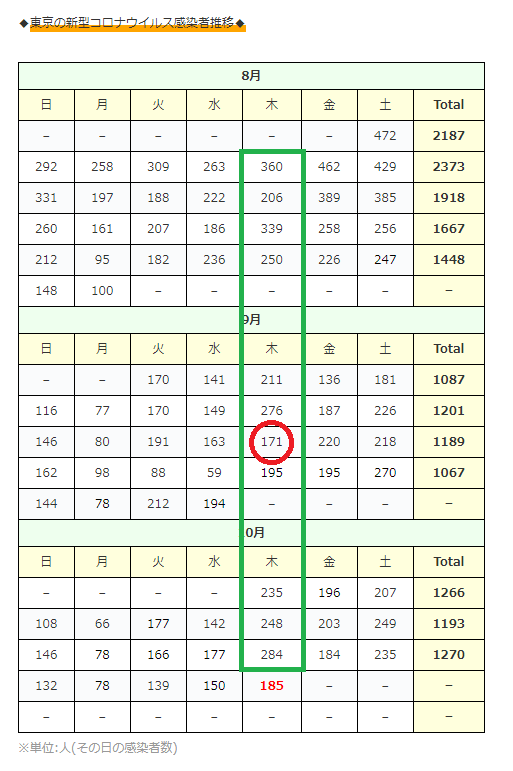 (Don’t let your guard down, but lol) I’m glad that it’s decreasing!

*Today is a male colleague in his 40s

*A different store from yesterday

Today, I would like to introduce overseas topics … or rather, topics that may resume overseas travel in the near future.

In Japan, the government is steadily easing immigration restrictions, but in Thailand, it was revealed that “special tourist visas for foreign tourists who have resumed acceptance may be issued to tourists from Japan in the future.”

By the way, in Thailand, tourists from China have already entered Thailand on October 20th as “foreign tourists for the first time in 7 months” and have been in quarantine for 2 weeks.

Thailand is still in the state of emergency, just “deciding to extend it by one month” yesterday 21st …!

And about entering and leaving Japan …

It seems that a PCR center will be set up at Narita Airport!

It is said that you can take the test for about 40,000 yen 24 hours a day, 7 days a week, without reservation, and receive a negative certificate in a minimum of 2 hours.

If you have just been infected, the PCR test will not be positive for a day or two, so that is a risk, but you can definitely reduce the risk!

However, overseas, following Spain, France, and the United Kingdom,

it seems that the curfew will start from October 22nd in Italy.

Even in Japan, the new coronavirus (COVID－19) has not yet controlled, so it is still scary to come and go overseas…

although it is “for countries where the infection situation is calm”, the government has begun to consider allowing business people who stay within 72 hours to enter the country.

I want to say so!

A vaccine under development by Oxford University in the United Kingdom and AstraZeneca, which should have been completed in September last month if planned, but a man who was participating in a clinical trial died …

And the details are as follows.

・He was in a clinical trial, but was being given a drug other than the vaccine under development.

By the way, it seems that even among the seriously ill patients in Japan at the moment who are undergoing medical treatment, there are no under the age of 40.

And it seems that clinical trials of the vaccine being developed by Oxford University and AstraZeneca will continue.

Today, the number of infected people is high and has increased nationwide …

By the way, there was such news today!

It hasn’t been decided yet, but this year’s New Year holidays may be longer!

However, in the end,

“people want to make noise at year-end parties and countdowns at the end of the year,”

“people want to go to New Year’s Day at the beginning of the year,” and

“people want to make the last minute on the way back from their trip,”

so everyone takes the same action. I feel like that.