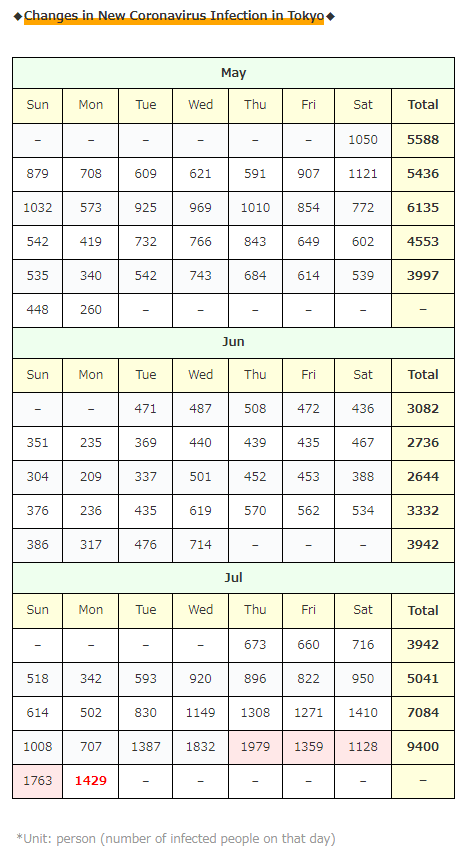 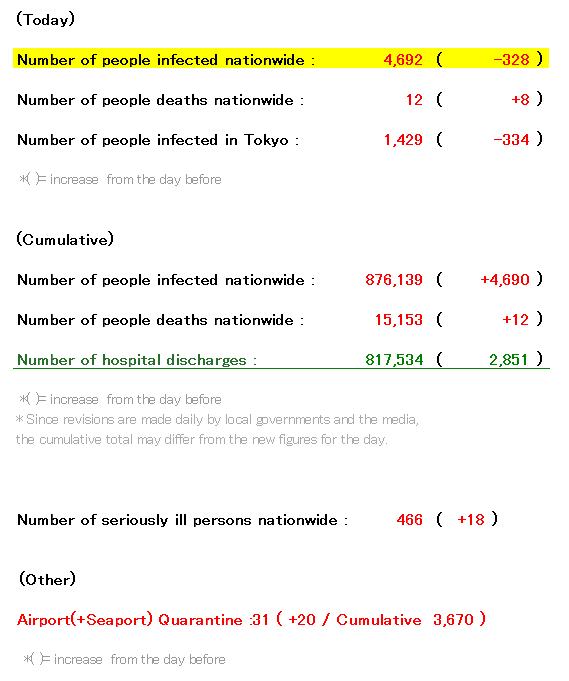 This week is the “after the holidays”, but I’m scared to hear the announcement of the number of infected people every day …! 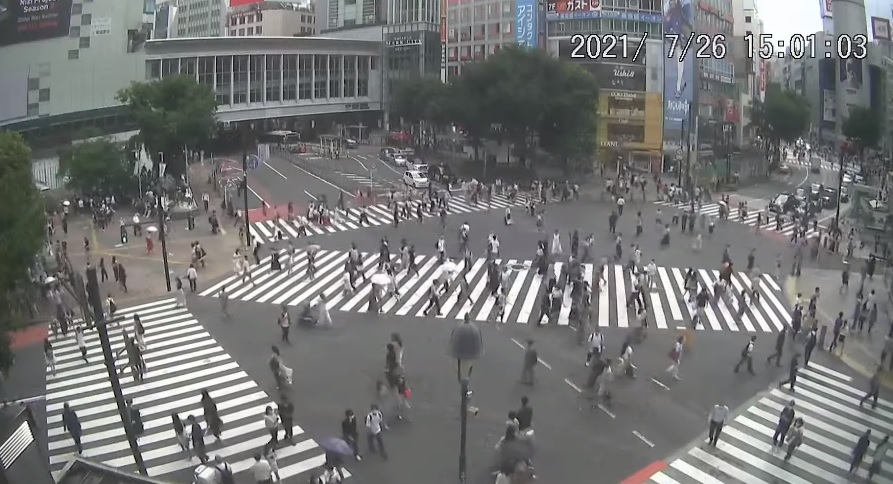 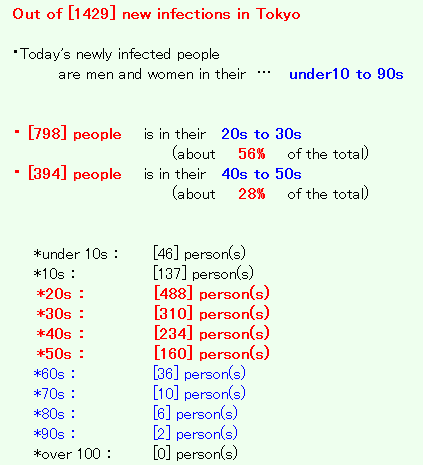 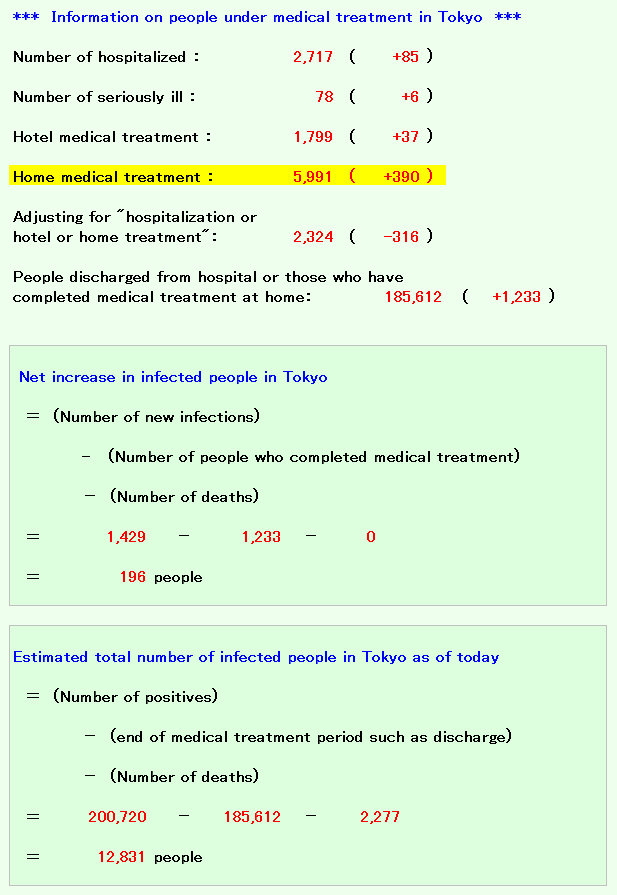 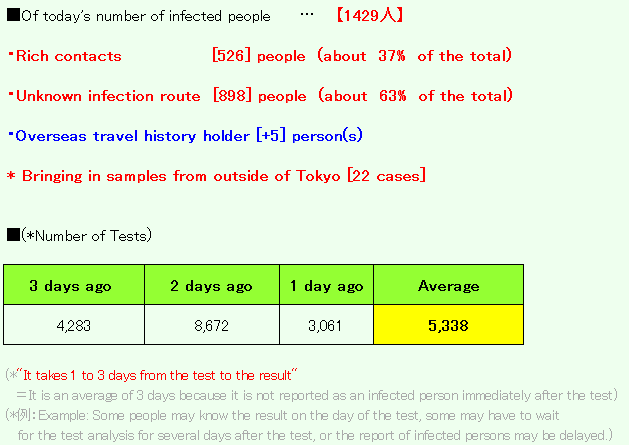 Quarantine reported 3 patients with the new coronavirus and 15 asymptomatic pathogen carriers among passengers arriving at the airport from overseas.

Quarantine reported 10 patients with the new coronavirus and 3 asymptomatic pathogen carriers on vessels arriving at seaports from overseas. 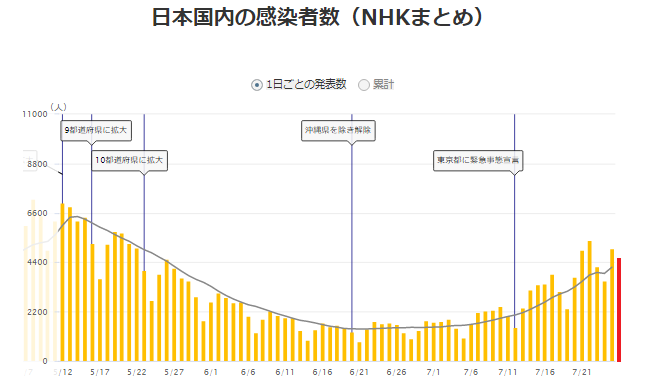 As you all know, during consecutive holidays and after holidays (Monday, the day after a national holiday, etc.), “the number of infected people announced will be considerably reduced” , but…

Yesterday was “the last day of consecutive holidays & Sunday”, but the number of infected people nationwide was over 5,000 … 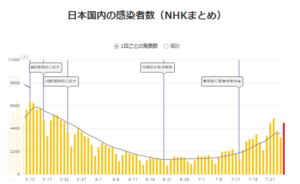 In Tokyo, the unexpected number of “1763 people” greatly exceeded the 2nd and 3rd days of consecutive holidays, and the number was about the same as last week’s MAX … 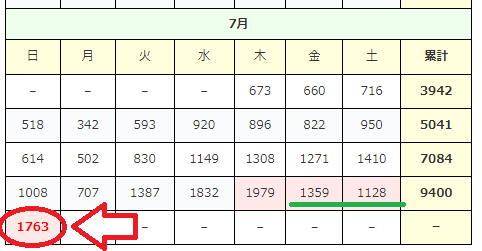 So … I searched for an article yesterday thinking, “What kind of reaction are the leaders of Tokyo and Japan, Governor Koike and Prime Minister Suga?”, but…

There are no related comments at all …!?

It’s a surprise to us … are they both crazy about the Olympics?

By the way, before the numbers were announced, it seems that the two of them were exchanging opinions yesterday at noon …!

Normally … “The infection situation is dangerous …! Prime Minister, do you have any new measures ?!” Like that, they have to be impatient, aren’t they?

Then, at a subsequent press conference, Governor Koike said, “Most of the infected people today are younger generations, so they do not put pressure on medical resources.”

got it…
No matter how much the infection spreads or the number of infected people increases dramatically, she just want to say “The only people who get infected are young people who don’t get seriously ill, so we don’t have to take any measures!”

Even in this 4th wave of “the pace of infection surge over the 3rd wave”, neither the government nor the Tokyo Metropolitan Government seem to take any measures, but…
I just thought the reason was “waiting for vaccination to proceed” … but apparently it was “just because young people are infected, so it’s good” …!

By the way, the vaccination rate is still low in Japan …

Well, “It’s not much different from normal influenza if it doesn’t get worse or die” is true in a sense, but to do that, vaccination has not yet been generalized like “influenza”, nevertheless, the Japanese government has already started it …

It seems that not only Britain but also Japan was actually conducting such human experimentation with the people …!

What will happen … Infection situation in Japan …

In a sense, “government” and “the number of people in the city” seem to be facing the same direction.
However, for those who are afraid of viruses and refrain from going out “for themselves and for everyone”, it’s not a big deal …!

By the way, there was also an article like this …!

Prime Minister Suga has tweeted a congratulatory tweet to the Japanese player who won the gold medal on Twitter! 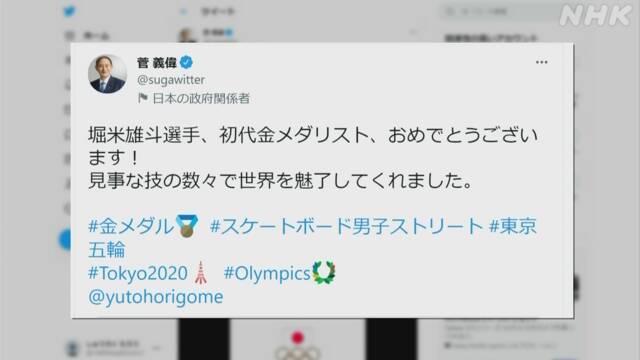 Ah! got it!
Yesterday’s comment on the abnormal number of infected people was on Sundays and public holidays, so he did it not a press conference, but on Twitter!

I’m sorry, Mr. Suga! I was looking down!

When I went to see Mr. Suga’s Twitter triumphantly … 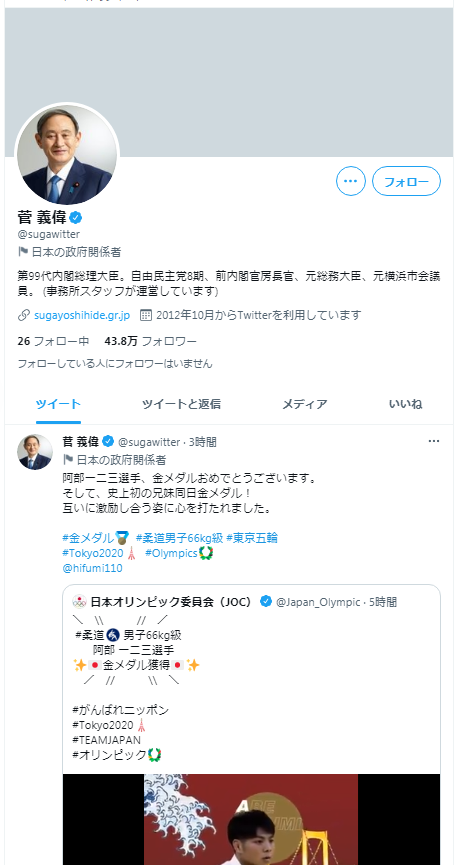 There were 6 tweets yesterday!