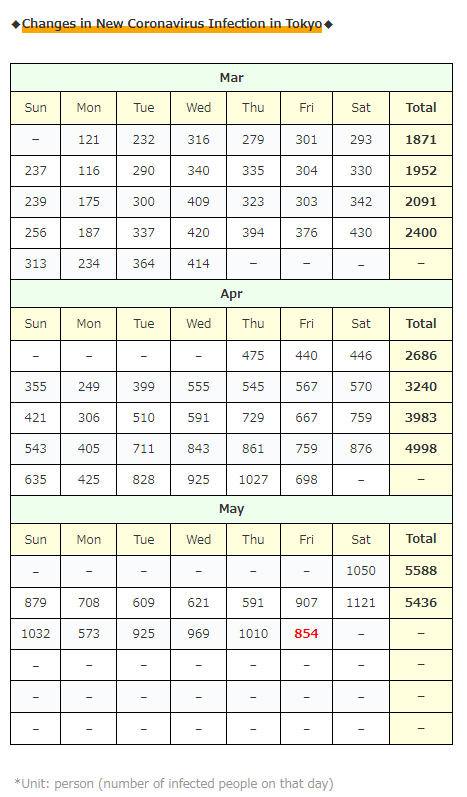 The number of newly infected people in Tokyo has not increased dramatically this week so far …!

The impact of Golden Week should be most apparent in the number of infected people this week and next week, so if it doesn’t increase here, I feel like it will be on a downward trend …!

However, since there are more numbers than before Golden Week, it is still unclear whether it is on a downward trend or just a flat period before the rise … 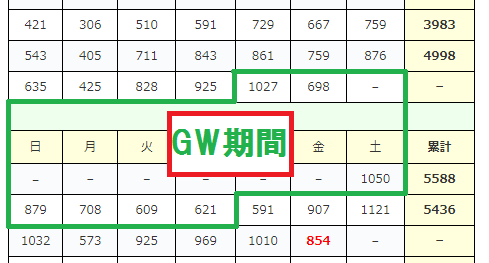 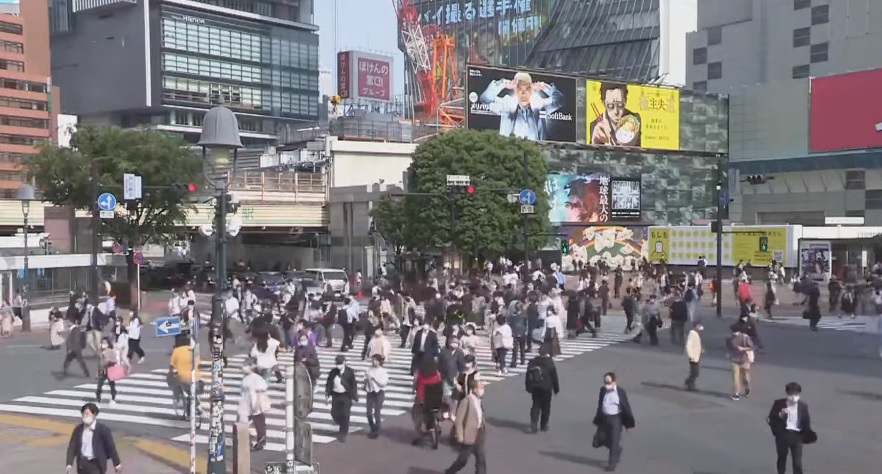 * Bringing in samples from outside of Tokyo [25 cases]

・”Tokai University Men’s Judo Club” in Hiratsuka City
*Today [14] person(s) / Cumulative [17] person(s)
*Other than above, 38 people have been confirmed to be infected … 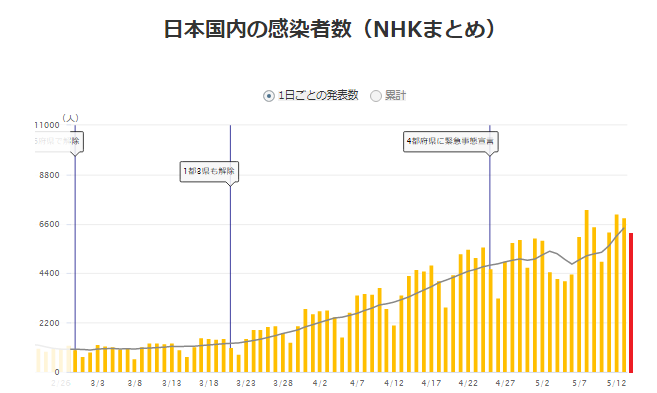 In addition, the following information was available in the news up to yesterday, but it was revised and officially announced today.

→* Regarding the state of emergency, it seems that Hokkaido has a policy of requesting issuance only in Sapporo City.(As of the morning of the 14th)
(*北海道 鈴木知事 国の緊急事態宣言 措置を札幌限定で求める – NHK)

→* Regarding priority measures such as prevention of spread, it is under consideration to apply to Ishikawa, Gunma, Okayama, Hiroshima and Kumamoto.(As of the morning of the 14th)
(*群馬など５つの県に“まん延防止”適用方針 – Yahoo!)

When the government brought the original plan to the subcommittee, experts in the subcommittee suggested changes with a strong sense of crisis.
(*【詳報】3道県に“宣言” 当初の政府の方針変更 その背景は – NHK)

↑ It was an unprecedented event in Japan…!

I haven’t got enough information on this matter yet, so I’ll summarize it tomorrow!

There was a lot of vaccination-related news today!

In Saitama Prefecture, a male doctor who has been vaccinated twice has been infected with the new coronavirus (COVID-19) …!

The effective rate of the vaccine is a little over 90%, so about 10% will be infected, but when it comes to news like this, it makes me little nervous …

The government has set only goals, and the reservation system and response are all left to the local government …

The Japanese government hasn’t done anything about the reservation system, vaccination methods, venues, or how to handle vaccines, so it’s not worth saying “shock.”

By the way, regarding the reservation system, it seems that it was possible to make duplicate vaccination reservations in Yokosuka City due to a system setting error.

Is it some kind of corruption in selecting a vendor, or is it even a friendly (insufficient) vendor?

And the government has announced that it will set up large-scale vaccination venues in Tokyo and Osaka, but it seems that the government has decided to consider supporting the movement to the venue at the suggestion of the opposition party …!

Since Tokyo and Osaka also have a large area, it may take an hour for some people to move, and they are exposed to the risk of infection while moving, so it is natural to support them.

But … what kind of “support” does the government provide? ??

I wonder if it will create a crowded space with a large private bus …?

Also, regarding vaccination-related matters, there was also some news that it is making it a bit lawless because the government hasn’t decided too much on vaccination…

And in Anjo City, Aichi Prefecture, a 66-year-old man was was angry and was arrested for breaking the glass of the automatic door because he was refused a vaccination reservation due to no history of going to the hospital and was offered a mass vaccination by the city.

I understand his feelings, but violence is no good …

It was discovered that the 62-year-old mayor of Kamikawa Town, Hyogo Prefecture, was secretly vaccinated using the waiting frame for the priority vaccination vaccine for people aged 65 and over.

I think the government should decide on such rules as well …

On the other hand, in Yorii Town, Saitama Prefecture, it was discovered that not only the mayor (76) but also the deputy mayor and the superintendent of education, as well as about 100 out of 257 staff members of town, were vaccinated …

Moreover, they were vaccinated as “medical workers” involved in the mass vaccination …
(* The government may only recognize “people who perform medical examinations and vaccinations directly at the venue” as medical professionals.)

I understand a little, but it seems like there is a sense of lawlessness or a “privileged class frame”.

The above is a summary of today’s COVID-19 related news, but what they have in common is that “the government has not decided any rules and methods in detail, and also has not provided the system to the local government.”

In the case of a general company, it is a proof of a competent employee that “the president decides only the goal and the subordinates respond to everything from the method and achieve it”, but regarding vaccination, politics and administration do it, not the general company. Moreover, that involves “life” …

Is that okay? Japanese …!

In a report released by WHO (= World Health Organization) on May 12, they criticized China for losing valuable time due to the delay in the initial response to COVID-19 …!

In addition, the report criticizes that “many countries other than China have taken a wait-and-see attitude without taking active measures to contain infection.”

“ “many countries other than China have taken a wait-and-see attitude without taking active measures to contain infection.” “

You should face COVID-19 a little more seriously!