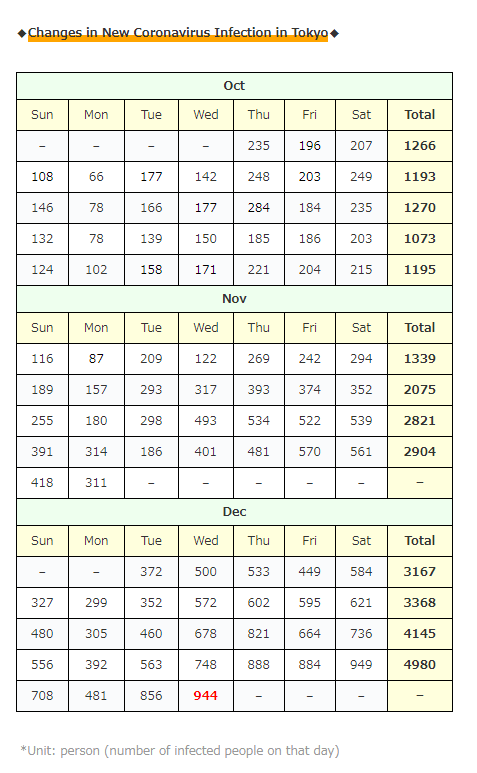 * Has it passed the peak?

・Infection in the facility [75] people

* Infection in the facility [75] people

* Cluster information could not be confirmed today…

(Although the number of infected people is over 1300 …)

* Bringing in samples from outside of Tokyo [48 cases]

・ Hospitals in the prefecture

*Among the infected people counted today, there are [9] cluster relationships, including the above.. (Add up to 1 people)

※* Despite this, I could not find the details of the infection status …

*Among the infected people counted today, there are [12] cluster relationships, including the above.. (Add up to 4 people)

*Among the infected people counted today, there are [7] cluster relationships, including the above.. (Add up to 4 people)

・Facilities for the elderly in Fuchu City

・ Restaurant with customer service at night in Gifu city 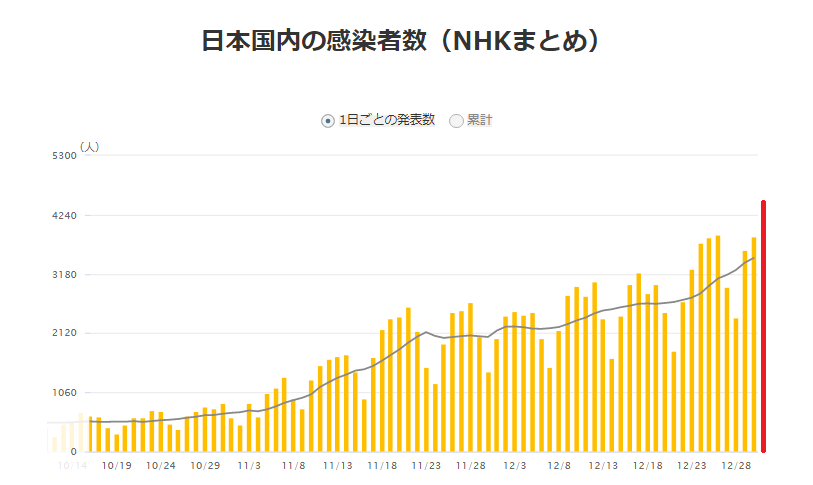 After all it seems that the all-day operation of the New Year’s Eve train will be stopped!

It seems that the operation will be normal during the year-end and New Year holidays this year, and it seems that the extra operation from the night of the 31st to the morning of the 1st, which was done every year for the first time and the first sunrise, will not be done this year!

So, if you take it easy and say, “There are trains every year, and it’s okay if it’s a little late!”, maybe you will miss the last train and cannot go home on the same day! Lol

You will be waiting for the first train in this cold weather! Lol

And yesterday, there was the last monitoring meeting of this year in Tokyo, so I will summarize it!

“If this goes on, there is a high possibility that medical care will collapse.”

“It takes a couple of weeks for the measures to take effect, so stronger measures need to be taken immediately.”

There were signs of the spread of the infection from early November, and quite a lot of people, including medical staff and the general public, lived with a sense of crisis and caution …

If GOVERNER had taken proper measures at that time, which was normally noticed by everyone, the situation would not have been so terrible.

in fact, in the meantime, to date there have been no noticeable measures, just a call.

So, I think that “new coronavirus (COVID-19) infectious disease” from this April revealed that “calling” has no meaning at all.

“A third wave of unprecedented size is attacking.”

“There is a possibility of an infection explosion in the future.”

“Spend the year-end and New Year holidays quietly at home”

“There are two unknowns. Mutants and the first winter.”

“(To the younger generation) Don’t look down on COVID-19 and go out at night for a while.”

“If you don’t control the infection here, I have to declare an emergency”

As mentioned above, it was a rainy day development that only “calling” to come here …!

After all, there was something I learned at this press conference,

even though the number of daily infected people exeeded 400 people,

and even though the number of daily infected people exeeded the same number of peak of 2nd wave,

and also even though the number of daily infected people exeeded 600 or 700 people,

Governor Koike has always has been saying

“assuming that there will be 1000 people” and

“it is only important that the number of seriously ill people does not increase.”

At the press conference yesterday, when the number of newly infected people exceeded 900, Governor Koike said, “There is a possibility of an infection explosion in the future.” as above, but it means that it became clear that “She is thinking that the infection hasn’t exploded yet”…

This image, which was said by other countries as “Japan has a small number of infected people, is amazing!” is about to be destroyed …

By the way, speaking of Japan’s leader in measures against the new coronavirus (COVID-19), Nishimura, the minister in charge of economic revitalization …

He posted a video on Twitter and said, “If the infection continues to spread, we have to declare an emergency” …!

We don’t need threats or calls anymore, so we want you to take effective measures. .. .. ..

The dark topics continued, so at the end we had a bright topic!

The long-awaited vaccine developed by AstraZeneca and Oxford University has finally been approved in the UK! !! !!

It’s nice to have more types of vaccines, but why am I so happy …

Japan has a vaccine supply contract for 120 million doses (60 million people) with AstraZeneca, and the delivery date is from January to March! !!

It’s big news that the vaccine which is the largest vaccine contracted by Japan has been completed!

Super news arrived at the very end of 2020! lol

By the way, the details of the vaccine are as follows

・ Inoculation starts from January 4th in the home country of England

・ After the first inoculation, the second is 4 to 12 weeks later

And the side effects are as follows

▽ It hurts when the injected part is pressed-60%

▽ Pain, headache, and malaise in the injected part-50%

I hope next year will be a good year (thanks to the vaccine)!

I don’t know if there are many infected people or if there are many medical institutions that are closed during the year-end and New Year holidays and the number of discharged people is small, but I see an increase of more than 2000 people for the first time …

This year was really all about “New Coronavirus Infection (COVID-19)” …!

I didn’t expect it to last so long …

I started writing this “summary article” in April, but thank you very much for reading it!

I will continue to introduce necessary information together regardless of the year-end and New Year holidays, so let’s share information firmly and cooperate with everyone to get rid of the new coronavirus (COVID-19)!