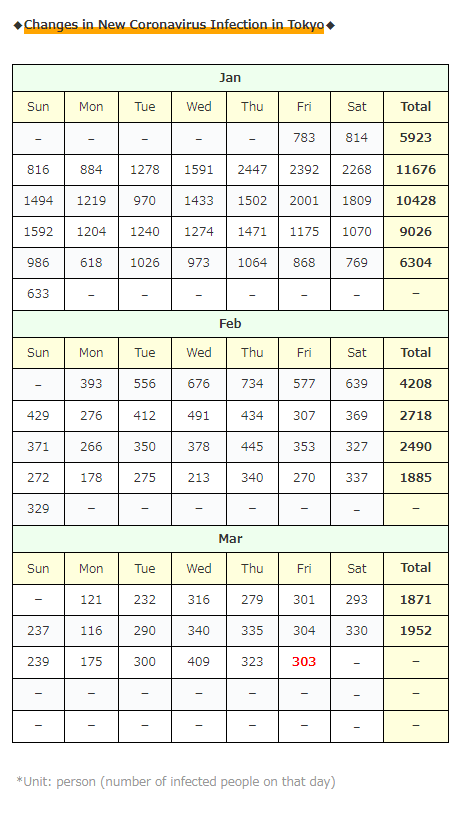 The number of newly infected people in Tokyo is almost the same as the same day of the week last week …!

It has decreased from the same day of the previous week for two consecutive days! 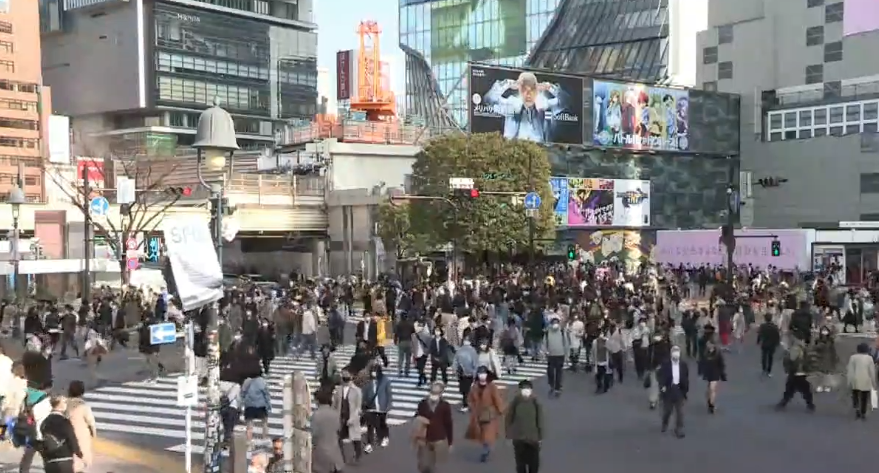 ・Infection in the facility [39] people 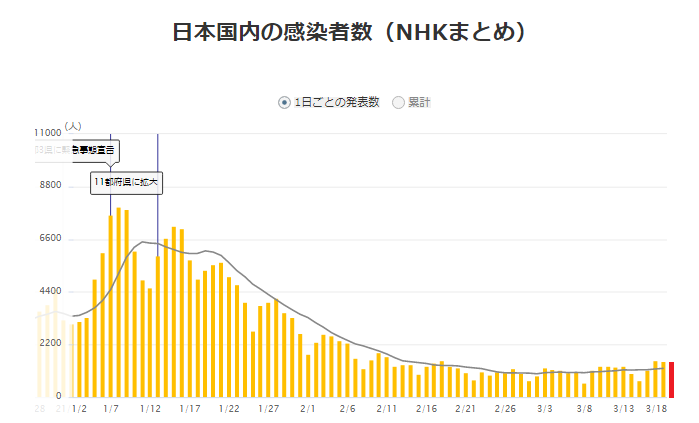 At a press conference by Prime Minister Suga yesterday, it was officially decided that the state of emergency in the four Kanto regions (Tokyo, Saitama, Kanagawa, Chiba) will be lifted on March 21st …!

The content of the press conference was verrrrrrry long (lol), so I’d like to summarize it here!

●I decided to cancel because I met the criteria such as the medical care provision system.

●The number of people in the city is increasing and there is concern about rebound.

●It is important now that the declaration is lifted, so I want to continue taking measures firmly

●The spread of infection must not occur again

●Pinpoint measures for restaurants have been effective in reducing the number of newly infected people by more than 80%.

●I want to take seriously that the number of beds has run short due to the rapid spread of infection.

●Economic measures will continue even if the declaration is lifted
・Cash flow and employment adjustment subsidy
・50,000 yen per child(single-parent or low-income child-rearing household)

●The Olympics are going to be held

●I didn’t have any public relations for young people, so I want to strengthen it.

①First point: Countermeasures against food and drink infection
・Continue to shorten business hours in the 4 Kanto regions
・Dissemination of information on an unprecedented scale on TV and SNS

②Second point: Correspondence to mutant species
・Increase the amount of specimens to be examined from 10% to 40% of the number of infected people
・Management of the number of immigrants by restraining passengers on airplanes

③Third point: Implementation of strategic inspection
・Monitoring inspection for asymptomatic persons
→In April, the number of cases will increase to 5,000 per day
・ Inspection to 30,000 facilities for the elderly

④Fourth point: Safe and prompt vaccination
・Currently, vaccination is being carried out on a scale of 80,000 people a day.
・At least 100 million doses can be secured by June
(For 50 million people)

⑤Fifth point: Strengthening the medical system in preparation for the next spread of infection
・Create a system in which the number of beds in the hospital, the hotel, and home medical treatment can be divided into roles.

It’s a little hard to see, but it was like that!

There was something that didn’t make sense …!

It is necessary to prepare in case of emergency, but it makes no sense that despite saying that “the number of infected people tends to be flat or slightly increase”, they cancel the declaration …!

・Until the end of the month, “rebound prevention period”

※At the monitoring meeting of Tokyo, the analysis is as follows …

If the flow of people increases as usual at events such as cherry blossom viewing, welcome and farewell parties, and graduation trips, there is concern about a rapid expansion beyond the year-end and New Year holidays.

・equest to shorten business hours to restaurants will be extended from March 21st to the end of March
(Only in Kobe, Amagasaki, Nishinomiya, Ashiya, which is the same as the present)

・The request for shortening business hours to restaurants will end on March 21st.
(Only a call to refrain from meeting is for 4 people or less, within 2 hours, and drinking parties)

・The request for shortening business hours to restaurants will end on March 21st.
→However, Nagoya City will be extended until the end of the month
(Until 10:00 pm, cooperation fee changed from 40,000 yen to 20,000 yen)

Probably in most major cities + 4 Kanto areas, it seems that only requests to shorten business hours to restaurants will continue until the end of the month …! 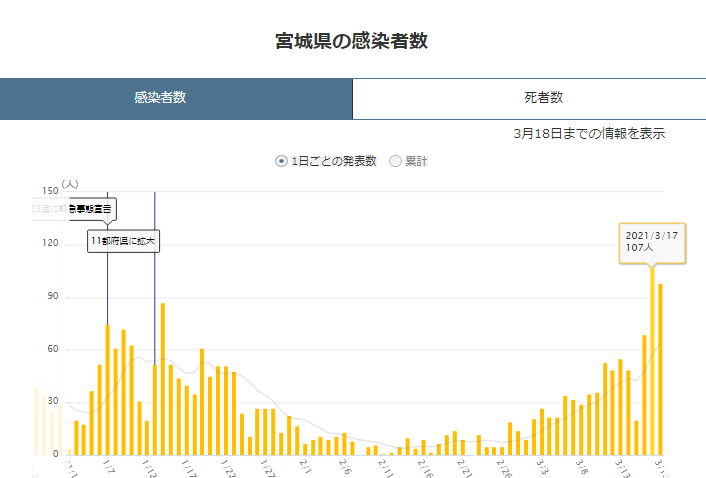 (Changes in the number of newly infected people in Miyagi Prefecture) 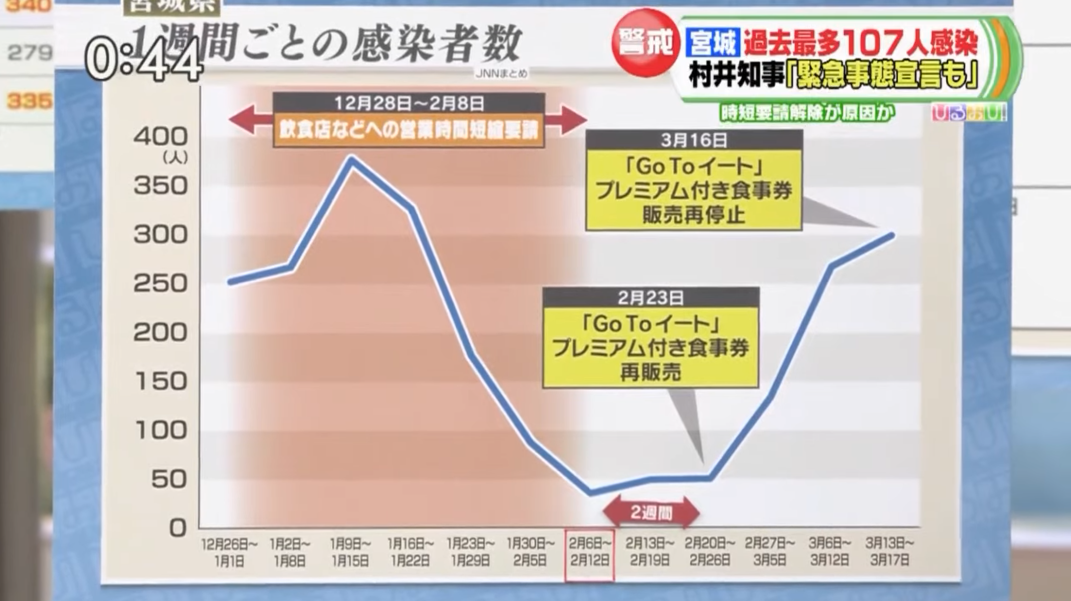 As you can see in the image above, it seems that the cause is the restart of “Go To Eat” …

In addition, the governors of 32 prefectures, who were excluded from the second state of emergency, seemed to demand a gradual resumption of “Go To Travel” …!

I know that it is economically limited, but first of all, but if we do not completely suppress the infection that is settling down, it is likely that the infection will spread again …

Everyone is facing different directions, so it’s a difficult situation …! :<

There were other news today as below!

“Japan’s global immigration restrictions will continue for some time.”

Vaccinated nurses in their 50s are infected!”

→Since it is still the first vaccination, it is natural to get infected + It seems that it may have been infected before vaccination.

Oh yeah, it seems that the Tokyo Metropolitan Government has ordered restaurants that do not comply with the request to shorten business hours to comply for the first time in Japan …!

It’s only 3 days until the declaration is lifted …

“Why does the government order only our stores?!”

However, I don’t know if enough cooperation money is paid for each store size, so it’s a difficult place …