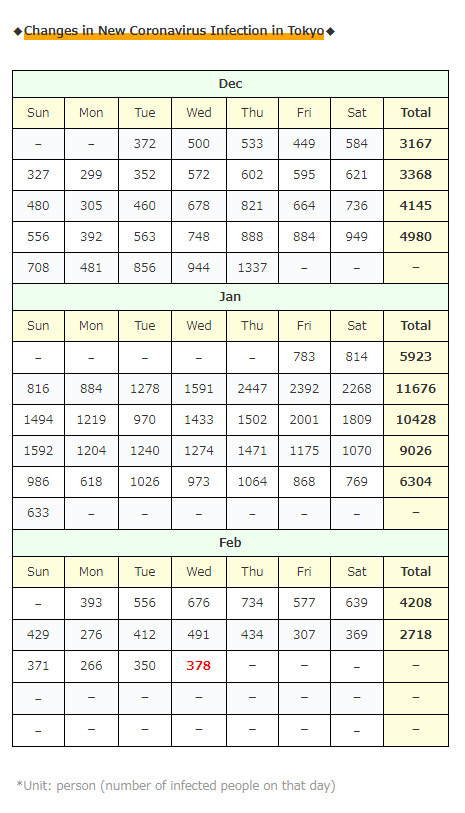 The number of new infections in Tokyo continues to be “less than the same day of the last week”!

Tomorrow is Thursday … Last Thursday was a holiday …!

I’m wondering what the numbers will be after tomorrow, and whether the number of infected people this week will be affected by the holidays …! 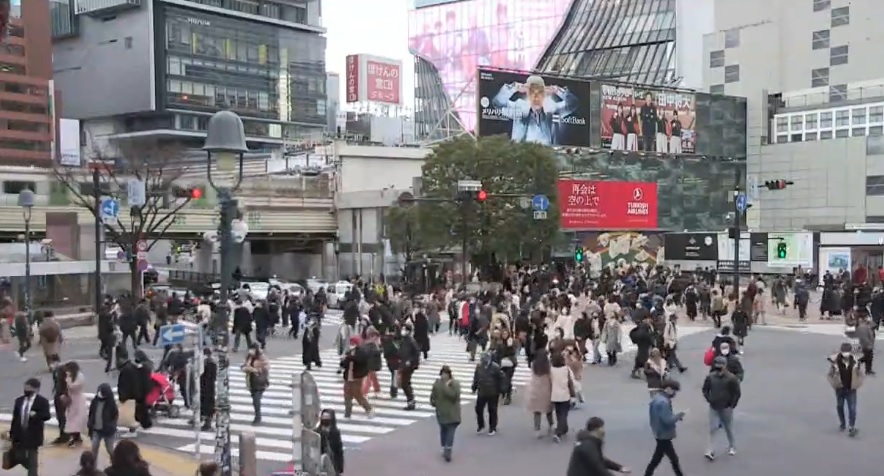 It was a little warm today, and there were a lot of people today! 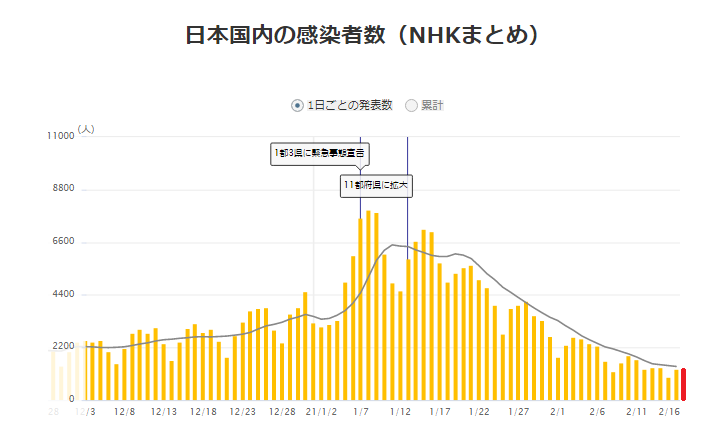 Finally, vaccination has started in Japan from February 17th today!

First of all, it seems that 40,000 medical workers (100 medical institutions) are targeted!

The first flight of Pfizer’s vaccine that arrived from the EU last week was for 64,350 containers, so the number of vaccinations available is calculated below!

64,350 containers x 6 doses (number of inoculations that can be taken from one container) 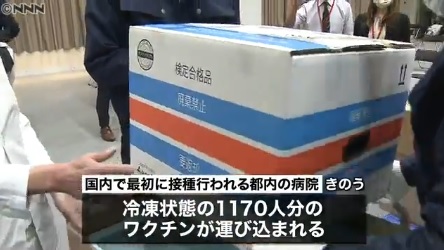 (* Vaccine is being carried)

* By the way, here I told you yesterday ↓

And there was an easy-to-understand explanation of the syringe problem!

* Vaccine syringe problem …
the number of vaccines that can be collected from one container of vaccine has decreased from 6 to 5 and the number of people who can be vaccinated has become a big problem. 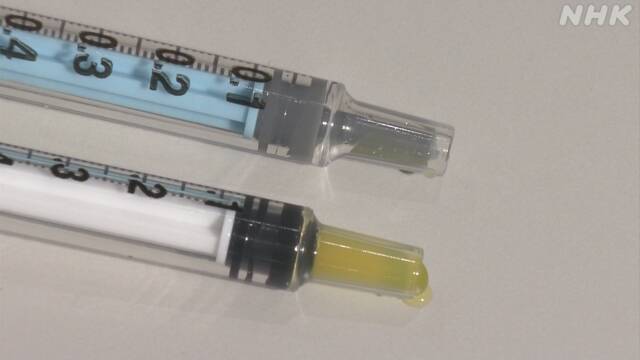 when inhaling orange juice, ｔhe syringe (white onewhich can only be taken only 5 times), is wasted on the tip

It seems that the government has urgently requested the manufacturer to increase production, but I hope it will be in time for the large-scale inoculation …!

Because if the supply is not in time,

↑ Regarding this syringe problem, they were able to secure a syringe that can inoculate 6 doses for 40,000 people who will be vaccinated in advance!

In addition, Pfizer’s vaccine requires two doses per person, so there are two strategies for the vaccine that arrived this time worldwide.

As a result, the number of people who can be vaccinated will change immediately, but it seems that the Japanese government has decided to choose method (2) …!

By the way, after the advance vaccination of 40,000 people, it seems that 3.7 million medical workers nationwide will be given priority vaccination.

Also, here is a summary of side effects yesterday ↓

It seems that there will be a follow-up time of about 15 minutes after inoculation to deal with side reactions, so it’s safe!

Even so, looking at the vaccination schedule in Japan, the following questions arise, but

“Why does the vaccination take so long?”

“Why don’t you inoculate more and more as soon as it arrives?”

Regarding that, Kawasaki City, Kanagawa Prefecture has just announced the basic policy of vaccination!

・ Set up a group inoculation venue among citizens and in the Education and Culture Center.

・ From April 1st, it will start in advance for the elderly.

I’m not convinced because it’s only 5 days a week and 8 hours a day to respond despite of this unprecedented catastrophe.

It can’t be helped because of the amount of vaccine supplied from overseas …, but

I want the government to spend more days and more time spreading the vaccine throughout Japan as soon as possible …!

And in Japan, where such vaccination has finally begun … In Hokkaido, a man who was refused hospitalization due to the tight medical system of the hospital died the next day…

Furthermore, yesterday, 23 people were found infected with a mutant in the United Kingdom in the country, and the areas were scattered,

Mutant clusters are expanding in Saitama …

Even if the number of infected people seems to be decreasing, there are still many problems, and there are many signs that the infection is likely to spread again.

Vaccination began in the UK at a time close to the fastest in the world (end of December), and now 20% of the population (15 million people) have been vaccinated, but there are still strict restrictions on going out …

However, this is the situation in Japan, where vaccination has just begun … ↓

(From the summary article on February 16) 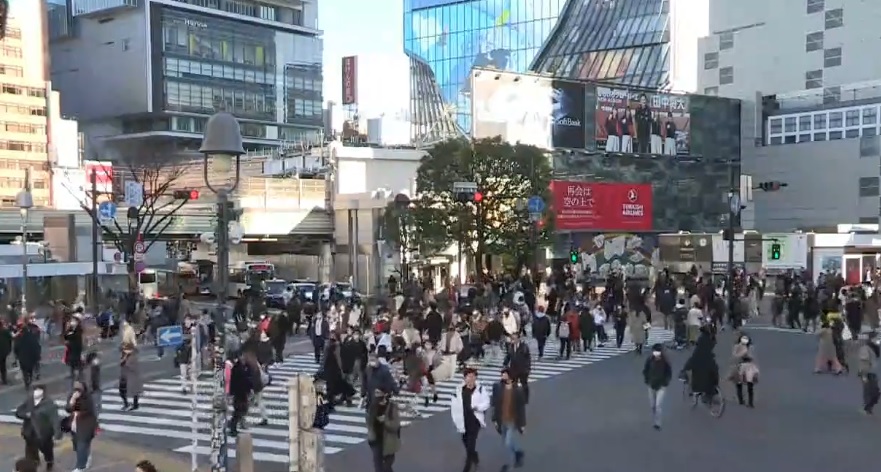 The city looks as usual (in the sense that there is no self-restraint atmosphere).

I hope they will have a little more sense of crisis …

According to the Japanese government’s plan, the vaccination will reach the entire population before summer …?

I hope we can escape without expanding to that extent …!

Today’s performance on the first day of vaccination was like this! 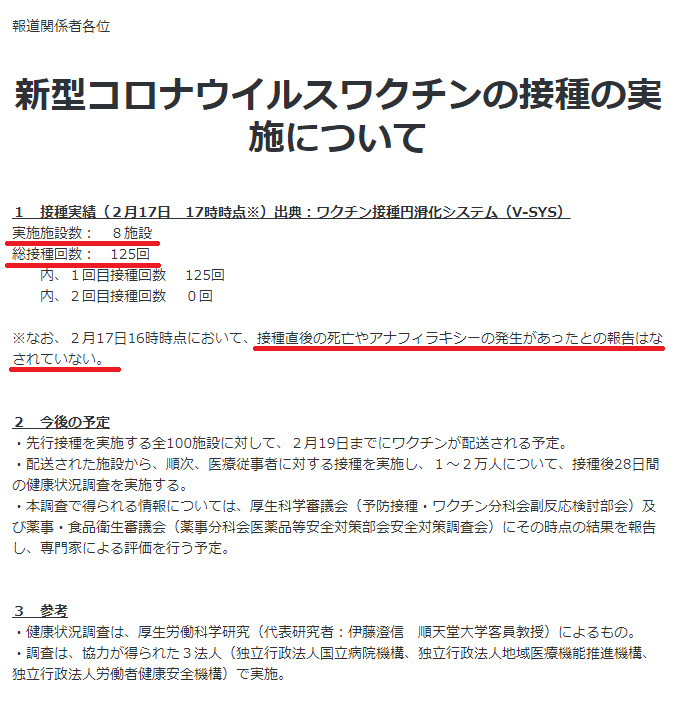 This is the news of the WHO (World Health Organization) research team who recently visited China to identify the source of the new coronavirus (COVID-19) infection and returned!

“The Chinese side had already completed a lot of research before the research team arrived.”

“I wanted to see more data and analyze it deeply.”

“In December of the year before last, there were clear signs that the infection was more widespread than previously reported.”

“All 174 patients reported in December of last year were seriously ill = there must have been many other mild and asymptomatic cases that were not reported at that time.”

“Before December, there were no clear signs of infection anywhere in China, including Wuhan.”

I’m sorry for being super long!

However, there was a lot of important information, so I summarized it carefully!

One thing I’m glad to know is that the the research team don’t give extra consideration to China!

I want them to thoroughly investigate the source of infection and prevent this from happening again …!