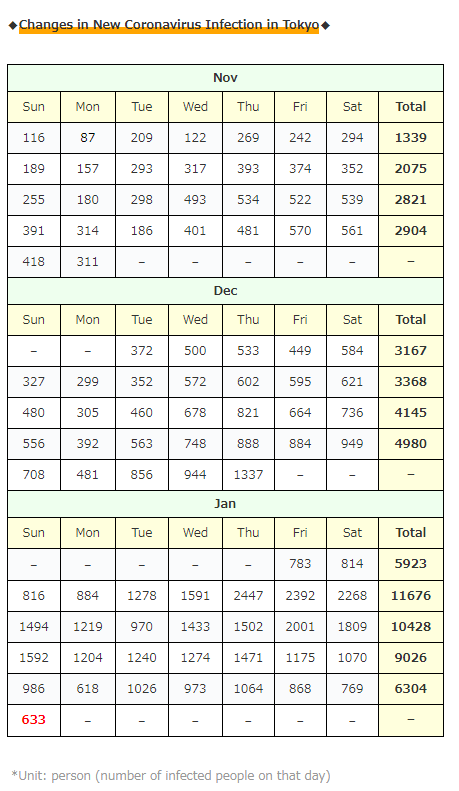 The number of newly infected people in Tokyo is the same as on Saturdays and Sundays before Christmas …! 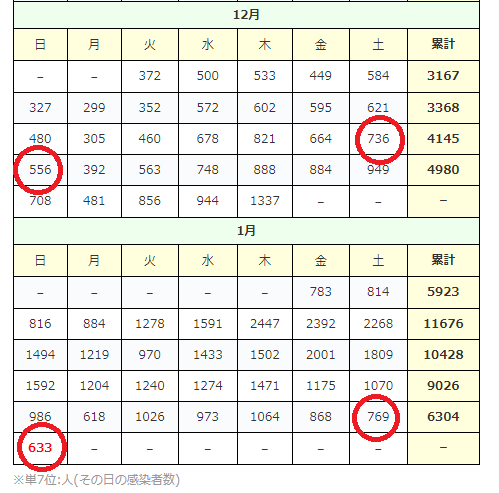 Well, what’s going on this week … 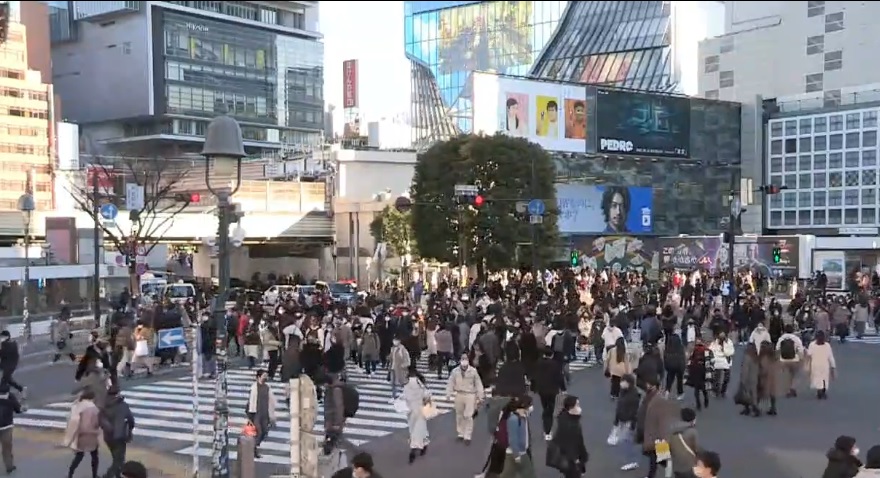 ・Infection in the facility [135] people

* Infection in the facility [135] people

* Infection at a dinner with friends and acquaintances [4] people

→There are more than 600 infected people, and there are only 4 people …?

* It seems that it was [0 people] today for the first time in a long time! (No announcement) 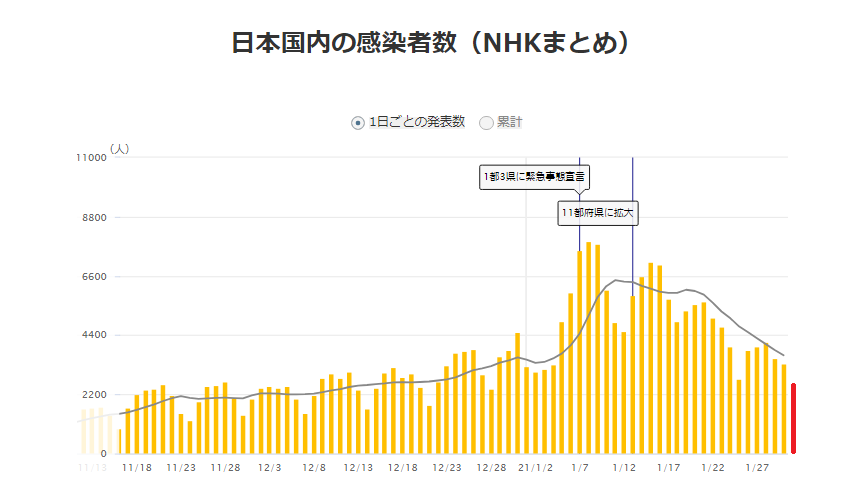 As you may know, the information on infections of British mutants recently announced in the Kanto erea seems to be related, and it seem to be a cluster after all …!

The Ministry of Health, Labor and Welfare seems to have said
“there is no spread of the infection in this matter.”

We’ve seen this scheme soooooooo much, so we can’t trust remarks of them  … (dry laugh)

Well, I always do my best to summarize “To be able to cover almost all domestic COVID-19 information for one day just by looking at this summary article.” … but this was the only major article related to COVID-19 today…!

So today, I’m going to look up a little maniac (but light) information and introduce it, and three weeks have passed since the reissue order of the state of emergency that started on January 8 (Friday), so I would like to summarize the current infection status of Tokyo! 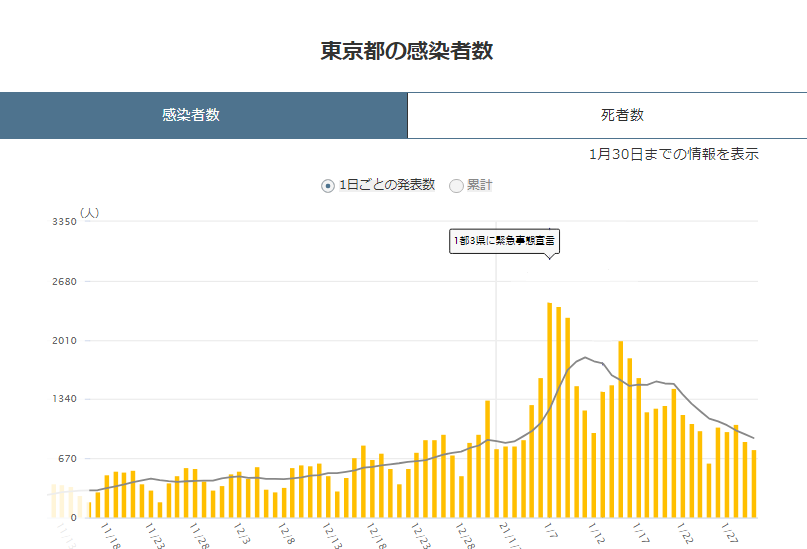 By the way, about the basic guideline / idea for summarizing, I would like to consider the following, which I mentioned earlier in the effect of lockdown in Europe!

②It will start to decrease in the next 2 weeks

③It will decrease at once in the 3rd week

(The summary article on December 3 ) 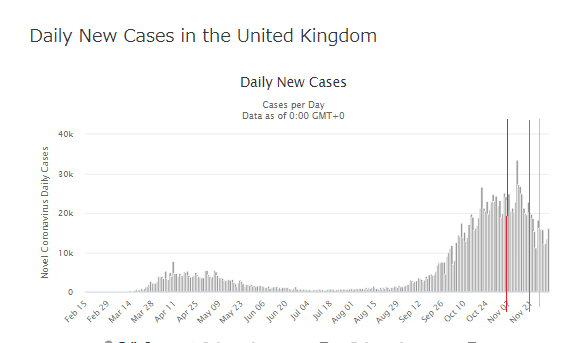 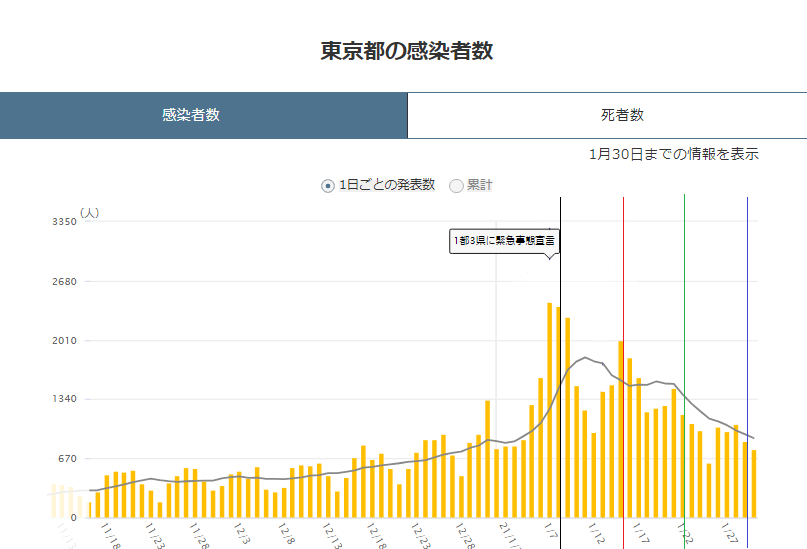 First, I drew a line from the 1st week to the 3rd week!

After all, it seems that there are the following tendencies like the lockdown in Europe!

①The peak will come by the first week

②It starts to decrease in the 1st and 2nd weeks

③It will decrease sharply in the 2nd to 3rd weeks.

However, Japan’s state of emergency (second time) is not a strict regulation like in Europe,

・ Going out restrictions (with fines)

but a loose measure, so it seems that the decrease is less than we expected in the third week …

Well, looking at the situation so far, it seems to be some effective!

However, there are some uncertainties …

If I modify the same graph a little more … 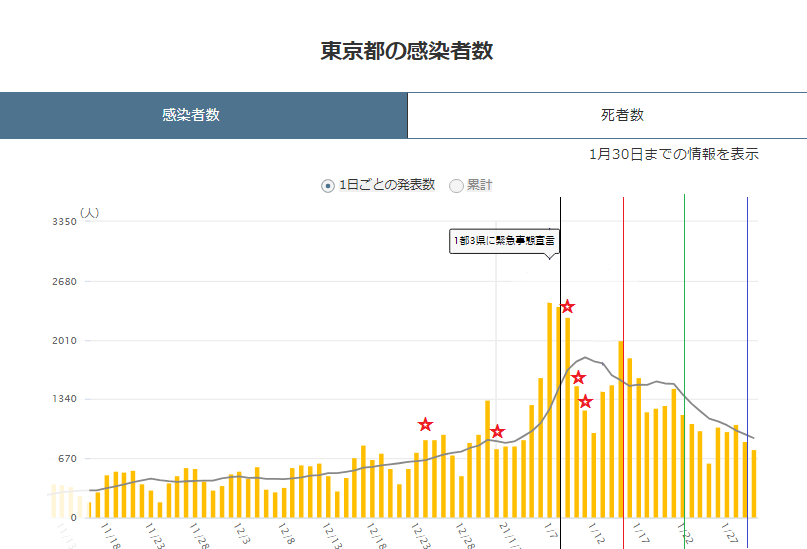 I put ☆ marks on those days!

When we look at it like this, it also looks like “the influence of each event has just passed”, which is “a big explosion of infection from day of the event to the next 1 week” … 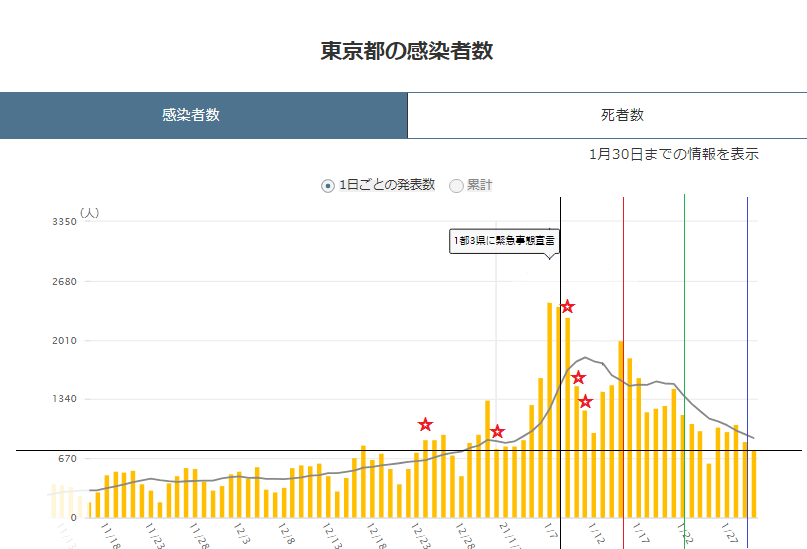 It looks like the level just returned before the “New Year’s Special Event Rush” (←lol) started (December 23, before Christmas) …

That’s why I used the expression “return to the beginning” in yesterday’s “summary article” and “Twitter bulletin”!

Well, whether it will remain flat or continue to decline, really we have to pay attention to the next week from here!

* By the way, the number of seriously ill and dead people in Tokyo is like this ↓

＜Number of seriously ill and dead in Tokyo in January＞

Regarding the “number of seriously ill people”, it is difficult to refer because it may change to “death”, but anyway, the number of deaths has clearly increased too much recently…

It is said that

However, there are so many people who die every day, so after all, the new coronavirus (COVID-19) is an enemy of humankind that must be eliminated quickly. .. ..

Well, that’s all for the summary, but next week’s numbers really seem to be important!

In early January, “2300 new infections per day!” had too much impact, so I think we see recent numbers like “It’s decreased!”, but actually, it seems that we have just returned to “when the infection spread and turned pale in December” …!

Either way, I don’t want you to feel the pain of getting infected, so let’s talk to each other about infection prevention for a while and cooperate!