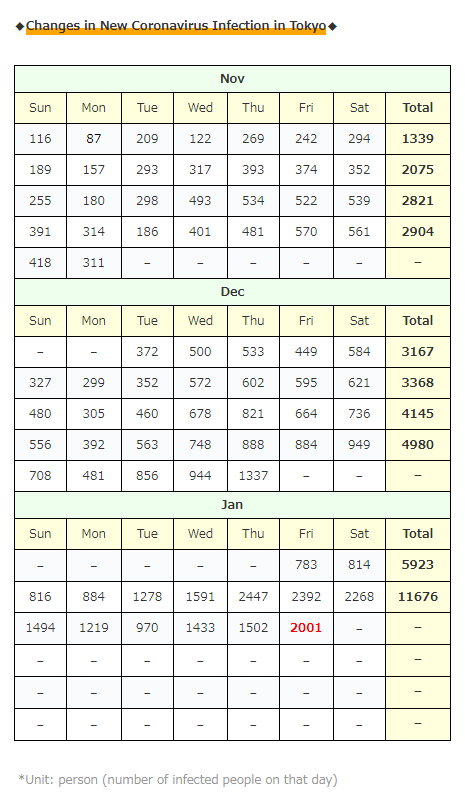 The number of new infections in Tokyo has been lower than last week for the past few days …!

I can’t say anything because it’s too unclear how much the impact of the New Year holidays and the three consecutive holidays will be, but is it actually increasing or decreasing …

・Infection at a dinner with friends and acquaintances [52] people

・Infection in the facility [150] people

* Infection in the facility [150] people

・Nursing care facility for the elderly “Maple” in Ayase

* Other than that, I don’t think it is counted in the number of infected people in Kanagawa prefecture, but it seems that 39 people were infected at “US Army Yokosuka Base” …

* Only information on the dead was available today.

* In addition, it seems that a new cluster has occurred below.

*Among the infected people counted today, there are [8] cluster relationships, including the above.. (Add up to 3 people) 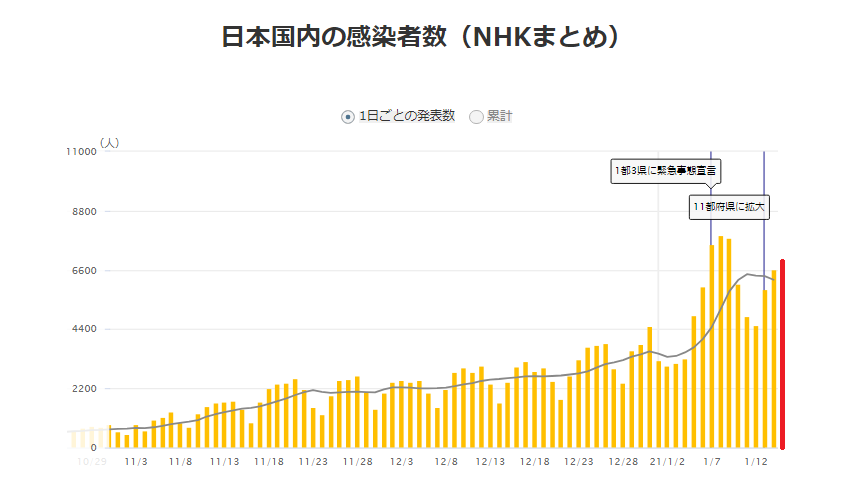 There are various movements other than the 11 areas subject to the state of emergency!

Hokkaido － Extend the intensive countermeasure period by one month

Hiroshima City － Measures similar to the state of emergency

It is a movement unique to each prefecture, or it may be led by the government …

I think it’s better to make a state of emergency all over the country, right …!?

But that doesn’t seem to be the case…

(* Looking at Europe and the United States, it seems that it is common worldwide to “set the strength of measures for each city” …)

By the way, in Osaka, according to Governor Yoshimura …

The guideline for canceling the state of emergency is “the number of newly infected people per day is 300 or less” …!

It is said that the cancellation standard for Tokyo is less than 500 people, but it feels like “Why are everyone so low in consciousness …?!”

(In Japan, the word “highly conscious person” is popular. As a ridicule of a person who have too strong self-consciousness)

By the way, according to Professor Nishiura of Kyoto University, who specializes in infectious disease analysis.

As a result of simulating Tokyo, it seems that if the number of infected people per day is less than 500 and the state of emergency is canceled, it will re-expand within two months …

(* This data is also submitted as a document to the expert meeting of the Ministry of Health, Labor and Welfare.)

Well … you can understand it without looking it up …

It may be said that “in consideration of the economy”, but I think that it will be economically dead to release it halfway and prolong it for a long time, right …?!

By the way, in France in Europe, which has been locked down for a long time since autumn and is struggling to prevent the new coronavirus (COVID-19) …

Even France, which has been taking strong lockdowns and taking various measures since October, is further strengthening its measures!!

Even if an emergency is declared, it remains “normal daily life” … ↓ 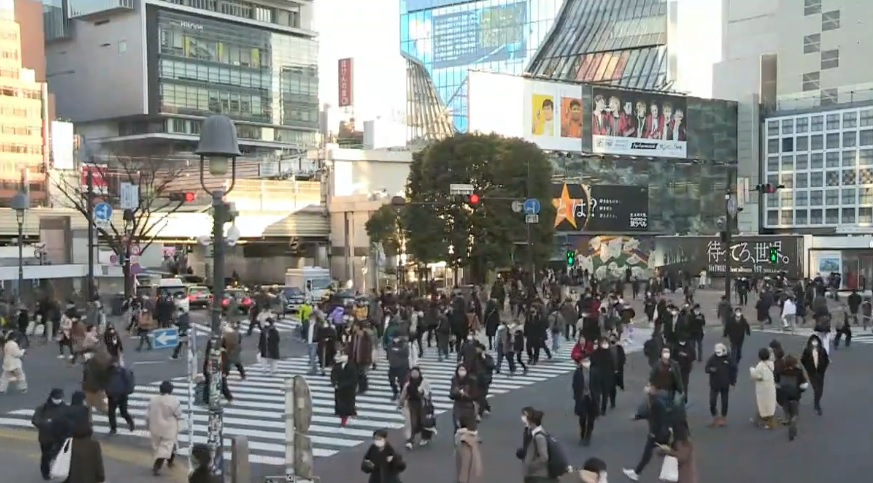 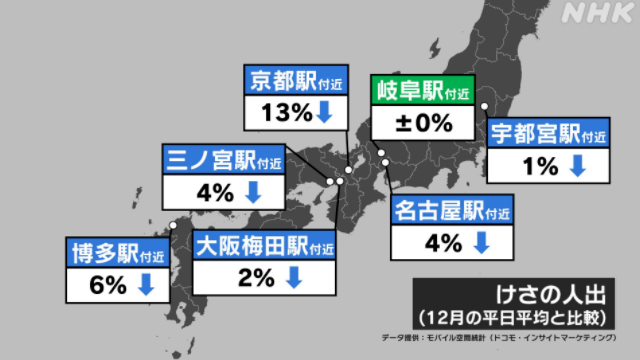 Not long ago, people would have argued that:

“No, the number of infected people is completely different between Japan and Europe. lol”

“Japan has a different infection situation”

so I’d like to see “people who intend to bring it to an end”!

The average number of people has increased by about 2000 in the last few days. .. ..

In 11 areas where the state of emergency is being issued, the reception hours of Yamato Transport’s sales offices will be shortened to 8:00 pm! (Until the declaration is canceled)

(* Limited to stores that were open until later)

I wonder if they can investigate properly this time … (dry laugh)

I really want them to investigate and find out the cause so that this global virus disaster will never happen again!