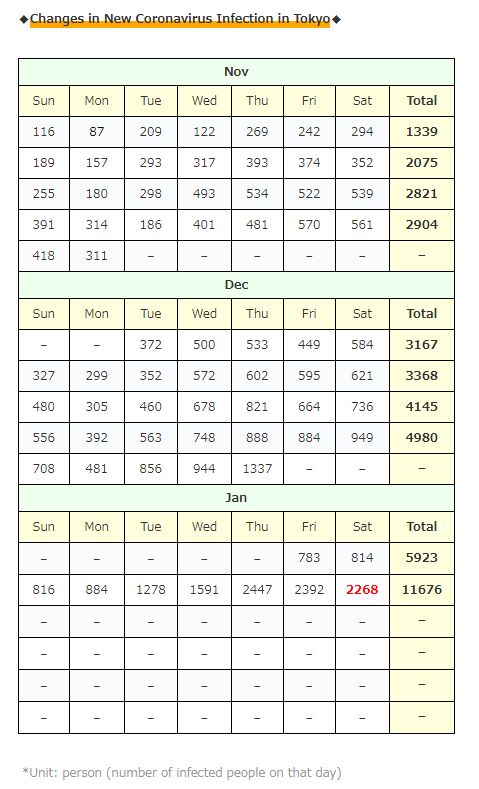 What will happen next Wednesday-Saturday! (cry)

And today is Saturday, so I calculated the total number of infected people in Tokyo for one week using my usual calendar … 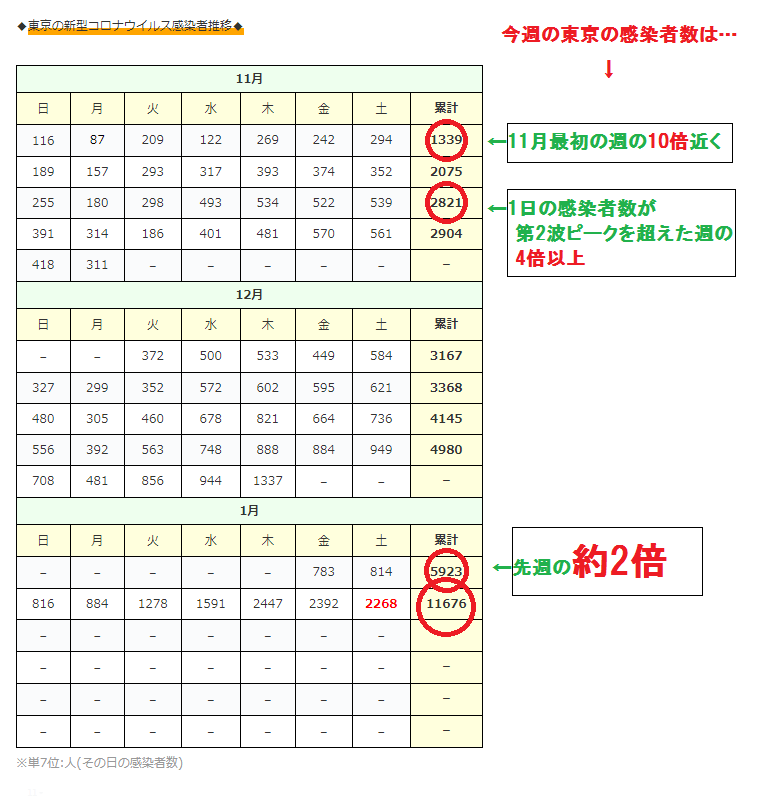 (*The number of infected people in Tokyo this week is about 10 times that of the first week of November.)

(*The number of people infected in Tokyo this week is twice as high as last week.)

The summary article on December 3 also summarizes the lockdown in Europe and after that, but even if “the state of emergency in one city and three prefectures is valid”, it seems that it will continue to increase for another week … cry

(* In all European countries, the number of infected people reached a peak one week after the lockdown and gradually decreased from there.)

However, that would be “if the state of emergency in 1 metropolitan area and 3 prefectures was valid” …

・Infection at a dinner with friends and acquaintances [79] people

・Infection in the facility [40] people

・6 university students who traveled at the end of the year

* Bringing in samples from outside of Tokyo [45 cases]

・Medical institutions in the prefecture

*Among the infected people counted today, there are [6] cluster relationships, including the above.. (Add up to 5 people)

*Among the infected people counted today, there are [12] cluster relationships, including the above.. (Add up to 3 people) 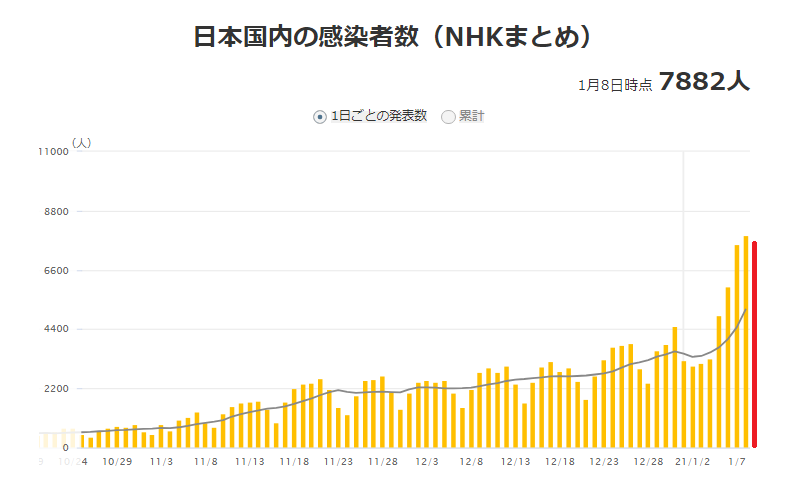 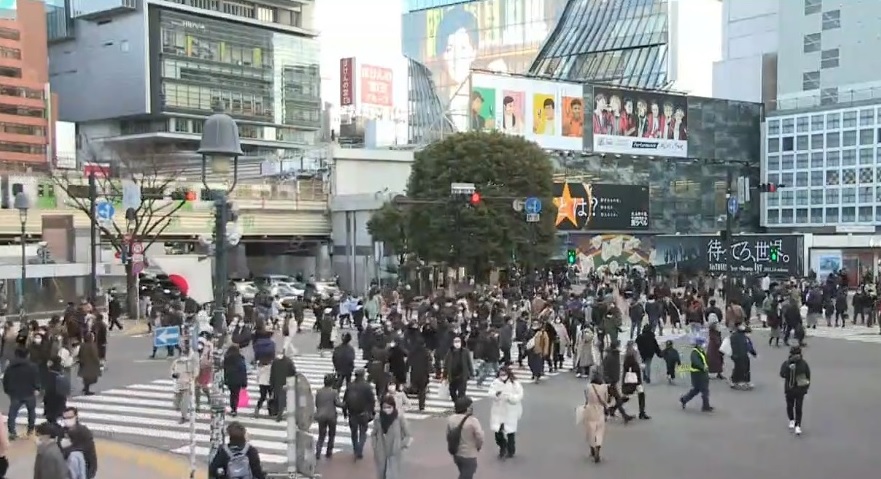 I don’t think people are going to refrain too much …

Yesterday and today, there was a lot of movement to declare an emergency in areas other than 1 metropolitan area and 3 prefectures …!

There was so much news that I saw as below

* Scheduled to announce its own state of emergency on the 9th

Toky → State of emergency is being announced

Kanagawa → State of emergency is being announced

Chiba Prefecture → State of emergency is being announced

Osaka Prefecture → Scheduled to issue a state of emergency

Kyoto Prefecture → Scheduled to issue a state of emergency

Hyogo Prefecture → Scheduled to announce a state of emergency

If it get here, we should make a uniform national declaration again like in April …?

(The number in parentheses is the number of infected people on that day.)

＜* Number of newly infected people in each prefecture on January 8＞

(* Red is the prefecture I picked up earlier)

It’s so widespread all over the country …!

How about in the world …

(One person dies every two minutes)

United Kingdom → Mayor of London declares “out of control”

(= Equivalent to a serious accident or attack)

This is the result of “strong regulatory lockdown” !!

Nonetheless … Japan intends to do something with loose measures …

Entering from such a foreign country …

The only “airport quarantine” that was strengthened in line with the state of emergency was “submission of a negative certificate within 72 hours of departure from the partner country.”

Like Taiwan, we can feel relieved a little if the government decide that “when people enter Japan, they must be quarantined for 14 days.”, right?

There are too talented politicians in Taiwan, so I envy them too much! lol

By the way, the current Japan is … 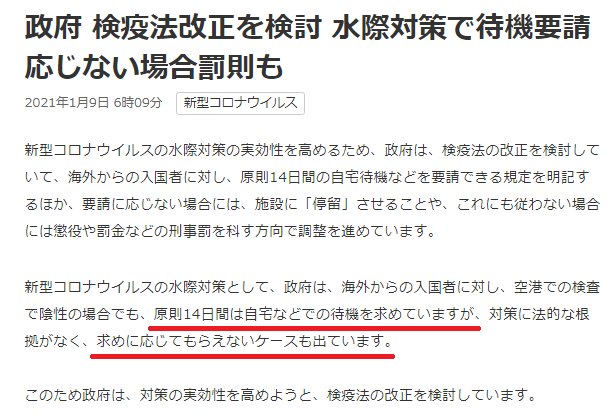 (*”The government requires immigrants to quarantine their homes for 14 days after entering the country, but in some cases they do not respond to the request.”)

This is the situation now…

In Japan these days, even if the infection explodes, (it’s the same as having a drinking party during the year-end and New Year holidays,) but I’m a little scared that individual freedom is being respected too much and it is becoming just a “selfish” national character…

Finally, I will briefly summarize the other news!

・Refrain from participating in meetings that accompany meal

・Refrain from going out unnecessarily after 8 pm

Does he have to tell them that … What is the politician’s dignity?

In Kanagawa, where a COVID-19 patient died at an accommodation facility the other day, it seems that a man in his 60s who is undergoing medical treatment at home has died …

Such Kanagawa is the first in Japan to stop investigating close contacts, saying, “It’s meaningless because the infection has spread too much.”

It seems that they rely only on the smartphone app “CoCoA”.

Which of the following will change the “announced number of infected people”?

②The number of infected people will decrease because the investigation will be stopped.

WHO (= World Health Organization), who went to China to investigate the source of infection and was not allowed to enter the country in the summer and just the other day,  but

it seems that they said “China agreed to provide us with a detailed possible date within a few days!”

I want them to thoroughly investigate the cause so that this will never happen again!

Yesterday was the first night after the reissue of the state of emergency!

There were many articles about “the state of the shops that are closed at 8 pm”, but how many shops actually comply it?

The government and each local government will end up with vagueness every time,

so this time firmly

①How many stores comply it?

I want them to research and announce it!

Anyway, it seems that the virus is still spreading in the city.