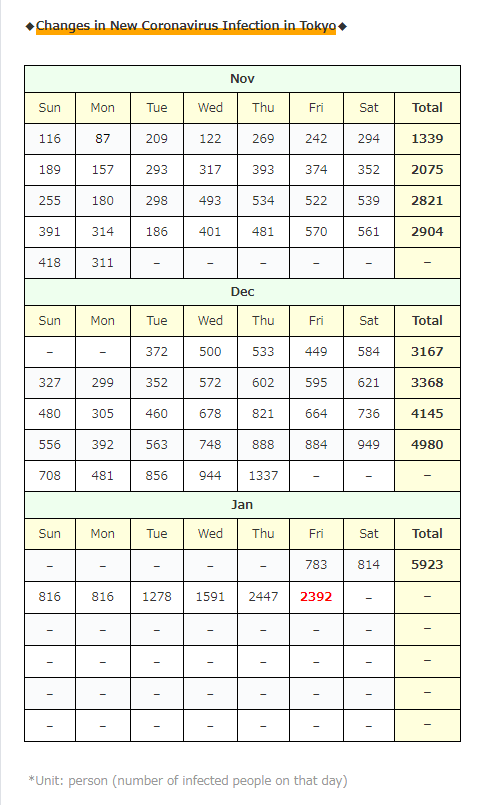 The number of newly infected people in Tokyo has come out to show that yesterday’s 2,447 people were not accidental …

I have no choice but to pray that the number of infected people will decrease with the state of emergency …!

・Infection at a dinner with friends and acquaintances [88] people

・It seems that many cases of multiple infections have been confirmed at year-end drinking parties and gatherings of relatives and friends.

・We could not confirm the outbreak information only with information such as male staff in their 20s at Itabashi Ward Office and 2 students from 2 elementary schools in Meguro Ward.

* Bringing in samples from outside of Tokyo [42 cases]

（* Since the infection exploded at the end of the year and the beginning of the year, “overseas travel history holders” suddenly started to be counted every day, but is there something to do with it, or has it come to be investigated firmly …)

（* Before the year-end and New Year holidays, there was only one person a month.）

*Among the infected people counted today, there are [12] cluster relationships, including the above.. (Add up to 4 people)

*Among the infected people counted today, there are [6] cluster relationships, including the above.. (Add up to 5 people)

*Among the infected people counted today, there are [4] cluster relationships, including the above.. (Add up to 3 people)

* There were no details for each, but it seems that 5 clusters (7 to 5 people) have been confirmed.

(2 medical institutions, 2 facilities for the elderly, 1 downtown area at night)

・Facilities for the elderly in Kyoto City 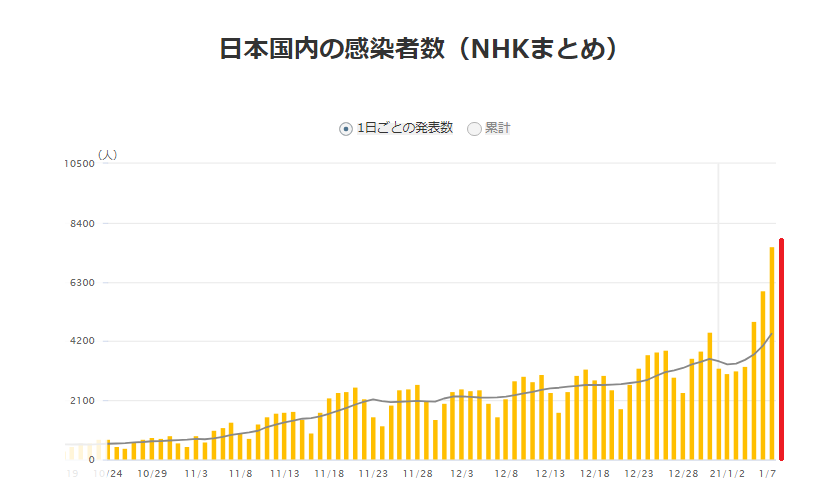 Even in Miyazaki Prefecture, which actually has the third highest number of newly infected people per 100,000 population in Japan,a prefecture-specific emergency declaration has been issued.

Prime Minister Suga said that “Aichi / Osaka is not in a state of emergency yet”,

but it seems that Osaka / Kyoto / Hyogo are also making final adjustments to request the government to declare a state of emergency.

As a result of the meeting, it seems that Osaka, Kyoto, and Hyogo prefectures have also decided to request the government to issue a state of emergency on the 9th.

And regarding the delivery service that you’re worried about …

Yamato Transport, Sagawa Express, and Japan Post will handle the delivery as usual!

The government said at a press conference that “schools do not request school closures!”, but…

in order to reduce contact between students, it is said that the number of students who go to school in a day will be reduced to two-thirds!

※* Tokyo is planning to request the last train to be advanced, but there is no noticeable movement yet …

It seems that some restaurants decide to close the restaurant because they think that it is impossible to attract customers until 8 pm when requesting shortening of business hours.

I feel like “lunch drinking” is about to start …

but Aeon has doubled some inventory and opened the warehouse saying “Inventory is enough!” … lol 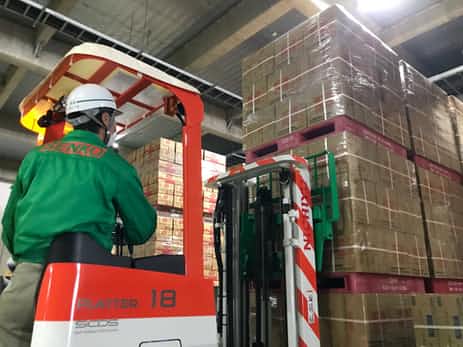 There will be nothing to eat seriously! !! !! Lol

(Nightmare is resurrected in my head … lol)

It seems like a temporary reaction, and on the contrary, I don’t hear any other serious side effects … Is this good news, right…?

(Am I too optimistic? Lol)

It seems that Moderna’s vaccine will arrive in Japan after May!

That’s all for today’s summary!

Until a few days ago, I was worried about whether the number would exceed 1,000, but now the number has increased by nearly 5,000 …

The idea is too crazy (lol)

But when we’re at home, we’ll naturally reach for sweets, so it’s important to devise something like this! Lol