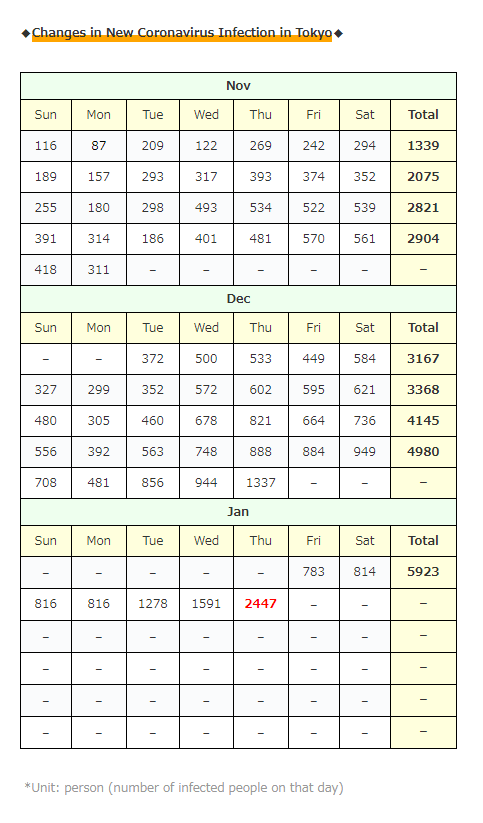 The number of newly infected people in Tokyo has come out huge number, so I felt that I was pushed into hell …

There are two more days this week …

What will happen tomorrow and the day after tomorrow …! (cry)

・Infection at a dinner with friends and acquaintances [85] people

・Infection in the facility [67] people

(Confirming whether it is a mutant species)

* Checking whether it is a mutant species

* Two people who have had close contact with the United Kingdom have also been infected.

→The point is, “The person was able to pass through the quarantine at the airport (negatively) and return to Tokyo normally. + There was contact with people (maybe his family). = The virus has already spread to Tokyo. “

* Bringing in samples from outside of Tokyo [61 cases]

・Private hospital in the prefecture

・Although it is the largest number ever

I could only confirm individual information such as above…

* Aichi seemed to be suppressing the increase until the other day, but today the infection exploded … 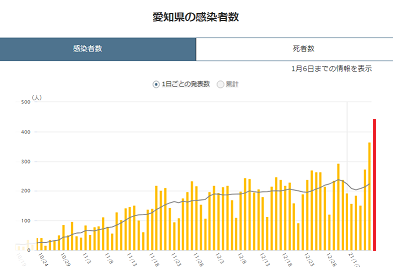 *Among the infected people counted today, there are [15] cluster relationships, including the above.. (Add up to 4 people)

*Among the infected people counted today, there are [3] cluster relationships, including the above.. (Add up to 1 people) 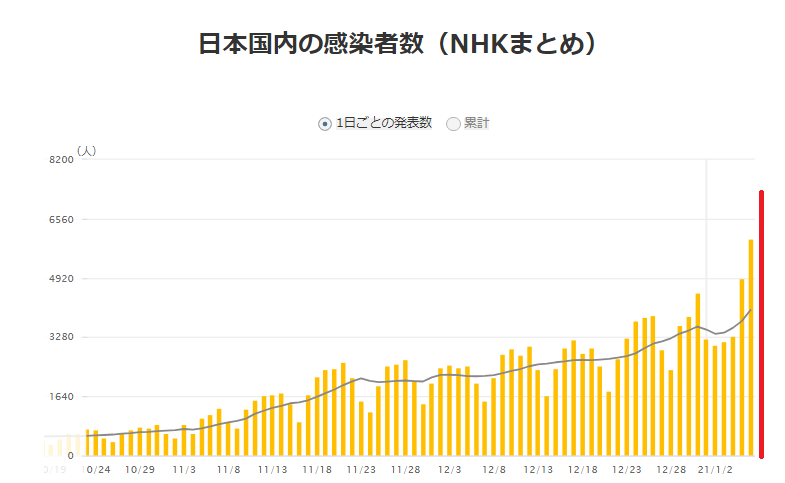 The state of emergency has finally been reissued …

In the end, it was announced only to 1 metropolitan area and 3 prefectures.

“Does this really stop the spread of the infection?”

②Request to shorten business hours to entertainment facilities such as restaurants, movie theaters, and sports clubs

* Delivery to home and takeout are OK

③Refrain from going out unnecessarily after 8 pm

④Limitation on the number of people in the event

*For universities, they plan to request effective combination with online classes.

⑥Employment adjustment subsidy continues to be up to 15,000 yen per day

* There is a usage record of 500 billion yen

* “The unemployment rate in Japan is 2.9%, which is the lowest level in the world.”

(Prime Minister Suga is proud of this)

⑨ “The number of infected people is suppressed in areas where requests for shortening business hours are made early.”

”Currently, the center of infection is 1 metropolitan area and 3 prefectures.”

⑩Amendments to the Special Measures Law should be made to be enforceable, such as penalties, as soon as possible.

⑪Vaccination is targeted for late February

⑫A subsidy of 4.5 million yen will be added per bed to hospitals that have increased the number of beds compatible with COVID-19.

⑬Half of the infected are young people in their 30s or younger. Even if you don’t get seriously ill, the infection will spread from there, so I would like to ask you to take action to protect your precious person’s life.

⑭Suga “I want to do something in a month rather than discussing the extension now.”

⑯Osaka and Aichi are not yet in a state of emergency.

“It’s difficult to achieve in a month, but if everyone works hard, it’s possible to go to stage 3.”

“The guideline for canceling the state of emergency in Tokyo is 500 infected people a day.”

The suspension deadline is extended from January 11th to February 7th

・Even though a state of emergency has been issued, 11 countries with preferential business traffic (exemption from quarantine, etc.) will continue for the time being, saying that the impact will be limited.

That’s all for the current breaking news …

The guideline for canceling the declaration is 500 people…, which is still too many, right ?!

And it seems that there is no compensation for those who are “already unemployed” or who have “decreased income” in terms of economic measures. ..

It seems that the fine for a restaurant violation is about several hundred thousand yen.

And another penalty is the publication of violated restaurant…

On the contrary, everyone may go to drink along the list of penalty restaurants… It’s such terrible situation like that…

Isn’t the government looking at the situation in Europe?

It was such information of emergency declaration recurrence order …

Now, let’s get back on track and go to the usual topic!

There was a surprising MBS news …!

Male “Why don’t you go to a super public bath?” 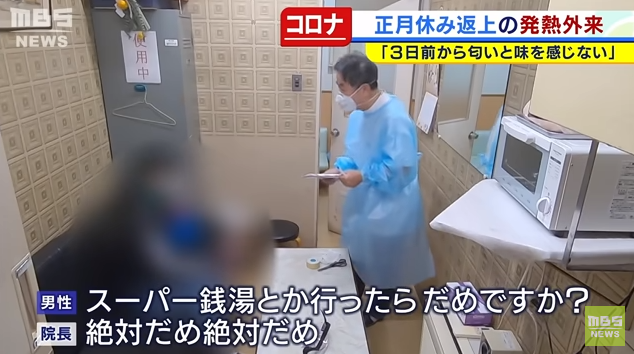 However, there are some great problems hidden in this video.

②He didn’t taste coffee in the morning, so he dared to go out to eat curry.

②He called the health center but was not introduced to a medical institution where he could be tested.

(Because he didn’t have high fever at that time)

This kind of risk increases as the number of home recuperators increases, so it’s very scary. .. .. ..

The Ministry of Health, Labor and Welfare has already requested mild and asymptomatic patients to receive medical treatment at accommodation or at home instead of being admitted to a hospital.

・There is no penalty even if you get out

・Home / accommodation medical treatment is only a “request”

Therefore, it seems that they are considering making penalties!

Even if they make penalties, it’s a difficult problem for people not to make them get out of their places …

By the way, the opposition party says, “It is strange to try to improve the infection prevention effect with penalties.”

Do such people carelessly go to drinking parties or go out to play?

And when the Minister of Land, Infrastructure, Transport and Tourism Akabane exchanged opinions with people in the tourism industry in Shizuoka…,

“If people don’t move, the whole area will be exhausted, so please be sure to restart GoTo Travel!”

They said they complained that way.

I’m sure there will be a restart of GoTo once the infection situation is over, and they’re very worried now …

I hope they don’t get impatient and restart early!

Because the infection situation is not over now!

And as for the topic of mutant species, after all it is being found more and more in Japan …!

In yesterday’s news, there were four reports of returnees from the United Kingdom, Nigeria, the UAE and South Africa.

And one of them, a woman in her 50s in Hyogo prefecture,

returned from the UAE and was negative in “airport quarantine”

and is receiving medical treatment at home.

It seems that mutants have already entered various regions, not just Tokyo and Kanto.

By the way, about this mutant

It is said that the analysis will be faster!

And the topic of the medical system is …

During the 1st and 2nd waves, it was impressive that people in the medical field were angry, saying, “Don’t use the word lightly “collapse of medical care! “,

But in this third wave, people in the medical field said that medical collapse was occurring …

“Now that we can’t provide or receive the medical care we need, it’s already collapsed.“

This is really an “emergency situation” …!

It is said that “When a member of parliament eats, keep it within four people,”

I understand that it’s impossible for a member of parliament not to meet people at all, but I think they will be able to refrain to do it for a month or two…!

The number of recuperators has increased by 4000 …

It’s doubled at a stretch, the largest increase ever …

The Oedo Line of the Tokyo subway has been thinned out until January 11 due to an outbreak of drivers, but it seems like this is the situation now …!

On the contrary, the infection is likely to spread, this is full …! 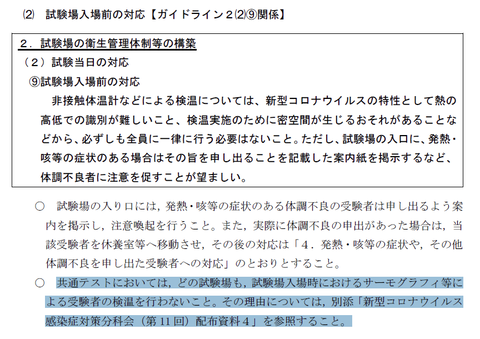 At all venues, it is said that “the students are supposed to come in good physical condition, so we will not measure the temperature etc at all so as not to upset” …

The university entrance exam is not only in the center exam, but there is also a secondary exam, so it seems that preventive measures are really important…