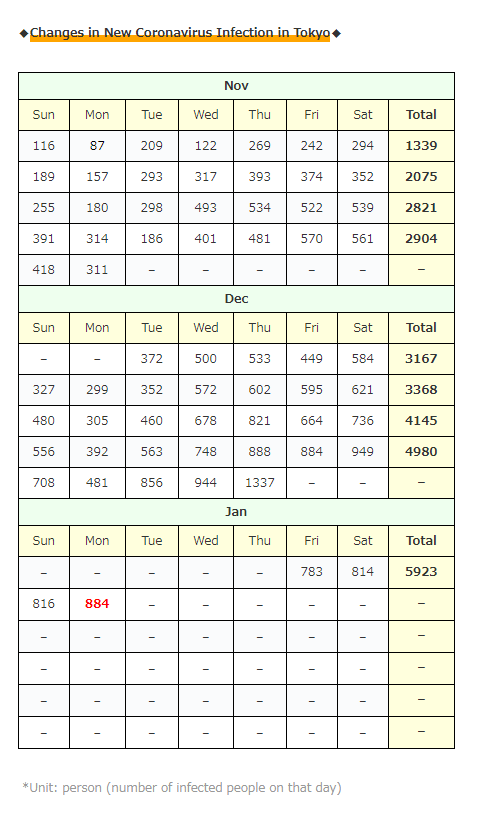 yesterday, I told you as follows,↓

The number of newly infected people in Tokyo has remained high …

It would be still OK if the temporary test office could handle infected people more than usual on Saturdays and Sundays even during the year-end and New Year holidays…, but

The flow of consecutive holidays across Saturdays and Sundays,

Sunday = less than Saturday as usual

However, since Sunday is almost the same as Saturday, I have a bad feeling…

It should decrease considerably on a normal Sunday …

“There is still hope if the numbers drop significantly on Monday …”

I had low expectations today, but the numbers that came out were … 800 people …

Maybe the New Year’s numbers will be reflected in a week or two, but the 800s are still a bit too abnormal …

* I thought that the details of the infection route of ↑ will come out today, but it seems that all major news sites are still during the Holiday period …

(* Addition → After all, it finally came out at midnight!)

・ Metropolitan high school in the 23 wards

* Bringing in samples from outside of Tokyo [47 cases]

・Dinner with more than 10 friends and acquaintances

・Fukuoka Prefectural Assembly members who played golf and had dinner together

*Among the infected people counted today, there are [13] cluster relationships, including the above.. (Add up to 6 people)

*It seems that there are several infected people in the cluster, such as (1) long-term care establishments in Hiroshima City, (2) those who had a year-end party, and (3) restaurants where karaoke is possible. 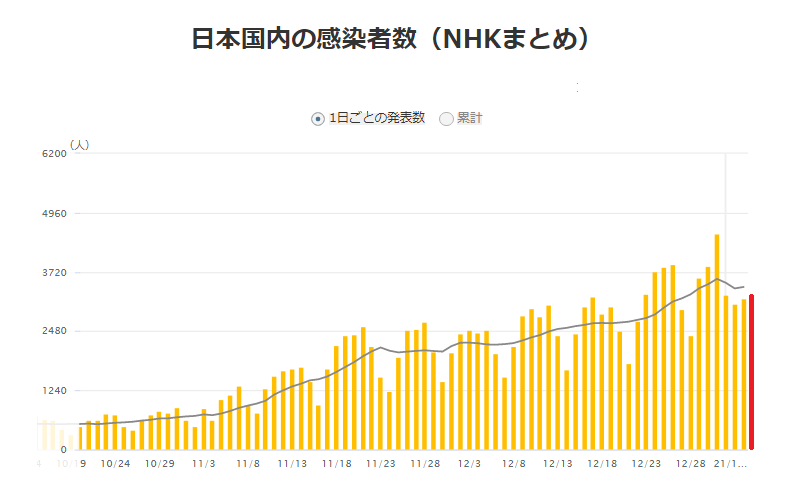 even though it’s a serious article, that made me laugh unintentionally like “What?! … are you kidding?”

Regarding the progress of vaccination in Japan, Prime Minister Suga provided a small amount of information!

「”Initially, clinical trial data from pharmaceutical companies was scheduled to be finalized in February.”

“The Japanese government has strongly requested the US headquarters to conclude this month.”

“After that, we will examine the safety and efficacy and start vaccination by the end of February.”

It’s an infection situation in Japan where we have no choice but to bet on this, so maybe a month and a half later … I can’t wait! lol

“First of all, I would like to start vaccination sequentially from medical staff, the elderly, and employees of facilities for the elderly. I will also take the initiative in vaccination.”

About the vaccine that everyone really has been waiting for ,

he has declared that

“”Everyone will be worried about the risk of the vaccine, so I’ll inoculate it first and check the safety! Rest assured, Wahahahahaha!”,

However, for someone like me who really wants to get vaccinated so much, it feel like “No! You can be the last! The people are first! Angry” ..

… You think this article is a joke, right?

He is really saying it!!! 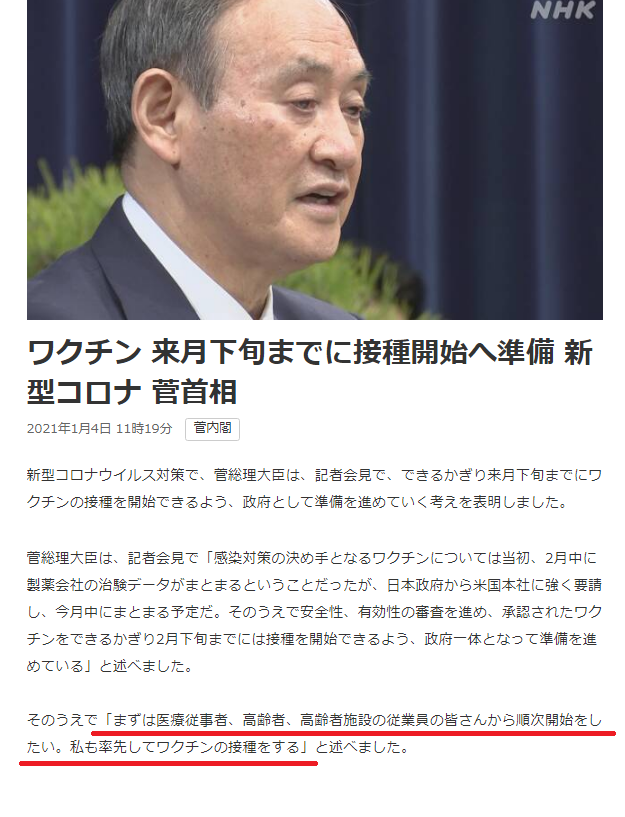 By the way, today January 4th is the day when Prime Minister Suga said “I want to have a meeting!”, But the New Year’s press conference was held in the morning!

As you all know, it will show the measures against the new coronavirus infection and the government’s way of thinking for a while, so I would like to summarize firmly and easily（←important!lol)!

(About the state of emergency)

①The number of people in Tokyo and the neighboring prefectures did not decrease even at the end of the year.

②Experts say that the cause of unknown infection route is mostly dinner.

③Therefore, I requested Governors of 1 metropolitan area and 3 prefectures to change “shortening of business hours” from 22:00 to 20:00.

④Anyway, take measures to reduce the risk of infection of dinner.

⑤Results have been obtained for prefectures such as Hokkaido and Osaka that have requested shortening of business hours.

⑥About half of the number of infected people in Japan is in 1 metropolitan area and 3 prefectures.

⑦I would like to issue a state of emergency in consideration of effective measures for dinner.

⑧ After learning for about a year, it has become clear which place is the problem infectiously.

⑨So I think it is effective to take pinpoint measures.

⑪In principle, foreigners will be refused new entry and immigration restrictions will be strengthened.

⑫Special treatment 11 countries will also be suspended if a mutant is found in the partner country.

⑬It is difficult to restart when it becomes a state of emergency.

⑭I will do it as a proof that human beings have won the virus. I’m preparing.

At the recent meeting between the governors of 1 metropolitan area and 3 prefectures and Minister Nishimura,

Minister Nishimura “I will be considering an emergency declaration”

(Isn’t the state of emergency even in sight until now …)

When listening to Prime Minister Suga’s press conference, it sounds like the following.

・All I have to do is take measures at Dinner = Restaurants

・I will declare a light emergency of “eating and drinking + α”

↑I have a very bad feeling…

⑤Results have been obtained for prefectures such as Hokkaido and Osaka that have requested shortening of business hours.

↑He seems to be aiming for this, but not only Osaka and Hokkaido, but also Tokyo, Saitama, Chiba, and Kanagawa have requested shortening of business hours, and that has failed. .. .. ..

I’d like them to realize that it’s just torment for restaurants, and the number of infected people will not decrease at all, and that the request to shorten business hours is no longer effective….

The governor often says that he only follows the request for shortening business hours by about 20%, but it’s really strange to request with a cooperation fee that doesn’t even pay for the monthly payment!

We can’t blame the restaurant … if they follow the rule, they going to collapse …

And for those who are interested in this “summary article” and read it, I think that infection prevention measures are perfect, but unfortunately when we look inside the city … 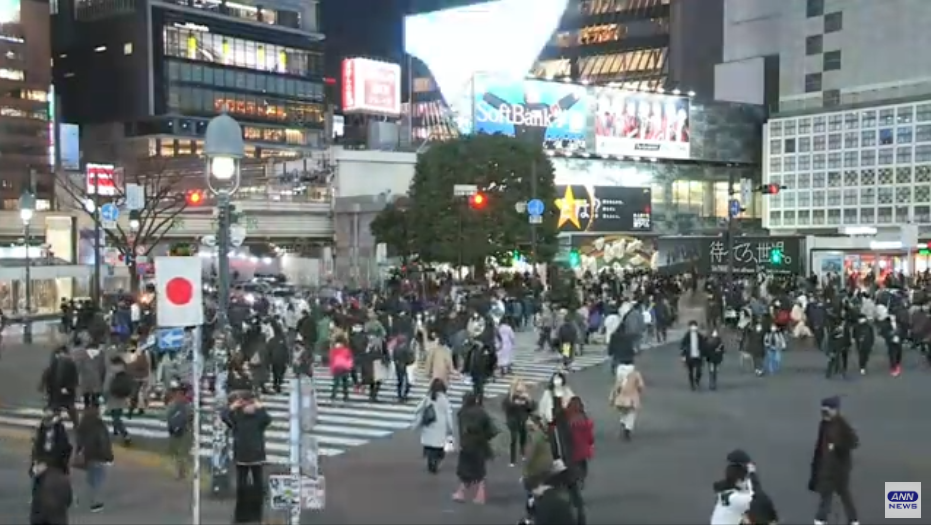 (* There are so many people at the scrambled intersection in Shibuya, Tokyo, even around 17:00 on January 4, when the state of emergency is a hot topic …)

The answer of a certain number of people is, “COVID-19 is nooooooooooooo problem!”

Like Germany, which took loose measures in Europe and failed in Europe,

I hope this measure doesn’t fail …

However, from the perspective of Prime Minister Suga this time, it is likely that “announcement will be made only to pinpoints” and that it will be a “loose state of emergency”,

(for example, the type of business will be only the suspension of business of restaurants)

I have only such a bad expection…

I hope it will be an effective measure somehow. .. ..

Finally, I would like to summarize the subsequent remarks made by the governors of some prefectures on the topic of this “state of emergency”!

“Osaka has not spread rapidly, so we are not requesting a state of emergency at this stage.”

(* In fact, Osaka has considerably suppressed the spread of infection) 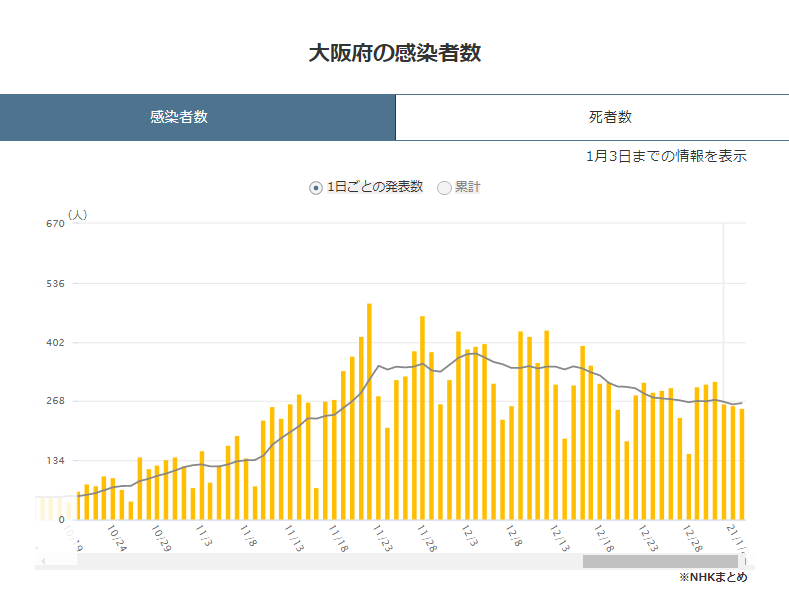 (** It seems to be decreasing or the same level.)

“I want the government to declare a state of emergency as soon as possible.”

“The points are speed and effectiveness.”

“There are procedures for each of the four regions, so we plan to respond quickly.”

“In addition to requesting shortening of business hours, we plan to do public transportation hours, telework, and staggered commuting.”

It’s about time to get solid!

The governor couldn’t do it anymore, so the government! Please wake up! (cry)

It’s just a rumor, so I’d like you to listen to it lightly, but it is said that the announcement of the state of emergency is being considered from Saturday, January 9th to about a month.

Today too, the number has increased by more than 1000 …

I’m sorry if it becomes a boring “summary article” for two consecutive days …!

We all want to get rid of the new coronavirus (COVID-19) and have a fun topic!