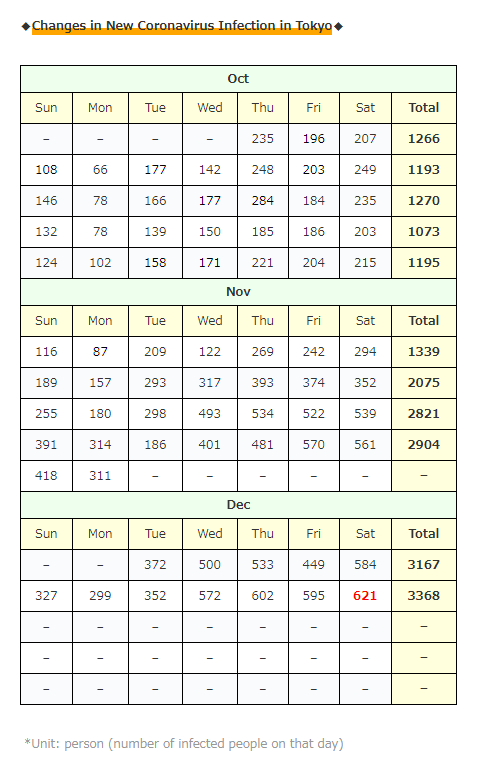 そAnd today is Saturday, so I put out the total for the week of the usual calendar, but 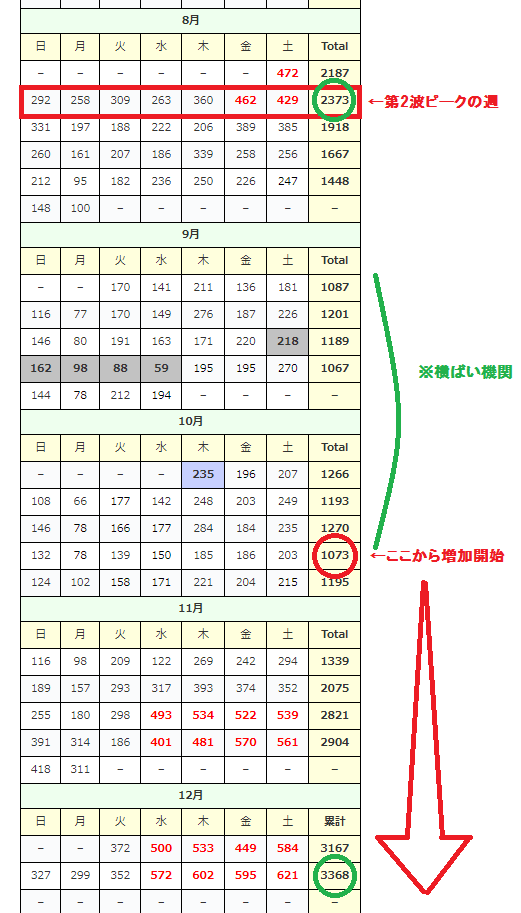 Governor Koike may think, “There is no problem because the number of people aged 65 and over has decreased considerably,” but

Considering “infectious diseases” (diseases that are transmitted from person to person), there is no help for it unless the total number is reduced. .. ..

・Infection in the facility [60] people

(*In summary, Governor Koike said, “Because of the large number of tests, the number of infected people is only increasing. It is more important to take measures against the infection of the elderly who are becoming more severe.”)

Hmmm, after all, she seems to think that “it doesn’t matter if the number of newly infected people increases” …

*Among the infected people counted today, there are [4] cluster relationships, including the above.

* Event participants and those who ate and drank here from December 4th to 9th are calling for an test on suspicion of rich contact.

*Regarding the special elderly nursing home “Dream House” in Sapporo City and “Inaho Elementary School” in Otaru City, it seems that the clusters have ended.

・Nosocomial infection at a hospital in Shizukuishi-cho [41] person(s) 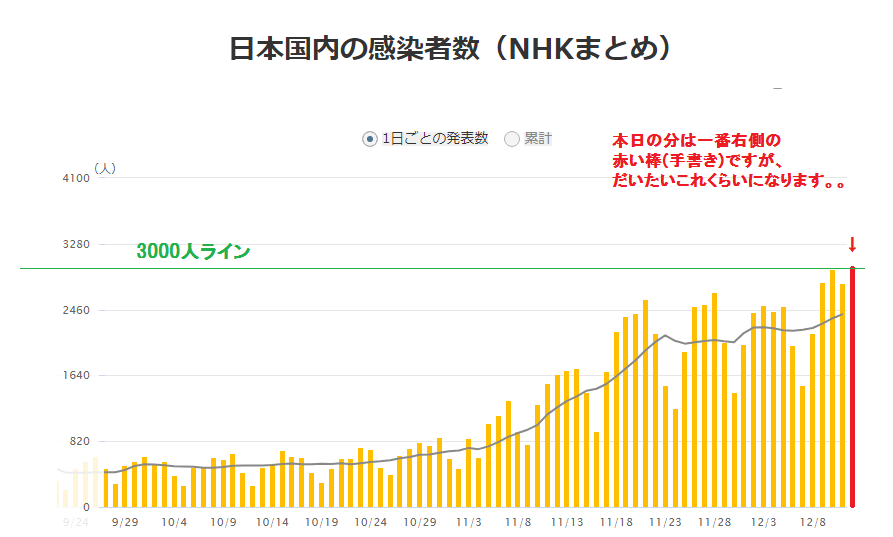 Recently, hopeful “vaccination information” is coming in every day thanks to Pfizer’s vaccine!

It seems that the quarantine period for infection with the new coronavirus (COVID-19) has been shortened from 14 days to 10 days in the UK following the US …, but…

there is a vaccine in the UK, so we don’t have to worry about it,right?! Lol

I would get angry if Japan shortened the quarantine period …! Lol

Although it is such a “COVID-19 vaccine”, in fact, there is also the following information.

Vaccine under development by an Australian company

“Although it has a vaccine effect, it will be discontinued because the AIDS test will give a false positive reaction!”

( Vaccine developed by CSL and the University of Queensland)

Vaccines under development by French and British companies

“Development will be delayed because it will not be effective enough for the elderly!”

As mentioned above, there seem to be many vaccines that are postponed or discontinued …

We’re really, really, really(x100 lol) happy that the vaccines from Pfizer and AstraZeneca, which were at the forefront of the development competition, are proceeding smoothly!

By the way, when it comes to vaccine information in Japan …

A subcommittee on measures against the new coronavirus (COVID-19) has given specific priorities for vaccination!

I wonder if vaccination will start soon …

I’m excited about the expectations!

On a different note, yesterday there were some topics about the “Go To (Travel) Campaign”, so let me introduce them briefly!

The campaign will be suspended in some areas of Hokkaido and Osaka from November 24th to December 15th, but it seems that it will be extended, and it will be decided by holding a meeting on December 14th next Monday!

It seems that the reason is “because the medical care provision system does not improve” ..

Regarding that, Prime Minister Suga appeared on an internet program yesterday and expressed various thoughts about this “Go To (Travel) campaign” as follows.

“I’m not thinking about suspending the campaign nationwide.”

“But the subcommittee’s recommendations tell us to take appropriate measures in areas with high levels of infection.”

“The subcommittee once said that the risk of infection on the move was low.”

“If the economy deteriorates, we cannot keep our lives such as employment.”

“We are taking measures by listening to experts about the unemployment rate and countermeasures / effects during the recession such as the past Asian currency crisis.”

“Unknowingly, “Go To (Travel) campaign” has become bad, but I have received a suggestion that it will not be infected by moving.”

“The subcommittee previously said that moving would not infect!”

It seems that the government’s subcommittees, including Professor Omi, who has been working hard recently, have been transferred responsibility by the Prime Minister because of the words of the past …

However…, it is good to understand the idea of ​​Prime Minister Suga (government) in this way!

By the way … We Japanese people and Mr. Omi do not say that the “Go To (Travel) campaign” is bad! Your(PM) timing is bad!

I’ve always thought that the “Go To Travel Campaign” should be immediately understood by an expert’s analysis, but

The Scottish Government of the United Kingdom has finally announced that “the infection has spread on travel”!

①Based on the report for the expert meeting in the UK

②It was found that the first and second waves of the new coronavirus (COVID-19) were completely different strains.

③In Scotland, the first wave ended in July, but viruses from other European countries and Asian countries entered Scotland during the summer trip from July to August.

④ Scientists concluded that they were “brought in on a trip”

“There is no evidence that this campaign is the cause of the spread of the infection,”

but the scientific basis has finally come out (overseas)!

I hope this will change the direction of Japan’s measures …

Asahikawa City seems to be unable to give birth at two of the five core hospitals, and Asahikawa Red Cross Hospital Director Kenichi Makino said as follows.

“I just felt like the (medical) collapse had just begun.”

Finally, the word “medical collapse” has begun to appear from people in the medical field …

(* People in the medical industry have always said that “medical collapse” should not be used easily!)

in Kanagawa, a man in his 50s died at a new coronavirus (COVID-19) infectious disease accommodation facility …

I’m waiting for details, but there was no response to the LINE health observation at 15:00, and when the person in charge visited the room before 20:00, he was lying on the bed …

“Medical collapse” is a little getting scary …

Really, let’s be careful until the vaccine arrives and the end of COVID-19 is visible …!

The number of newly infected people nationwide has exceeded 3,000,

Yesterday, the government’s subcommittee on measures against the new coronavirus (COVID-19) finally made a proposal!

Details are listed in the URL above, but it’s super long, so if you summarize only the important points …

→Don’t let your guard down!

Also, the government’s reaction was … Well, as usual, “We will respond firmly with a sense of crisis!”,

but there was one person whose remarks I was worried …

“In a situation where the rapid increase in the number of infected people has been avoided, but it is difficult to reduce it ~~~”

You say it after the infection surges …!?? (Angry)

Don’t not you think so?!

Or is the number of domestically infected people renewing the highest ever, but is it still in a state of “not increasing at all?” for him?..