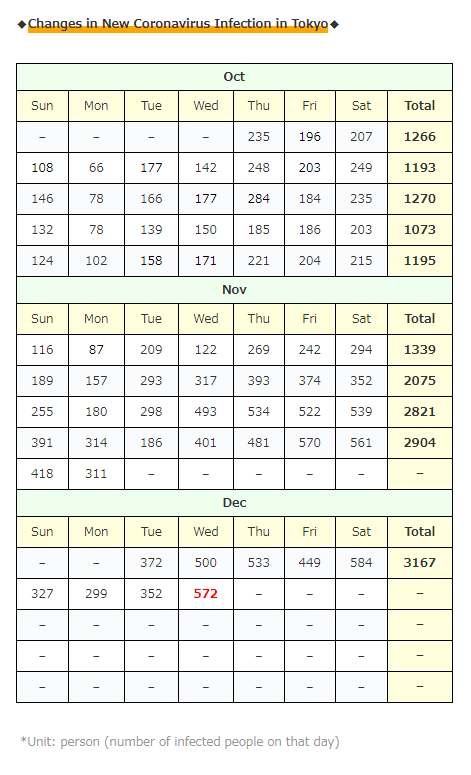 The number of new infections in Tokyo is…

Yesterday, I told you, “This week has been less than last week,” but today it’s a number close to the highest ever (even though it’s Wednesday)… 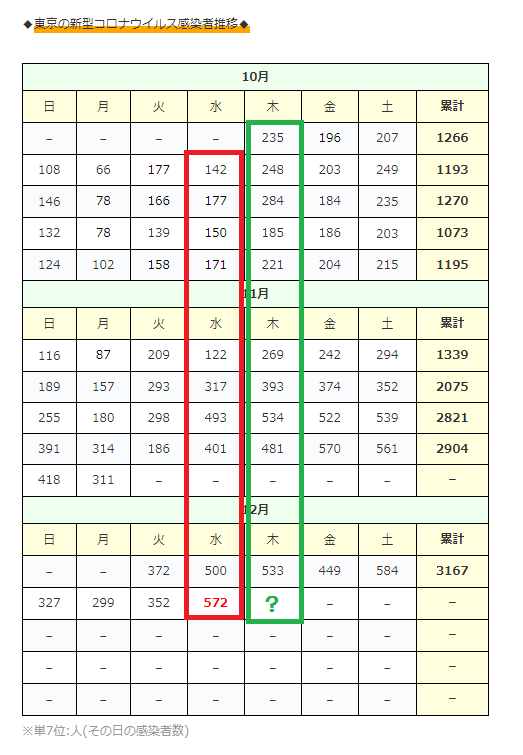 ・Infection in the facility [72] people

*Infection in the facility [72] people

It was said that … but there was also such information.

(* The following information may be included in tomorrow’s total.)

*Two mothers of the students

* Summary of outbreaks related to the “entertainment district at night in Susukino, Sapporo City [1 stores, 1 person(s)]

*Currently, a total of [13] clusters including the above are occurring in Hokkaido …

In Japan, it seems that preschool boys are becoming more severe with the new coronavirus (COVID-19) in Osaka. ..

There were some serious illnesses in their twenties even during the first wave, but it is the first time in Japan that preschoolers have become ill?

I searched a lot, but I couldn’t find any more information because of his age.

What is the status of having a chronic disease and what kind of infection route it is? I think that those who have children will be particularly worried, but first of all, I want him to recover safely …

Every day when I summarize the details for each prefecture in the pink column of ↑, it actually occurs in a considerable number of schools a day including those not listed in the outbreak information (infection of 1 or 2 people).

The most talked about recently is the infection in “chorus”.

In this “Summary Article”, I posted it in the outbreak information twice.

*It is possible that the infection has spread in the chorus contest.

Meanwhile, the Ministry of Education, Culture, Sports, Science and Technology has issued an urgent notice calling for infection control during chorus at school.

he contents are as follows.

②Leave a space of 2m

③Do not create a situation where there are both standing and sitting students (to prevent droplet infection).

④Make the practice time as short as possible

⑦Be careful when playing musical instruments that use your mouth, and consider refraining from playing them.

It’s difficult to judge just this. ..

There was also the topic of “Preschoolers in Osaka became seriously ill”, in order to save their lives, they should definitely say, “Stop chorusing now,” but we can’t say, “This situation will definitely end by the month of the month.”

What children want to do, such as students and children, and what they should study and experience in their long-lasting life, I feel that the balance between them is very difficult …

I think parents, teachers, and government officials are really worried about this area, but what should we do?

So I really want to resolve this new coronavirus (COVID-19) as soon as possible.

… The story is getting a little strange, so change the story… lol

In Hokkaido, where the infection situation does not improve easily, it seems that the period of measures such as requesting self-restraint will be extended.

All areas of Sapporo City: Request for restaurant closure with entertainment

Susukino area: Shortening the time for serving alcoholic beverages (until 22:00)

↑ It seems that the current period such as this request for shortening business hours will be extended from December 11th to December 25th.

In addition, even in Asahikawa City, where large-scale nosocomial infections are occurring frequently, it is also considering pulling it up to the same “Stage 4” as Sapporo City and requesting refrain from moving.

By the way … Susukino was requested to shorten the business hours by 10 pm with a cooperation fee of 200,000 yen from November 7th to November 27th …

But Susukino infections have been increasing over the past month …

Currently, the transition of the infection situation in Hokkaido is like this … 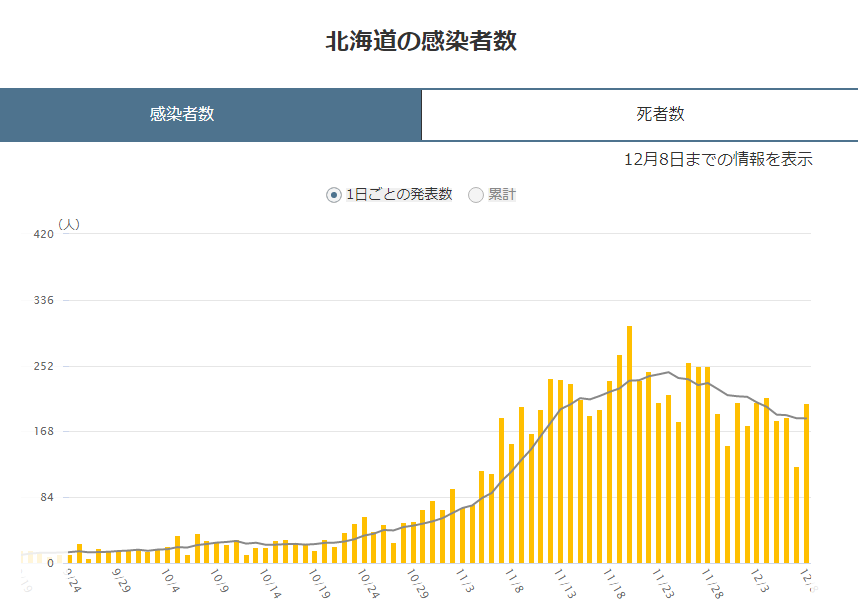 Hmmm, it seems like … it’s decreasing or it’s not decreasing so much …?

In the previous “Summary article (December 3rd)“, I tried to summarize whether the request for leave of absence in Japan is effective or not from “Changes in the number of infected people due to lockdown in Europe”, but in the same way ↑ If I draw a line on the bar graph of … 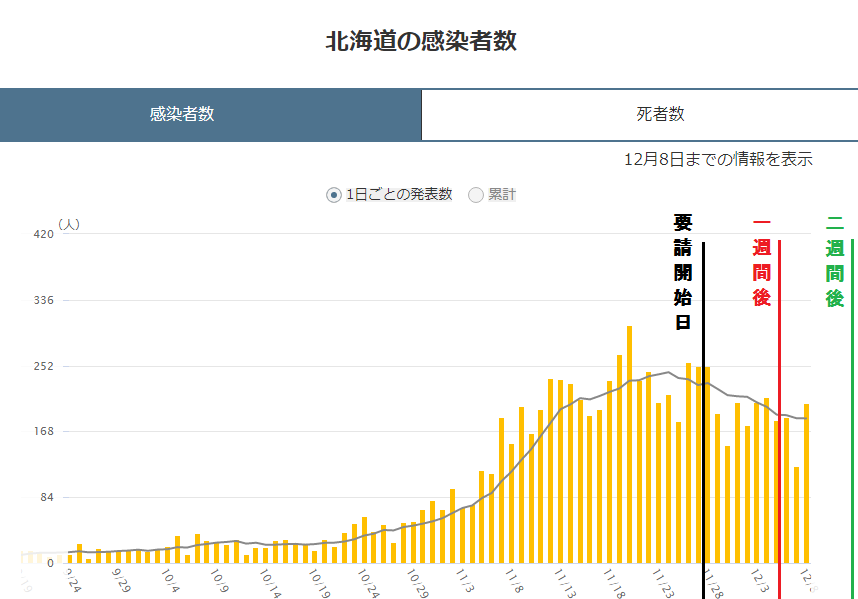 In European lockdown, the tendency was as follows …

“Peak comes within a week from the start”

“From the 1st week to the 2nd week, it starts to decrease gradually”

“It finally decreases in the 2nd to 3rd weeks”

There are many large-scale outbreaks in Hokkaido, so it cannot be said that the situation is the same, but in any case, the effect will be weak unless it is 3 weeks instead of 2 weeks …

What’s more, it’s just a looser request for leave than the lockdown in Europe. .. .. !!

I’m also interested in other areas that are taking measures such as requesting leave.

I will summarize it next time!

First and foremost, I hope the number of domestically infected people will start to decrease. .. ..

Recently, the topic of vaccines for the new coronavirus infection (COVID-19) is full of Pfizer vaccines, which have been approved for the first time in the UK and have been vaccinated.

The vaccine under development by Oxford University and AstraZeneca in the United Kingdom has also published the final clinical trial results in the world’s first academic journal!

・(Twice inoculation) Effectiveness is 62% when both are properly inoculated.

・Effectiveness is 90% when the inoculation amount is halved only for the first time.

“Why is the effect so great if you halve the amount ?!”

とI tried to find out, but even among the experts, the answer has not yet come out, and everyone seems to be waiting for the announcement of AstraZeneca!

(It seems that there was a hypothesis that the smaller the amount, the higher the immune effect.)

In any case, for Japan, this AstraZeneca vaccine seems to arrive earlier than Pfizer’s vaccine (first for 15 million people from January to March), so I hope that the development will proceed smoothly!