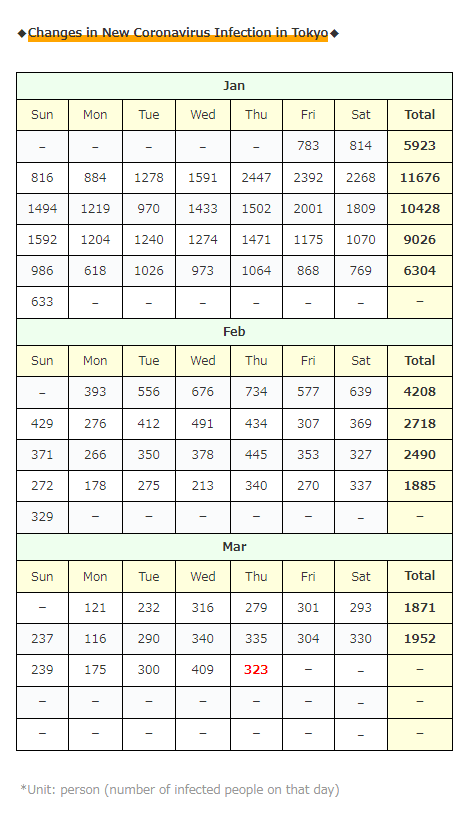 The number of new infections in Tokyo is only slightly lower than on the same day of the week last week …!

However, the number of people who have decreased from last week is really small … 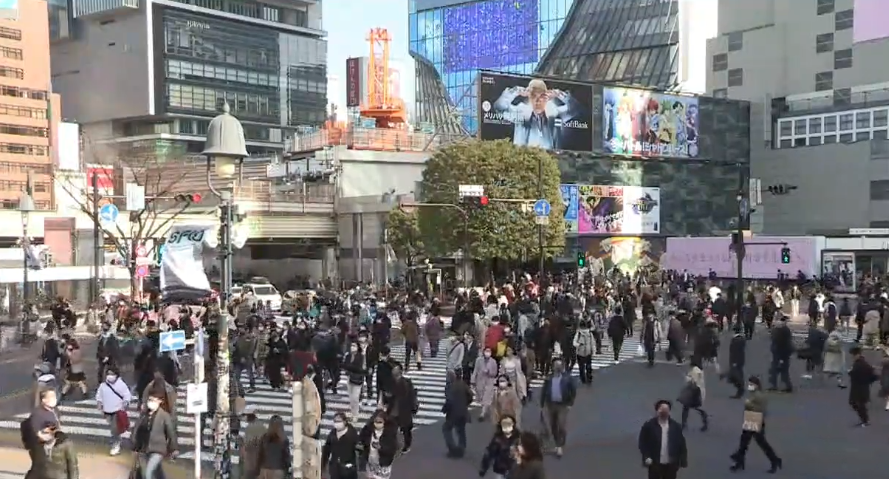 ・Today, I was able to confirm only the information of 6 people infected with the mutant species. 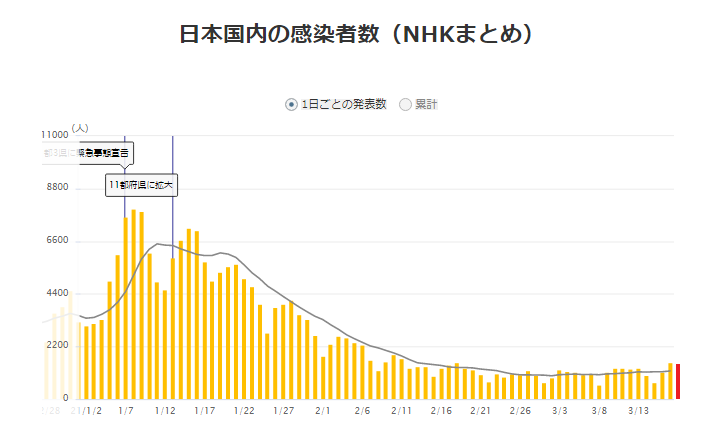 It has been talked about for the past few days that Japanese government should re-extend the state of emergency in the four Kanto regions (Tokyo, Kanagawa, Chiba, Saitama) or not … but Prime Minister Suga has announced that it will be lifted in the end…!

It seems that the state of emergency will be lifted on March 21st as scheduled!

By the way, the reason for the cancellation seems to be that “the number of infected people and the bed usage rate are in the direction of cancellation”.

The recent infection status in the four Kanto regions is … ↓ 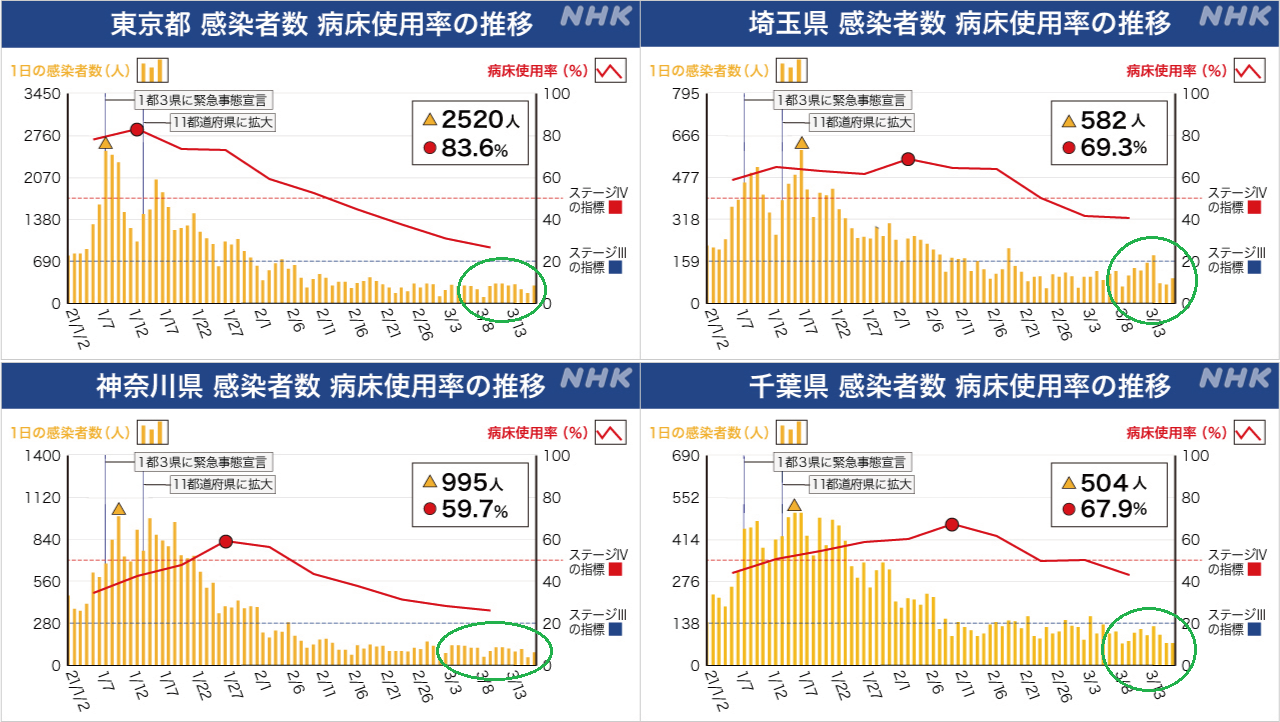 ↑ The red line (bed usage rate) in the graph is steadily decreasing, but all four regions have not even reached stage 3 …

And the bar graph (number of infected people per day) seems to keep at a low level only in Kanagawa, but it seems that Saitama is on an increasing trend, and Chiba is “high” rather than “down”, isn’t it? It’s still near the stage 3 line …

Looking at the graph in recent Tokyo, the number of infected people seems to be small, but

↑ Looking at the usual calendar like this, it has been increasing for more than a week and more than the same day of previous week, and yesterday 17th returned to the shocking number of 400 people …

They have to release it someday, but when I look only at the infection status, I wonder if it is now …?

By the way, some government experts say that the rebound has already begun not only in the Kanto region but also in the Kansai region.

Well … it’s an extension of the state of emergency without any additional measures, so it’s difficult because it seems meaningless to continue the declaration.

There is no problem if they take additional measures firmly! (dry laugh)

Tokyo “How to prevent rebound is important”

Chiba “The medical system is improving, so that’s an appropriate decision.”

Kanagawa “I thought it was okay to release Kanagawa.”

Saitama “Sorry because we haven’t reached the standard for cancellation.”

Only Governor Ohno of Saitama feels a sense of crisis …!

Also, as a future flow,

As you can see in the article above, it seems that most areas, including Tokyo, will continue to request restaurants to shorten their business hours by 9 pm during March this month!

oday, I summarized the cancellation of the state of emergency in the four Kanto regions!

I can only see “re-expansion without waiting for the release” … but we have no choice but to hope that the infection situation will improve …!

By the way, the current domestic infection status of mutants seems to be like this …! ↓ 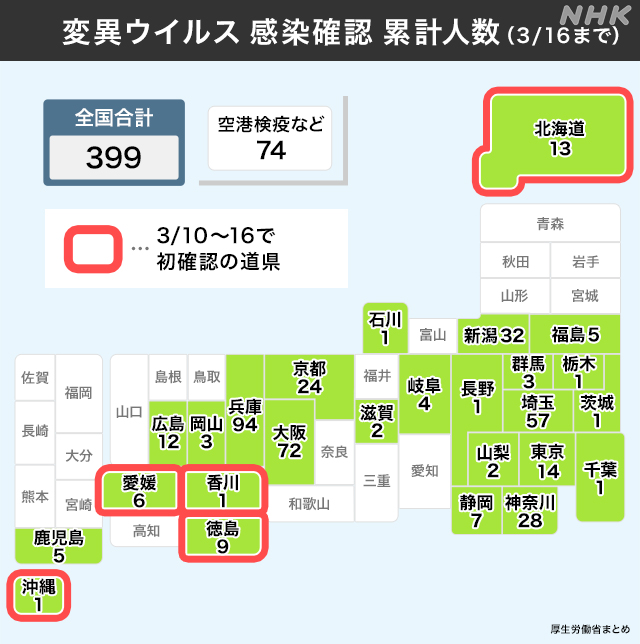 (*Number of mutant-infected persons in each prefecture)

And in Tokyo, a woman in her thirties has died from the new coronavirus (COVID-19) …

(It is unknown whether or not there is an underlying disease) 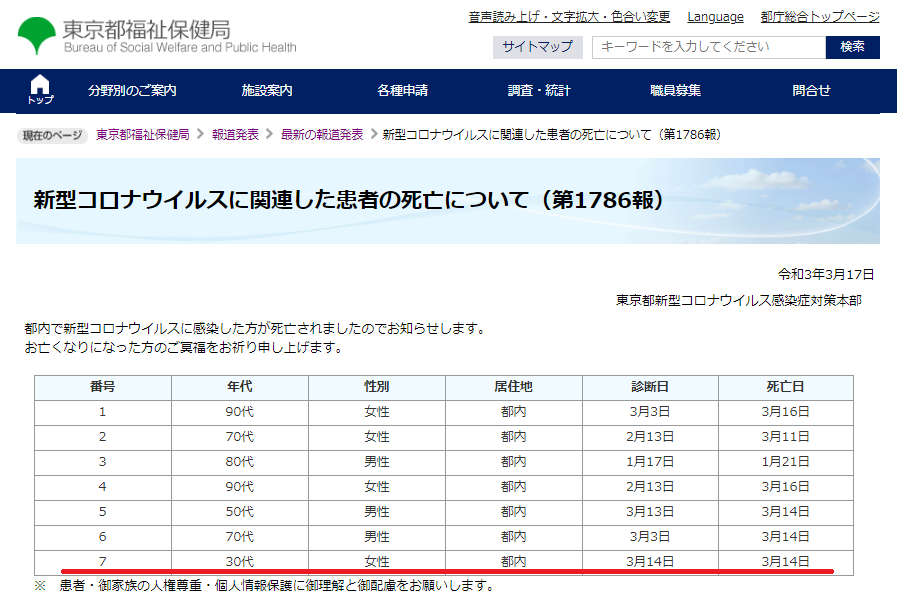 Even though vaccination has begun, it is still a long way from being widely spread throughout Japan …