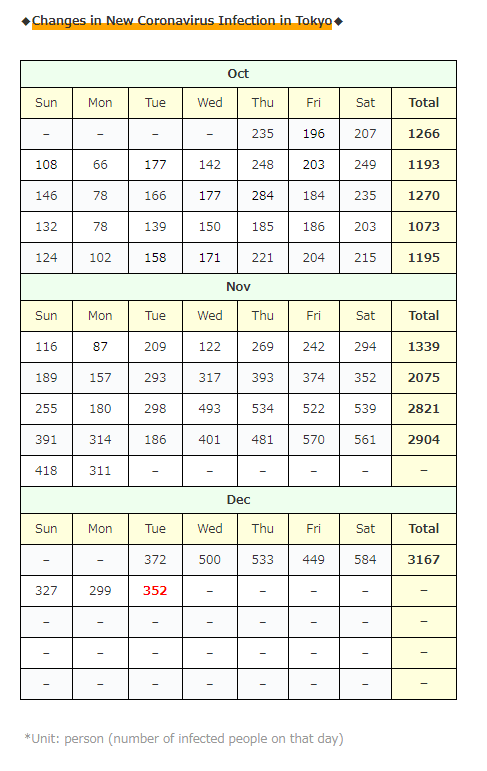 The number of new infections in Tokyo has been lower this week than last week so far! 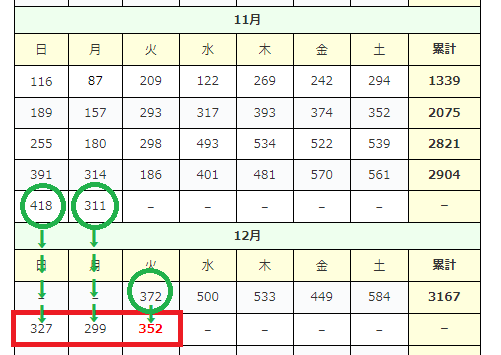 However, yesterday and today are the same numbers as last week’s day of the week, so we can’t let my guard down …

・ Infection at Yokota Air Base [7] person(s)

Adjusting for “hospitalization or hotel or home treatment” ： 561 ( -7)

*Currently, a total of 15 clusters including the above are occurring in Hokkaido … 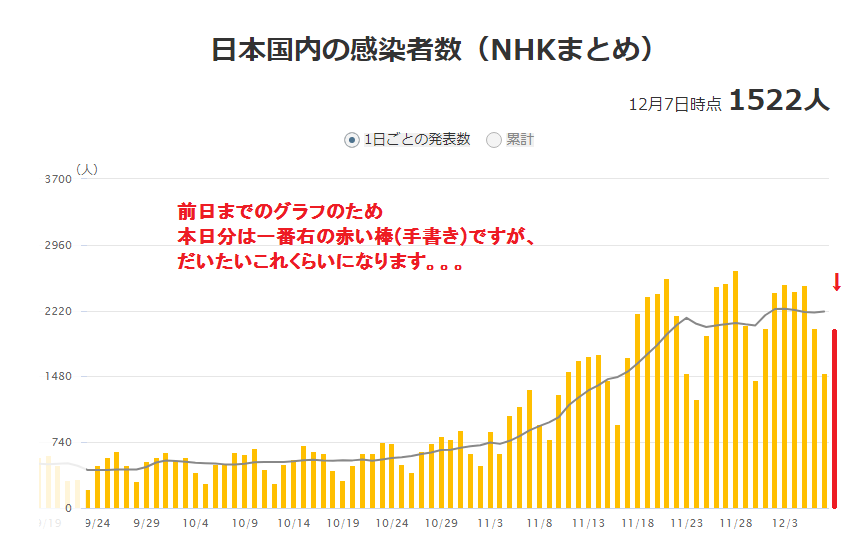 This was the first thing I noticed today!

In France, where restrictions on going out continue due to the spread of the new coronavirus (COVID-19) infection, French government were gradually trying to ease the business, such as reopening stores, but recently the number of infected people has not decreased well, so according to the French government’s announcement, it is quite difficult to relax the restrictions on going out scheduled for mid-December …

Speaking of France, I summarized the graph of the number of newly infected people in France in the summary article the other day, but ↓

(From the summary article on December 3rd)

No going out for more than 1 hour (with fine) * Schools, factories and farms will not be closed. 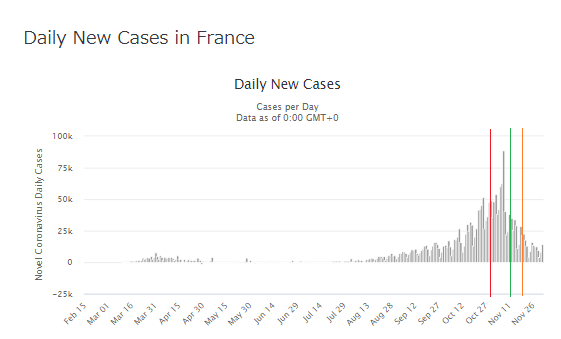 After all, France has been increasing for the first week and is gradually decreasing from there!

↑The infection should have decreased with such a considerable momentum …

I thought, “Is France spreading again since then ?!”, so I checked the latest graph of the number of newly infected people! 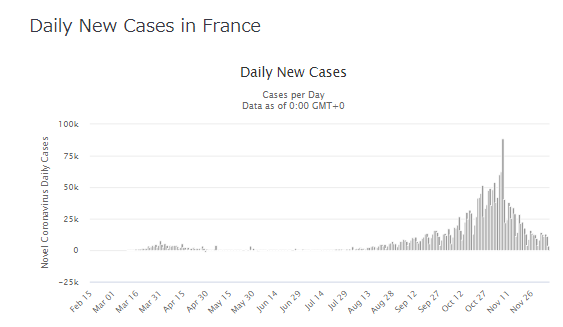 However, if you take a closer look, it seems that the decrease has stopped for the last week or so …!

By the way, in the bar graph above, it looks like that the number of infected people has been low for the past week, but in reality, there are still about 10,000 infected people. .. 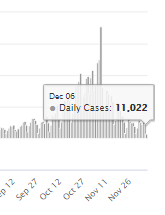 Originally, the peak of the mountain in the graph was about 50,000 to 80,000, so we have the impression that it has decreased considerably, but the French government is still alert (although the number of people is large). Hmm!

Even though the number of infected people is not decreasing. .. .. (Mumble

…… Oops, the voice of my heart leaked! lol

According to research teams such as the University of Tokyo, comparing “Go To (Travel) Campaign” users and non-users, it was said that the number of those who have experienced the symptoms of the new coronavirus (COVID-19) and complained of dysgeusia, were twice as may statistically compared to non-user.

Looking at the reactions of Internet users, it seems that everyone in this article was worried that “See, the number of infected people is increasing because of the campaign!”,

but to be honest, I felt that “this is not an article that the number of infections increased in the campaign, but just article that many campaign users felt symptoms…”

And since the research is “statistically”, it is unclear “what data is being collected on the premise”, so I can’t say anything … but

in the first place, “infection using a campaign” has a strong image of

(1) people who have symptoms during travel and go to the hospital, and

(2) outbreaks that occur during group trips and are counted,

so I think, “That’s why they go to the hospital because they have symptoms, so it’s natural that the number of symptom holders doubles compared to the overall status of infected people (including many asymptomatic) …”

Then what is the meaning of this research …

Of course, while saying that, I think the “Go To (Travel) Campaign” is one of the factors behind the spread of the infection…!

In this way … I always start by thinking “Let’s introduce it quickly and easily!”, But the introduction of the first article will be quite long as shown in ↑ …

So, I will summarize from next articles that I was interested in “as easy as possible!”! lol

(As you all know)

The Toyosu market in Tokyo has been infected by a total of 160 people since August, but the Tokyo Metropolitan Government continues to announce that it is not a cluster.

we can only think that “there are too many infections, isn’t it a cluster ?!”,

but “cluster (outbreak)” seems to be “transmitting viruses within the same group” in the first place,

like Toyosu Market, it is said that “the infection of 5 or more people has never been confirmed at one time, and it takes more than 2 weeks until the next infection is confirmed” is not a “mass infection” …

“Outbreak” = It is safer to know the infection route …

Well, the text is still long! Let’s make it easier!

At the “Hokkaido Medical Center,” where clusters occurred in Hokkaido, a survey result was found that “a patient who was negative on admission was actually infected, and clusters were generated from there.”

The same was true for nosocomial infections in hospitals that had occurred in the past in Kanagawa, and
also Infections may be confirmed a few days after a negative airport quarantine,

A Filipino worker who was in the quarantine period for the new coronavirus (COVID-19) went out of the room without permission for “only 8 seconds” and was fined 360,000 yen!

In Taiwan, it seems that 14 days of isolation is still required for entry and return from overseas, and it seems that there have been 19 fines for going out without permission in Kaohsiung City alone.

That’s all the articles I would like to introduce today!

Thank you for always reading!

Let’s share the information as much as possible and get rid of this new coronavirus infection (COVID-19) as soon as possible!

Due to the large number of discharges (more than 2000), the number of people undergoing treatment nationwide has decreased today!

→ After that, the number of newly infected people increased significantly, and the day ended with an increase. .. .. (-74 people → +35 people)

Today, I would like to introduce “What I laughed while looking for articles related to the new coronavirus (COVID-19)” for the first time in a while !

Recently, “package fraud” such as sandwiches and food has become a hot topic, but the word “Seven-Eleven Respect” made me laugh unintentionally! lol

I’m surprised at your naming sense every time … lol

Not only in Japan but also overseas, some companies are doing similar things and I laughed at the pictures, so I will introduce it! lol 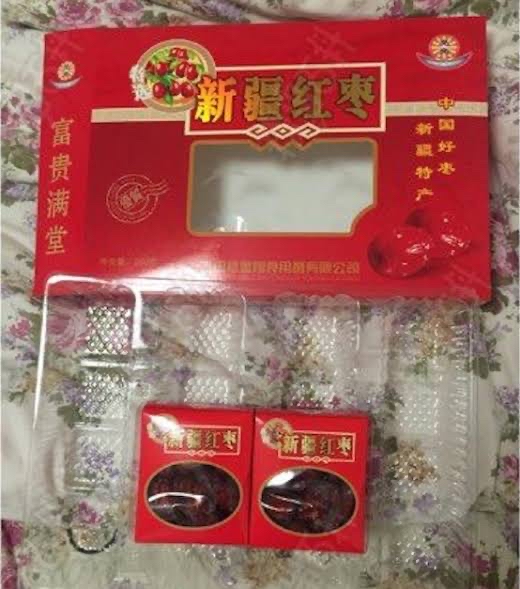 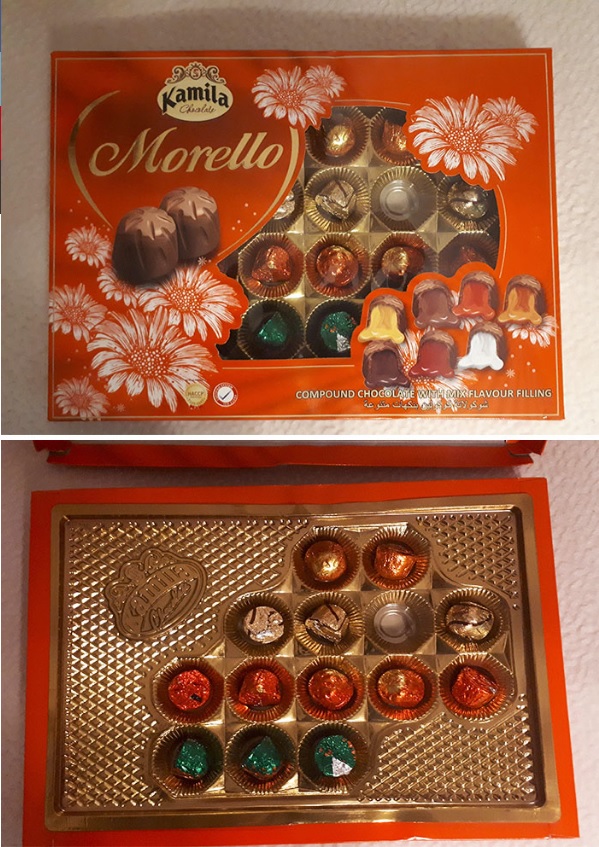 (*81 Incredibly Evil Packaging Designs That Will Seriously Infuriate You)

As long as I look at it, I can laugh a lot, but if I actually buy this product, I will get angry! Lol