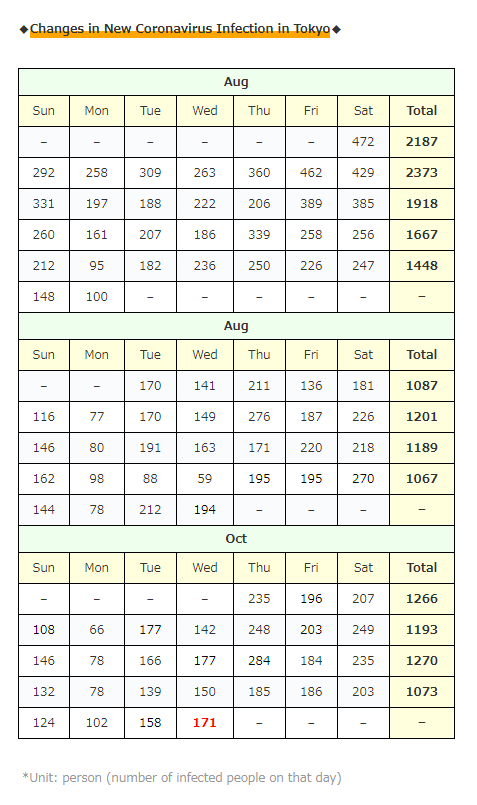 The number of newly infected people in Tokyo will continue to be high this week. ..

The number of newly infected people [171] today is higher even if you look at “Wednesday” in the last two months. 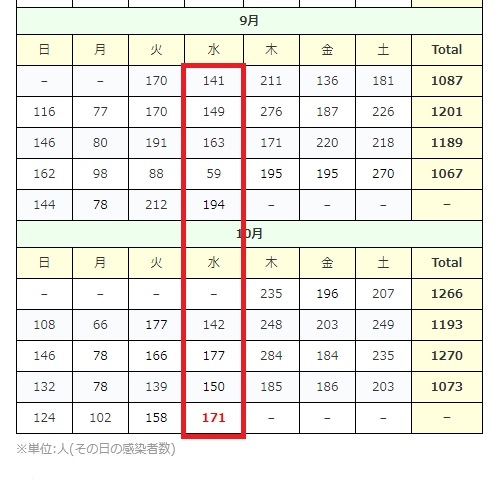 And since Monday on weekdays, there are more infected people than last week …

*Some students lived in dormitories.

* Nosocomial infections occurred from August to September. (This time in another ward)

*PCR test is being conducted on all detention centers because infection was confirmed in a man in his 30s who was detained on the 25th.

・Outbreak of restaurant outbreak with entertainment at nigiht in Susukino, Sapporo City [10] person(s)

・Outbreak of restaurant outbreak with entertainment at nigiht in Susukino, Chitose City [10] person(s)

* So far, only one person has been announced today.

(*Status up to yesterday)

There wasn’t much news about the new coronavirus (COVID-19) in Japan today, so I’ll focus on overseas topics!

The new coronavirus (COVID-19) is becoming more and more outbreaks in Japan, which makes me feel very uncomfortable, but even if I look around the world, the infection continues to spread more than in Japan …

(every day these days but) yesterday 27th, the number of new cases of new coronavirus (COVID－19) infection per day seems to have reached a record high of 20,1994,

it seems that an outbreak occurred in the House of Representatives of the Russian Parliament, and 91 out of 450 members (about 20%) were infected …

Russia is in a bad situation.

But I think that Russia has approved about two vaccines for the new coronavirus (COVID－19) …, right?

I thought … and looked it up!

the lawmaker who was vaccinated in the first place was infected …

The House of Representatives, Valerie Gartung, was confirmed to be infected on the 22nd, and was supposed to “ he is participating in a clinical trial of a vaccine under development” and said,

“Is it the real vaccine that was inoculated? I don’t know if it was a fake drug”

there is no option to have a member of the Diet inoculate the fake drug in the first place,right?

* By the way, this vaccine candidate “Sputnik V” was already approved in Russia in August (although it is in clinical trials), and President Putin’s daughter has also been vaccinated …

It seems that this vaccine candidate “Sputnik V” was said to have “suspicious research results” from the time of approval,

and it is unknown when this member was vaccinated, but I hope that the vaccines currently under development (AstraZeneca, Pfizer, etc.) will come out with materials that can confirm the effects properly!

By the way, there was news today about the vaccine candidate under development by Pfizer Inc. of the United States, and it was announced that

It’s a frustrating feeling that “the effectiveness cannot be confirmed unless a certain number of clinical trial participants are infected” even though it should have never been infected.

It’s such overseas news, but on the contrary, there was news like this today!

I introduced it in the “Summary Article” of the day before yesterday.

(From the summary article on October 26)

But there is also such news,

In Melbourne, the capital of Victoria, which was the center of the “second wave” of the new coronavirus infection （COVID－19） in Australia, the number of new infections on the 26th today is 0 for the first time since the lockdown was laid 111 days ago.

Speaking of Australia, like Japan, when it was the “first wave”, it was introduced as “the country that converged first in the world”, but also like Japan, the “second wave” arrived, and on July 1st, it seems that the number of newly infected people was over 700.

In Melbourne, where the number of newly infected people became 0 on the 26th, it seems that eating and drinking at restaurants has resumed for the first time in 3 months!

After all, it’s too enviable and enviable to say, “The relax is only after the number of newly infected people reaches 0 and it completely controlled!”

I want Japan to be controlled as soon as possible!

There are many outbreaks nationwide, and the number has increased significantly for the second consecutive day. ..

The only news in Japan today is…

Don’t you think so?

Outbreaks seem to be prevalent (← What a desperate power word .. bitter smile), so let’s really be careful about infection prevention in trains, commercial facilities, and workplaces!