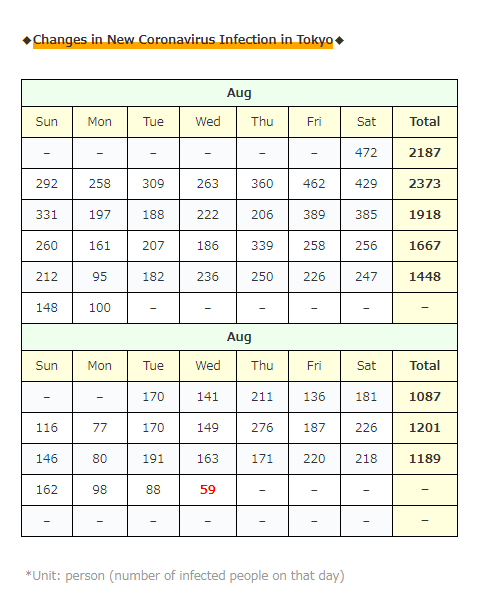 59 ( -29 from the day before) new infections confirmed in Tokyo.

The number of newly infected people in Tokyo was “less than expected” today!

However, I can’t say anything unless I wait for a week or two to see what the result of the four consecutive holidays will be, so I’m afraid …

Out of [59] new infections in Tokyo

・ The person in charge of the city said, “Until yesterday, there are few tests for 4 consecutive holidays, so the number of “59” is not helpful. People infected during the holidays will come out next week, so you need to watch carefully.”

・Mass nosocomial infection at “Ome Municipal General Hospital” in Ome City do not stop… 5 people have been confirmed to be infected today, bringing the total to 52 people…

・The “number of inspections on September 20” in Tokyo announced today was [1018] times.

→Men and Woman from The United States, The Philippine, China, Montenegro [4] persons

→Nosocomial infection at a medical institution in Handa City [1] person

This is what I should tell you today!

↑ The title of the article is scary, but the content can be summarized as follows.

According to Professor Dale Fisher, a professor of infectious diseases at the National University of Singapore,

“The effectiveness of the first vaccine approved in Europe and the United States is likely to be only 50% to 60%, and the vaccine is only one of the means to suppress the pandemic.”

To be honest, it’s hard to understand even if we read it, right? lol

“Vaccine effectiveness? How effective is the vaccine? I don’t know, but I wonder if about 50% means that vaccines don’t make much sense …?”

I’m not sure, but the usual “mysterious mission sensor” responded quite a bit, saying, “For the time being, this content must be introduced in a summary article!” (lol), so I’ve researched it ! (LOL)

The first thing I don’t really understand is “effectiveness”, but “effectiveness” is basically the “property” of “whether it works or not”, and it was not shown in %!

Instead, there is an “effective rate”, which is “the percentage of people who could be prevented from developing the disease by vaccination”, so it is probably this one.

(1) only have the effect of preventing aggravation when they develop, and

(I was surprised to find out)

In that case, if it is a new coronavirus (COVID-19) vaccine that has a preventive effect,

“Isn’t it more than enough if the“effective rate” is 50% to 60% ?! Moreover, it is at least as effective as influenza vaccination !?”

I’m starting to think that…

And as mentioned in this summary I introduced earlier,

Therefore, if 60% of the population has immunity to the new coronavirus,

herd immunity can be obtained = the new coronavirus can be controlled …!

“The effectiveness of the first vaccine approved in Europe and the United States is likely to be only 50% to 60%, and the vaccine is only one of the means to suppress the pandemic.”

The conclusion is that! (Lol)

I’m really sorry that the content became long and difficult!

I intended to introduce a simple article, but I searched for it with a super maniac!

However, it’s the exact opposite of “the direction they want to convey in the original article”,

and that article is what we have hope! lol

It was such an introduction!

↑ As is the case, there were many difficult articles today, so I’ll summarize them roughly and quickly …!

First of all, there are two articles about “Avigan”!

(1) “Abigan” is now on sale at Russian pharmacies

(although a doctor’s prescription is required)! 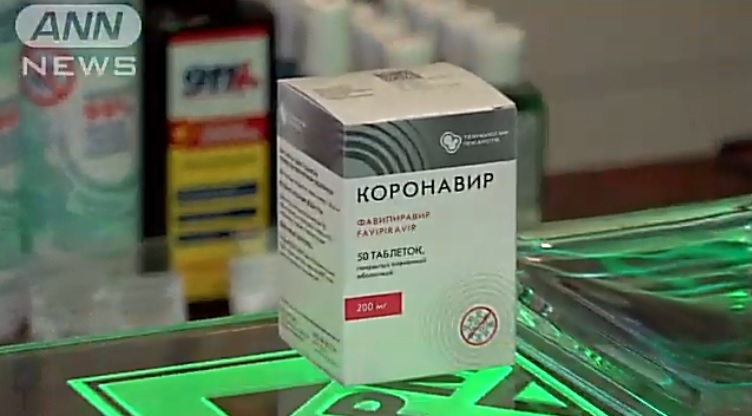 (* Although it is a generic drug of Avigan, it is expensive … bitter smile)

It has been recognized by Russia, “Abigan”!

Why isn’t it approved in Japan, the country where it was made …

(2) It seems that the “Abigan” will be applied for approval in Japan by the end of October next month!

The results of the clinical trial of 156 people aged 20 to 74 were as follows.

・ There were no side effects other than the known renal and liver dysfunction.

(* There was no new concern about safety)

is what they said!

Russia is already lined up in ordinary pharmacies… (Mumble …)

And there are two overseas topics!

August unemployment rate is 8.4% across the United States

That is said in the article…

Since the number of newly infected people per day exceeds 4000 and the infection is spreading again, it seems that new measures will be introduced.

・The restaurant will be closed until 10 pm (from September 24)

・The government was urging people to return to work on their office, but they changed their policy and requested to work from home as much as possible.

・Sports events with spectators were scheduled to be deregulated from October, but postponed.

・If this works, you may not need to lock down.

・These measures may last for “half a year”.

We still can’t feel relieved in Japan, but it’s a difficult situation overseas…

About this ↓ that I told you the other day

(From the summary on September 22nd)

According to US authorities,

“the new coronavirus can spread through droplets and fine particles in the air.”

… but
everyone know that …

Because we don’t know how long coughing or sneezing aerosols (particles that float in the air for a long time) will continue to fly, and it is said that they can reach up to 6m depending on the conditions, not just 1m, so “airborne infection” … Yeah, we know.

That’s why everyone is saying that EVERYONE have to be careful! (Angry)

I thought while reading the article. (lol)

“I have mistakenly posted the original draft of the document regarding recommendations regarding airborne infections such as aerosols. I am currently reviewing it and will announce it again when the review is complete.”

The original plan (the base of what was originally planned to be released) seems to be correct…right?

By the way, WHO (= World Health Organization) also seems to report that “evidence showing the possibility of aerosol infection is beginning to appear”.

Or rather, as a rule of thumb, we think that “airborne infection” is already common sense …

It was such a correction (?) Article!

Today is back on weekdays and more than 100 people have decreased!

Before this “new coronavirus (COVID-19) infectious disease”, it was a “craft beer boom”!

I used to go to the beer bar too (laughs)

But this time it ’s not craft beer 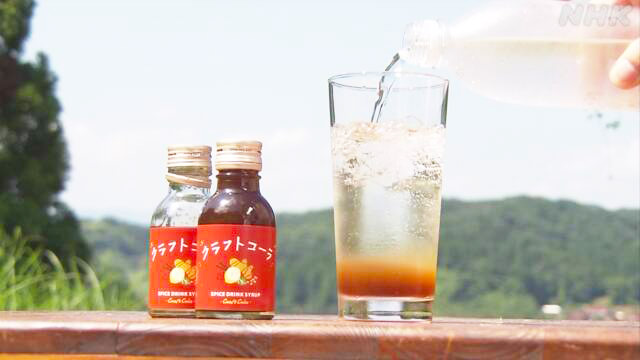 I found an article about Shimane’s “Craft Coke”!

I think the best drink in the world is cola, (lol)
so I wonder if there will be a “craft cola boom”! ??

Isn’t it? Sorry for that… Lol