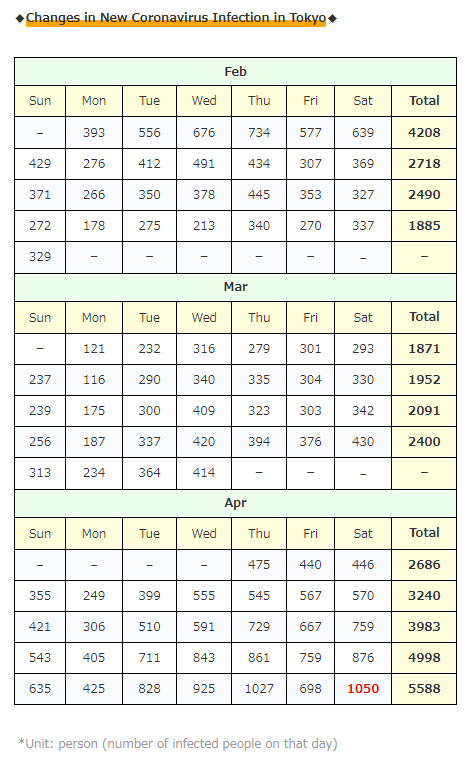 There is no doubt that the number will exceed 1,000 from here…

I just pray that it won’t accelerate from here anymore …! 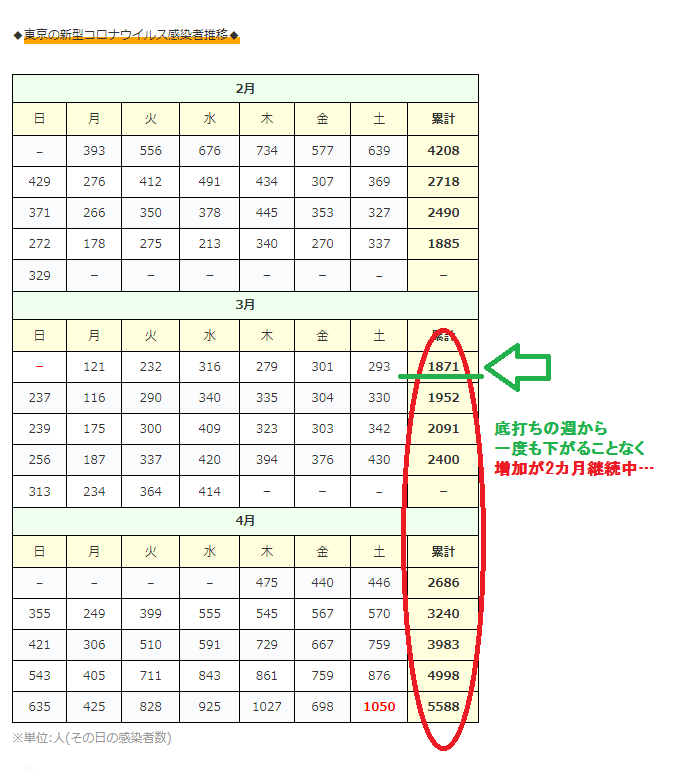 ↑↑ After bottoming out in early March, the increase never stop for a moment! 🙁 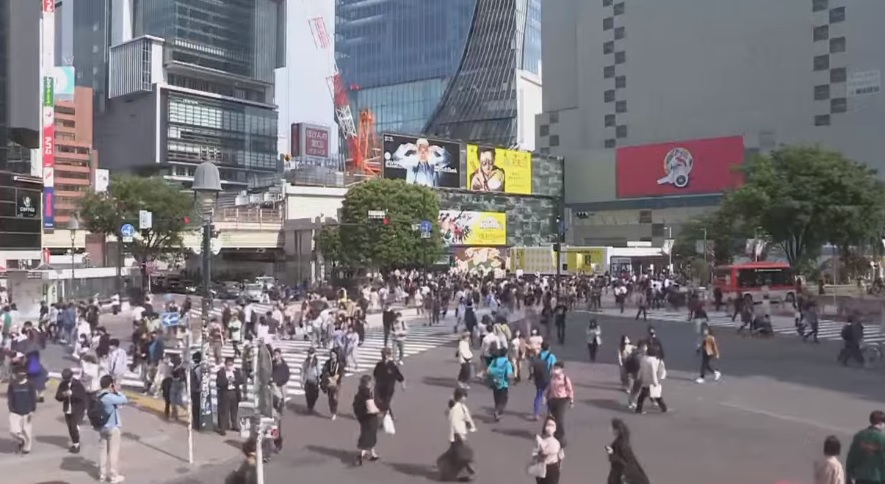 * Bringing in samples from outside of Tokyo [48 cases]

*It seems that a new cluster has been occurred below.
(details unknown)
・A total of 3 facilities including “Seibudai Chiba High School” in Noda City

*More than Tokyo for 33 consecutive days 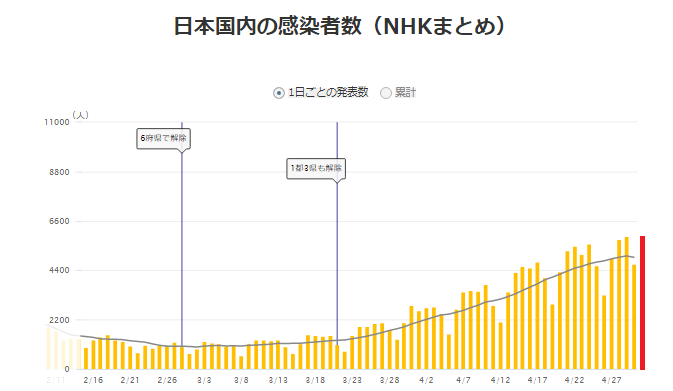 Well, it’s been a few days since the Golden Week holidays started!

It seems that politicians have already finished their work on GW’s infectious disease control.

Prime Minister Suga
“Japan will enter five consecutive holidays, but I want you to refrain from going out.”
→Just answer to reporters

Nishimura Minister for Economic Revitalization
“I would like to ask for a thorough stay home again.”
→Just ｒemarks on Nico Nico Live Broadcasting

Like them, they don’t formally appeal as the government every day, they seem to answer just because they were asked … (dry laugh) 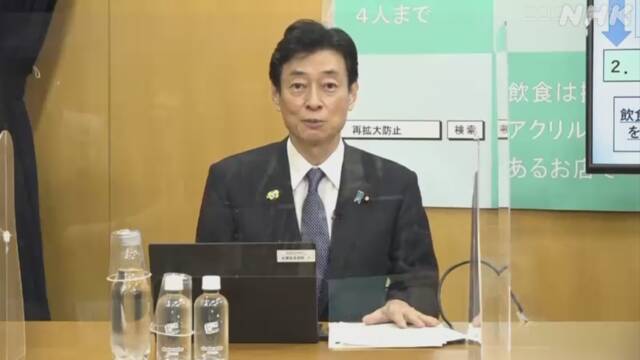 Although it is such a GW, there was such unfortunate news …!

Around this time last year, more than 700 people were infected with a super-large-scale outbreak on the luxury liner Diamond Princess, but while there are some areas in the country that have declared a state of emergency, it seems that they have decided to call at the port because an infected person came out on the luxury cruise ship “Asuka 2” that left Yokohama Port on the 29th of the day before yesterday …

I think the operating company is desperate not to go bankrupt, but considering that there were enough applications to participate so that they could decide to leave the port, the Japanese are really strange ..

By the way, in connection with the same large-scale movement of people, it seems that subsidies are actually being issued at the event, and the policy is to increase the amount …!

.. It looks pretty generous when you look at the amount, but I can’t say anything because I don’t know how much the actual cost is …!

Is it a lot or small?

And for the first time there was a decent article on whether to extend this state of emergency!

Osaka Prefecture seems to judge on May 6th or 7th after GW(Golden Week Holidays)…!

Medical institutions are also closed during the consecutive holidays, and there is no doubt that the number of infected people announced will decrease until around mid-May, but do they intend to judge in that situation …?

The first one is …

Regarding the large-scale vaccination venues scheduled to be set up in Osaka and Tokyo, it seems that Tokyo will be opened in the joint government building in Otemachi!

And the target is elderly people and people with underlying illnesses living in the four areas of Tokyo, Kanagawa, Saitama, and Chiba!

It’s a plan earlier than I expected!

By the way, it seems that Osaka is still investigating the candidate site …!

And the second one is …

When the staff collected the vaccine left in the container on Ishigaki Island, it was possible to secure it for 15 people, and it was said that the staff was vaccinated!

“That’s nice!” I thought … but apparently, “It’s no good because there is a risk of foreign matter getting mixed in!” …

However, why is the vaccine left in the container??
When I think about it … it seems that they’re using the “syringe that can only take 5 doses from container” …!

If there are other vaccination sites that use syringes that can only take 5 doses, a considerable amount of vaccine is wasted …

What the Japanese government is doing …!!! (angry)

Regarding vaccination, it’s really no good in Japan …

I tried to graph the infection rate by age in Tokyo for the first time in a while! 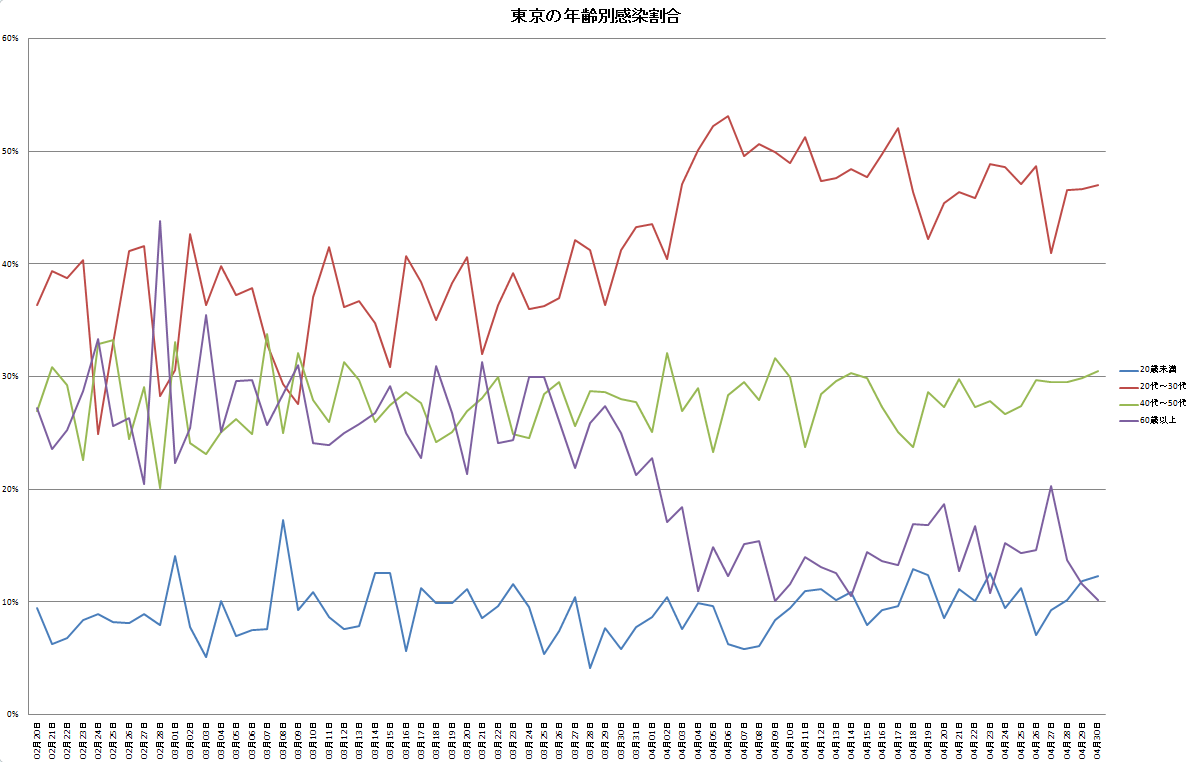 When I graph it like that, we can understand the following things well.

①The number of infected people in their 20s to 30s (red line) has increased considerably.
②40s-50s (green line) is almost unchanged
③Those in their 60s and above (purple line) are stable at the point of decrease.
④The percentage of people under the age of 20 (blue line) is increasing a little.

Other generations are almost stable, so as the government and news say, it seems that we have to manage the increase in the number of infected people in their 20s and 30s (increased proportion) …!

Well, will they have ears to hear it…